3 Note The definitions do not refer to revenues as ‘cash received’, but rather ‘inflows of economic benefits’. The benefit may be cash, but does not have to be; it could be debtors (for a credit sale) or some other asset such as stock (for a stock gain). In the case of discount revenue, the benefit is actually a reduction in an outflow, where no cash flow. Expenses should be recognised when the economic benefit is consumed (or incurred), not when the cash is paid. When we speak of determining profit, we are actually comparing the revenue earned in the current Reporting period against the expenses incurred in the current Reporting period.

6 Types of BDA’s The balance day adjustments to be covered in this unit refer mainly to expenses (with stock gain being the obvious exception), and include: • stock losses and gains (covered in Chapter 8) • prepaid expenses • depreciation (to be covered in Chapter 11) • accrued expenses Other adjustments – relating to revenue accounts – will not be examined until second semester and so are covered in later chapters.) These balance day adjustments must be recorded in the General Journal before being posted to the General Ledger accounts.

8 Prepaid Expenses Frequently, an amount will be paid for an expense that is not consumed at the time the payment is made. For instance, when rent or insurance are paid they are usually paid in advance, covering the next month, or perhaps even the forthcoming year. The same could be said for supplies and materials (such as stationery), which are purchased in bulk, but are not used up immediately. These are common payments, but at the time they are paid, should we consider them to be expenses? Consider the definition of an expense – it refers to a consumption or outflow of economic benefits. Yet at the time the amount is paid, how much of the rent, insurance or office supplies has been consumed? The answer is, obviously, none! In fact, each will not be consumed until some time in the future; they are not consumptions of economic benefits, but rather future economic benefits. In other words, they are assets.

9 Prepaid Expenses When an expense is paid in advance, it should properly be recorded as a current asset called Prepaid expense (in this case, Prepaid Rent, or Prepaid Insurance, or Prepaid Office Supplies). When an expense is prepaid, it must be recorded as such in the journals and ledger accounts. Refer Cash Payments Journal & General Ledger pp Don’t forget GST is treated separately.

10 Adjusting for the consumption of a prepaid expense
Prepaid expenses are recorded as current assets because at the time of payment, none of the amount has been consumed – it is all a future economic benefit. However, by the time balance day arrives (the day on which the ledger is closed and reports are prepared) at least part of this prepaid expense is likely to have been consumed. In other words, part of the asset has become an expense. It is therefore necessary to adjust the ledger accounts so that: the amount consumed (i.e. used up) in the current Reporting period is shown as an expense. the Prepaid expense account only shows the amount remaining (i.e. unused, or to be used up in a future Reporting period).

11 Adjusting for the consumption of a prepaid expense
Calculate the amount consumed/used up/incurred – this is the amount to use in the adjustment. See Figure 10.2 p The General Journal entry debits the Insurance expense account to recognise the expense incurred in the current Reporting period, while the Prepaid insurance account is credited to reduce the current asset by the amount consumed. See also General Ledger entries. Note this adjustment does not change Bank, nor does it affect GST Clearing.

14 Accrued Expenses Prepaid expenses are paid before they are consumed. However, it is also likely that some expenses will be paid after they are consumed. For example, at balance day there may be wages owing to employees for work that has already been done, or electricity that has been consumed but not paid for. Because this amount has already been incurred – in the language of the definition, consumed in the current Reporting period – it must be recognised as part of the expense amount. In addition, the amount owing should also be recorded as a liability. The amount still owing for an expense that has already been consumed is called an accrued expense.

15 Accrued Expenses It is therefore necessary to adjust the ledger accounts so that: the extra amount consumed (i.e., used up) in the current Reporting period is added to the expense account a current liability account – Accrued expense – is created to show the amount owing/unpaid (which will be paid in the next Reporting period).

17 Accrued Expenses See also General Ledger entries.
Note: The amount used in the adjustment ($300) is not the total expense for the period, it is simply the amount that has been consumed but not yet paid. It is added on to the amount paid to calculate the total expense.

21 Note Not all expenses incur GST; when paying a non-GST item (like Wages or Interest expenses) in a subsequent period, it will not be necessary to account for the GST. 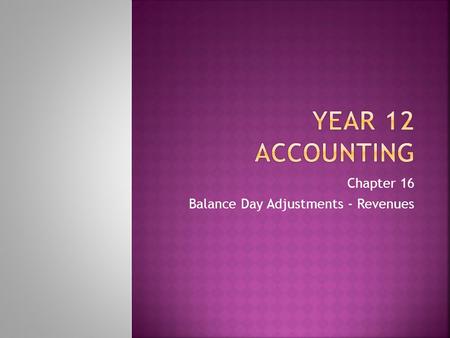 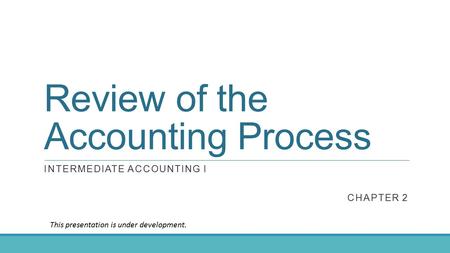 Review of the Accounting Process INTERMEDIATE ACCOUNTING I CHAPTER 2 This presentation is under development. 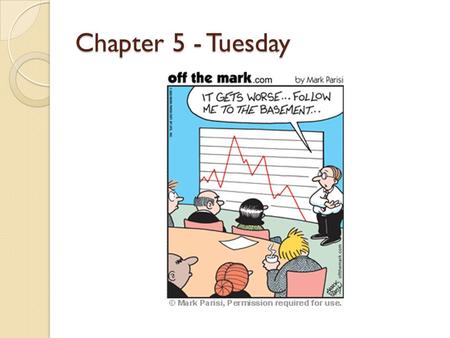 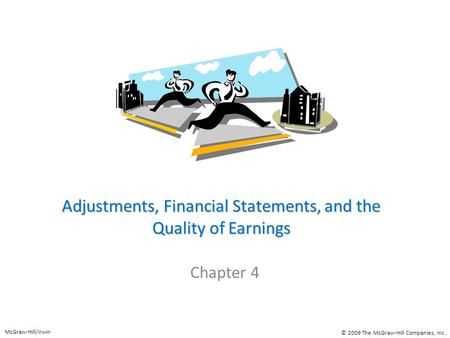 Adjustments, Financial Statements, and the Quality of Earnings 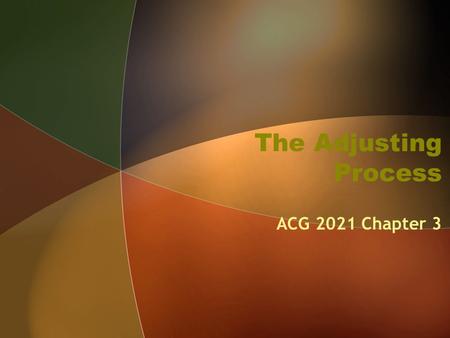 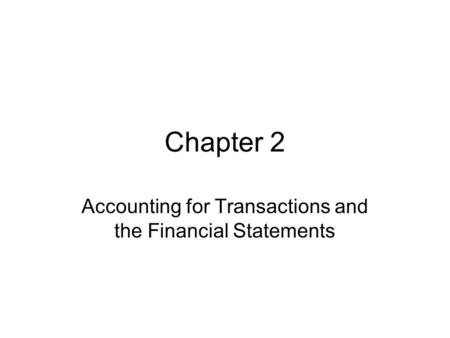 Accounting for Transactions and the Financial Statements 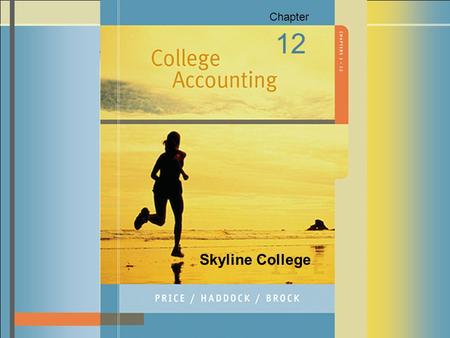 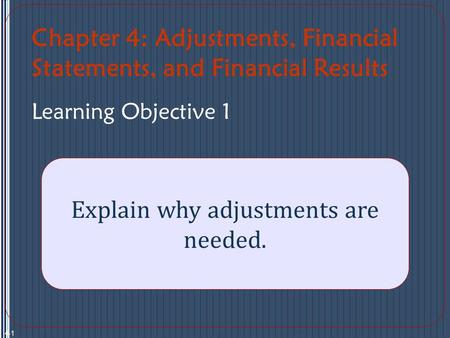 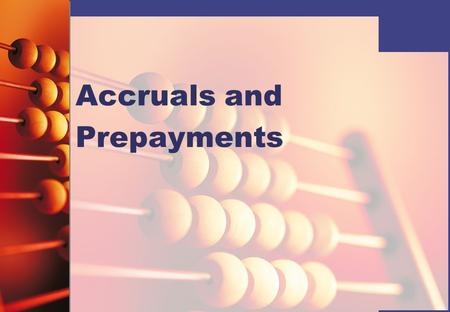 Accruals and Prepayments. Accruals and prepayments Before we prepare the final accounts of a business it is often necessary to adjust the figures in the. 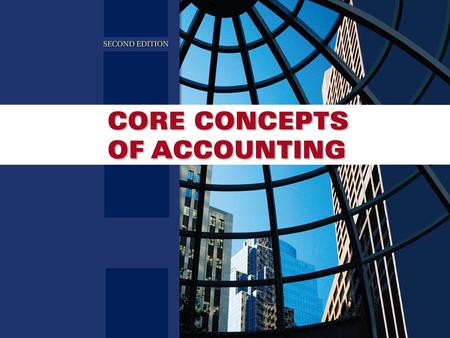 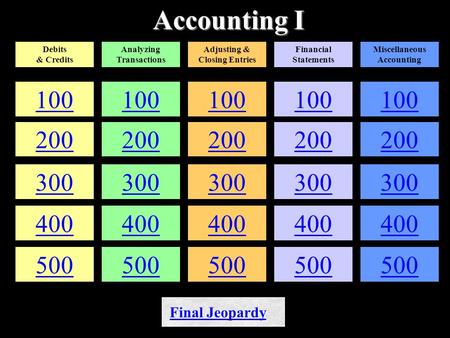 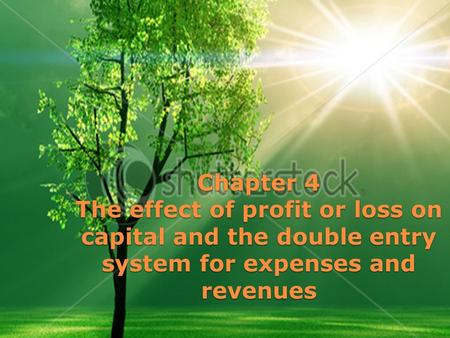 Chapter 4 The effect of profit or loss on capital and the double entry system for expenses and revenues. 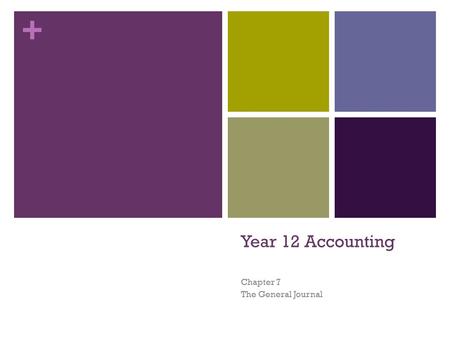 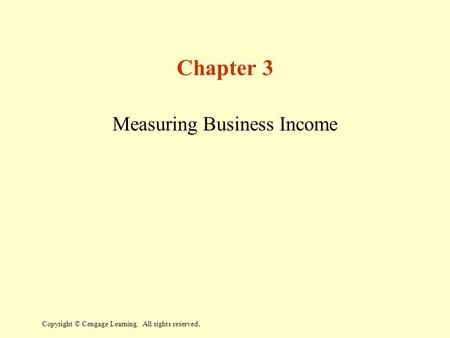 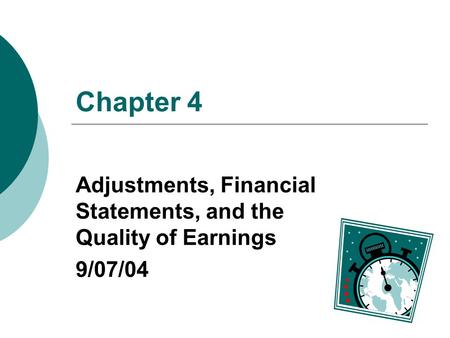 Chapter 4 Adjustments, Financial Statements, and the Quality of Earnings 9/07/04. 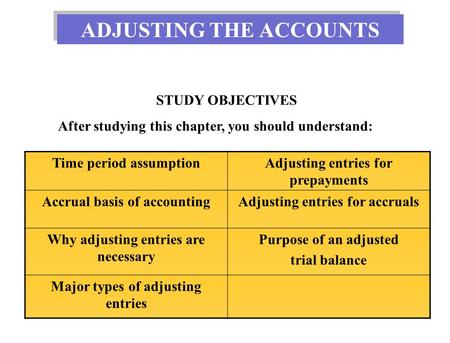 STUDY OBJECTIVES After studying this chapter, you should understand: Time period assumptionAdjusting entries for prepayments Accrual basis of accountingAdjusting. 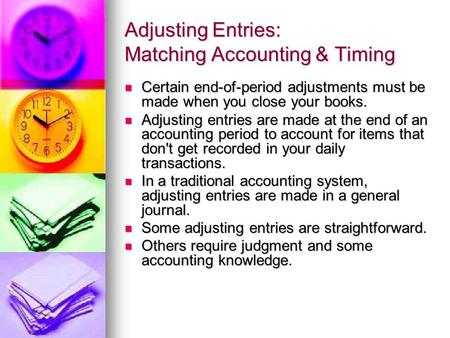 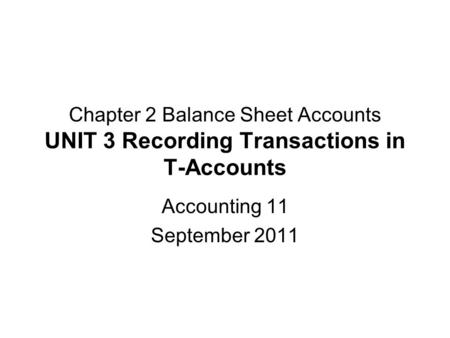 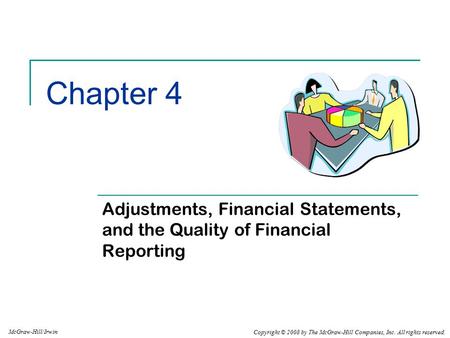 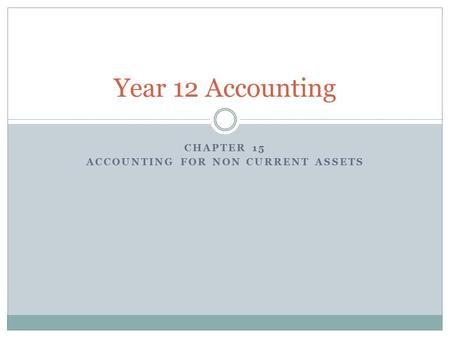