2 Introduction FAAS, developed in the 1950s, is a common method of quantitative analysis of many elements FAAS is extensively used to determine trace quantities of elements in biological, environmental, clinical, geological, and edible samples. –Elemental health hazards can be detected with 0.0331% error.

3 Theory of Operation Structure of an atom –Atoms consist of a nucleus and electrons. The nucleus contains protons and neutrons. The negatively charged electrons are located in orbitals around the nucleus. –When electrons occupy the innermost available orbital, their energy is at a minimum (ground state).

4 Theory of Operation, continued When atoms are subjected to heat or some form of EMR, one or more electrons jump to a higher energy level, leaving a vacancy in the inner shell We say the electron is excited As this happens, energy is absorbed

5 Theory of Operation, continued When the excited electron in the outer orbital returns to the lower energy level of the inner, vacant orbital, energy is released in the form of a photon

6 Theory of Operation, continued Because the atoms of each element have a different electronic structure, each one emits light of different wavelengths In FAAS, the concentration of an element present in a sample can be measured by noting the absorbance caused by the excited sample

8 Instrument Design: Acetylene Acetylene is a flammable, compressed gas that is used as a fuel for FAAS. During FAAS operation, the valve connected to the acetylene cylinder is opened completely. Storing the tank in a lab can be extremely dangerous. That is why the tanks are supported upright with a metal chain.

9 Instrument Design: HCL The HCL is a glass tube filled with an inert gas (neon, argon, or helium) and the pure element to be subjected to FAAS. The atoms of the element become ionized and excited when the FAAS is on.

10 Instrument Design: HCL The spectrum emitted by the HCL corresponds to the element in the cathode For example, if a Cd HCL is used, the characteristic wavelengths of Cd are emitted

11 Do you recall emission spectra from general chemistry?

14 Instrument Design: Burner Head The burner head is made of titanium This is where the sample atoms are excited

15 Instrument Design: Nebulizer The nebulizer changes liquid sample to a mist This arrow is pointing to the nebulizer

16 Instrument Design: Flame The flame is ignited by pushing the red burner button on the instrument The maximum temperature of the air-acetylene flame is 3,095°C

17 Typical Units of Concentration Parts Per Million (ppm) A unit of concentration often used when measuring levels of pollutants in air, water, body fluids, etc. 1.00 ppm is equal to 1.00 mg/liter And 1.00  g/mL

19 Preparation of Standards Typically 4-5 standards and a blank are prepared to construct a calibration curve (a/k/a a standard curve) –When preparing your solutions, think about the need for precision, low contamination, and minimal waste –Standard solutions should be prepared using appropriate glassware and distilled water Consult a reference to determine appropriate concentrations of standards for a given element

20 Constructing a Calibration Curve As with other analytical techniques, FAAS requires careful calibration The absorbance of the standards are plotted versus concentration The plot often deviates from a straight line

22 Operation Open the valve on top of the acetylene cylinder completely. Turn on the exhaust vent using the switch on the hood. Turn on the workstation connected to the FAAS. Load the FAAS software.

23 Operation: Optimization Only a few steps are required for optimization –The software steps you through the optimization, because a method has already been created for doing so After optimization, you are now ready to start the analysis

24 Analysis Again, the software leads you through the procedure Sequentially aspirate the blank (distilled water), the calibration standards, and the samples

25 Evaluation of Results After the analyses are complete, look at the calibration curve printed out by the FAAS system’s printer

26 Limitations of FAAS The chemical form of the analyzed element is not detected –For example, if copper was being analyzed, all that would be known is how much copper is present. –It would not be known if it is copper(II) cyanide, copper(III) sulfate, etc. The preparation of the standards and samples can be time consuming The whole FAAS procedure requires detailed work Some elements cannot be examined by FAAS The FAAS procedure destroys the sample 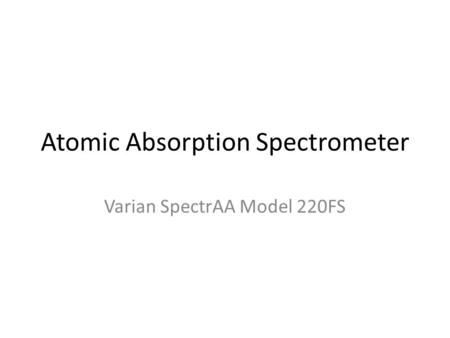 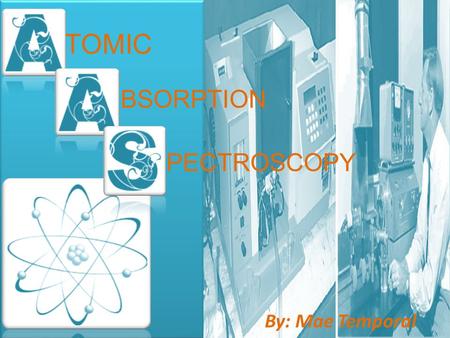 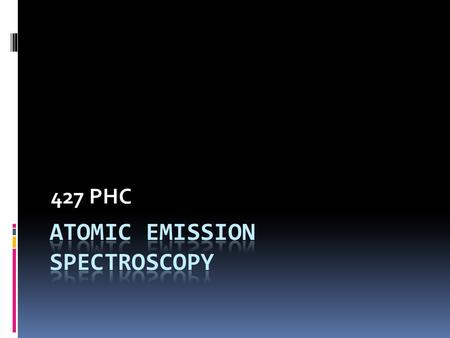 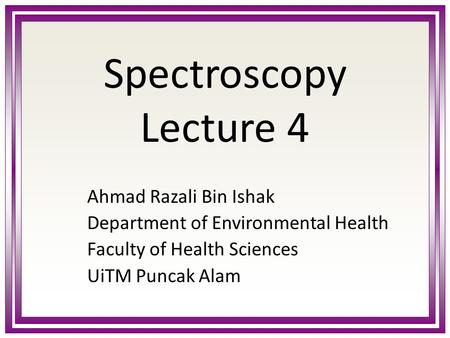 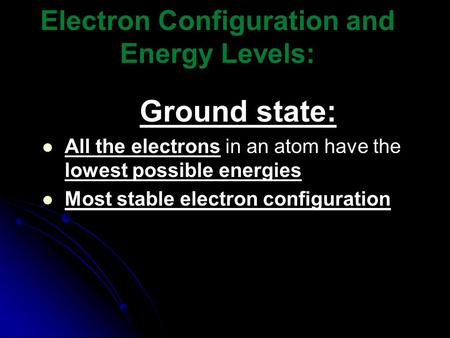 Electron Configuration and Energy Levels: Ground state: All the electrons in an atom have the lowest possible energies Most stable electron configuration. 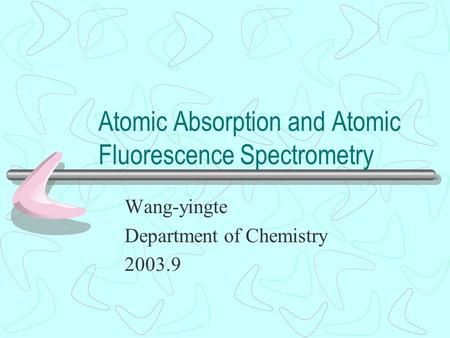 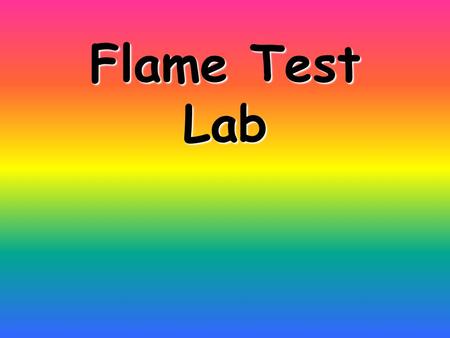 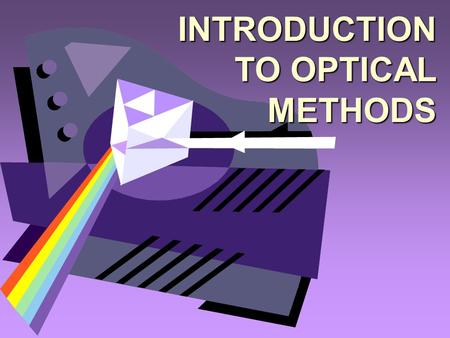 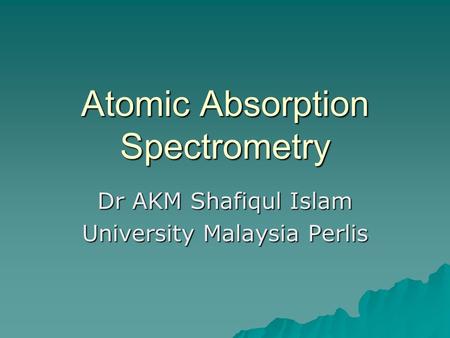 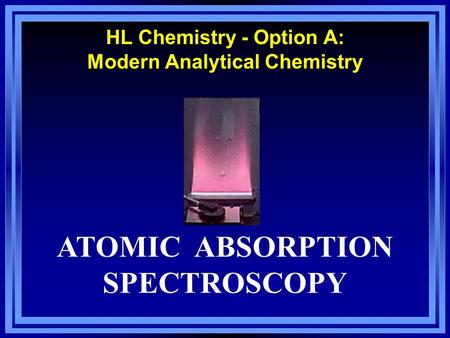 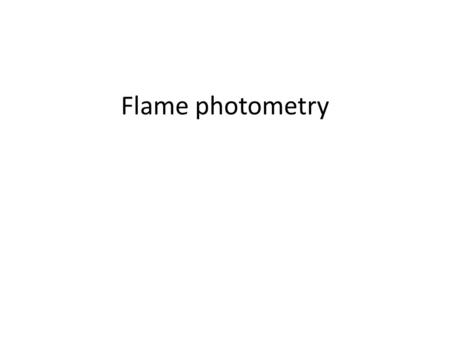 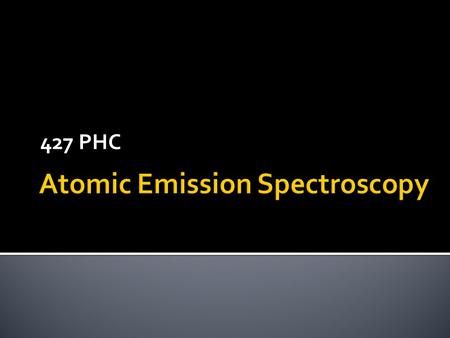 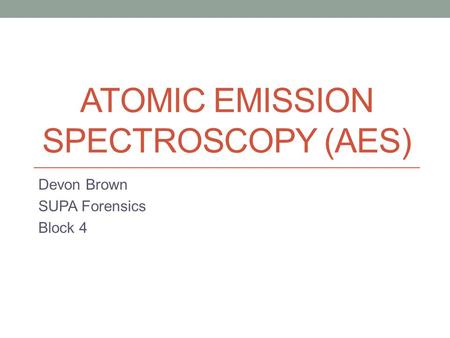 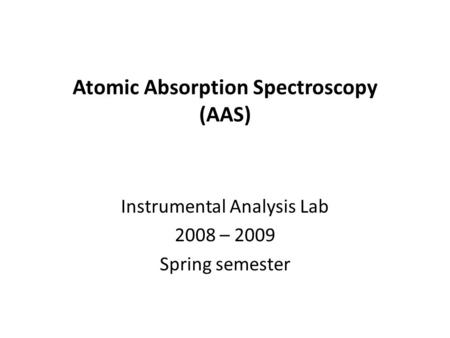 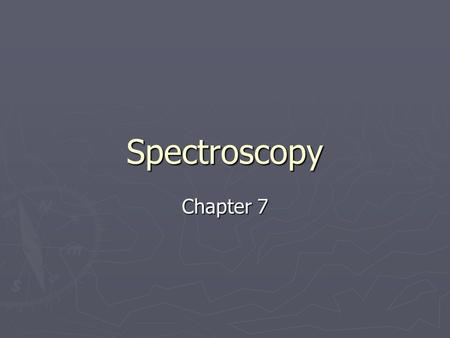 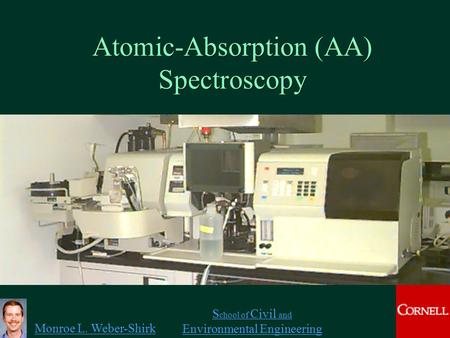 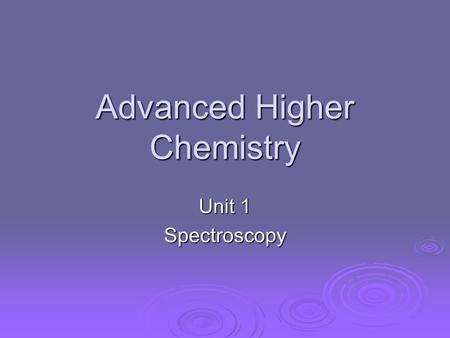 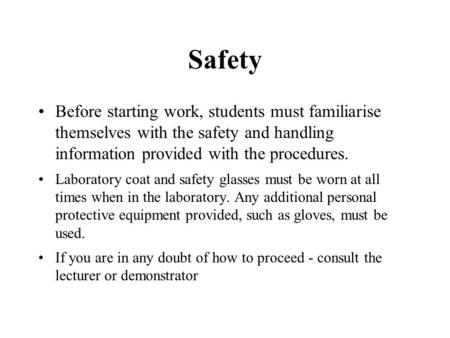 Safety Before starting work, students must familiarise themselves with the safety and handling information provided with the procedures. Laboratory coat.