2 Federal Courts Two kinds of civil lawsuits permitted in Federal Courts - Federal Question Cases A claim based on the United States Constitution, a federal statute, or a federal treaty Diversity Cases When the plaintiff and defendant are citizens of two different states, AND the amount in dispute is greater than $75,000

3 Federal Court System Trial Courts Appellate Courts
United States District Courts are the primary trial courts in the federal system. The nation is divided into about 94 districts (based on population), each with its own District Court. There are also specialized trial courts, such as Bankruptcy Court and Tax Court. Appellate Courts United States Courts of Appeals are the intermediate courts of appeals. The nation is divided into thirteen circuits. The highest appeals court is the United States Supreme Court.

6 Federal Forums of Limited (Specific) Jurisdiction
Bankruptcy Court, Tax Court, Court of International Trade, Patent and Trademark Court - These trial courts in the federal system hear cases appropriate to their names (tax cases in the Tax Court, etc.) Appeals from the Bankruptcy and Tax Courts are heard by the Court of Appeals in the appropriate circuit. Appeals from the Court of International Trade and the Patent & Trademark Court are heard by the Court of Appeals in the Federal Circuit. U.S. Court of Claims - Hears cases brought against the United States, typically on contract disputes. Various Federal Agencies - Though not actually a part of the Judicial Branch of the Federal government, many Federal agencies have the power to create and enforce appropriate regulations.

7 State Court System Trial Courts Appellate Courts
Almost all cases begin in trial courts, with a judge and usually a jury. Trial courts determine the facts of a particular dispute and apply the law to those facts. Courts can only hear cases under their jurisdiction. Appellate Courts Appeal courts generally accept the facts given to them by trial courts and just review the trial record to see if the court made any errors of law. The highest appeals court in a state is the state Supreme Court.

13 Alternative Dispute Resolution (most common forms)
Negotiation Parties make offers and counter-offers for settlements. May be face-to-face or through lawyers. Mediation Neutral person (mediator) attempts to get parties to reach a voluntary settlement. Mediator does not render a decision. Arbitration Neutral person (arbitrator) is involved. Arbitrator often has expertise in area of dispute. Arbitrator renders a binding decision. Arbitration may be mandatory, if chosen in advance as the method for dispute resolution.

16 Steps in Beginning Litigation
Pleadings: Papers that begin a lawsuit 1. Complaint Short, plain statement of the allegations and the legal claims. This is “served” or delivered with a summons. 2. Answer A brief reply to the allegations. 3. Counter Claim Sometimes the accused party will initiate a second suit in response to the first. 4. Reply A brief reply to the counter-claim.

17 Possible Variations on Pleadings
Class Actions If the plaintiff has evidence that the wrong in question has affected a large number of unrelated persons, the suit may become a class-action suit, with the plaintiff representing an entire class of plaintiffs. Default Judgment If the defendant fails to answer in time, the plaintiff will ask for a default judgment, meaning an automatic win without a trial.

18 Example of a Complaint

19 Discovery -- next step after pleadings
Allows both sides to uncover evidence, encouraging a settlement or ensuring few surprises during a trial. Interrogatories -- written questions that the other party must answer, under oath Depositions -- interview (under oath) of other party or potential witnesses; done by opposing lawyer Production of Evidence -- each side may request to see the other side’s evidence Physical or Mental Exams -- one party may request the court to order an examination of the other party if relevant

20 Discovery (cont’d) Sometimes the results from interrogatories and depositions will cause one side or the other to file a motion in response. Motion to compel answers to interrogatories – may be made if one side thinks the other has not adequately answered interrogatories Motion for protective order – is a request to the court that the other side be made to reduce the number of depositions.

22 Other Steps Before Trial
Summary Judgment -- a ruling by the court that no trial is necessary because there are no essential facts in dispute; may be requested by either side. Final Preparation -- if the case is to proceed to trial, both sides make a list of witnesses and rehearse questions with their own witnesses. Preparation is allowed, but telling the witnesses how to answer is not legal or ethical.

24 Adversary System The adversary system presumes that the truth will be found if lawyers are allowed to question witnesses for both sides. Both the plaintiff and the defendant have the right to request a jury trial, but only in those criminal cases which may result in the death penalty or incarceration for a period of greater than six months is there an absolute right to a jury trial.

25 Procedural Rules for a Trial
Burden of Proof The plaintiff must convince the jury that its version of the case is correct. In a civil case, the proof needs to be by a preponderance of evidence (meaning at least slightly more likely to be true). In a criminal case, the proof required is higher; it must be beyond a reasonable doubt.

26 The Plaintiff’s Case Opening Arguments Plaintiff Calls Witnesses
This is a brief summary, given by each side, of the facts they hope to demonstrate. Plaintiff Calls Witnesses Questions to own witnesses is direct examination. Lawyer only asks questions with helpful answers. Defendant Questions Witnesses Questions to opposing witnesses is cross examination. Again, lawyer asks questions with helpful answers. Defendant Moves for Directed Verdict This is asking the judge to decide that the plaintiff has no case worth proceeding with.

28 After Both Sides Rest (Finish)
Jury Instructions The judge instructs the jury to evaluate the case solely on the facts of the evidence presented. If the case is influenced by a certain legal presumption, the judge will summarize that for the jury. Deliberation and Verdict The jury discusses the case for as long as needed (anywhere from less than an hour to several weeks). Sometimes the jury must be unanimous; other times only a majority (at least 7) or a 10-2 vote is required.

29 The Trial is Over… or is it?
Motions after the Verdict The loser might request the judge to overturn the verdict on a legal technicality or on a claim that the jury ignored the evidence. Appeal The recourse for the loser is to file an appeal, a request for a higher court to examine the facts. The appeals court may affirm the verdict, modify the award, reverse and remand (send it back to trial) or simply reverse (overturn) the lower court’s verdict. Settlement At any point, either side may offer to settle the case, even between the verdict and the beginning of an appeal.

30 Quiz Matching Questions
Arbitration Diversity Jurisdiction Mediation Interrogatories Deposition 1.  A pretrial procedure involving written questions to be signed under oath. 2.  A form of ADR in which the parties themselves craft the settlement. 3.  A pretrial procedure involving oral questions answered under oath. 4.  The power of a federal court to hear certain cases between citizens of different states. 5.  A form of ADR that leads to a binding decision.

31 Quiz True/False Questions
One advantage of arbitration is that it provides the parties with greater opportunities for discovery than litigation does. In the United States there are many separate courts, but only one court system, organized as a pyramid. If we are listening to witnesses testify, we must be in a trial court. About one-half of all lawsuits settle before trial. In a lawsuit for money damages, bot the plaintiff and the defendant are generally entitled to a jury. F T F F 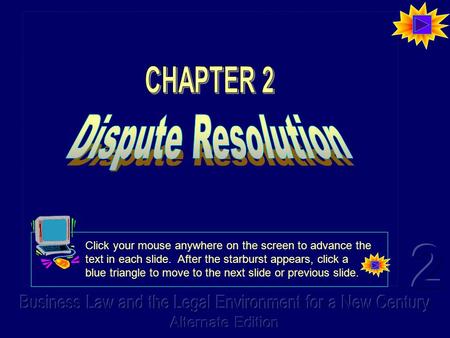 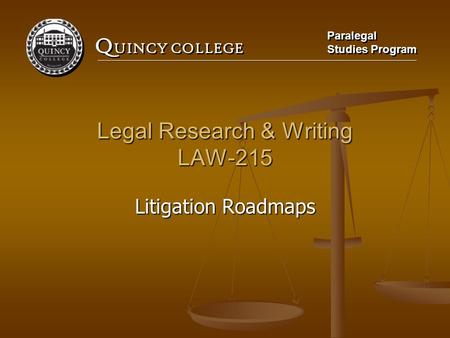 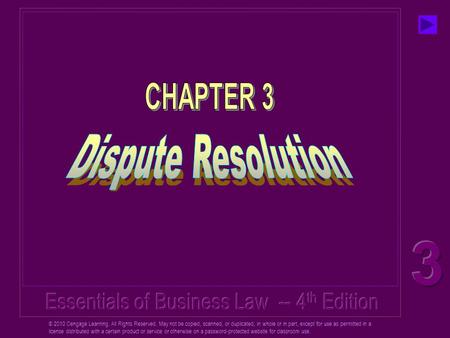 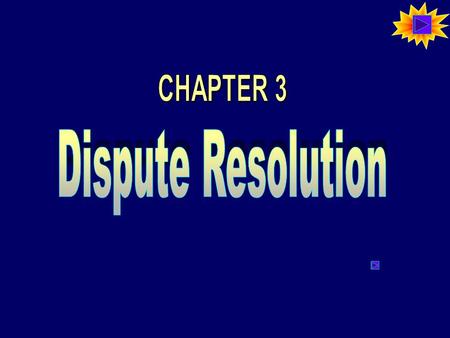