In the past few years the usage of conformal and IMRT treatments has been increasing rapidly. These treatments employ the use of tighter margins around.

Presentation on theme: "In the past few years the usage of conformal and IMRT treatments has been increasing rapidly. These treatments employ the use of tighter margins around."— Presentation transcript:

1 In the past few years the usage of conformal and IMRT treatments has been increasing rapidly. These treatments employ the use of tighter margins around a target volume and increase the need for the minimization of patient positioning and setup errors. The use of Image Guided Radio-Therapy (IGRT) along with radio-opaque markers implanted in a target volume for prostate treatments or the use of bone anatomy in brain patients allow for an unprecedented degree of precision. Patient positioning with IGRT is necessary in these cases to ensure proper target volume coverage and to reduce toxicity to nearby critical volumes. Orthogonal kV-kV matching using Varian’s On Board Imaging (OBI) and cone beam computed tomography (CBCT) are two methods of IGRT used in our clinic. OBI allows for patient positioning by using information from two orthogonal images taken in treatment position and comparing them with digitally reconstructed radiographs created from the treatment plan. This is also sometimes referred to as 2-D matching. With CBCT (3-D matching) matching, a kV CT image is acquired with the patient in treatment position and volumetric matching is done comparing the acquired CT with the planning CT. Matching is possible on the sagittal, axial, and coronal planes. The purpose of this study was to evaluate the ability of kV-kV orthogonal radiograph matching using an on board imager (OBI) and linac based cone beam computed tomography (CBCT) to accurately detect sub-centimeter offsets during IGRT involving bony anatomy of the head as a reference. Evaluation of the Abilities of kV-kV Radiographic Matching and CBCT Matching to Detect Known Offsets Tomi Ogunleye, M.S., Ian Crocker, M.D., and Eric Elder, Ph.D. Department of Radiation Oncology, Emory University School of Medicine, Atlanta, Georgia A CIRS Radiosurgery Head Phantom containing bone and soft tissue equivalent materials was mounted to a Newport 460P XYZ micrometer stage with sub-millimeter indexing accuracy in all three orthogonal directions. This system in turn was attached firmly to the linac treatment couch. Orthogonal OBI kV radiographs and the couch lateral, longitudinal and vertical drives were used to position the phantom to a starting position in agreement with a CT simulator produced digital reconstructed radiograph. A CBCT was performed to confirm proper initial alignment at the treatment position. Once this initial position was found, the linac couch was locked to prevent any further motion. Thirty- one random offsets in the x, y and z directions were generated using a Microsoft Excel spreadsheet. The shifts were limited to ±1.0 cm in any one direction from the initial setup position. The offsets were performed with the stage micrometers. After the application of each offset, orthogonal radiograph and CBCT alignment procedures were followed and performed by a user blinded to the offset values. At no time were the calculated shifts applied to the phantom. INTRODUCTION MATERIALS & METHODS Table 1: Listing of differences on each axis and corresponding vector magnitude between the applied random offset and the respective shift made by OBI and CBCT. Based on our tests, CBCT was slightly more accurate than kV- kV matching in generating shifts that corresponded with the random offsets applied to the phantom. Both systems differed from the known offset by an average magnitude greater than 1.0mm. This may be in part due to the fact that the smallest shift in any direction possible with these two systems is 1.0mm. There is also some uncertainty built in due to the subjectivity of performing some of these matches. In this case we did not observe a difference between the auto-matches performed by the system and a user manual match. Further tests will include a third, objective electromagnetic localization system to determine the offsets. CONCLUSION The known offsets were compared to the values of the kV-kV match and the CBCT match. The kV-kV alignment differed from the known offset by a magnitude of 1.7 ± 0.6 mm averaged over 31 measurements. The same comparison using CBCT revealed a difference magnitude of 1.5 ± 0.7 mm. Evaluation of all 93 pairs of OBI and CBCT shifts made for each random offset, 46 (49%) of them were equal, 44 (47%) of them differed by 1.0mm and 3 (3%) were different by 2.0mm. None were greater than 2.0mm. Figure 1: The CIRS Head Phantom and Newport 460 XYZ Micrometer on the treatment couch. RESULTS (cont.) ♦ American Society for Therapeutic Radiology and Oncology (ASTRO) – Boston, MA – September 21 - 25, 2008 ♦ Figure 2: OBI Matching interface. On the overlay, the DRR is shown in green and the acquired kV image in red. Figure 3: CBCT Matching interface. On the overlay, the planning CT is shown in red and the acquired CBCT image in green.

Download ppt "In the past few years the usage of conformal and IMRT treatments has been increasing rapidly. These treatments employ the use of tighter margins around." 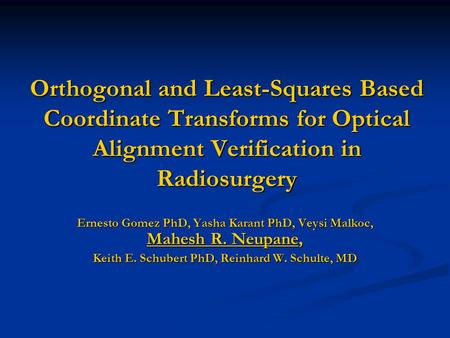 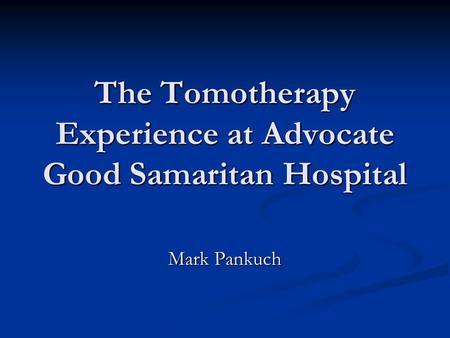 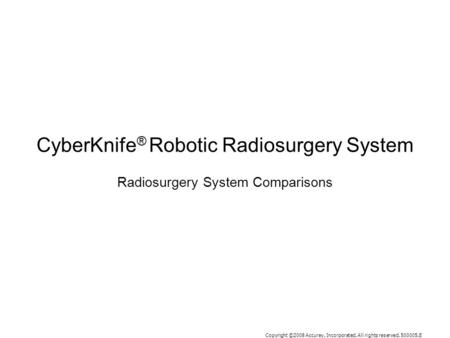 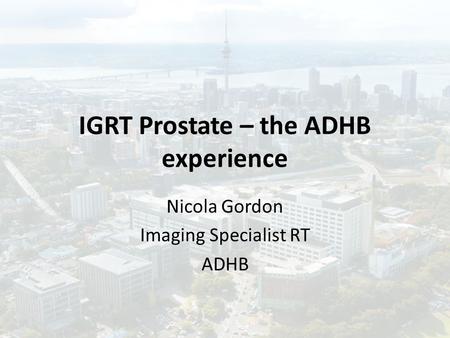 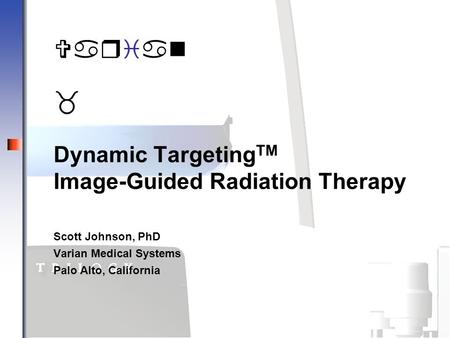 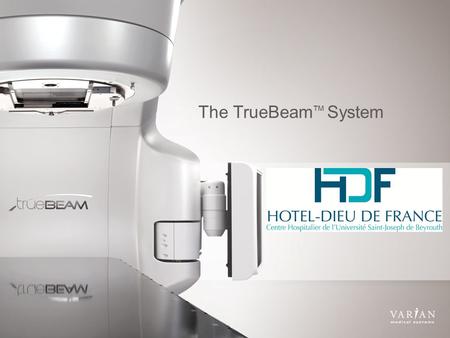 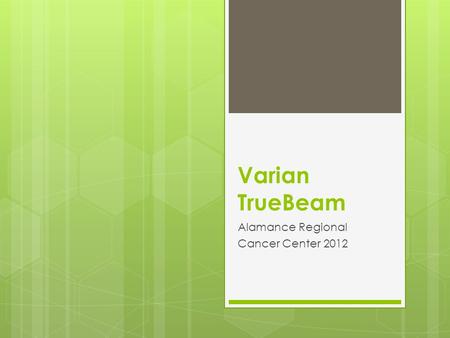 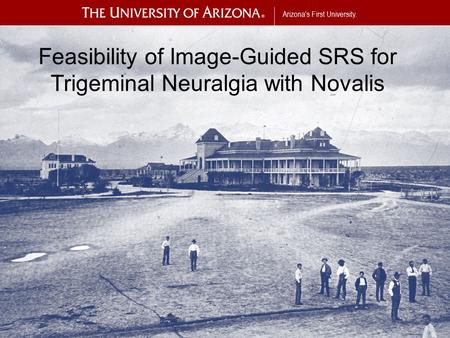 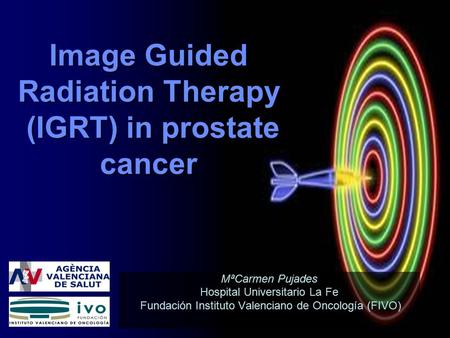 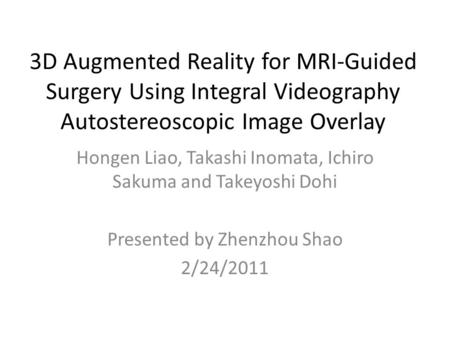 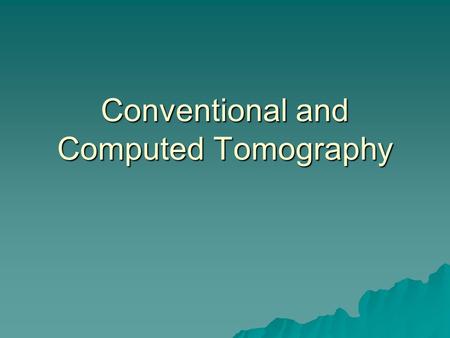 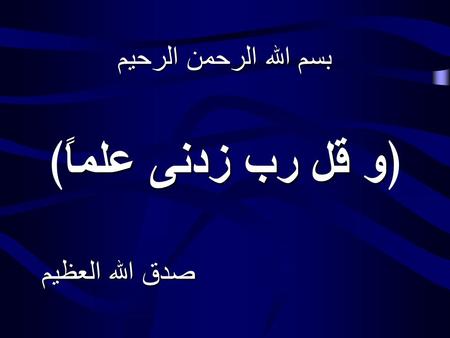 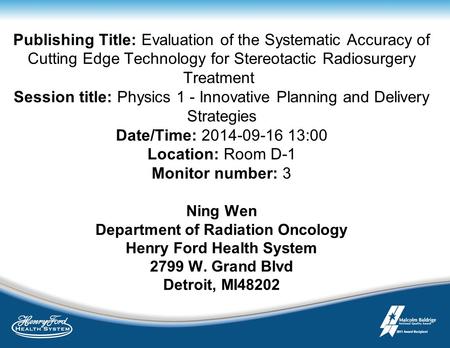 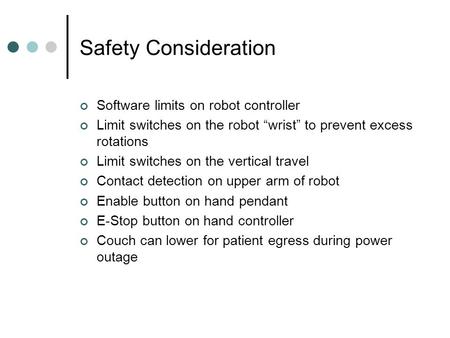 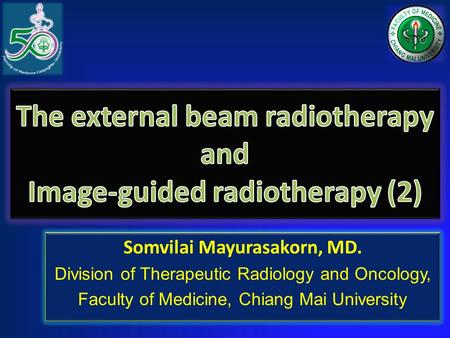 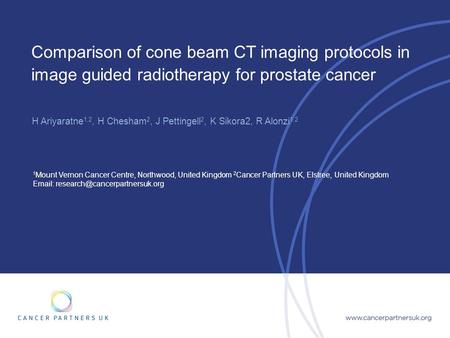 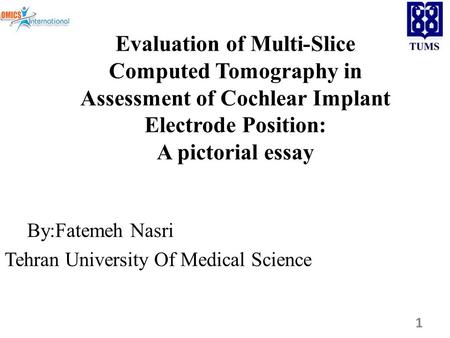 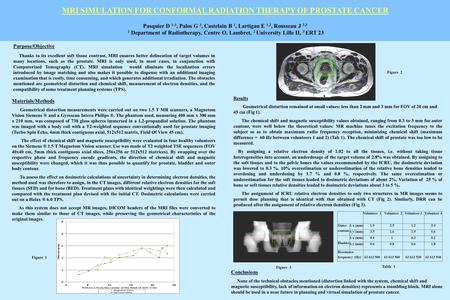