4 I. International Trade (pages 732–734)
A. The economic principle of comparative advantage says that each country should produce those goods it can make more efficiently and purchase those goods that other nations produce more efficiently; nations also trade to obtain goods and services that they cannot produce, and to create jobs. B. Governments limit or control international trade using barriers such as tariffs, quotas, non-tariff barriers, and embargoes; countries may also engage in unfair trade practices such as dumping. Section 4-2

5 I. International Trade (pages 732–734)
C. Economists look at a nation’s balance of trade—the measure of the entire flow of money in and out of a country—to measure a nation’s overall performance in the global economy. Section 4-3

7 II. Trade Agreements (pages 734–735)
A. Over 100 nations have signed the General Agreement on Tariffs and Trade (GATT) since it was first enacted in 1947 in an effort to reduce trade barriers. B. In 1994 GATT was replaced by a regulatory body known as the World Trade Organization (WTO), which hears complaints brought to it by member countries and has the authority to penalize nations that violate the GATT treaty. Section 4-5

8 II. Trade Agreements (pages 734–735)
C. The European Union (EU), currently made up of 15 European nations, is the world’s most important economic group; the EU achieved monetary integration with the adoption of the euro in 2002. D. In signing the North American Free Trade Agreement (NAFTA), the United States, Canada, and Mexico agreed to reduce and eventually end most trade restrictions among their nations. Section 4-6

10 III. Trade Alternatives for the United States (pages 735–736)
A. A pure free-trade policy would mean that businesses in different nations could buy and sell goods with no tariffs or other limitations of any kind. B. The goal of a fair trade policy is to create an orderly world market that does not give an unfair advantage to countries that use unfair business practices. C. With managed trade, government intervenes in trade arrangements in order to achieve specific results. D. Protectionism is the policy of using trade barriers to protect domestic industries from foreign competition and to prevent unrestricted trade. Section 4-8

11 III. Trade Alternatives for the United States (pages 735–736)
What challenges does globalization present to the American economy? Answers may vary but should include: the American worker must now compete with a much larger labor pool; economic and political decisions are now more complicated. Section 4-9

13 Checking for Understanding
Match the term with the correct definition. ___ comparative advantage ___ tariff ___ quota ___ trade bloc C D B A A. a group of nations that trade without barriers such as tariffs B. limit on the quantity of a product that may be imported C. economic principle that each country should produce those goods it can make more efficiently and trade for other goods D. a tax placed on imports to increase their price in the domestic market Section 4 Assessment-2

14 Checking for Understanding
3. Identify embargo, General Agreement on Tariffs and Trade (GATT), World Trade Organization (WTO). An embargo is an agreement prohibiting trade. The General Agreement on Tariffs and Trade (GATT) is a treaty that made an effort to reduce trade barriers. The World Trade Organization (WTO) is a regulatory body that replaced the GATT and enforces the provisions of the treaty. Section 4 Assessment-3

16 Critical Thinking 5. Drawing Conclusions Which type of trade policy do you believe is the most appropriate for the United States to follow? Why? Answers should be supported. Section 4 Assessment-5 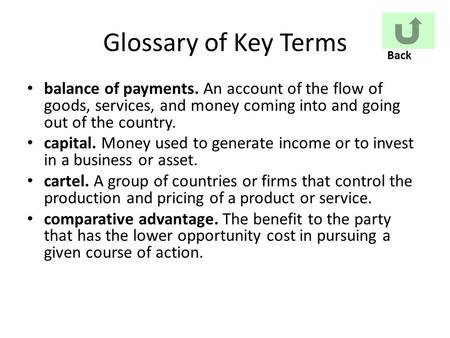