2 Private Roles for Women
As industrialization and urbanization took hold in the US, women in the North felt the impact Many lower-class women took jobs in factories. Middle-class women were freed from chores such as growing their own food and making their own clothes Most people thought middle-class women should spend their energy raising and education their children, entertain guests, serve their husbands, do community service and engage in at-home activities (quilting) Men were expected politics, law and public speaking

3 Private Roles for Women
There were strict legal restrictions for women including being denied the right to vote, in most states married women could not own property, make a will, they could not keep money earned (it was given to a husband or father) Catharine Beecher tried to win respect for women as wives, mothers and teachers Catharine and her sister Mary Beecher created the Hartford Female Seminary While teaching, Catharine began to write books that lobbied for the education of women

4 Public Roles for Women As women became educated, they grew eager to apply their knowledge and skills beyond the home The religious revivals and reform helped heighten women’s sense of potential and power Women played a prominent role in nearly every avenue of reform Due to this, many northern middle-class women became more conscious of their inferior position in society The battle to end slavery was the primary means by which women emerged into the public world of politics

5 Public Roles for Women There were parallels between enslaved African Americans and women – neither could vote, hold office, and both were denied full rights as citizens Many men were very dissatisfied with women’s position in the movement The World Anti-Slavery Convention voted to prohibit women from participating This angered two women- Lucretia Mott and Elizabeth Cody Stanton who later organized a convention on women’s rights

6 Turning Point: Seneca Falls Convention
The Seneca Falls Convention was the first women’s rights convention in the United States At the convention Stanon wrote and presented a historic set of resolutions called the Declaration of Sentiments (much like the Declaration of Independence) The convention passed 12 resolutions by 68 women and 32 men, they protested the lack of legal and political rights for women The ninth resolution was very controversial – it called for women’s suffrage (right to vote) The convention did not trigger an avalanche of women’s rights – most Americans thought women should influence public affairs through their work in the home 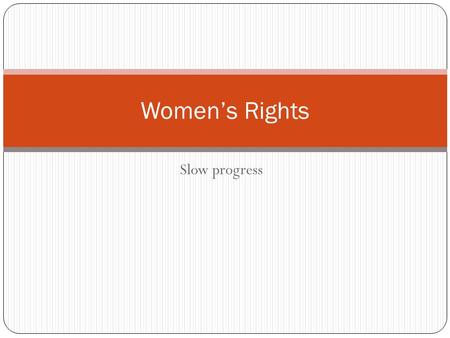