7 Toyota Toyota's performance…has been stunning. The company has not lost money in a single quarter since As U.S. automotive powerhouses are drowning in red ink, Toyota earned its highest ever net profit in 2006—$17 billion. So what keeps Toyota growing and improving year after year? In his book, Magee suggests the driver is a handful of principles embedded deeply in the company, including a respect for people, a willingness to take a long-term view, and the determination to improve the business a little bit every day. © Wiley 2010

22 JIT and TQM- Partners Build quality into all processes
Focus on continuous improvement - Kaizen Quality at the source- sequential inspection Jidoka (authority to stop line) Poka-yoke (fail-safe all processes) Preventive maintenance- scheduled Work environment- everything in its place, a place for everything © Wiley 2010

23 Respect for People: The Role of Employees
Genuine and meaningful respect for associates Willingness to develop cross-functional skills JIT uses bottom-round management – consensus management by committees or teams Actively engage in problem-solving (quality circles) Everyone is empowered Everyone is responsible for quality: understand both internal and external customer needs © Wiley 2010

24 Respect for People: The Role of Employees
Associates gather performance data Team approaches used for problem-solving Decisions made from bottom-up Everyone is responsible for preventive maintenance © Wiley 2010

32 Emerson The company, which makes everything from electric motors and air-conditioner compressors to computerized equipment that can run an oil refinery, reported improved results in fiscal 2004 for the third consecutive year, with sales up 12% to an all-time high of $15.62 billion. Emerson is benefiting hugely from the rebound in the U.S. industrial economy and China's economic boom. But that's only half the story. James Berges, Emerson's president, is a disciple of Toyota Motor (TM ) and its "lean manufacturing" practices. Emerson has closed or sold 140 factories and cut its payroll by 13% since 2000. © Wiley 2010

33 Matsushita No One Does Lean Like The Japanese. Take Matsushita. To counter low-cost rivals, it's taking efficiency to new heights. Two years ago, Matsushita Electric Industrial Co.'s factory in Saga, on Japan's southern island of Kyushu, was looking mighty lean. The plant had doubled efficiency over the previous four years, and machinery stretching the length of the spotless facility could churn out cordless phones, fax machines, and security cameras in record time. © Wiley 2010

34 Parker-Hannifin Donald E. Washkewicz…was promoted to president of Parker Hannifin (PH ), the world's No. 1 maker of motion-control products -- hydraulic and pneumatic components for aircraft, construction equipment, and even theme-park robots. Q: How has lean manufacturing changed work on the factory floor? A: In the past, you had to justify your machine tool by the setup time: It takes me 25 hours to set this thing up, at $50 an hour, so I've got to run a batch of 1 million widgets to justify that setup time. What you ended up doing was using all your capacity to make inventory that nobody needed. In the meantime, your customer service suffered because you didn't want to break in on that machine run to fill new orders. Nobody wins. © Wiley 2010

35 Parker-Hannifin We found that we freed up 25% or 30% of the square footage of our plants just doing just lean and getting rid of all of this waste. Now when the orders come in, you start the process, and you ship it out the door. Nothing sits on shelves anymore. Nothing is queued up. That's what's really driving efficiency and inventory reduction throughout the company. That's basically the concept of lean. © Wiley 2010

36 Parker-Hannifin Q: But don't you lose efficiency by going to this build-to-order approach? A: No. Instead of buying that big $1 million machine tool that'll make 1 million products at lightning speed, you tend to buy lower-cost and smaller capital equipment that you can change over quickly and is more efficient. So, in fact, you don't suffer in the end. You can maintain low setup costs in cellular manufacturing. Workers like this, too. This tends to make their jobs easier. Each worker is the inventory-control manager for raw materials. When he needs materials, he orders them himself. In the prior process, you had to staff a whole purchasing department, and you'd have to send a requisition in to them, and you'd bring in too much invariably because you had to stock up on materials. Now, we have the raw materials delivered only whenever we need them. © Wiley 2010

37 Chapter 7 Highlights JIT is a philosophy that was developed by the Toyota Motor Company in the mid-1970s. It has since become the standard of operation for many industries. It focuses on simplicity, eliminating waste, taking a broad view of operations, visibility, and flexibility. Three key elements of this philosophy are JIT manufacturing, total quality management, and respect for people. JIT views waste as anything that does not add value. © Wiley 2010

39 Chapter 7 Highlights (Continued)
JIT manufacturing is a coordinated production system that enables the right quantities or parts to arrive when they are needed precisely where they are needed. Key elements of JIT manufacturing are the pull system and kanban production, small lot sizes and quick setups, uniform plant loading, flexible resources, and streamlined layout. © Wiley 2010

40 Chapter 7 Highlights (Continued)
TQM creates an organizational culture that defines quality as seen by the customer. The concepts of continuous improvement and quality at the source are integral to allowing for continual growth and the goal of identifying the causes of quality problems. © Wiley 2010

41 Chapter 7 Highlights (Continued)
JIT considers people to be the organization’s most important resource. JIT is equally applicable in service organizations, particularly with the push toward time-based competition and the need to cut costs. JIT success is dependent on interfunctional coordination and effort. © Wiley 2010

42 The End Copyright © 2010 John Wiley & Sons, Inc. All rights reserved. Reproduction or translation of this work beyond that permitted in Section 117 of the 1976 United State Copyright Act without the express written permission of the copyright owner is unlawful. Request for further information should be addressed to the Permissions Department, John Wiley & Sons, Inc. The purchaser may make back-up copies for his/her own use only and not for distribution or resale. The Publisher assumes no responsibility for errors, omissions, or damages, caused by the use of these programs or from the use of the information contained herein. © Wiley 2010 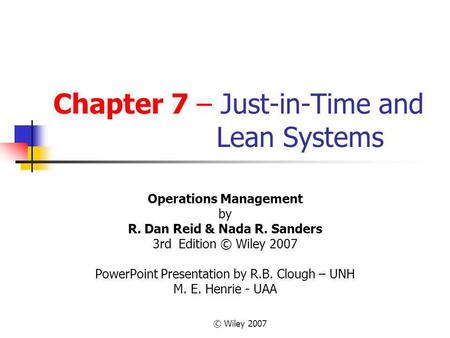 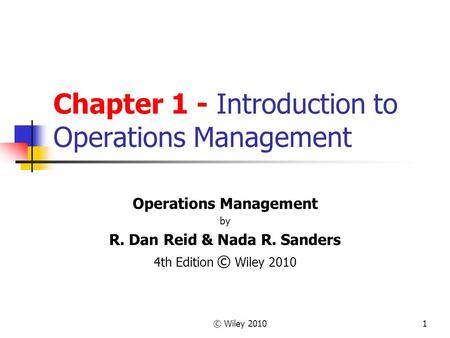 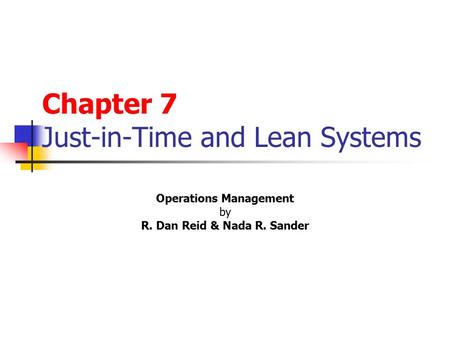 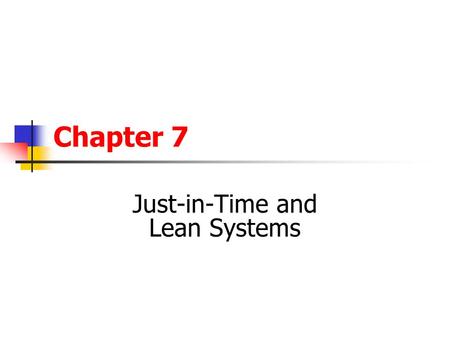 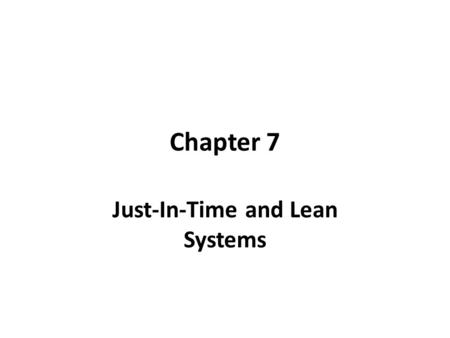 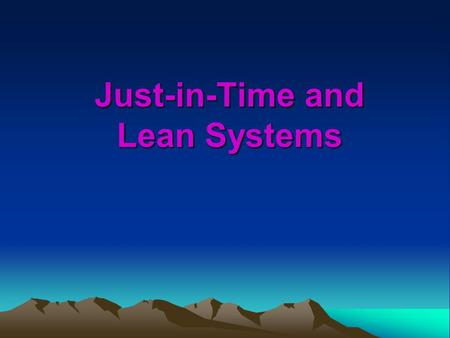 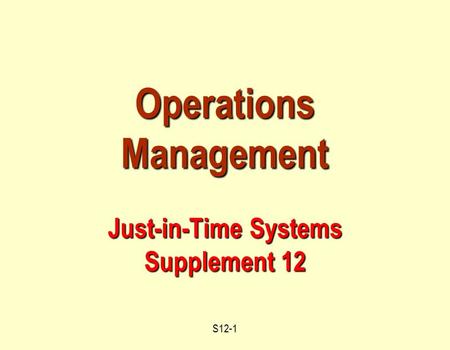 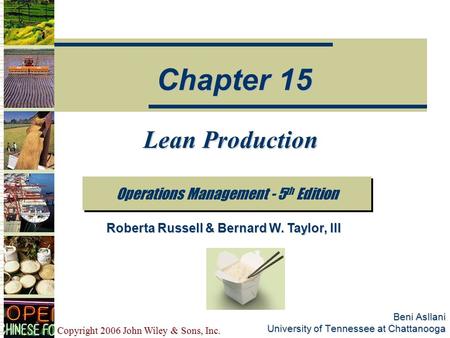 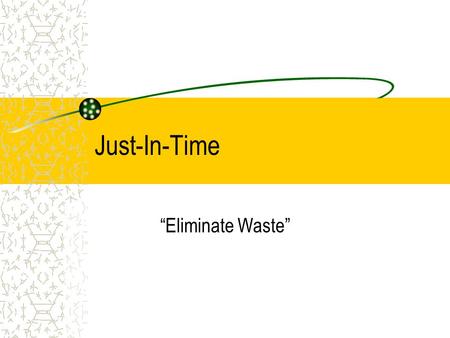 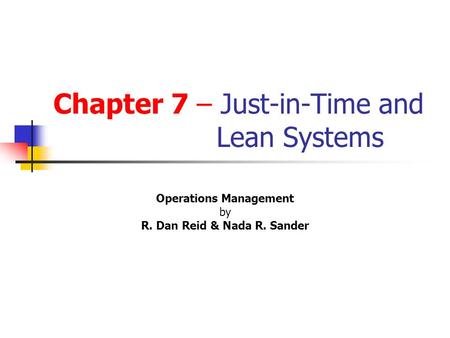 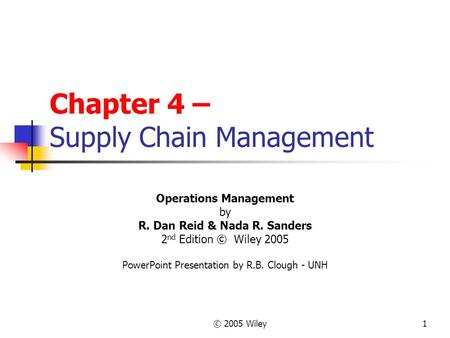 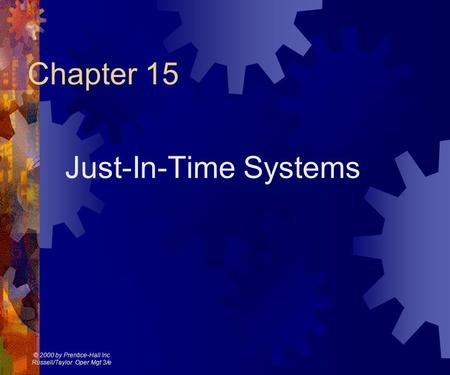 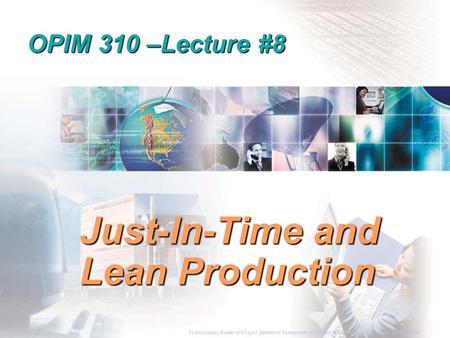 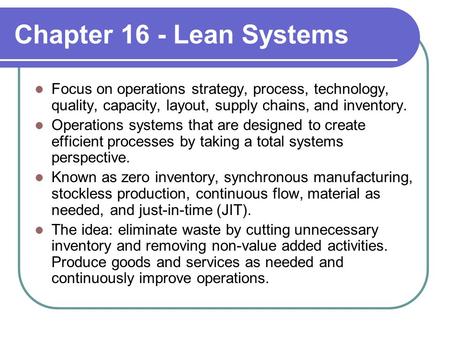 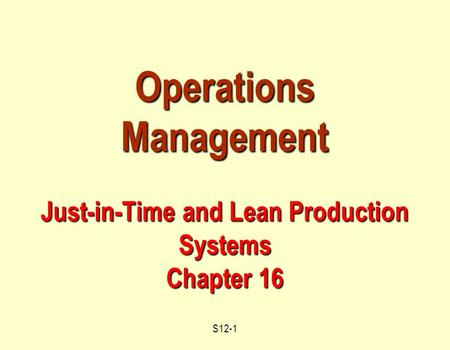 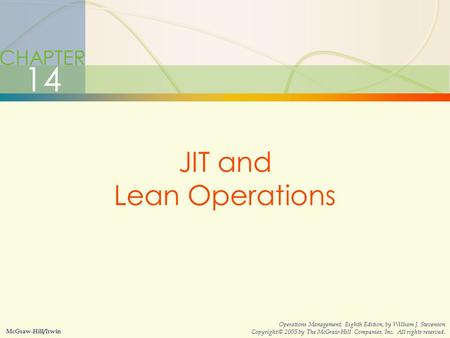 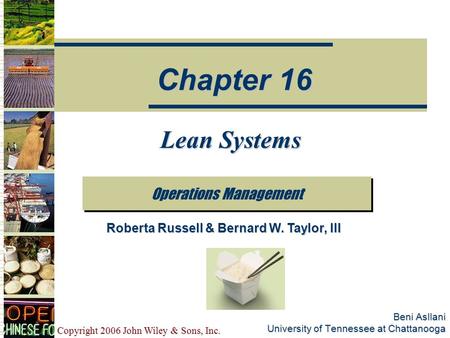 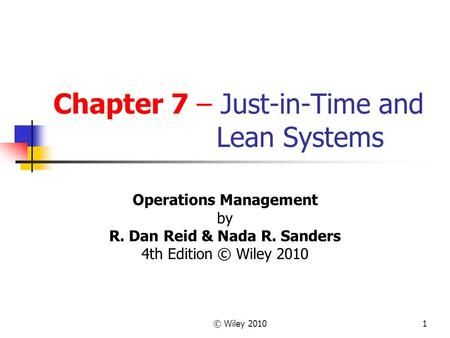 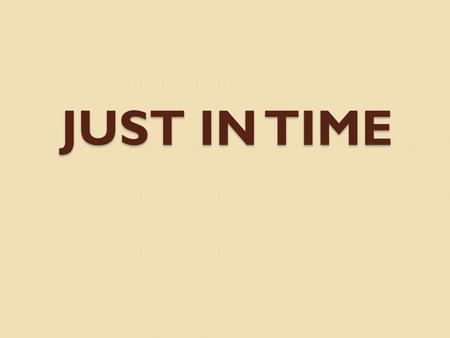 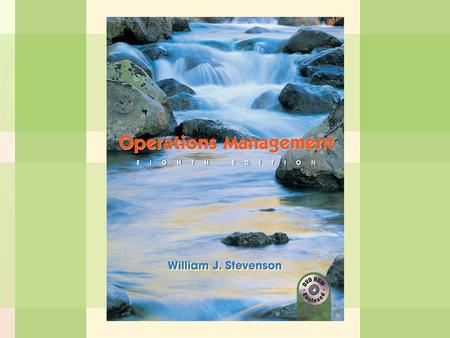