1 Robert’s Rules of Order
Rules governing the running of meetings: Derived from English parliamentary procedure Generally govern the proceedings at formal WECC meetings Provide a common framework, vocabulary, and toolset A tool for the use of the body; they are meant to help you

4 Robert’s Rules of Order
Quorum Generally addressed in the Bylaws or a committee’s charter If not specifically addressed, then a majority of members constitutes a quorum in most situations If a quorum is not present (and is required by relevant governance documents) then any substantive action taken is invalid Myth: Once a quorum is established it carries for the remainder of the meeting One exception at WECC: Member Class meetings (Bylaws § 5.1)

5 Robert’s Rules of Order
Main Motion Introduce an item of business for consideration Cannot be made if another Main Motion is on the floor Debatable and amendable Example “I move that the Standing Committee recommend to the Board of Directors that the policy be adopted.” Or more often at WECC “So moved”

6 Robert’s Rules of Order
Subsidiary Change the main motion, or its handling Example “I move that ‘policy’ be capitalized and read ‘Policy.’” -OR- “I move to postpone the main motion until the next Standing Committee meeting in order to allow time for development of an accompanying White Paper.”

7 Robert’s Rules of Order
Privileged Bring up urgent, special, or important matters that are unrelated to the business on the floor Not debatable, and do not require a second Decided on by the Chair Includes Motions to Adjourn or Recess, and Questions of Privilege Example “I move that the Standing Committee review the notice provided for this meeting for adequacy.” -OR- “I move that the Board enter a Closed Session to address the motion on the floor.”

8 Robert’s Rules of Order
Incidental Related to the business on the floor Allow for a question of procedure Point of Information or Point of Order Examples “Before voting on this motion, please clarify whether the Board directed the Standing Committee to develop a Policy as well as a plan to implement the Policy.” -OR- “Point of Order: the motion for Point of Information is not a debatable motion.”

9 Robert’s Rules of Order: In Practice
Presenting a Motion A motion must have a second. The chair should announce the Motion before debate begins. Always restate the exact wording of a motion. In Practice: Wait to be recognized by the chair Make a concise, affirmative motion Wait for a second

10 Robert’s Rules of Order: In Practice
Debating the Motion Chair facilitates but does not enter into the debate or discussion while acting as chair Speakers must be recognized by the chair In Practice: Chair restates the motion and calls for discussion Mover may speak first Chair facilitates debate Motion to limit or extend debate (two-thirds majority required) Motion to end debate (two-thirds majority required) “Everything that needs to be said has been said…but not by everyone.”

12 Robert’s Rules of Order: In Practice
Voting on the Motion Remember: Bylaws, Charter, Voting Procedures for Standing Committees, WECC Regional Standards Development Procedure Indicate how the vote will be taken Unanimous consent Placard/hand raising Roll call or paper ballot Presiding Officer only votes if his or her vote will change the outcome, or if a ballot vote is taken

13 Robert’s Rules of Order: In Practice
Voting on the Motion – In Practice If debate occurs, a motion to close debate is needed Requires a second and a two-thirds majority vote Usually by consensus If no debate occurs, then the chair asks “Are you ready for the Question” or “Is there any further debate” If no further debate then the chair puts the question “The question is on the adoption of the motion that…” Committee votes pursuant to the relevant process Note: If a participant calls the question this is treated as a Motion to Close Debate Requires a second and a two-thirds majority vote

14 Robert’s Rules of Order: In Practice
Outcomes Other than Voting on the Main or Amended Motion Motion to Table A way to postpone the motion until a later time during the current meeting or a later meeting Motion to Postpone Indefinitely A way to terminate a motion

15 Robert’s Rules of Order: Tips for Assisting Chairs
If you have questions in advance of a meeting contact Legal Counsel to discuss potential scenarios and how to best address those scenarios Coordinate with staff liaison to make reference materials available to participants to avoid surprise as appropriate During meetings type out any new or amended motions for viewing by all participants 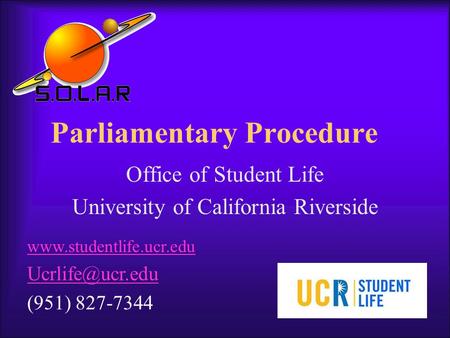 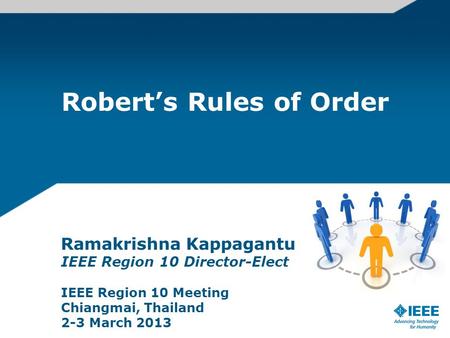 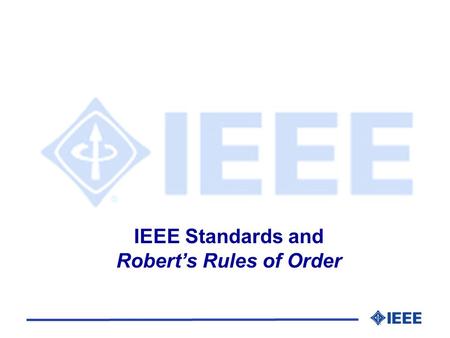 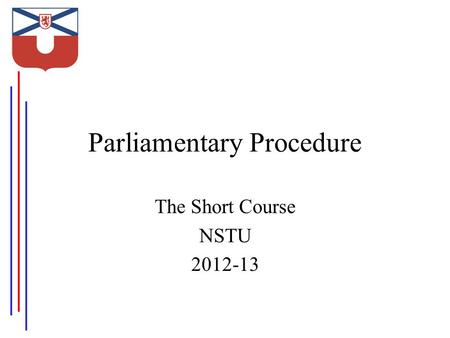 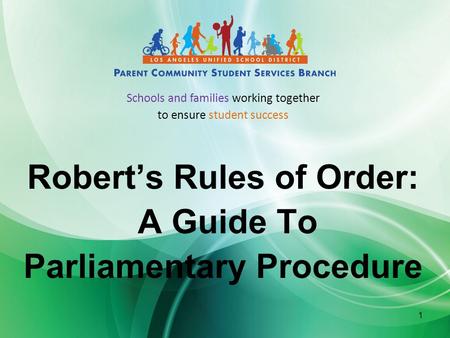 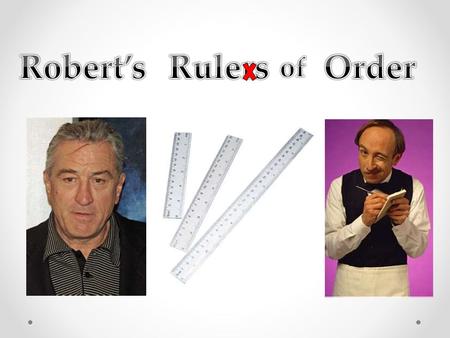 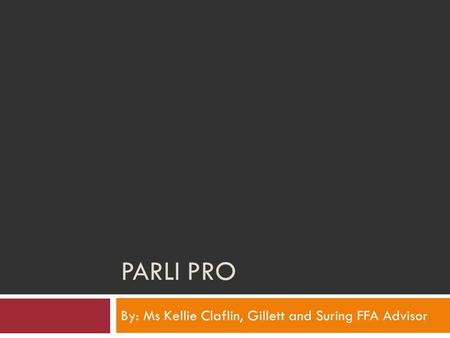 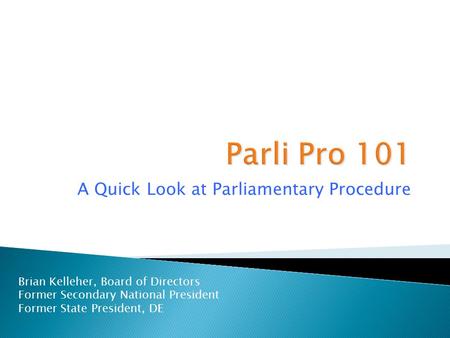 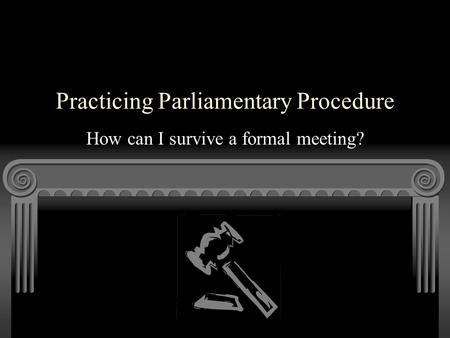 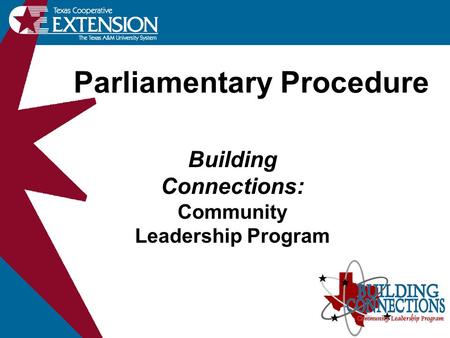 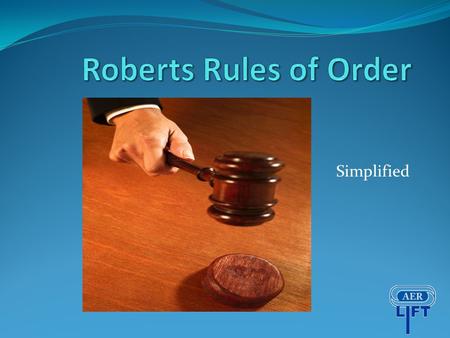 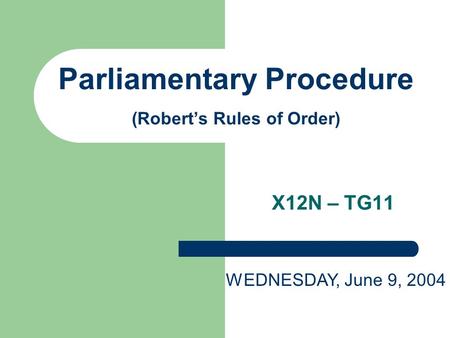 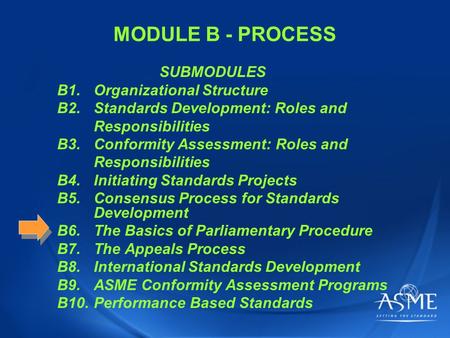 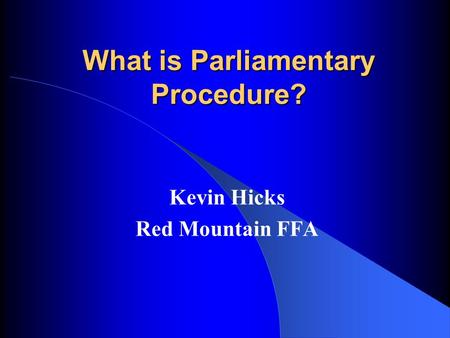 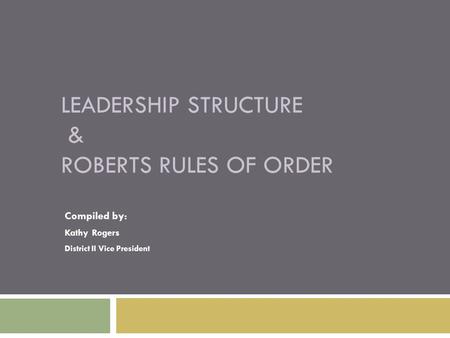