3 3 Definitions Ethics: the discipline dealing with what is good and bad and with moral duty and obligation; the principles of conduct governing an individual or a group. Morals: principles, teachings, or conduct. Guidelines for determining right or wrong actions.

6 6 Engineering Ethics Rules and standards governing the conduct of engineers. Applies to situations involving engineers in their professional lives.

8 8 Attributes of a Professional 1.Membership in profession requires formal education. 2.Work requires sophisticated skills, use of judgment, exercise discretion. 3.Societies or organizations establish standards for admission to profession and standards of conduct. 4.Significant good results from the profession.

9 9 4-Criteria for Safe Designs 1.Design must comply with applicable laws. 2.An acceptable design must meet the standard of acceptable engineering practice. 3.Alternative designs that are potentially safer must be evaluated. 4.The engineer must foresee potential misuses of the product by the client and must design to avoid these problems.

10 10 NSPE Fundamental Canons 1.Hold paramount the safety, health and welfare of the public. 2. Perform services only in areas of their competence. 3.Issue public statements only in an objective and truthful manner. 4. Act for each employer or client as faithful agents or trustees. 5.Avoid deceptive acts. Honest. 6.Conduct themselves honorably, responsibly, ethically, and lawfully so as to enhance the honor, reputation, and usefulness of the profession.

15 15 Conclusions-1 1. It was not ethical for Engineer A to reconcile his original documents without extensive investigation to assure that all original design intent was followed. 2. The Owner is the ultimate client, therefore, it was not ethical for Engineer C to prepare a set of record drawings based on the construction without notifying Engineer A. There is the possibility that Engineer C was aiding and abetting the unlicensed practice of engineering.

16 16 Discussion-1b An engineer’s firm was retained by a fuel company to perform site investigations. The site visits were conducted by engineering technicians under direct supervision of Engineer A. No professional engineer was present during the site visits. All pertinent information was presented to Engineer A who would certify the evaluations. They concluded it was ethical for Engineer A to certify the evaluations were performed in accordance to engineering principles.

20 20 Discussion-2 Conflict between the obligations of an engineer not to disclose information that is considered confidential by the client and the right to be properly compensated. Engineer A should not share the plans with another client. The Code is silent about the failure of a client to provide agreed compensation and how that would effect their status as clients.

23 23 Question-3? 1.Was it ethical for Engineer A to agree to perform an investigation for the newspaper in the manner stated?

24 24 Discussion-3 Engineers should render a professional opinion 1) based upon adequate knowledge of facts 2) the engineer clearly possesses the expertise to render such an opinion It was not unethical for an engineer to criticize a town engineer and consultant with respect to a report on a sanitary landfill for their town.

25 25 Conclusions-3 It was not unethical for Engineer A to agree to perform an investigation for the newspaper. Engineer A did have the obligation to require the newspaper to state in the article that he had been retained for a fee by the newspaper to provide his professional opinion concerning the safety of the bridge.

28 28 Discussion-4 Engineers have a fundamental obligation to hold paramount the safety, health, and welfare of the public in the performance of their professional duties. Board believes that it would not be ethical for Engineer A to withdraw from further work on the project because Engineer A has an obligation to stand by his position to protect the public, health, and safety to refuse the permit. 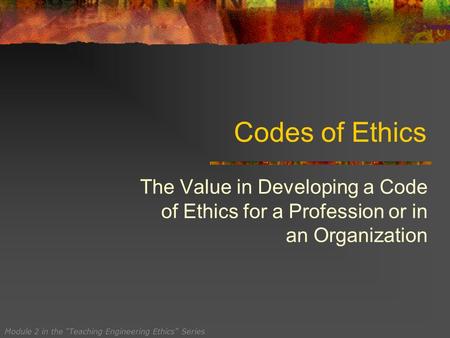 Codes of Ethics The Value in Developing a Code of Ethics for a Profession or in an Organization Module 2 in the “Teaching Engineering Ethics” Series. 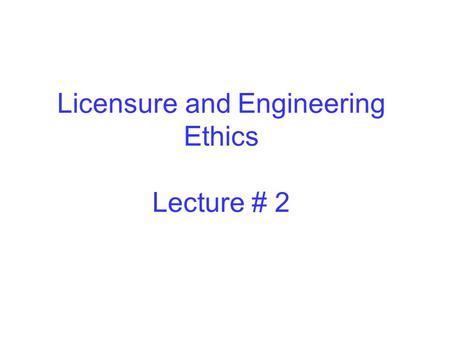 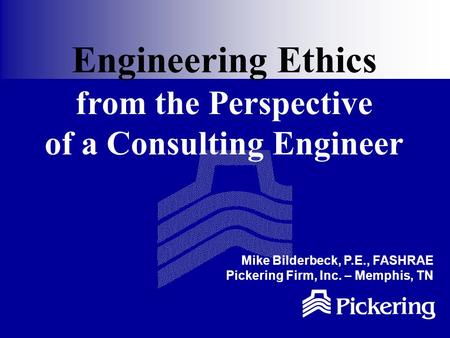 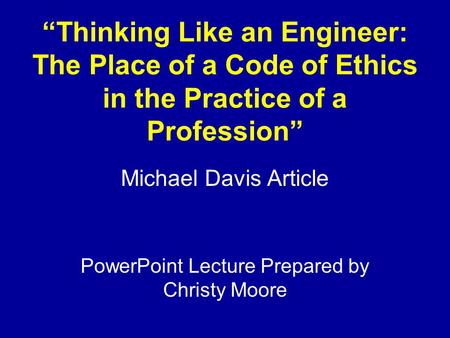 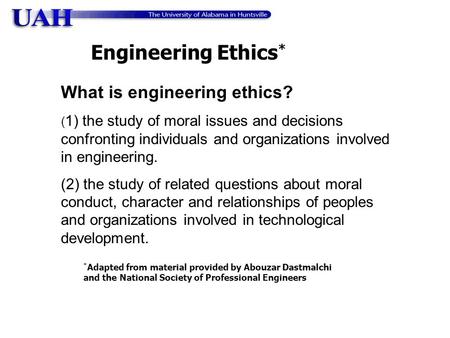 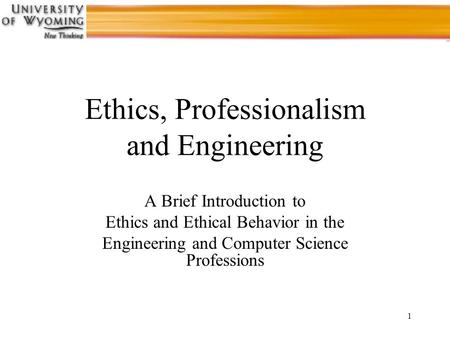 1 Ethics, Professionalism and Engineering A Brief Introduction to Ethics and Ethical Behavior in the Engineering and Computer Science Professions. 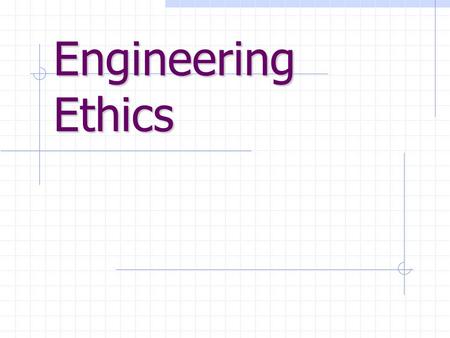 Engineering Ethics. Engineering is a profession Team Exercise #1 In 1 minute, list as many professions as you can. 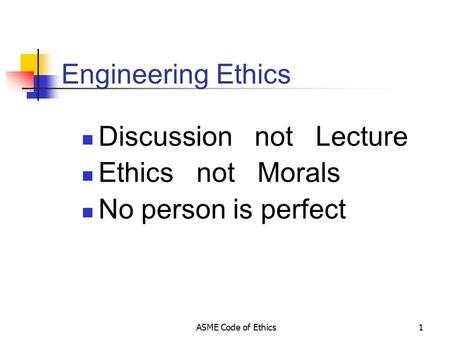 ASME Code of Ethics1 Engineering Ethics Discussion not Lecture Ethics not Morals No person is perfect. 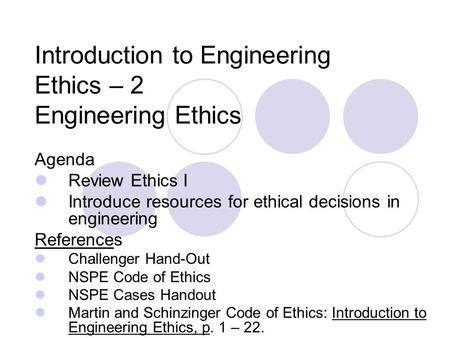 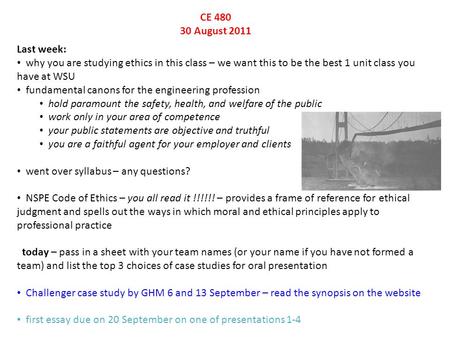 CE August 2011 Last week: why you are studying ethics in this class – we want this to be the best 1 unit class you have at WSU fundamental canons. 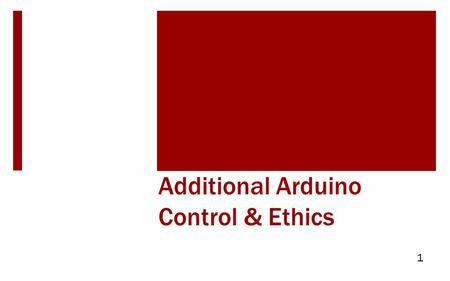 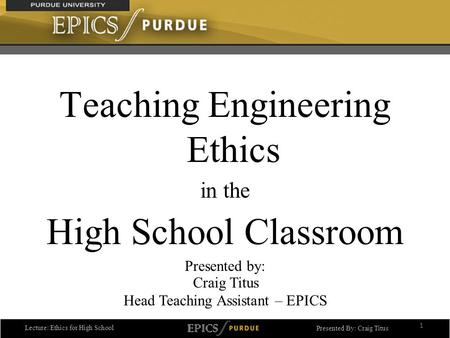 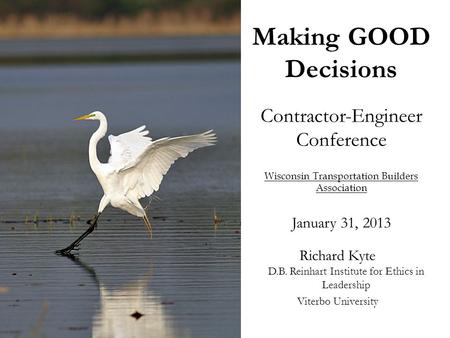 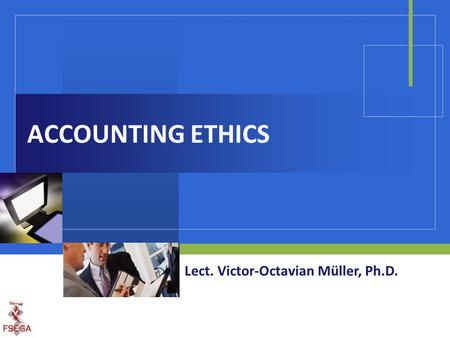 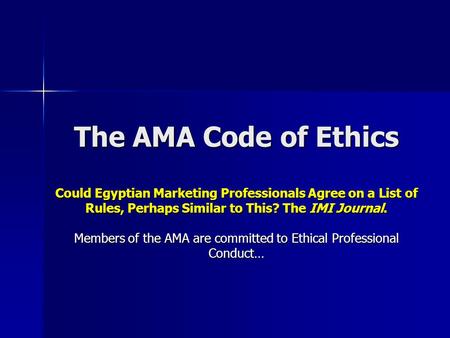 The AMA Code of Ethics Could Egyptian Marketing Professionals Agree on a List of Rules, Perhaps Similar to This? The IMI Journal. Members of the AMA are. 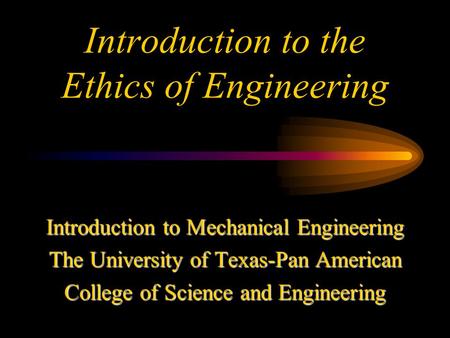 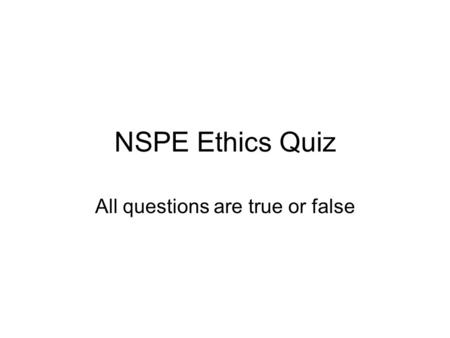 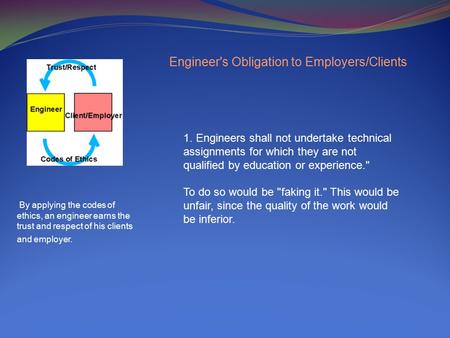 1. Engineers shall not undertake technical assignments for which they are not qualified by education or experience." To do so would be "faking it." This. 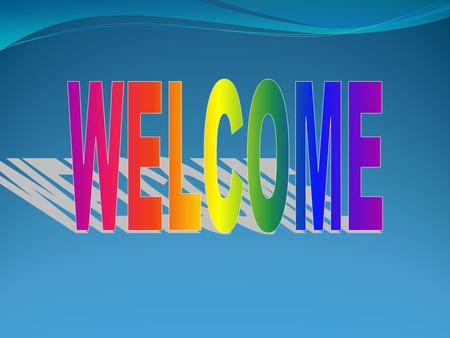 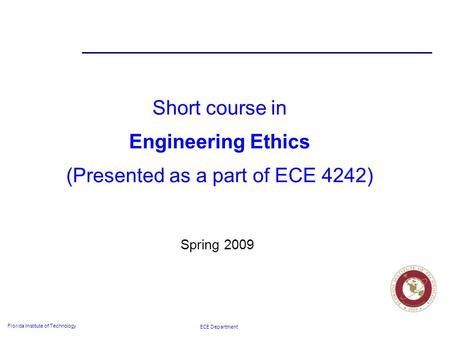