1 1. Quantum theory: introduction and principles
1.1 The failures of classical physics 1.2 Wave-particle duality 1.3 The Schrödinger equation 1.4 The Born interpretation of the wavefunction 1.5 Operators and theorems of the quantum theory 1.6 The Uncertainty Principle  = c 

3 Tentative explanation via the classical mechanics
Equipartition of the energy: Per degree of freedom: average energy = kT (26 meV at 25°C). The total energy is equally “partitioned” over all the available modes of motion. Rayleigh and Jeans used the equipartition principle and consider that the electromagnetic radiation is emitted from a collection of excited oscillators, which can have any given energy by controlling the applied forces (related to T). It led to the Rayleigh-Jeans law for the energy density  as a function of the wavelength . It does not fit to the experiment. From this law, every objects should emit IR, Vis, UV, X-ray radiation. There should be no darkness!! This is called the Ultraviolet catastrophe.

6 1.2 Wave-particle duality
The particle character of electromagnetic radiation:  The photoelectric effect e- (Ek) h metal The photon h ↔ particle-like projectile conservation of energy ½mv2 = h -  = metal workfunction, the minimum energy required to remove an electron from the metal to the infinity. Threshold does not depend on intensity of incident radiation. NB: The photoelectron spectroscopy (UPS, XPS) is based on this photoelectric effect.

7 B. The wave character of the particles:
 Electron diffraction Diffraction is a characteristic property of waves. With X-ray, Bragg showed that a constructive interference occurs when =2d sin. Davidsson and Germer showed also interference phenomenon but with electrons! Particles are characterized by a wavefunction  d V  A link between the particle (p=mv) and the wave () natures  An appropriate potential difference creates electrons that can diffract with the lattice of the nickel

8 1.3 The Schrödinger Equation
From the wave-particle duality, the concepts of classical physics (CP) have to be abandoned to describe microscopic systems. The dynamics of microscopic systems will be described in a new theory: the quantum theory (QT).  A wave, called wavefunction (r,t), is associated to each object. The well-defined trajectory of an object in CP (the location, r, and momenta, p = m.v, are precisely known at each instant t) is replaced by (r,t) indicating that the particle is distributed through space like a wave. In QT, the location, r, and momenta, p, are not precisely known at each instant t (see Uncertainty Principle).  In CP, all modes of motions (rot, trans, vib) can have any given energy by controlling the applied forces. In the QT, all modes of motion cannot have any given energy, but can only be excited at specified energy levels (see quantization of energy). The Planck constant h can be a criterion to know if a problem has to be addressed in CP or in QT. h can be seen has a “quantum of an action” that has the dimension of ML2T-1 (E= h where E is in ML2T-2 and  is in T-1). With the specific parameters of a problem, we built a quantity having the dimension of an action (ML2T-1). If this quantity has the order of magnitude of h (10-34 Js), the problem has to be treated within the QT.

10 (operator)(function)=(constant)×(same function)
 The Schrödinger Equation (SE) shows that the operator H and iħ/t give the same results when they act on the wavefunction. Both are equivalent operators corresponding to the total energy E.  In the case of stationary systems, the potential V(x,y,z) is time independent. The wavefunction can be written as a stationary wave: (x,y,z,t)= (x,y,z) e-it (with E=ħ). This solution of the SE leads to a density of probability |(x,y,z,t)|2= |(x,y,z)|2, which is independent of time. The Time Independent Schrödinger Equation is: NB: In the following, we only envisage the time independent version of the SE. or  The Schrödinger equation is an eigenvalue equation, which has the typical form: (operator)(function)=(constant)×(same function)  The eigenvalue is the energy E. The set of eigenvalues are the only values that the energy can have (quantization).  The eigenfunctions of the Hamiltonian operator H are the wavefunctions  of the system.  To each eigenvalue corresponds a set of eigenfunctions. Among those, only the eigenfunctions that fulfill specific conditions have a physical meaning.

11 1.4 The Born interpretation of the wavefunction
Example of a 1-dimensional system  Physical meaning of the wavefunction: probability of finding the particle in an infinitesimal volume d=dxdydz at some point r is proportional to |(r)|2d |(r)|2 = (r)*(r) is a probability density. It is always positive! wavefunction may have negative or complex values Node

12 A. Normalization Condition
The solution of the differential equation of Schrödinger is defined within a constant N. If  is a known solution of H=E, then =N is a also solution for the same E. H=E  H(N)= E(N)  N(H)=N(E)  H=E The sum of the probability of finding the particle over all infinitesimal volumes d of the space is 1: Normalization condition. We have to determine the constant N, such that the solution =N of the SE is normalized. B. Other mathematical conditions  (r)  ; r  if not: no physical meaning for the normalization condition  (r) should be single-valued r  if not: 2 probability for the same point!!  The SE is a second-order differential equation: (r) and d(r)/dr should be continuous

14 1.5 Operators and principles of quantum mechanics
A. Operators in the quantum theory (QT) An eigenvalue equation, f = f, can be associated to each operator . In the QT, the operators are linear and hermitian.  Linearity:  is linear if: (c f)= c  f (c=constant) and (f+)=  f+   NB: “c” can be defined to fulfill the normalization condition  Hermiticity: A linear operator is hermitian if: where f and  are finite, uniform, continuous and the integral for the normalization converge.  The eigenvalues of an hermitian operator are real numbers (= *)  When the operator of an eigenvalue equation is hermitian, 2 eigenfunctions (fj, fk) corresponding to 2 different eigenvalues (j,  k) are orthogonal.

15 B. Principles of Quantum mechanics
 1. To each observable or measurable property <> of the system corresponds a linear and hermitian operator , such that the only measurable values of this observable are the eigenvalues j of the corresponding operator. f = f  2. Each hermitian operator  representing a physical property is “complete”. Def: An operator  is “complete” if any function (finite, uniform and continuous) (x,y,z) can be developed as a series of eigenfunctions fj of this operator.  3. If (x,y,z) is a solution of the Schrödinger equation for a particle, and if we want to measure the value of the observable related to the complete and hermitian operator  (that is not the Hamiltonian), then the probability to measure the eigenvalue k is equal to the square of the modulus of fk’s coefficient, that is |Ck|2, for an othornomal set of eigenfunctions {fj}. Def: The eigenfunctions are orthonormal if NB: In this case:

17 1.6 The Uncertainty Principle
1. When two operators are commutable (and with the Hamiltonian operator), their eigenfunctions are common and the corresponding observables can be determined simultaneously and accurately. 2. Reciprocally, if two operators do not commute, the corresponding observable cannot be determined simultaneously and accurately. If (12- 21) = c, where “c” is a constant, then an uncertainty relation takes place for the measurement of these two observables: where Uncertainty Principle

18 Example of the Uncertainty Principle
1. For a free atom and without taking into account the spin-orbit coupling, the angular orbital moment L2 and the total spin S2 commute with the Hamiltonian H. Hence, an exact value of the eigenvalues L of L2 and S of S2 can be measured simultaneously. L and S are good quantum numbers to characterize the wavefunction of a free atom  see Chap 13 “Atomic structure and atomic spectra”. 2. The position x and the momentum px (along the x axis). According to the correspondence principles, the quantum operators are: x and ħ/i( / x). The commutator can be calculated to be: The consequence is a breakdown of the classical mechanics laws: if there is a complete certainty about the position of the particle (x=0), then there is a complete uncertainty about the momentum (px=). 3. The time and the energy: If a system stays in a state during a time t, the energy of this system cannot be determined more accurately than with an error E. This incertitude is of major importance for all spectroscopies:  see Chap 16, 17, 18 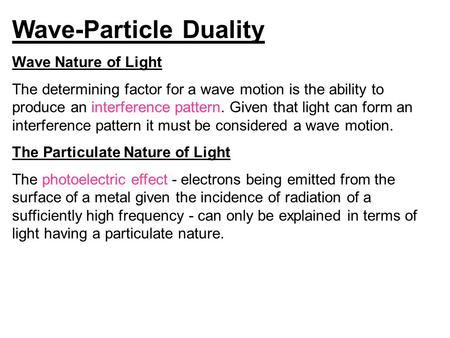 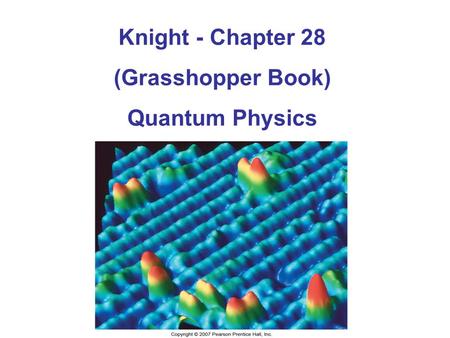 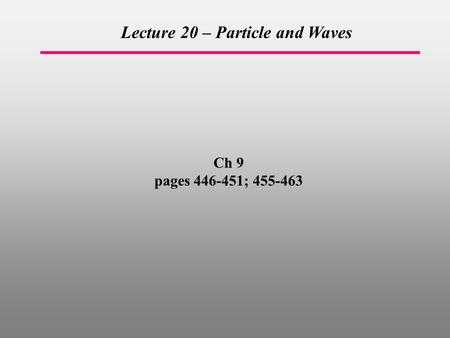 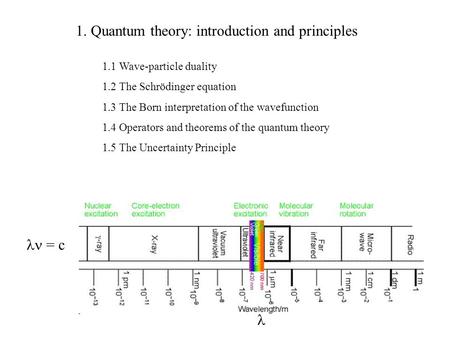 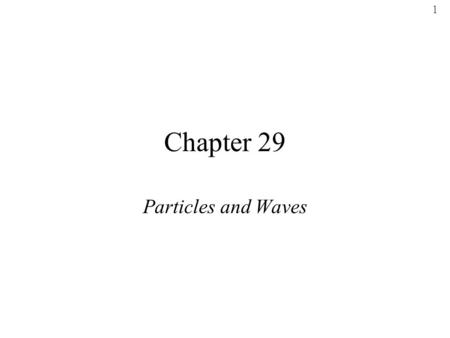 1 Chapter 29 Particles and Waves. 2 There is nothing new to be discovered in physics now. All that remains is more and more precise measurement. -- William. 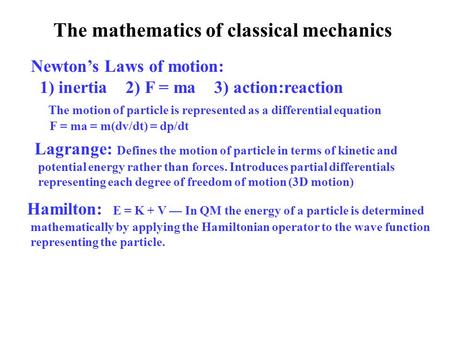 The mathematics of classical mechanics Newton’s Laws of motion: 1) inertia 2) F = ma 3) action:reaction The motion of particle is represented as a differential. 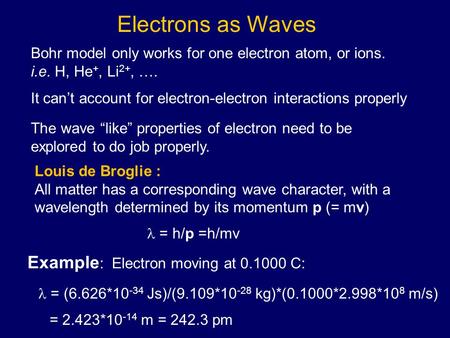 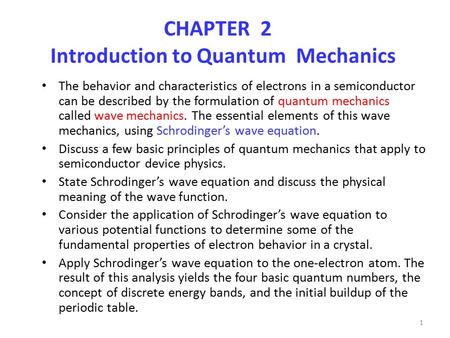 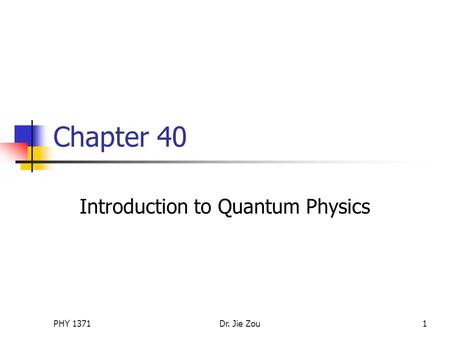 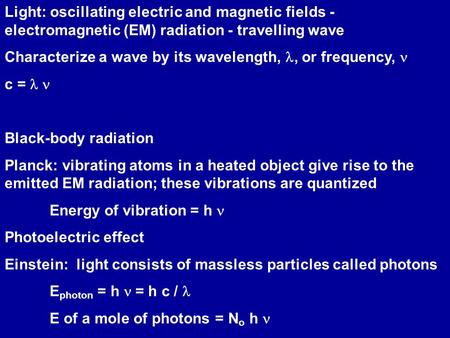 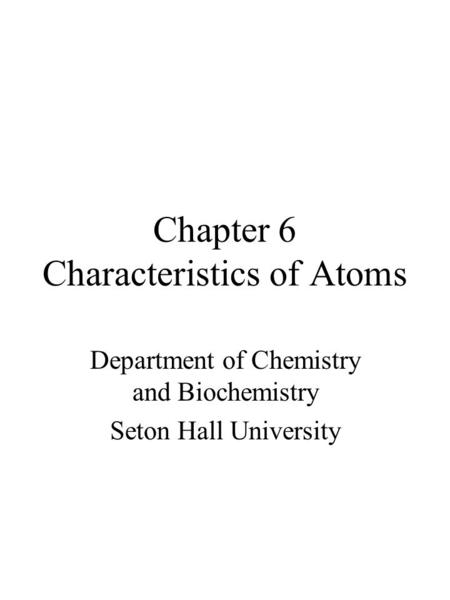 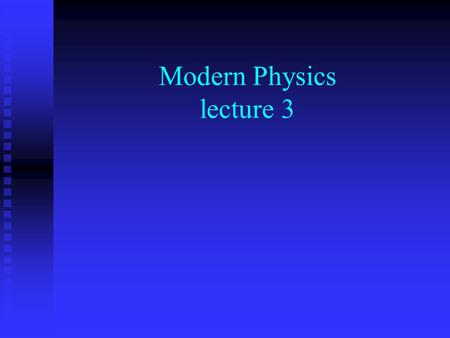 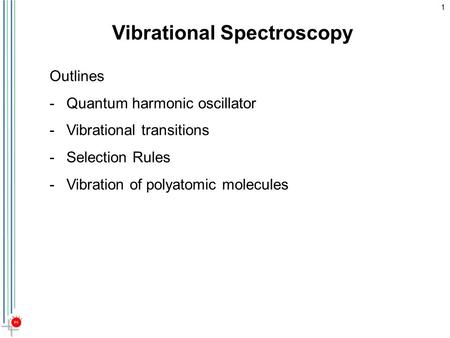 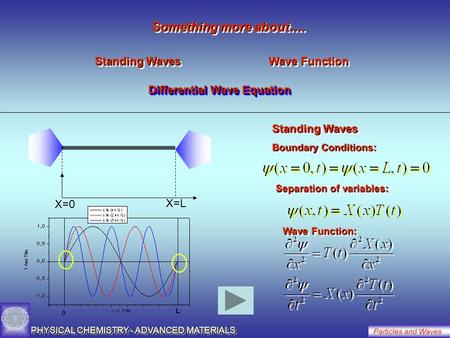 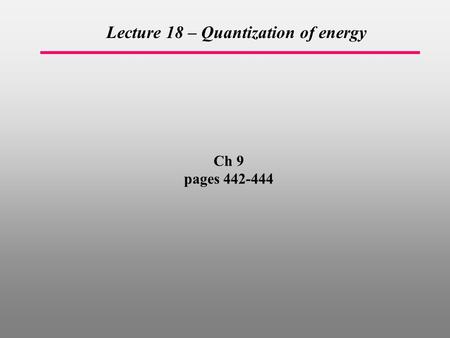