4 Non Specific Defense Mechanisms This type is divided into two lines: First line Natural Barriers : which includes 1.Skin: intact skin prevents microorganism to get in. 2.Mucous membranes that cover respiratory tract, digestive tract, urogenital system, conjunctiva. 3.Secretions and body fluids like mucus secretions that cover mucous membrane of respiratory and other tracts which trap bacteria and other other foreign substances, saliva which contains antibodies, lysozymes and antibacterial substances, tears contains lysozymes, gastric juice contains hydrochloric acid (low pH) and digestive enzymes that kill microorganisms swallowed into the stomach, and low pH in the urine, and low pH in the vagina, Sebaceous glands 4.Hair in the nastrils, eyelashes, wax in the ears trap the particular matters

5 Second line: 1. Antimicrobial substances : e.g. Interferons and compelement system -Interferons are proteins produced by lymphocytes macrophages and fibroblast mainly in response to viral infection. Functions of interferons: a). They act as antiviral b). They activate immune cells such as natural killer cells and macrophages. c). Increase recognition of infection and tumor cells to T lymphocytes. d). Increase the ability of uninfected cells to resist new infection by virus. - Complement system is a group of about 20 proteins in the blood plasma and on the cell membrane. Normally these proteins are inactive but when activated they enhance certain immune, allergic and inflammatory reactions. 5

6 2. Phagocytosis : means ingestion of the foreign substances by cells called phagocytes. Phagocytes include neutrophils and macrophages. Three phases of phagocytosis include chemotaxis, adherence, and ingestion. i).Chemotaxis: means movement of phagocytic cells toward certain substances (such as microbial products and activated complement proteins). ii).Adherance: the cell membrane of phagocyte attaches to the surface of foreign body. iii).Ingestion: the cell membrane of phagocyte extends projections (psuedopodias) that engulf the organism; pseudopods fuse together and surrounded the organism in a phagocytic vesicle. After ingestion the phagocytes release chemicals that kill the organism. 6

8 3. Inflammation: it is very important biological process by which the microorganisms and other foreign bodies are destroyed. In inflammation the WBC migrate from circulation to the inflamed area and engulfed the microorganism or foreign body. Inflammation usually causes redness, pain, heat, swelling and loss of function. Inflammation helps remove organisms, toxins, and foreign substances from affected site, inhibiting their spread and preparing the site for tissue repair. 8

9 4. Fever It means increase in body temperature. Fever occurs when microorganisms invade body that leads to release certain substances which is called Interleukin 1 (IL1). Interleukin1(IL1) act on the hypothalamus which leads to increase body temperature. Fever prevent the growth of some microorganisms and also it may enhance activity of immune system. 9

10 10 Immunological Surveillance: Natural killer cells are kind of lymphocytes which have ability to detect and kill any transformed cells (abnormal cells) in the body. So NK acts to remove abnormal cells and prevent tumor formation. 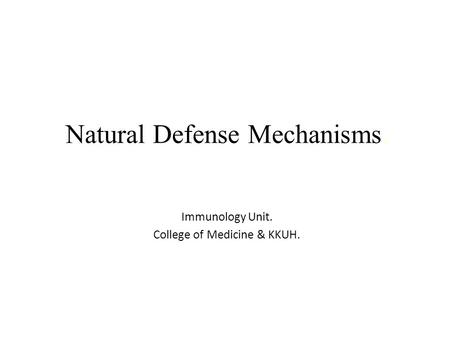 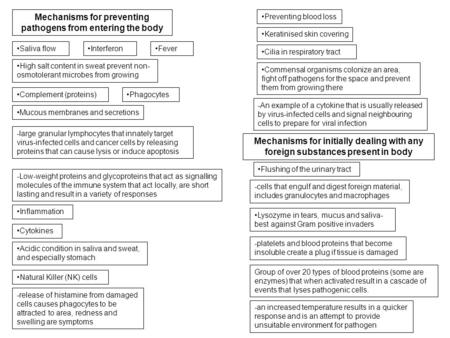 Mechanisms for preventing pathogens from entering the body Mechanisms for initially dealing with any foreign substances present in body Mucous membranes. 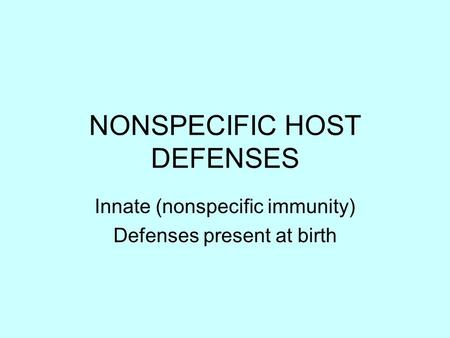 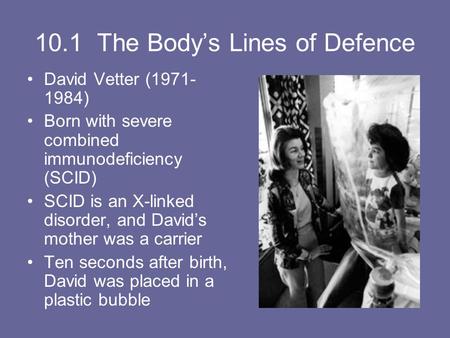 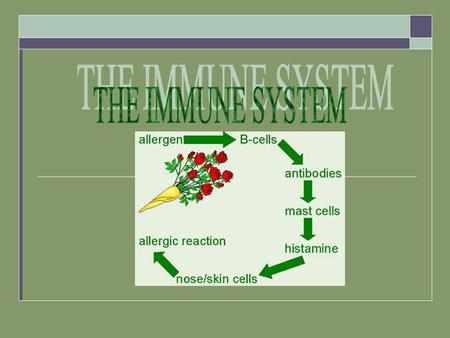 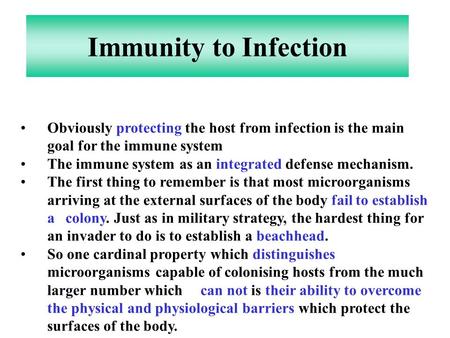 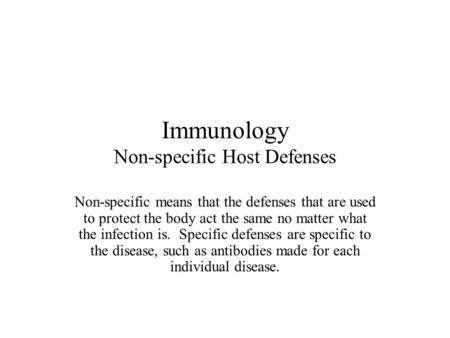 Immunology Non-specific Host Defenses Non-specific means that the defenses that are used to protect the body act the same no matter what the infection. 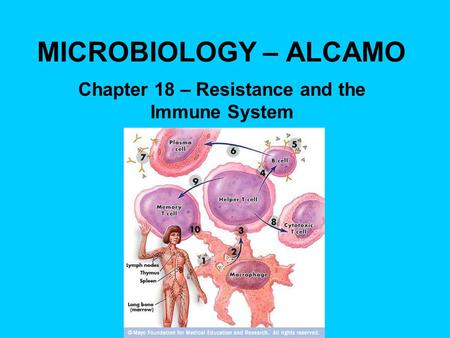