3 The Larynx The Larynx (voice box) is positioned in the throat where the pharynx divides into the respiratory tract (trachea) and the digestive tract (oesophagus). o5.com

4 The Larynx The Larynx has two main functions in communication.
To provide an open airway (when breathing) To provide a mechanism for sound production (when speaking) A third function is to ensure a closed air channel during swallowing, preventing food or drink from entering the trachea.

5 The Larynx The Larynx is a hollow box which houses the vocal folds/vocal cords. In humans, its structure basically consists of a framework of nine cartilages (gristle), joined by membranes and ligaments. These form a box in which sound can be produced and resonate.

6 The Larynx The upper opening of this ‘box’ is called the glottis, and is often covered by the epiglottis, the uppermost cartilage of the larynx. The epiglottis extends from the posterior of the tongue to its anchor point on the anterior rim of the thyroid cartilage.

7 The Larynx Being flexible and spoon shaped, the epiglottis tips forward over the rising larynx during swallowing and prevents food from entering the larynx and trachea. When air is flowing into the larynx, the passage is wide open and the epiglottis is held away from the larynx.

8 The Larynx The large cartilage ring, the thyroid cartilage, at the top of the larynx is composed of two bands which at the join, often develop a prominence commonly known as the ‘Adams Apple’.

9 The Larynx Below this is the cricoid cartilage, which is attached to the trachea at the lower edge. Three pairs of smaller cartilages from part of the lateral and posterior walls of the larynx. The most important of these are the laterally placed arytenoid cartilages because these anchor the vocal cords. Muscles connect the cartilages to the head or neck while others alter the position, shape and tension of the vocal folds/vocal cords.

10 The Larynx The interior of the larynx has a mucus-coated lining. Cillia, or hairs, on the mucous lining below the vocal cords push substances towards the pharynx. The action of ‘clearing out throat’ helps to move mucus up and out of the larynx.

11 The Larynx Lying under the mucous lining, on each side, are the vocal ligaments. These join some of the cartilages to each other and in so doing draw the mucous lining up to form the vocal folds or true vocal cords. When viewed from above the right and left folds form a ‘V’ shape.

13 The Larynx The false vocal cords play no part in sound production but the mucus produced assists in lubricating the true vocal cords. These false vocal cords also snap shut if they come into contact with liquids, preventing them from entering the breathing passages during drinking. fauquierent.blogspot.com

14 Phonation Phonation is the name given to the complicated process of producing intelligible sounds or speech. This process can be divided roughly into three stages. Production of airflow Production of sound Articulation of the voice

15 Phonation 1. Production of airflow
Air is expelled from the lungs automatically as we breathe and as we speak. The force of air must be great enough to push open the vocal cords. This is achieved by the relaxing of the diaphragm muscle so that the pressure inside the chest cavity is higher than that outside the body.

16 Phonation Air is thus forced out in an attempt to equalise the pressure inside and outside the body. The airflow can be altered in various ways, such as by exercising, holding your breath, talking and shouting. A cough can expel a hurricane-force airflow.

17 Phonation 2. Production of Sound The rapid opening and closing of the glottis set up the vibration pattern, which produces sound. The results from the release of air from the lungs and the vibration of the vocal cords.

18 Phonation The length of the vocal folds/cords, and therefore the size of the glottis, is controlled by the vagus nerve (the tenth cranial nerve). One of this nerve’s functions is the contraction and relaxation of the muscles and consequently the movement of the attached ligaments and cartilage. 12cranialnerves.wordpress.com

19 Phonation The shorter the tenser the vocal folds, the faster they vibrate and the higher the pitch. The glottis is wide open when we produce deep notes and just a narrow slit for high pitched sounds. en.wikipedia.org

20 Phonation A teenage boy’s larynx enlarges comparably more during puberty, than does a girls. Thus, his vocal folds/cords become longer and thicker. They vibrate more slowly, resulting in a lower pitch (deeper voice).

21 Phonation The volume or loudness of the voice is controlled by the strength of the airflow. The greater the airflow, the stronger the vibration, the louder the sound.

22 Phonation 3. Articulation of the voice This is the modification of sound we call speech. Sound is an important medium of communication for humans, particularly if it is intelligible. The vibration of the vocal folds/cords only produces a buzzing sound.

23 Phonation The resonance (quality) of a voice is determined by other structures situated above the larynx, such as the pharynx and the various sinuses of the cranium. Sinuses are air-filled cavities which are lined with a mucous membrane. There is a significant change in the voice when a person is blocked up or has a sore throat.

24 Phonation Finally, in speech, the sounds must be shaped into vowels (a, e, I, o, u) and consonants (other letters of the alphabet) by the muscles of the tongue, soft palate, cheeks and lips. These are the associated structures that assist in the production of sound. 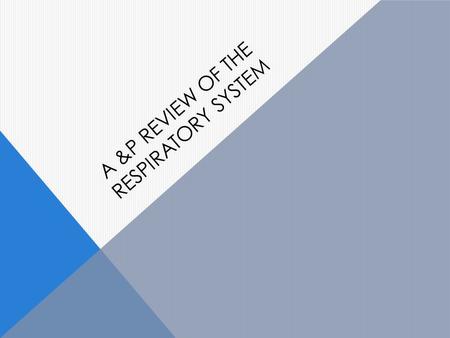 A &P REVIEW OF THE RESPIRATORY SYSTEM. Describe the principal functions of the respiratory system. 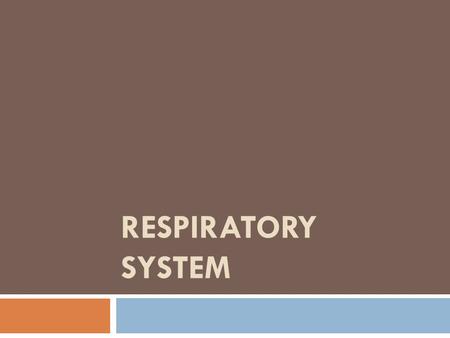 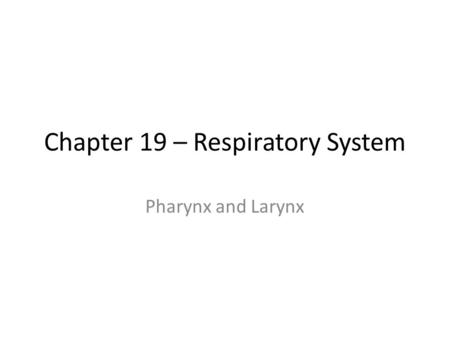 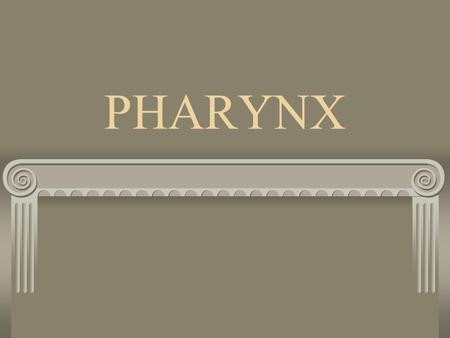 PHARYNX. Plays a part in both digestive system and respiratory system. 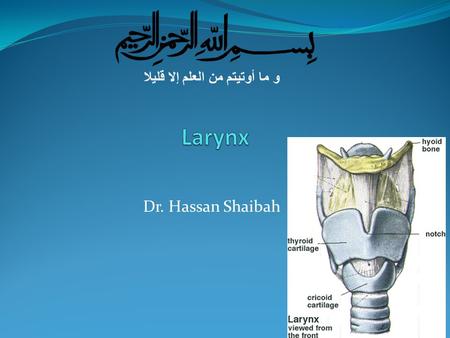 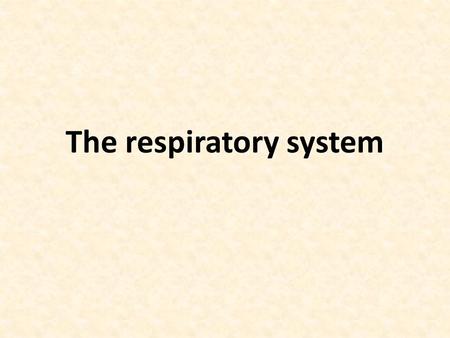 The respiratory system. Respiration: The exchange of gases between an organism and its environment The process has two phase: - Organismic respiration. 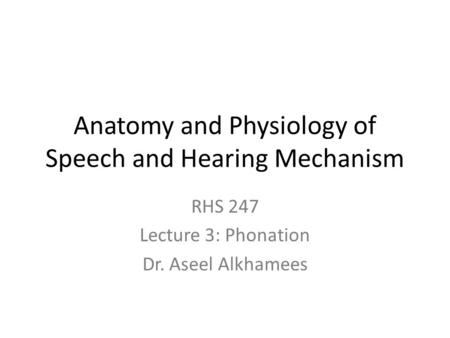 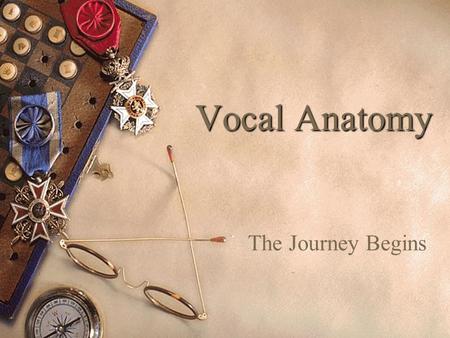 Vocal Anatomy The Journey Begins Singing involves the control and manipulation of numerous muscles. These muscles are accustomed to doing their own thing. 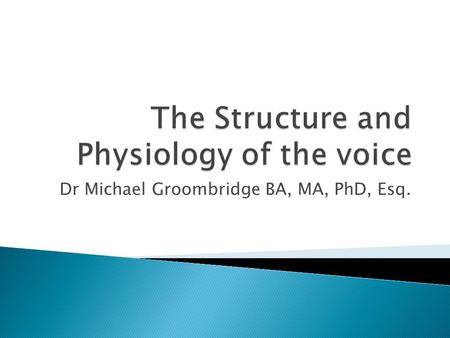