1 The study of sounds

2 The sounds of spoken English do not match up, a lot of the time, with letters of written English. If we cannot use the letters of the alphabet in a consistent way to represent the sounds we make, how do we go about describing the sounds of a language like English? One solution is to produce a separate alphabet with symbols that represent sounds. Such a set of symbols is called the phonetic alphabet.

3 In this chapter, we will look at how
these symbols are used to represent both the consonant and vowel sounds of English words and what physical aspects of the human vocal tract are involved in the production of those sounds.

7 Place of articulation: The location inside the mouth at which the constriction of the oral cavity takes place while the air is passing through the mouth . Most consonant sounds are produced by using the tongue and other parts of the mouth. t is,.

8 To describe the place of articulation of most consonant sounds, we can start at the front of the mouth and work back. We can also keep the voiced–voiceless distinction in mind and begin using the symbols of the phonetic alphabet for specific sounds

10 Labiodentals These are sounds formed with the upper teeth and the lower lip. The sounds at the beginning of fat and vat and the final sounds in the words safe and save are labiodentals. They are represented by the symbols [f], which is voiceless, and [v], which is voiced. Notice that the final sound in the word cough, and the initial sound in photo are both pronounced as [f].

12 The term “interdentals” is sometimes used for these consonants when they are pronounced with the tongue tip between (= inter) the upper and lower teeth.

13 Alveolars These are sounds formed with the front part of the tongue on the alveolar ridge, which is the rough, bony ridge immediately behind and above the upper teeth. The initial sounds in top, dip, sit, zoo and nut are all alveolars. The symbols for these sounds are [t], [d], [s], [z], [n]. Of these, [t] and [s] are voiceless whereas [d],[z] and [n] are voiced. Other alveolars are the [l] sound found at the beginning of words such as lap and lit, and the [r] sound at the beginning of right and write.

16 Velars Sounds produced with the back of the tongue against the velum(soft palate) are called velars. There is a voiceless velar sound, represented by the symbol [k], which occurs not only in kid and kill, but is also the initial sound in car and cold. The voiced velar sound heard at the beginning of words like go, gun and give is represented by [ɡ]. This is also the final sound in words like bag, mug and, despite the spelling, plague.

17 The velum can be lowered to allow air to flow through the nasal cavity and thereby produce another voiced velar, represented by the symbol [ŋ]. In written English, this sound is normally spelled as the two letters “ng.” So, the [ŋ] sound is at the end of sing, sang and, despite the spelling, tongue. It occurs twice in the form ringing.

18 Glottals There is one sound that is produced without the active use of the tongue and other parts of the mouth. It is the sound [h] which occurs at the beginning of have and house and, for most speakers, as the first sound in who and whose. This sound is usually described as a voiceless glottal.

22 Stops Of the sounds we have already mentioned, the set [p], [b], [t], [d], [k], [ɡ] are all produced by some form of “stopping” of the air stream (very briefly) then letting it go abruptly. This type of consonant sound, resulting from a blocking or stopping effect on the air stream, is called a stop (or a “plosive”).

23 A full description of the [t] sound at the
beginning of a word like ten is as a voiceless alveolar stop. In some discussions, only the manner of articulation is mentioned, as when it is said that the word bed, for example, begins and ends with voiced stops.

24 Fricatives The manner of articulation used in producing the set of sounds [f], [v], [θ], [ð], [s], [z], [ʃ], [ʒ] involves almost blocking the air stream and having the air push through the very narrow opening. As the air is pushed through, a type of friction is produced and the resulting sounds are called fricatives.

25 If you put your open hand in front of your mouth when making these sounds, [f] and [s] in particular, you should be able to feel the stream of air being pushed out.

27 Affricates If you combine a brief stopping of the air stream with an obstructed release which causes some friction, you will be able to produce the sounds [ʧ] and [ʤ]. These are called affricates and occur at the beginning of the words cheap and jeep. In the first of these, there is a voiceless affricate [ʧ], and in the second, a voiced affricate [ʤ].

28 Nasals Most sounds are produced orally, with the velum raised, preventing airflow from entering the nasal cavity. However, when the velum is lowered and the air stream is allowed to flow out through the nose to produce [m], [n] and [ŋ], the sounds are described as nasals. These three sounds are all voiced. The words morning, knitting and name begin and end with nasals.

31 Glottal stops There are two common terms used to describe ways of pronouncing consonants: The glottal stop, represented by the symbol [ʔ], occurs when the space between the vocal cords (the glottis) is closed completely , then released. Try saying the expression Oh oh!. Between the first Oh and the second oh we typically produce a glottal stop. Others put one in place of “t” when they pronounce Batman quickly. You can also produce a glottal stop if you try to say the words butter or bottle without pronouncing the “-tt-” part in the middle. This sound is considered to be characteristic of Cockney (London) speech. Try saying the name Harry Potter as if it didn’t have the “H” or the “tt.”).

32 flaps If, however, you are someone who pronounces the word butter in a way that is close to “budder,” then you are making a flap. It is represented by [D] or sometimes [ɾ]. This sound is produced by the tongue tip tapping the alveolar ridge briefly. Many American English speakers have a tendency to “flap” the [t] and [d] consonants between vowels so that, in casual speech, the pairs latter and ladder do not have distinct middle consonants. Nor do writer and rider, metal and medal. They all have flaps. The student who was told about the importance of Plato in class and wrote it in his notes as playdough was clearly a victim of a misinterpreted flap

33 This rather lengthy list of the phonetic features of English consonant sounds is not presented as a challenge to your ability to memorize a lot of terminology and symbols. It is presented as an illustration of how a thorough description of the physical aspects of speech production will allow us to characterize the sounds of spoken English, independently of the vagaries of spelling found in written English.

35 Vowels While the consonant sounds are mostly articulated via closure or obstruction in the vocal tract, vowel sounds are produced with a relatively free flow of air. They are all typically voiced. To describe vowel sounds, we consider the way in which the tongue influences the shape through which the airflow must pass.

36 To talk about a place of articulation, we think of the space inside the mouth as having a front versus a back and a high versus a low area. Thus, in the pronunciation of heat and hit, we talk about “high, front” vowels because the sound is made with the front part of the tongue in a raised position.

37 In contrast, the vowel sound in hat is produced with the tongue in a lower position and the sound in hot can be described as a “low, back” vowel. The next time you’re facing the bathroom mirror, try saying the words heat, hit, hat, hot. For the first two, your mouth will stay fairly closed, but for the last two, your tongue will move lower and cause your mouth to open wider. (The sounds of relaxation and pleasure typically contain lower vowels.)

38 Diphthongs Diphthongs: a combination of two vowel sounds. When we produce, diphthongs our vocal organs move from one vocalic position [a] to another [ɪ] as we produce the sound [aɪ], as in Hi or Bye. The movement in this diphthong is from low towards high front

39 Alternatively, we can use movement from low towards high back, combining [a] and [ʊ] to produce the sound [aʊ], which is the diphthong repeated in the traditional speech In some descriptions, the movement is interpreted as involving a glide such as [j] or [w], so that the diphthongs we are representing as [aɪ] and [aʊ] may sometimes be seen as [aj] or [aw].training exercise [haʊ naʊ braʊn kaʊ].

40 Subtle individual variation
Vowel sounds are notorious for varying between one variety of English and the next, often being a key element in what we recognize as different accents. Some of the sound distinctions shown here may not even be used regularly in your own speech. It may be, for example, that you make no distinction between the vowels in the words caught and cot and use [ɑ] in both. You may also be used to seeing the vowel sound of pet represented as [e] in dictionaries rather than with [ɛ] as used here.

41 You may not make a significant distinction between the central vowels [ə], called “schwa,” and [ʌ], called “wedge.” If you’re trying to transcribe, just use schwa [ə]. In fact, in casual speech, we all use schwa more than any other single sound. It is the unstressed vowel (underlined) in the everyday use of words such as afford, collapse, photograph, wanted, and in those very common words a and the.

43 Such subtle differences enable us to identify individual voices and recognize people we know as soon as they speak. But those differences don’t help us understand how we are able to work out what total strangers with unfamiliar voices are saying.

44 We are clearly able to disregard all the subtle individual variation in the phonetic detail of voices and recognize each underlying sound type as part of a word with a particular meaning. To make sense of how we do that, we need to look at the more general sound patterns, or the phonology, of a language. 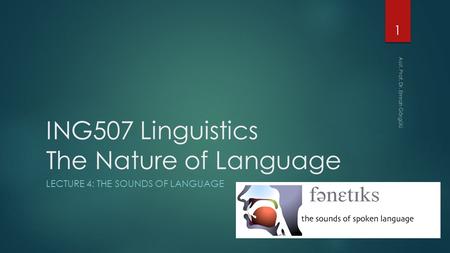