Presentation on theme: "SECTIONALISM Nationalism Vs.. Nationalism Unites the Country In 1815, President James Madison presented a plan to Congress for making the United States."— Presentation transcript:

2 Nationalism Unites the Country In 1815, President James Madison presented a plan to Congress for making the United States economically independent. The plan was promoted as the “American System.” Nationalism: feeling of pride, loyalty, and protectiveness toward your country

3 3 Main Actions of the “American System” 1 – Establish a protective tariff, a tax on imported goods that protects a nation’s business from foreign competition 2 – Establish a national bank that would promote a single currency making trade easier. 3 – Improve the country’s transportation system. Poor roads made transportation slow and costly.

4 Road and Canals Link Cities “Let us bind the Republic together for better transportation system,” proclaimed Rep. Calhoun of South Carolina in 1817. By 1841, the National Road, designed as the country’s main east-west route, had been extended to Vandalia, Illinois.

6 The massive Erie Canal created a water route between New York City and Buffalo, New York. The Erie Canal was important because it opened trade between the Ohio River Valley and the Great Lakes Region. It also fueled nationalism by unifying these 2 sections of the country.

7 Around the 1830s, the nation began to use steam- powered trains for transportation. By the 1850s, there were over 9,000 miles of track in the United States.

8 Sectionalism At the same time nationalism was unifying the country, sectionalism was threatening to drive it apart. Sectionalism is loyalty to the interests of your own region or section of the country, rather than to the nation as a whole. Economic changes had created some divisions within the United States. Examples – cotton and slavery in the South, manufacturing and trade in the Northeast, cheap land and transportation in the West.

10 Sectionalism became a major issue when Missouri applied for statehood in 1817. People living in Missouri wanted to allow slavery in their state. At this time, there were 11 slave states and 11 free states. Adding Missouri as a slave state would upset the balance of power in Congress. The question of Missouri soon divided the nation.

11 The Missouri Compromise For months, the nation argued over admitting Missouri as a slave state or a free state. At the same time, Maine, which had been part of Massachusetts, also wanted statehood.

12 Henry Clay, Speaker of the House, saw an opportunity for compromise. He suggested that Missouri be admitted as a slave state and Maine as a free state. Congress passed this plan known as the Missouri Compromise. It kept the balance of power between the slave states and free states. It also called for slavery to be banned from the Louisiana Territory north to Missouri’s southern border.

13 The Monroe Doctrine The nation felt threatened at this time by sectionalism and by other events in the Americas. Read Page 359 In December 1823, President Monroe issued a statement that became known as the Monroe Doctrine.

Download ppt "SECTIONALISM Nationalism Vs.. Nationalism Unites the Country In 1815, President James Madison presented a plan to Congress for making the United States." 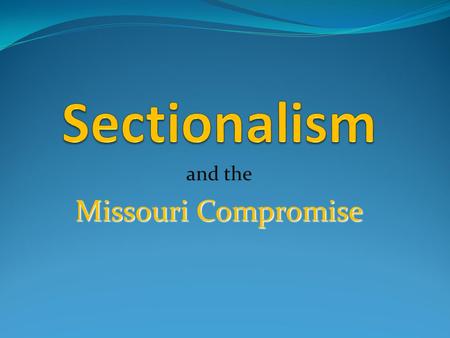 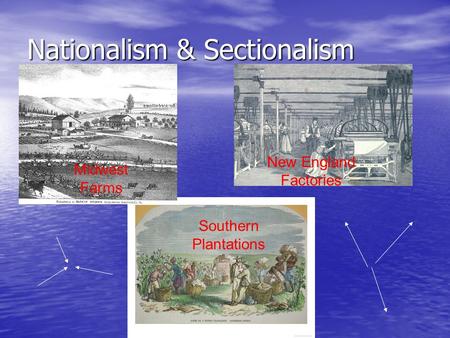 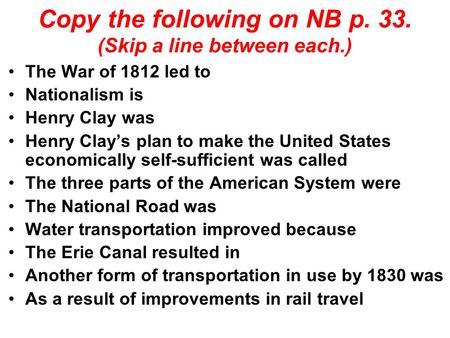 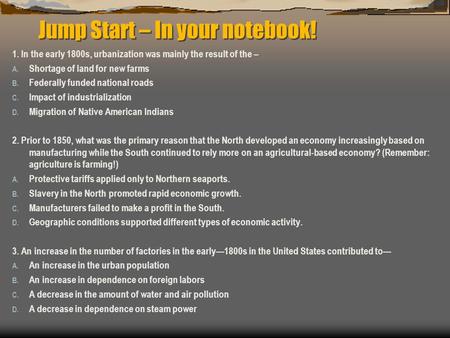 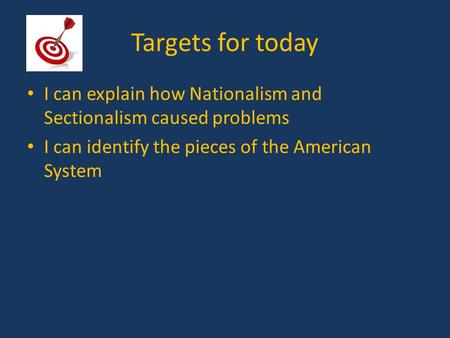 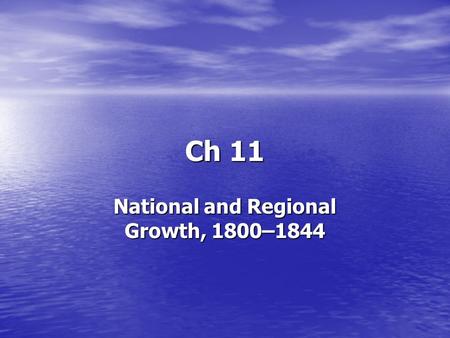 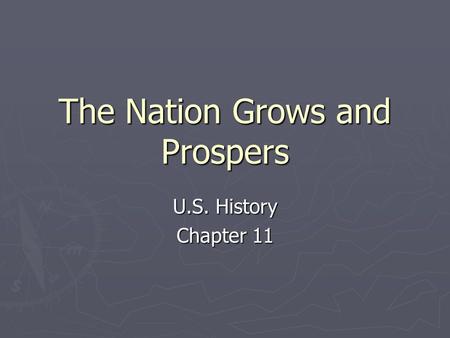 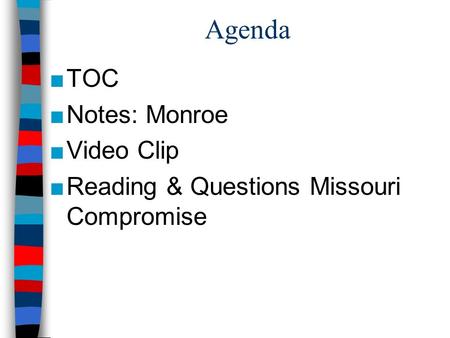 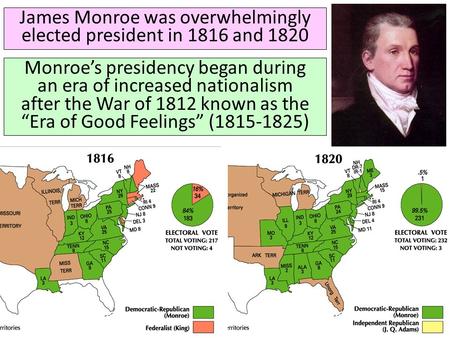