2 “WALL-E” How many different shots? What angles, types of shots?

3 NUMBER ONE QUESTION: What are you trying to communicate? Not just, what will look cool?

4 SHOT SIZES & TYPES A close up is a “tighter” shot while a medium full or full is a “looser” shot Can apply to whatever subject or object-- animals, bugs, a box of cereal

5 Establishing Shot A wide angle shot that shows the location of the scene. Helps to familiarize the audience with where the scene is taking place

8 Close-up (CU) Includes the subject’s head, neck and sometimes shoulders Get’s into the emotional space of the character

9 Extreme Close-up (ECU) Includes only part of the subject’s face Heightens facial expressions and intensity of actions Beginning students are afraid of close ups, meaning they don’t use them enough.

11 Two Shot Includes two actors and shows their relative distance from one another It’s usually a medium shot A three shot has three characters, etc..., up to a “crowd shot”

12 Over the Shoulder (OTS) Includes two actors, but the face of one and the back of the head/shoulder of another Also called a “dirty shot” (compared to a “clean shot” that is not OTS) Psychologically brings characters closer together

13 Point of View (POV) The camera captures what one of the characters sees from their perspective The other character is often looking straight into the camera, if there is another character Cinema constantly goes in and out of POV mode

15 Cut In (CI) A shot of an object in the scene that is within the action Ex--hand pulling a gun from a drawer, or hands typing a letter

18 Bird’s Eye or Aerial The camera points directly down onto a scene or subject, like a bird looking down onto the scene

19 Worm View or Crotch Shot The camera points directly upward, looking straight up at the subjects Worm/bird...get it! Most shots are at “eye level”

21 Camera Movement Motivation is key! The camera should only move it if has a reason to Does it follow action, reveal something, shift focus to another part of the scene, or have an emotional effect? Just because it can move doesn't’ mean it should Good camera work often goes unnoticed

24 The Rule of Thirds Avoid placing the subject dead center in the frame (there are exceptions--news anchors) In a close up, the eyes often fall on the top line

25 The Rule of Thirds The horizon of a landscape usually should NOT be in the center of the frame Exaggerate either the sky or the ground, for example

26 Leading Looks Directs the eye and indicates where character is looking off- screen (vector) More ease when room for leading look, more tension when not Especially important with moving shots Often will motivate an edit.

29 CLOSING WORDS Be conscious of what your shooting and how; each choice changes the effect of the shot on your audience A few minutes usually makes the difference between a good shot and a bad shot Let your instincts guide you 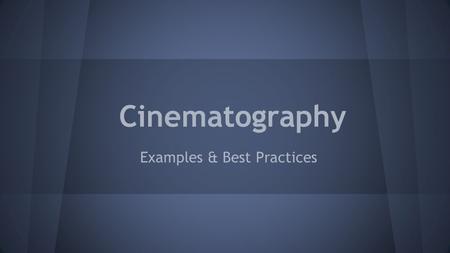 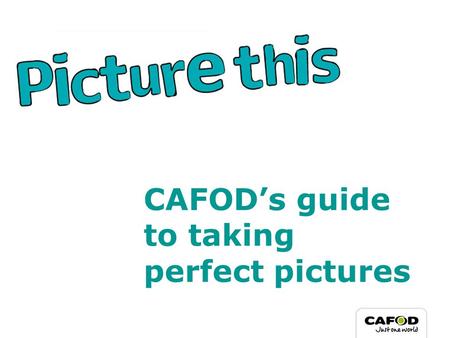 CAFOD’s guide to taking perfect pictures. Holding your camera o Always hold the camera steady with two hands, preferably with the strap around your neck, 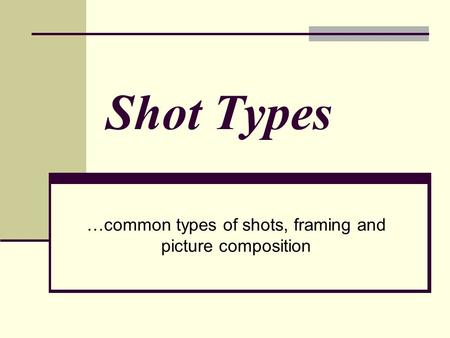