3 Student Freedom of Expression Issue: Hateful, provocative and offensive speech: What can and cannot be banned? Library Censorship: Is there a student right to know?

4 Class Questions Can schools legally limit student expression or symbolic speech? Do school officials have to wait until a disruption has occurred before acting? Can demonstrations be prohibited near the school grounds? Are fighting words protected by the 1st Amendment?

6 Tinker Case Issue: Does freedom of speech apply to students in the classroom? Rule: The First Amendment applies to public schools, and thus administrators have to demonstrate constitutionally valid reasons for any specific regulation of speech in the classroom. It is unconstitutional to prohibit students’ freedom of expression, unless there is evidence that a forbidden expression would materially and substantially interfere with the works of the school or the rights of others.

7 Limitations to Tinker Doctrine Subsequent Court decisions have determined limitations on the scope of student free speech rights. In Bethel School District v. Fraser, a 1986 case, the Supreme Court held that a high school student's sexual innuendo–laden speech during a student assembly was not constitutionally protected. While the Fraser court distinguished Tinker, the Fraser court carved out an exception for "indecent" speech. Hazelwood v. Kuhlmeier, the court ruled that schools have the right to regulate, for legitimate educational reasons, the content of non-forum, school-sponsored newspapers.Bethel School District v. Fraser1986Hazelwood v. Kuhlmeier

8 Pyle v. South Hadley Case Issue: Whether, under Mass. Law, public high school students are free to engage in any expression they choose, even if deemed vulgar by the school, so long as the speech is neither disruptive nor school-sponsored. Holding: Massachusetts law protects students’ rights to engage in vulgar, non- school sponsored speech so long as it does not cause a disruption at school.

10 Class Activity Results School officials may restrict freedom of expression where there is evidence of material and substantial disruption, indecent or offensive speech, violation of school rules, destruction of school property, or disregard for authority.

11 Class Activity Results Buttons, pamphlets, and other insignia may be banned if the message communicated is vulgar or obscene, or mocks others based on race, origin, sex, or religion. School policies that address these issues should be developed and communicated to students and parents.

12 Class Activity Results Unsubstantiated fear and apprehension of disturbance are not sufficient grounds to restrict the right to freedom of expression.

13 Hate Speech Codes General Rule: Hate speech codes are constitutional so long as they are narrowly tailored to prohibit unprotected speech such as fighting words, threats, intimidation, or speech that cases substantial disruption.

14 Student Freedom of the Press How free are students to distribute unpopular or controversial views in school-sponsored and underground publications? Class Activity: Taylor Article

16 Basic Rules Schools have the authority to restrict student social organizations that try to create “exclusive” membership. Schools are permitted to regulate or restrict student organizations by requiring them to follow reasonable regulations to ensure that school facilities are being used responsibly and equitably.

17 Basic Rules Contd. Student groups failing to comply with school regulations can be disciplined and barred. Schools may refuse to recognize a student organization if there is evidence that the group is likely to be disruptive, break reasonable rules, interrupt classes, or substantially interfere with other students’ rights.

18 Basic Rules Contd. All student groups must be treated equally when seeking school recognition and cannot be discriminated against because of their viewpoint.

19 Student Dress and Grooming In general, the courts have found that grooming requirements are a reasonable way for school authorities to teach hygiene, instill discipline, and compel uniformity. While students are under the control of school authorities, the students may be required to follow certain grooming and dress code rules.

20 Student Grooming Contd. Some courts have upheld school policies that require students to wear designated uniforms and not to wear low-necked dresses or immodest styles of dress. Generally, the regulations must promote orderly conduct of the educational process and must not be arbitrarily applied.

21 Student Grooming Administrative Guide Local school dress codes should be approved by the school board. Policy should be communicated and discussed with students and parents. Dress codes will be supported by the courts only when there is evidence that they are reasonable. Appearance that does not conform to rudiments of decency may be regulated. Examples? Dress that mocks others on the basis of race, gender, religion, color, national origin prohibited. 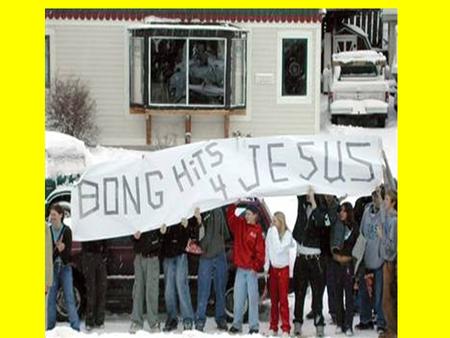 Student Expression Opinion of the Court The wearing of armbands was "closely akin to 'pure speech'" and protected by the First Amendment. 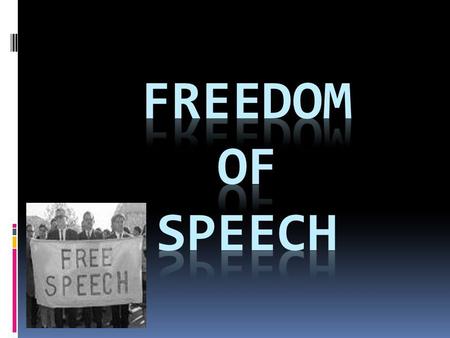 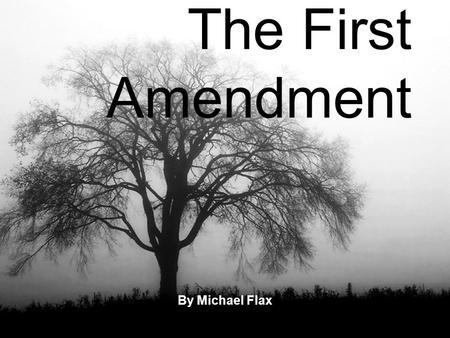 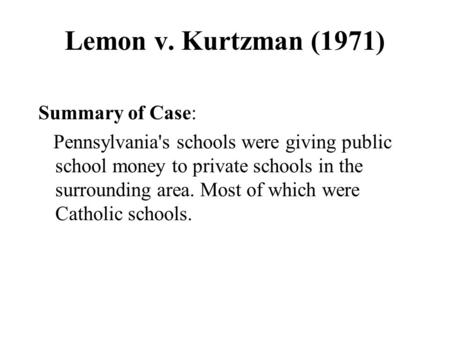 Lemon v. Kurtzman (1971) Summary of Case: Pennsylvania's schools were giving public school money to private schools in the surrounding area. Most of which. 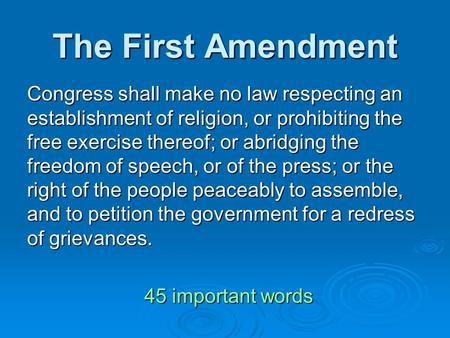 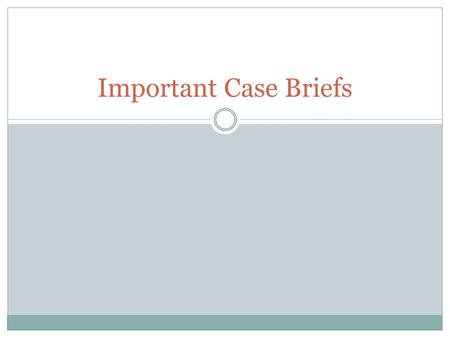 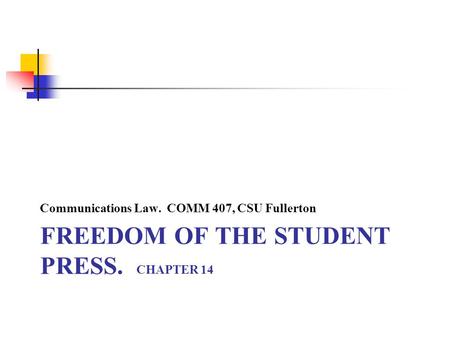 FREEDOM of the student press. CHAPTER 14 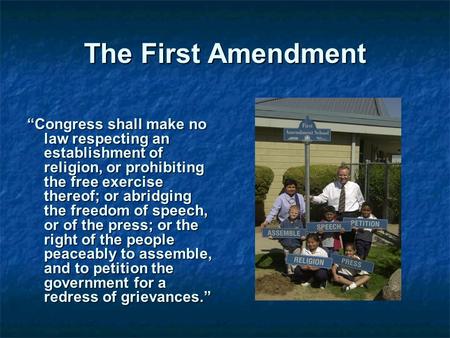 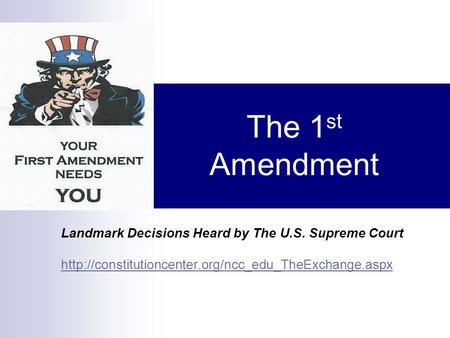 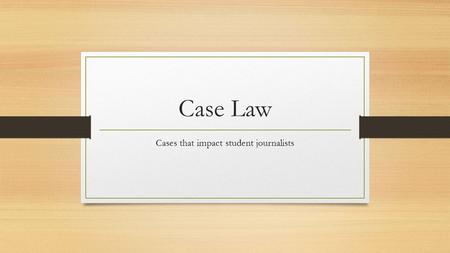 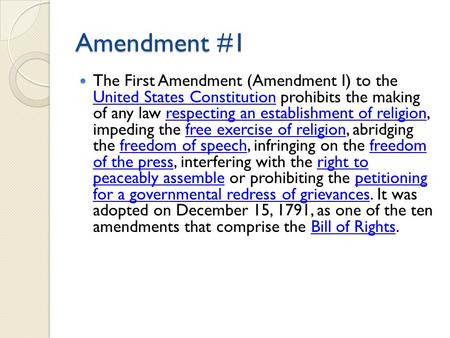 Amendment #1 The First Amendment (Amendment I) to the United States Constitution prohibits the making of any law respecting an establishment of religion, 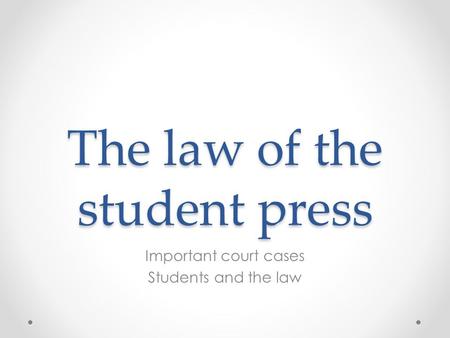 The law of the student press Important court cases Students and the law. 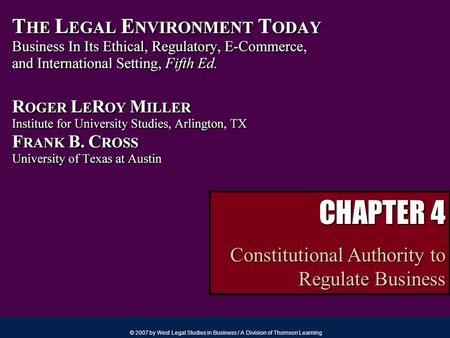 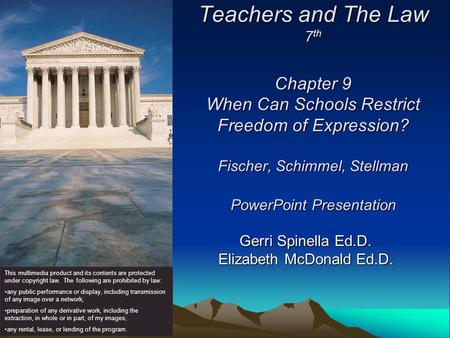 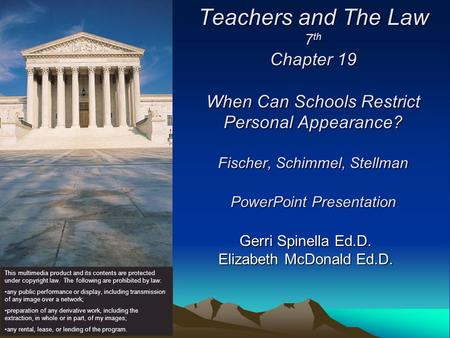 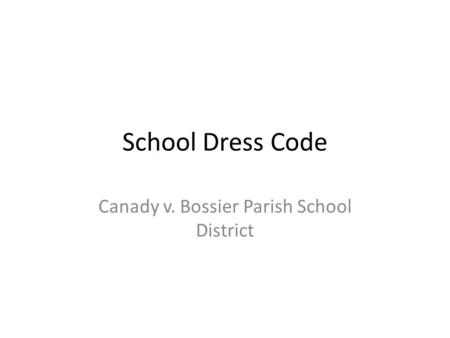 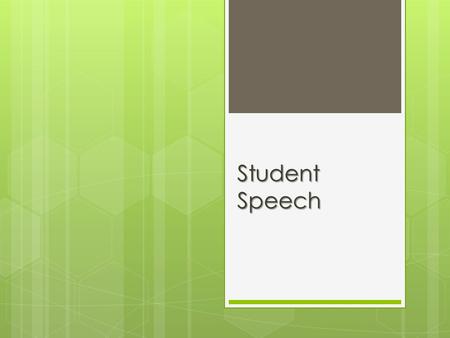 Student Speech. Read the article at your desk  Not safe to display American flag in American high school. 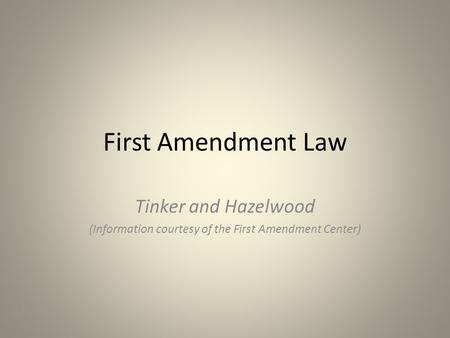 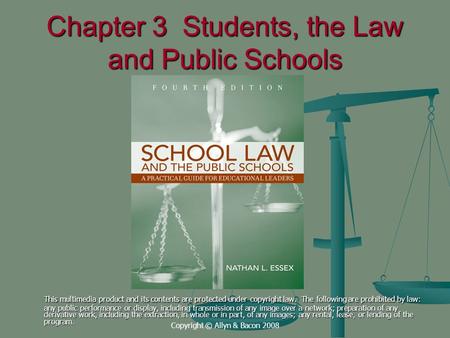 Copyright © Allyn & Bacon 2008 Chapter 3 Students, the Law and Public Schools This multimedia product and its contents are protected under copyright law. 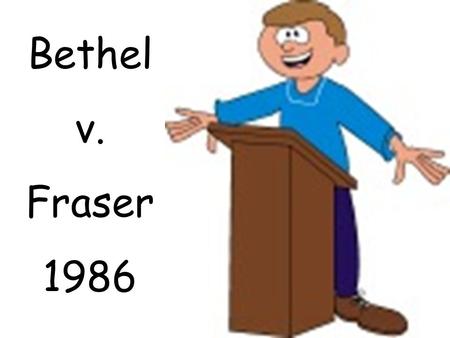