3 What is a Family? The U.S. Census Bureau defines family as two or more individuals related by blood, marriage, or adoption living in the same household. According to sociologists, family is defined as a social group whose members are bound by legal, biological, or emotional ties, or a combination of all three. People in sociologists’ definition of family may or may not share a household, but its members are interdependent and have a sense of mutual responsibility for one another’s care. This more open-ended definition takes into account the diversity among today’s families. 3

4 What is the Family? An extended family is a large group of relatives, usually including at least three generations living either in one household or in close proximity. Kin is defined as relatives or relations, usually those related by common descent. Extended family most commonly includes a family with children and one or more sets of grandparents, although that is not the only arrangement. When you think of kin, you might think of family that you would run into at a reunion. You may know some of the people that you see, but there are also probably people you don’t know, or at least that you don’t know well. However, some common ancestry ties you together and makes you kin or “kinfolk.” 4

6 Diversity in Families Endogamy refers to marriage to someone within one’s social group (race, ethnicity, class, education, religion, region, or nationality). Exogamy refers to marriage to someone from a different social group. Which type is more common? Why? Endogamy tends to be more common for a variety of reasons. We still tend to have de facto segregation in our society (segregation as a result of housing patterns, economic patterns, etc.), so we tend to meet people of similar backgrounds. There are also social pressures to marry people of similar backgrounds. Exogamy is becoming more commonly acceptable, but is still less common than endogamy. 6

7 Diversity in Families From the time of slavery through the 1960s, many states had antimiscegenation laws (the prohibition of interracial marriage, cohabitation, or sexual interaction). Anti-miscegenation laws were effectively ended by the Supreme Court case Loving vs. Virginia. Loving v. Virginia, 388 U.S 1 (1967), was a landmark civil rights case in which the United States Supreme Court, by a 9-0 vote, declared Virginia’s antimiscegenation statute, the “Racial Integrity Act of 1924", unconstitutional, thereby ending all race-based legal restrictions on marriage in the United States. 7

8 Diversity in Families Monogamy, the practice of marrying (or being in a relationship with) one person at a time, is still considered the only legal form of marriage in modern western culture. Polygamy, a system of marriage that allows people to have more than one spouse at a time, is practiced among some subcultures around the world, but is not widely acknowledged as a legitimate form of marriage. You may hear of polygamous relationships, even in the United States. Individuals may claim to be married to multiple people, but those ties would not have legal meaning and would not hold up in a court. 8

9 Diversity in Families The more common form of polygamy is polygyny, which a system of marriage that allows men to have multiple wives. Polyandry, a system of marriage that allows women to have multiple husbands, is a more rare form of polygamy. It is important to recognize that families (eg: form) reflect the society they come from. 9

11 Sociological Perspectives on the Family
Structural Functionalism views the family as one of the basic institutions that keeps society running smoothly by providing functions such as producing and socializing children, economic production, instrumental and emotional support, and sexual control. 11

12 Sociological Perspectives on the Family
Conflict theorists believe that society revolves around conflict over scarce resources, and that conflict within the family is also about the competition for resources: time, energy, and the leisure to pursue recreational activities. Inequality begins at home 12

13 Sociological Perspectives on the Family
Symbolic Interactionists examine the types of social dynamics and interactions that create and sustain families, emphasizing the ways that our experiences of family bonds are socially created rather than naturally existing. 13

15 Forming Relationships, Selecting Mates
The process of selecting mates is largely determined by society Two concepts (homogamy and propinquity) tell us a lot about how this process works. 15

16 Forming Relationships, Selecting Mates - Homogamy
Homogamy means “like marries like,” and is demonstrated by the fact that we tend to choose mates who are similar to us in: class, race, ethnicity, age, religion, education, and even levels of attractiveness. Propinquity is the tendency to marry or have relationships with people in close geographic proximity. Propinquity is logical; we are likely to find possible mates among the people in our neighborhood, at work, or at school. The internet makes courtship and romance possible across much greater geographical areas, as we can now meet and converse with people in all parts of the world, so our pool of potential mates moves beyond local bounds. But even this technology may intensify homogamy by bringing together people with very specific interests and identities. Since we know a little about how families are put together, let’s talk a bit about how they work. 16

17 Doing the Work of Family
Many types of work (both paid and unpaid) are necessary to keep a family operating. These tasks can be either instrumental or expressive. Ideally, men or women could perform either or both tasks as they see fit and feel comfortable, but we tend to see gender roles and expectations placing men into one category and women into the other. 17

18 Doing the Work of Family
Instrumental tasks refer to the practical physical tasks necessary to maintain family life (washing dishes and cutting grass). Expressive tasks refer to the emotional work necessary to support family members (remembering a relative’s birthday or playing with the kids). Can you guess which category is usually considered appropriate for men and which is considered appropriate for women? 18

20 Source: http://www.salary.com/2014-mothers-day-infographics/
Criticisms: Hello, median earnings for women with a college degree in 2007 employed full-time were about $48,500. How could stay-at-home moms this year be doing work with a market replacement value more than twice that? Two factors help explain this high estimate. First, respondents to the Salary.com survey reported longer hours of household work than stay-at-home moms in the latest American Time Use Survey (ATUS), collected from a nationally representative sample of the United States population. My estimates based on the 2007 ATUS data show that mothers living in a household with at least one child under 18 who were not in paid employment reported an average of 42.5 hours — not 96.4 hours — of household work a week. Second, the Salary.com estimates assume that all household work over 40 hours a week (in this case, 56.4 hours!) represents “overtime” that should be valued at 1.5 times normal market wage rates. This is not an unreasonable proposition, but not one that academic researchers like myself normally make. Source:

24 Trouble in Families Domestic violence is by far the most common form of family violence. It includes behaviors abusers use to gain and maintain power over their victims. Abuse can be: Physical Verbal Financial Sexual Psychological 24

26 U.S. Divorce Rate Over the Past Century

29 Trends in American Families
About 8% of all households are occupied by couples who are cohabitating (living together as a romantically involved, unmarried couple). More than 11 million people are living with an unmarried partner, including both same-sex and different-sex couples 29

31 Cohabitation in the United States

33 The Postmodern Family Families adapting to the challenges of a postmodern society may create family structures that look very different from the “traditional” family and can include ex-spouses, new partners and children, other kin, and even non-kin such as friends and coworkers. 33

34 Lesson Quiz 1. How do contemporary sociologists define family?
a. Relatives or relations, usually those related by common descent b. A social group whose members are bound by legal, biological, or emotional ties, or a combination of all three c. Two or more individuals related by blood, marriage, or adoption living in the same household d. A two-parent household with children ANS: B 34

35 Lesson Quiz 2. The fact that people tend to marry someone from a similar social class background demonstrates: a. endogamy b. polygyny c. polyandry d. exogamy ANS: A 35

36 Lesson Quiz 3. The prohibition of interracial marriage, cohabitation, or sexual interaction is called: a. antimiscegenation b. antifulcrumation c. antiinternization d. antipolygamation ANS: A 36 36

37 Lesson Quiz 4. Which of the following is NOT a current trend in the population of American families? a. There are more single people. b. There are more married couples. c. More people are cohabitating. d. Modern families include a greater variety of structures, like new partners, ex-spouses, and step- children. ANS: B 37 37

38 Lesson Quiz 5. The unpaid labor inside the home that is often expected of women after they get home from working at paid labor outside the home is called: a. gendered work b. instrumental work c. a resistance strategy d. the second shift ANS: D 38 38

39 Some Reflections The family too is socially constructed.
Its form and structure reflects the society and culture it emerges out of. Who we marry is largely structured by society. The Family as an institution is undergoing fundamental change. 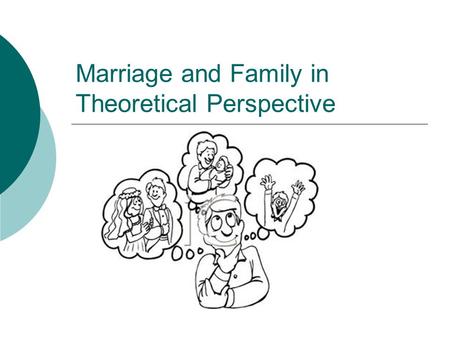 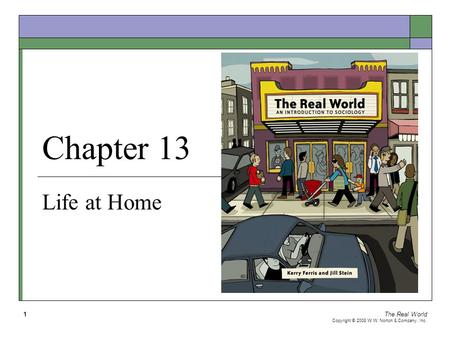 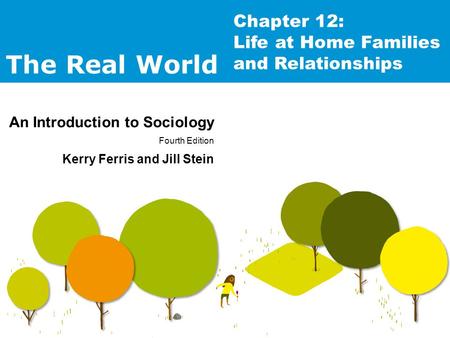 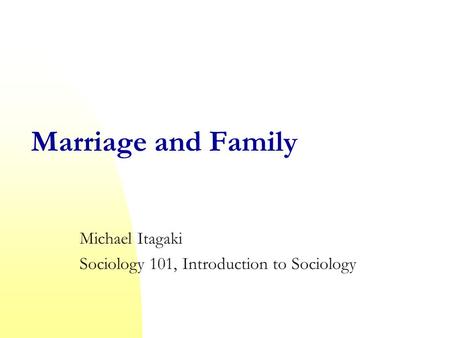