Presentation on theme: "Socratic Seminar By participating in Scholars will practice academic behavior and language that will be expected in a 21 st century classroom & worksplace."— Presentation transcript:

1 Socratic Seminar By participating in Scholars will practice academic behavior and language that will be expected in a 21 st century classroom & worksplace.

3 Warm Up Reflection: TOPIC: Based on Mark Twain’s satirical essay, “The Lowest Animal,” what hinders humans’ pursuit of JUSTICE? INTRODUCE EVIDENCE: Do you dis/agree with Twain’s ironic hypothesis? Why or why not? EVIDENCE: Provide examples and evidence from experiences and/or the text to support your evaluation. ANALYSIS: Explain the example/evidence proves your point of view. COMMENTARY: Despite the obvious humorous tone, what message or caution does Twain’s “The Lowest Animal” provide for contemporary America?

4 What is a Socratic Seminar? Socratic seminar is a method of teaching developed by Socrates. He engaged his students in intellectual discussion by responding to questions with questions, instead of answers. This method encouraged the students to think for themselves rather than being told what to think.

5 By participating in a Socratic Seminar you will practice academic behavior that will be expected in college and/or the workplace environment. This behavior includes: LISTENING, ASKING, AND DISCUSSING

6 YOU SHOW ACADEMIC BEHAVIOR by a.Participating when it is your turn to speak. b.Expressing yourself clearly in sophisticated language. c.Respecting others by avoiding side conversation and rude behaviors such as negative body language. d.Speaking when it only when it is your turn and not interrupting or cutting someone off. e.Making logical comments that are related to the text and purpose being discussed.

10 In your groups, choose the FOUR BEST questions for discussion: 5 Minutes Students will generate three prompts on the right-hand side of their Cornell Notes by using Question Guide. –Students should keep the OBJECTIVES for the Seminar in mind when designing their discussion prompts. –Students will explore the universal concept of the human nature as its is exhibited in Arthur Miller’s play The Crucible. – Additionally, students will evaluate the influence of early American texts and ideas on themes and archetypal characters in The Crucible.

11 TEAM LEAD Make sure each team member has all questions answered and provides quotes or evidence from the text or from real life experiences. Choose how you want the answers created: –Everyone answers together? –Each person answers one question and provides it for the rest of the group?

12 I DO: Directions for Socratic Seminar

14 INNER CIRCLE: YOU SHOW ACADEMIC BEHAVIOR by a. Contributing to discussion at least three times with questions, comments, or opinions. [ ] YES b.Expressing themselves clearly in sophisticated academic language. [ ] YES c.Respecting others by avoiding side conversation and rude behaviors. [ ] YES d.Speaking only when it is their turn and bringing others into the conversation without interrupting or cutting someone off.. [ ] YES e.Making logical comments that are related to the topic and issue being discussed and are backed up though evidence from the text.. [ ] YES

16 PART THREE OBJECTIVES: –Discuss the VIEW OF JUSTICE as its is exhibited in Mark Twain’s “The Lowest Animal”. –Evaluate the influence of REALIST texts and ideas on American culture, society and literary themes. 1.) According to “The Lowest Animal” are human beings capable of JUSTICE? 2.) What institutions and social systems does Twain’s narrator identify as hindering JUSTICE? 3.) Do you agree with the overall claim of the essay? Defend your answer!

17 Sentence Frames to use as needed To state an opinion I believe ____ because… I agree/disagree because… I understand your point that ____; however,_____. Although I agree with ___, I also believe that … To ask a question I am confused about … Can someone explain… I have questions about… What does it mean when __says…? When you__do you mean…? To explain/elaborate I’d also like to add that… Evidence such as ____ suggests… When ___, it is clear that… Perhaps ___ can be interpreted as … Another way to look at ____ is …

Download ppt "Socratic Seminar By participating in Scholars will practice academic behavior and language that will be expected in a 21 st century classroom & worksplace." 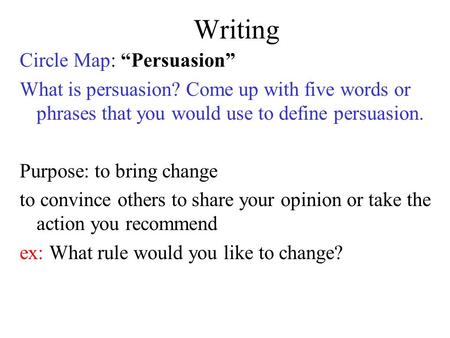 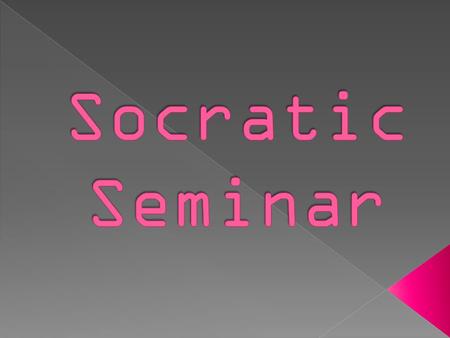  A Socratic seminar is a form of discussion created by Socrates in fifth century B.C.  He believed that the best way for students to learn was by developing. 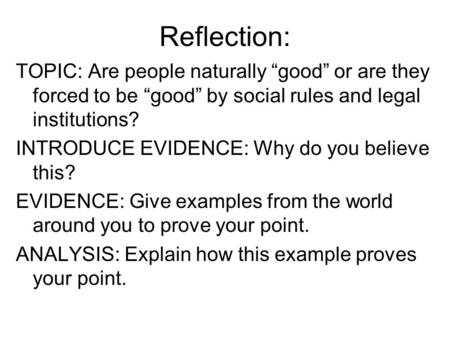 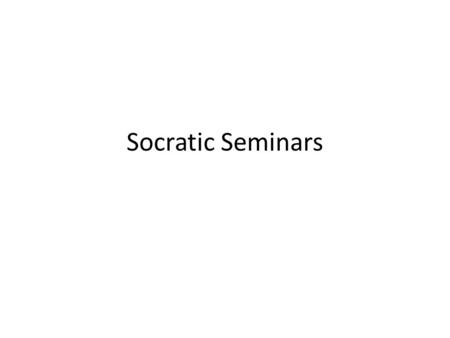 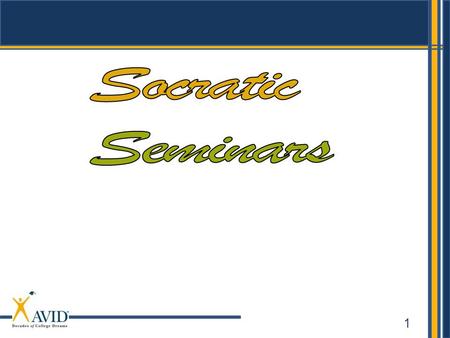 1. 2 The Vision Socrates believed that enabling students to think for themselves was more important than filling their heads with “right answers.” 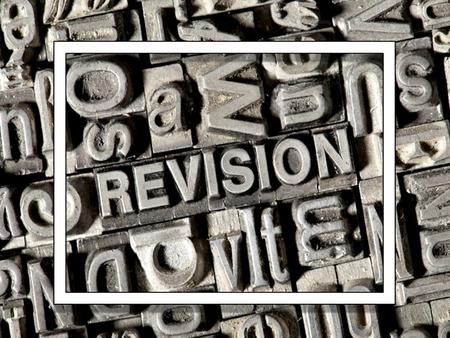 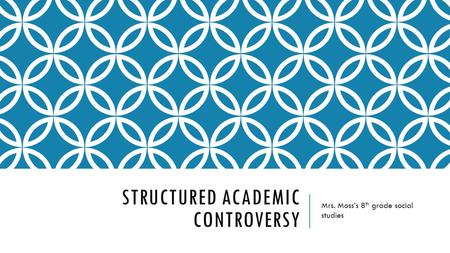 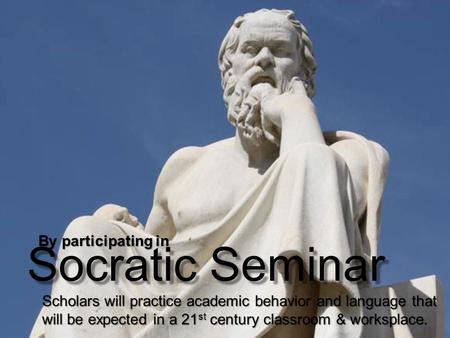 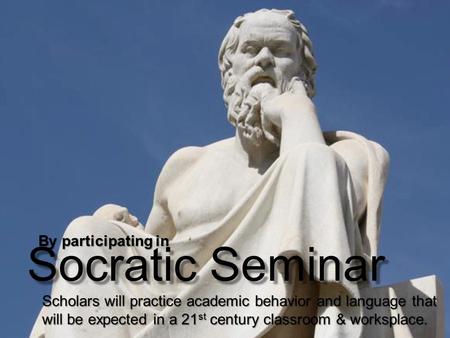 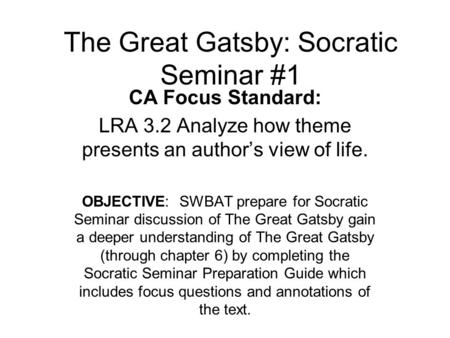 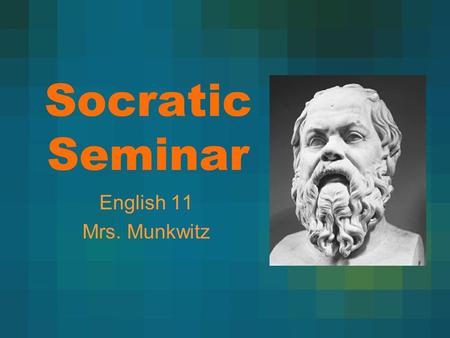 Socratic Seminar English 11 Mrs. Munkwitz. “ A Socratic discussion is a text-based discussion in which an individual sets their own interpretations of. 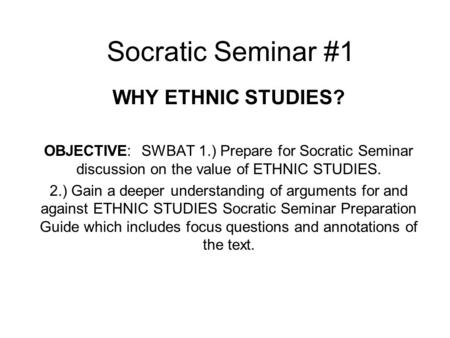 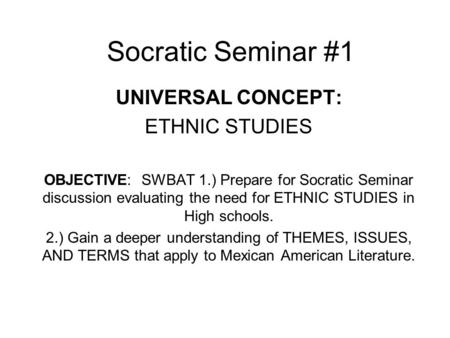 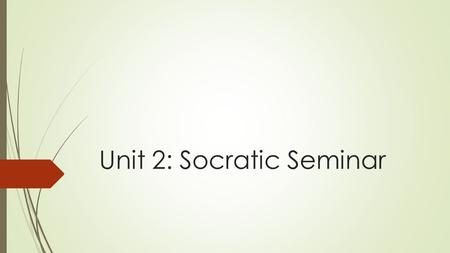 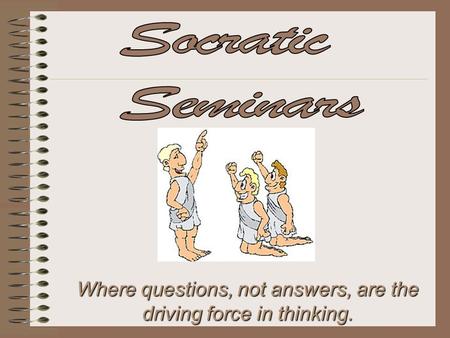 Where questions, not answers, are the driving force in thinking. 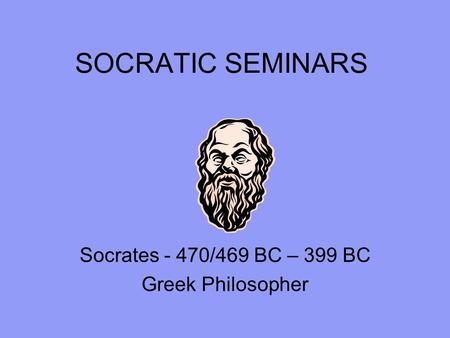 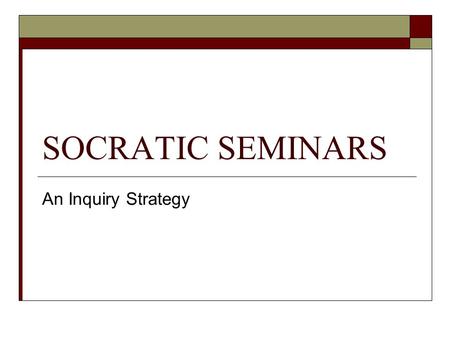 SOCRATIC SEMINARS An Inquiry Strategy. Socratic Seminar Vision  Socrates believed that enabling students to think for themselves was more important than. 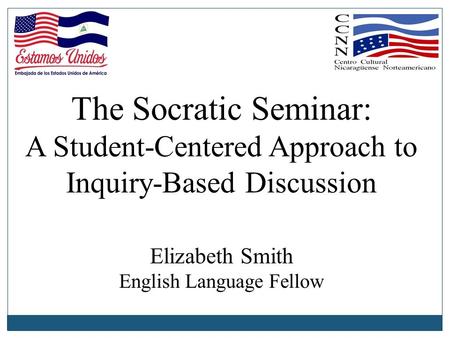 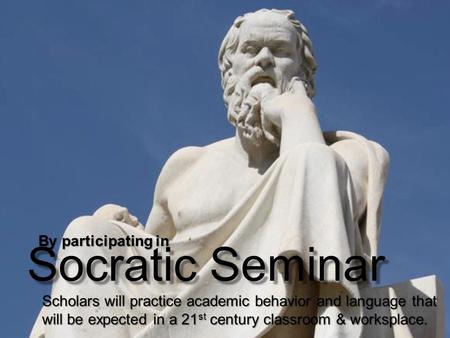 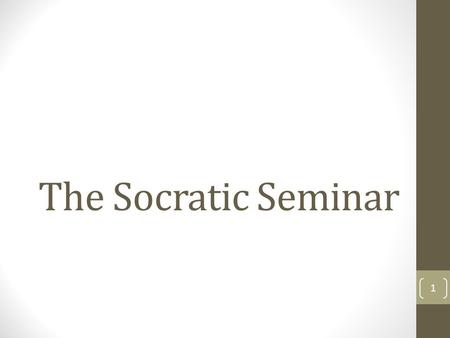 The Socratic Seminar 1. Socrates Socrates was a famous Greek philosopher. His focus was the development of the human character. His method of teaching.