Chapter 2 An Overview of the Financial System 1. In this chapter we continue with introductory material. We will see a lot of terms defined and we will.

Presentation on theme: "Chapter 2 An Overview of the Financial System 1. In this chapter we continue with introductory material. We will see a lot of terms defined and we will."— Presentation transcript:

1 Chapter 2 An Overview of the Financial System 1

2 In this chapter we continue with introductory material. We will see a lot of terms defined and we will study concepts related to our financial system in the United States, and even look at some international financial concepts. On page 25 of the book the author has the following (and I put spacing in for impact): Financial markets perform the essential economic function of channeling funds from households, firms and governments (lender-savers) that have saved surplus funds by spending less than their income to those that have a shortage of funds (borrower-spenders) because they wish to spend more than their income. Note that foreign citizens and governments can be on either side of the channeling of funds here. 2

4 4 Last chapter I mentioned the bond market. The bond market is just one specific debt market. Another would be a mortgage market. A debt instrument is a contractual agreement by the borrower to pay the holder of the instrument fixed dollar amounts at regular intervals until a specified date. The maturity date of a debt instrument is the specific date when the contractual obligation is over. The maturity is the number of years until the maturity date. The term of the debt obligation from the date of issue until the maturity date is i)Short-term if the time is a year or less, ii)Intermediate-term if the time is between 1 and 10 years, and iii)Long-term if the time is 10 years or more. The equity market is where stocks of various types (common or preferred, for example) are used. Sometimes a stock owner will receive a dividend, a payment out of the current profits of the corporation. Note that debt holders have a defined benefit (as spelled out in the agreement defining the instrument), while the equity holders are residual claimants (meaning they only earn if there is profit). Facts: at end of 2010 in United States $43 trillion in debt and $17.2 trillion in equities outstanding.

6 6 An exchange is a central location where buyers and sellers meet. An over-the-counter (OTC) market has dealers in many locations willing to buy or sell instruments. A money market is a financial market in which only short-term (maturity of a year or less) debt instruments are traded. Equities such as common stock are excluded here because they have no maturity. A capital market is a financial market where equities and intermediate and long-term debt instruments are traded. Now let’s study examples of money market instruments. U.S. Treasury Bills – the U.S. government issues one-, three-, and six-month maturities to finance operations. These bills pay a set amount at maturity and have no other payment. While it is stated that there is no interest payment, because the issue price is often lower, or at a discount, when the maturity payment is made an effective interest payment is made. For example, if a six-month bill pays $10,000 at maturity but is issued for $9,000, then in effect $1000 in interest has been earned.

7 7 By the way, default is a situation in which the issuing party is unable to make interest payments (in a more general sense than just Treasury Bills) or pay off the amount owed at maturity. A certificate of deposit (CD) is a debt instrument sold by a bank to depositors that pays annual interest and at maturity pays back the original purchase price. Negotiable CDs are those sold in secondary markets. Commercial paper is a short-term debt instrument issued by large banks and well-known corporations. So, in my mind commercial paper is similar to U.S. Treasury Bills! Repurchase agreements, repos, are short-term loans for which Treasury Bills serve as collateral. Collateral is an asset that the lender would be paid back if the borrower can not make the agreed upon repayment. Federal Funds, or Fed Funds, are overnight loans between banks of their deposits at the Federal Reserve. Let’s look at some details of Fed Funds on the next slide.

8 8 When people like you and me put money in our bank the bank then puts the money in the vault and calls the actual paper reserves. Sometimes these reserves are taken from the bank and put into a Federal Reserve bank. Our bank would then have an asset at the Federal Reserve. Well banks have to have a minimum level of reserves (they lend out much of the money we give them) and when a bank has less than the minimum it might borrow from another bank that has more than the minimum. What happens, in essence, is that at the Federal Reserve funds are transferred from one bank’s account (the lending bank) to the other (the borrowing bank). So, federal funds are just funds one bank lends to another and the rate of interest charged is called the fed funds rate. Next let’s mention some capital market instruments.

9 9 Stocks are equity claims on the net income and assets of a corporation. Mortgages are loans to households or firms to purchase land, housing, or other structures, in which the structure or land itself serves as the collateral for the loans. Mortgage-backed securities are bond like debt instruments backed by a bundle of mortgages where interest and principle payments are collectively paid to the holders of the securities. Long-term corporate bonds have maturities of 10 or more years. The author tells us a typical corporate bond sends the holder interest payments twice a year and pays off the face value when the bond matures. Some bonds are convertible, having the feature that they can be converted to a specified number of shares of stock at any time up to the maturity date.

10 10 U.S. Government Securities are long-term debt instruments issued by U.S. Treasury. U.S. Government Agency Securities are similar to the above, but issued by specific agencies of government. State and Local Government bonds are issued to finance schools, roads and other large programs. These bonds are often called municipal bonds, or muni’s, and currently interest earned on the bonds are tax free at the federal level and sometimes in the states where they are issued. Consumer and Bank Commercial loans are made to businesses and households for various reasons. Please read the “Following the Financial News” section on page 33. You see the big 5 capital market interest rates often mentioned in the media.

11 11 Now we briefly touch on some international issues. Note that money and investment flows have occurred for centuries and is an important source of funds for governments and businesses today. A foreign bond is a bond issued in a country by an entity from outside a country and denominated in the host country’s currency. An example would be a German automaker sells bonds in the U.S. and denominated in U.S. dollars. A Eurobond is a bond denominated in a currency different from the host country’s currency. A Eurocurrency is a currency deposited in a bank outside of the home country. When U.S. dollars are deposited in banks outside the U.S. the dollars are called Eurodollars. These deposits often earn interest for the depositor. Hey, the Eurobond and Eurocurrency are not directly related to the currency called the Euro.

13 13 Risk is the idea that there is uncertainty about the returns of an investment. Because financial intermediaries specialize and often have lower transaction costs they can take on more risk than others and still make a profit (due to lower costs). Asymmetric information is a situation where one party to a (potential) transaction does not know enough about the other party to (always) make accurate decisions. Borrower- spenders likely know more about returns and risks of their potential investment projects for which they will use the funds than does the lender-saver who brings funds into the transaction, for example. Lack of information by a party can lead to two types of problems in financial systems, a problem before a transaction is entered into and a problem that arises after a transaction has been made. Adverse selection is the term used to describe the problem that occurs before (sometimes called ex ante) a transaction takes place. In our context here potential borrowers who are the most likely to produce undesirable, or adverse, outcomes are the ones most actively seeking a loan and are thus most likely to be selected. Please see the example on pages 39-40 on this idea.

14 14 Moral hazard is the problem that occurs after the transaction happens. Essentially an actor changes behavior after getting into the transaction and this could be a problem for the other party to the transaction. Please see the example on page 40. Financial intermediaries may be better equipped to deal with the problems of adverse selection and moral hazard and thus individual borrower-spenders and lender-savers can reap some benefits that they might not get without intermediation. Economies of scope occur when overall costs go down when 2 or more items are produced together rather than producing each separately. Financial intermediaries can achieve this when gathering information, for example. A conflict of interest may occur when an entity has multiple objectives and competition among the objectives may mean the entity will not be completely candid in its operations. Financial intermediaries need to guard against this phenomenon.

16 16 Finally, let’s have an initial look at regulation of the financial system. Please note on page 46 the agencies involved in regulation. I believe you would agree that we do not want crooks running our financial system. We also do not want companies to be too risky in their activities. Adverse selection and moral hazard can be problems. So, for financial intermediation to work and avoid financial panic (widespread collapse of financial intermediaries), perhaps we need regulation. Regulation may include -restrictions on entry (as to who can have a financial company) -disclosure, or reporting requirements -restrictions on assets and activities (as to what companies can do) -deposit insurance -limits on competition -restrictions on interest rates Well, we are still getting warmed up! Next we turn to the idea of money!

Download ppt "Chapter 2 An Overview of the Financial System 1. In this chapter we continue with introductory material. We will see a lot of terms defined and we will." 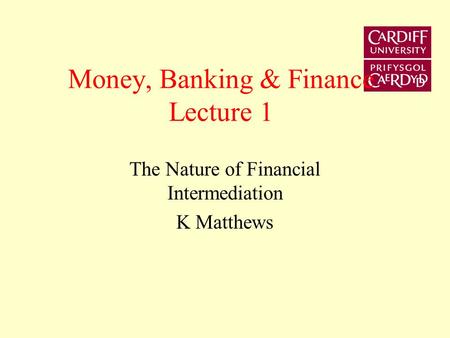 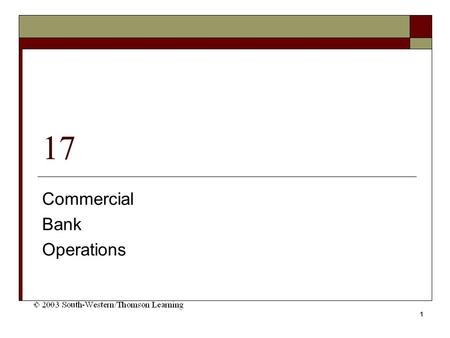 Chevalier Spring  Savings – refers to the dollars that become available when people abstain from consumption  Financial System – a network of. 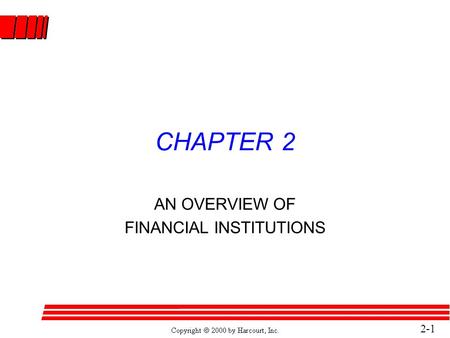 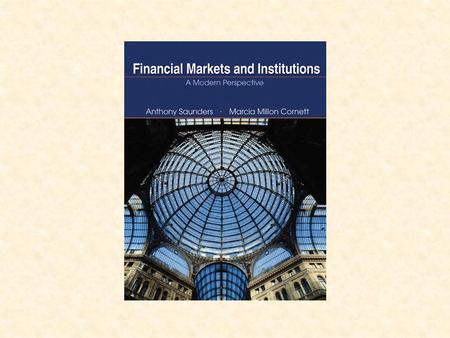 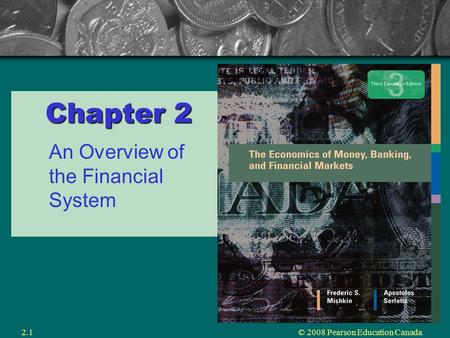 © 2008 Pearson Education Canada2.1 Chapter 2 An Overview of the Financial System. 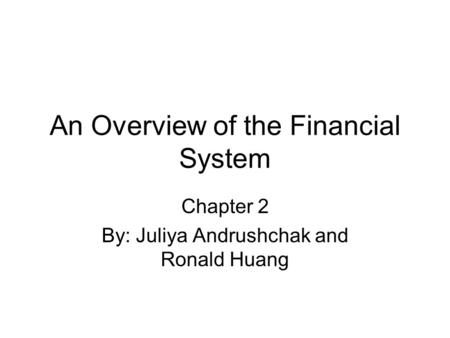 An Overview of the Financial System Chapter 2 By: Juliya Andrushchak and Ronald Huang. 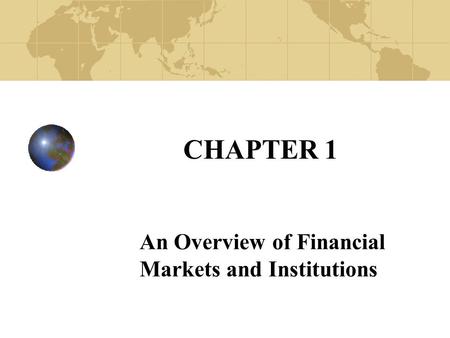 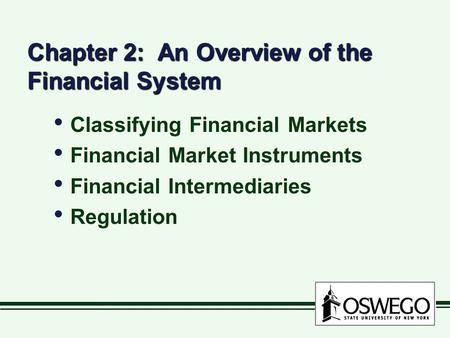 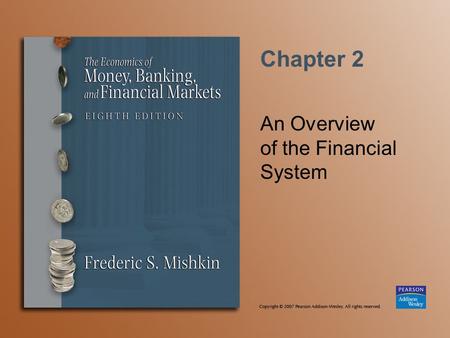 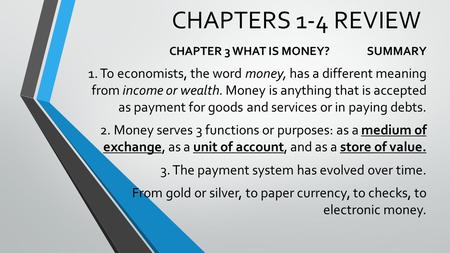 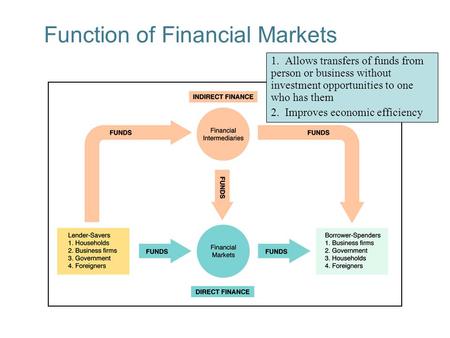 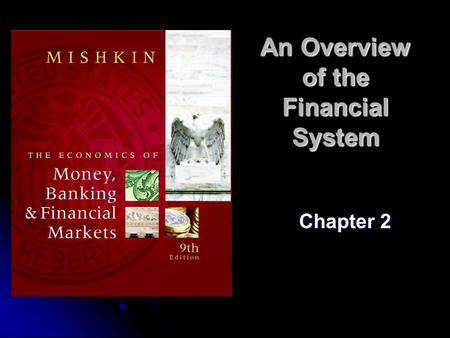 An Overview of the Financial System Chapter 2. 2 Function of Financial Markets To bring lenders and borrowers together to make both of them better-off. 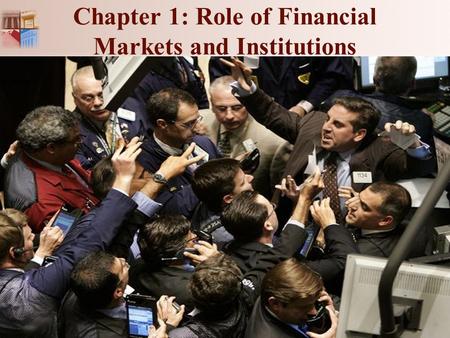 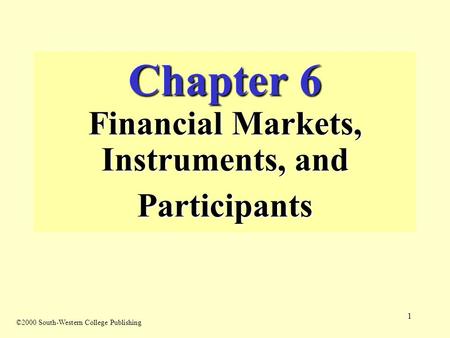 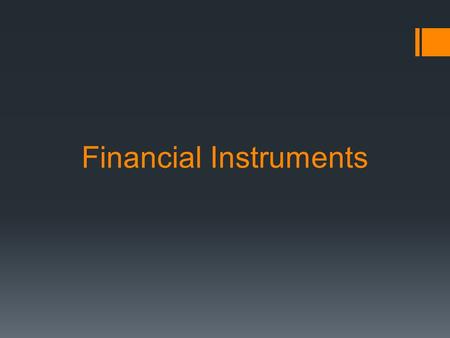 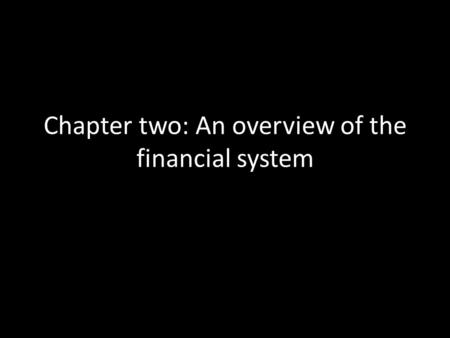 Chapter two: An overview of the financial system 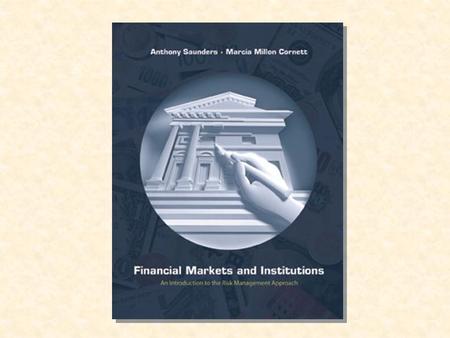 ©2007, The McGraw-Hill Companies, All Rights Reserved Chapter One Introduction.