Tutorial on How to Write a Response to Literature Essay

Presentation on theme: "Tutorial on How to Write a Response to Literature Essay"— Presentation transcript:

3 The Standards There are three sets of standards:
Structural features of literature Narrative analysis of grade-level-appropriate text Literary criticism

5 3.1 Articulate the relationship between the expressed purposes and the characteristics of different forms of dramatic literature (e.g., comedy, tragedy, drama, dramatic monologue).

6 3.2 Compare and contrast the presentation of a similar theme or topic across genres to explain how the selection of genre shapes the theme or topic.

7 Both of these standards require that you read more than one piece of literature.
3.1 is good for drama students. 3.2 is good for students who like to read lots of different things about the same topic or theme.

9 For 3.2, you need to read several pieces of literature about a similar theme or topic, for instance, losing family members at a young age. The genres of the pieces have to be different (a poem, a novel, a play, etc.). Then, in your essay, you would compare/contrast how the different genres presented the theme or topic. You would also need to discuss how a particular genre, for instance, maybe poetry, is better at presenting a particular topic or theme than another genre might be.

11 These standards are the ones that cover the types of essays you are most familiar with: essays that analyze the way a book is put together. Most of you write journal entries on these types of topics, so it should be easy to find journal entries that match one of the following standards.

13 3.3 Analyze interactions between main and subordinate characters in a literary text (e.g., internal and external conflicts, motivations, relationships, influences) and explain the way those interactions affect the plot. This standard focuses on characterization, so if you like to write about characters, and how the interaction between characters changes or drives the plot, then this is the standard for you!

14 3.4 Determine characters' traits by what the characters say about themselves in narration, dialogue, dramatic monologue, and soliloquy. What are character traits? They are similar to personality traits--emotions or actions that cause people to be who they are and act the way they do. Most authors do not spell out the personality of a character: “She was paranoid, rude, evil, and obsessed with money.” Instead, the author lets you come to that conclusion after you see how she acts in the book.

16 3.5 Compare works that express a universal theme and provide evidence to support the ideas expressed in each work. This is a standard that also requires you to read more than one piece of literature. If you’ve read a few books that have the same theme, for instance, 1984 and Brave New World and The Giver, then this essay asks you to provide evidence (quotes from the text, plot, etc.) that explain/support the theme.

17 3.6 Analyze and trace an author's development of time and sequence, including the use of complex literary devices (e.g., foreshadowing, flashbacks). This standard is good for a book that plays with the timing in the plot. Like The Odyssey, which starts in the middle of the story and then flashes back to the beginning, any book that doesn’t tell the plot in chronological order is a possibility for this standard.

18 3.7 Recognize and understand the significance of various literary devices, including figurative language, imagery, allegory, and symbolism, and explain their appeal. This standard covers any literary device you can think of, not just the four listed here. So you can include essays analyzing characterization, or plot, or theme, or metaphors, or anything else you can find in a list of literary devices.

19 3.8 Interpret and evaluate the impact of ambiguities, subtleties, contradictions, ironies, and incongruities in a text. For those of you who like to read novels that are a little unusual, crazy, modern, etc. this is the standard that you could use to focus on the use of language and the structure of the plot.

20 3.9 Explain how voice, persona, and the choice of a narrator affect characterization and the tone, plot, and credibility of a text. This is a good standard if your book has a strong narrator with a voice you can “hear” as you read. The standard asks you to discuss HOW the narrator affects the characters, and affects the storyline and how believable the story is.

21 3.10 Identify and describe the function of dialogue, scene designs, soliloquies, asides, and character foils in dramatic literature. This is another standard that is good for those of you who like to read plays, or who must read plays for drama class. Although it says “and” in this standard, you could probably focus your essay on just one of the techniques listed.

23 3.11 Evaluate the aesthetic qualities of style, including the impact of diction and figurative language on tone, mood, and theme, using the terminology of literary criticism. (Aesthetic approach) This standard is more appropriate for Advanced Placement English (11th grade) where students analyze the choice of words by an author, but if you feel ready to talk about a book word by word, then feel free to try it.

24 3.12 Analyze the way in which a work of literature is related to the themes and issues of its historical period. (Historical approach) This one seems to be popular for students who read books set in historical time periods, especially the Holocaust. In this type of essay, you must be familiar (and may even need to research) the history of the time period, in order to be able to compare it to the themes in the literature.

25 Writing the Response to Literature Essay

26 Writing the Essay After you pick a standard to use as your writing prompt, then you need to prepare to write the essay.

27 Pre-Write Re-read your journal entries.
See if any of them give you ideas to go with one of the standards. Notice that if you have not been quoting from the text of your novel, you may want to start doing that in the future, in order to give you some helpful material to use in your essay.

29 Example of a Thesis Standard 3.5 Compare works that express a universal theme and provide evidence to support the ideas expressed in each work. Thesis: The universal theme of a society gone wrong is clearly expressed in 1984 by George Orwell and Brave New World by Aldous Huxley, through the use by each author of strong characters and a futuristic plot.

30 Introduction Writing the introduction is simply a matter of leading your reader to your thesis. Introducing the concept, the idea, the things that writers do, etc. until you get down to specifics is one way of starting an introduction. Another way is to use a quote from the book that capture the idea or evidence that you are planning to present.

31 Example of an Introduction
Many authors like to explore the possibilities, the “what ifs” and the outcomes for the future that could happen to our planet. Some of these writers express such ideas in science fiction. But other authors have another agenda: to warn us of what might happen if we don’t watch out. By setting their books in futuristic settings and giving their characters strong voices, they are not trying to predict the future, but instead portray how horrible the future might be if we don’t watch what we are doing. The universal theme of a society gone wrong is clearly expressed in 1984 by George Orwell and Brave New World by Aldous Huxley, through the use by each author of strong characters and a futuristic plot.

32 The Body With a clear thesis, the body of your essay simply follows the blueprint set out by the thesis. Where do you think you would go with this thesis? The universal theme of a society gone wrong is clearly expressed in 1984 by George Orwell and Brave New World by Aldous Huxley, through the use by each author of strong characters and a futuristic plot.

34 Conclusion With the previous six paragraphs mapped out for you, all you need is a conclusion. A conclusion should restate the idea presented in the introduction. It should make or restate some of the most important points you made. It should not introduce any new ideas that you thought of while you were writing--if you want to include those, you should rewrite the essay to include them, or save them for another essay. 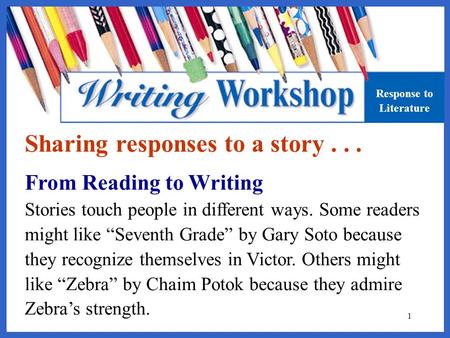 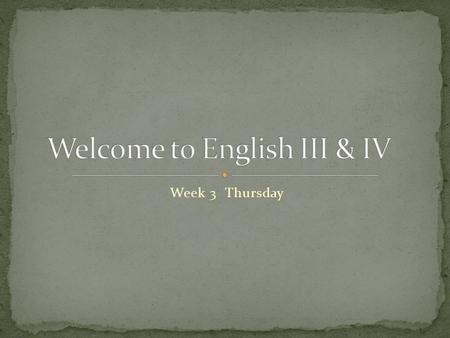 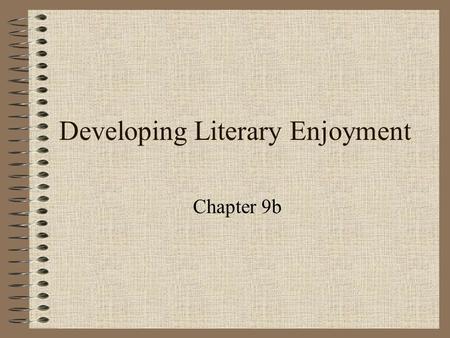 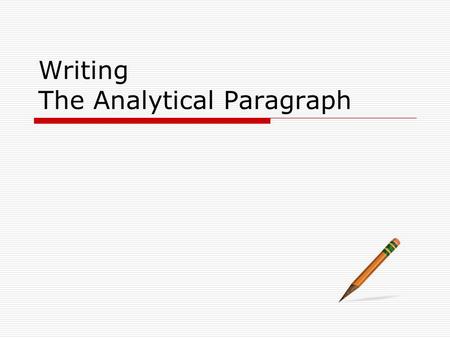 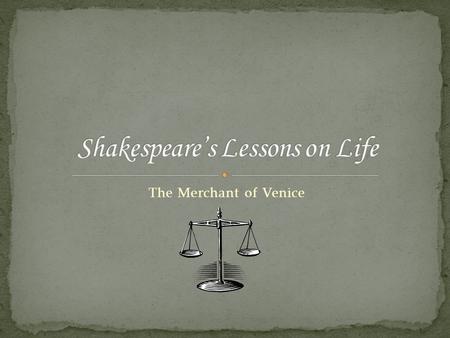 The Merchant of Venice. In this unit, students will be working around themes such as “Self Interest versus Love”, the “Divine Quality of Mercy”, and “Hatred. 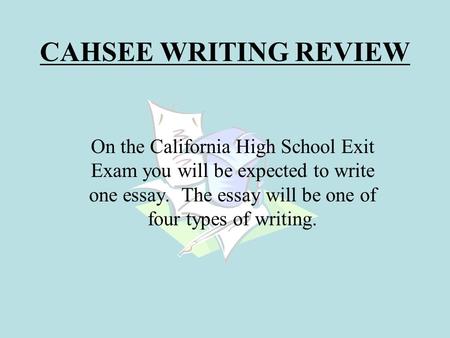 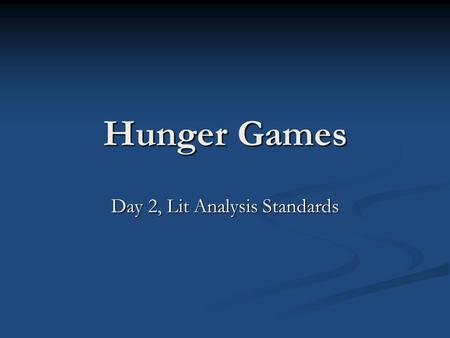 Hunger Games Day 2, Lit Analysis Standards. The following questions are based on p of The Hunger Games 1. “[Peeta’s sarcasm is] like a slap. 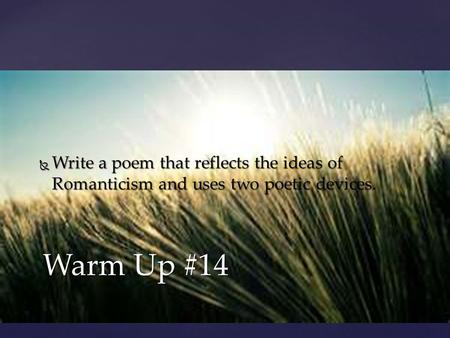 Warm Up #14  Write a poem that reflects the ideas of Romanticism and uses two poetic devices. 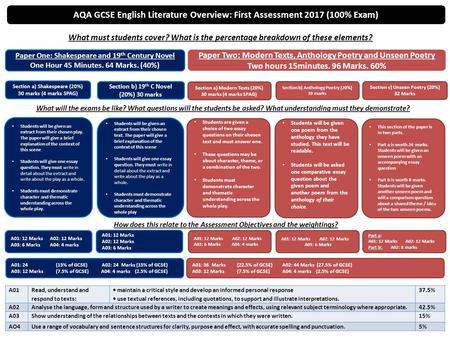 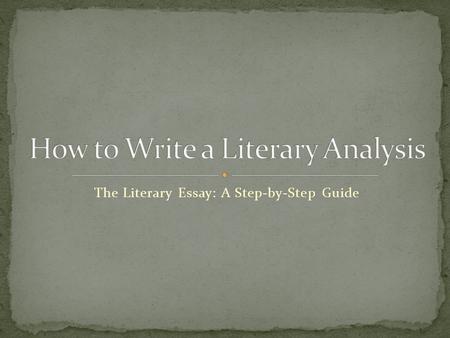 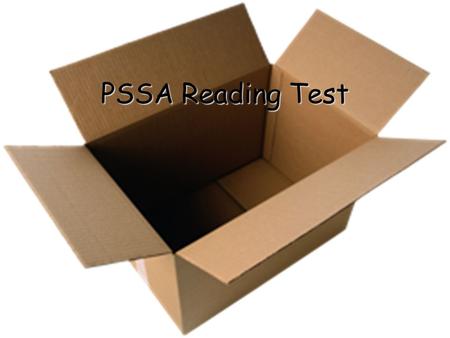 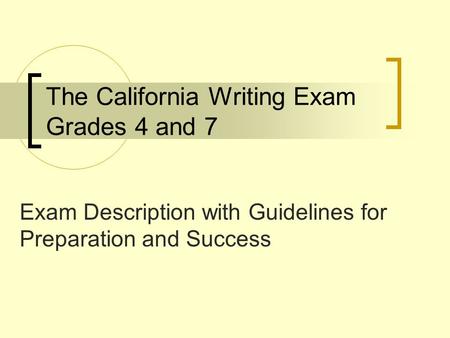 The California Writing Exam Grades 4 and 7 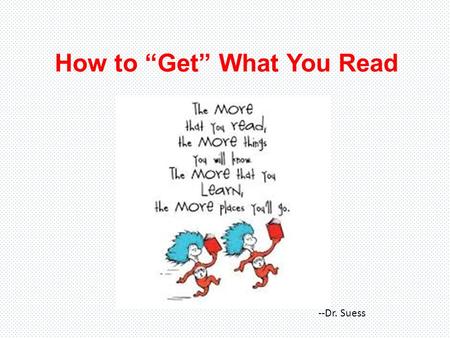 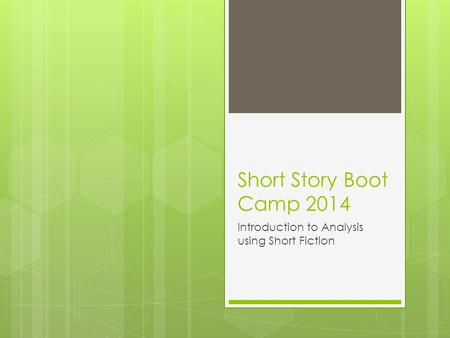