Presentation on theme: "Review: Routing algorithms Distance Vector algorithm. –What information is maintained in each router? –How to distribute the global network information?"— Presentation transcript:

3 –Congestion control mechanisms: –Open loop (proactive): prevent the congestion from happening. –Closed loop (reactive): detect the congestion and do something to fix the problem. Traffic shaping: –congestion is typically caused by bursty traffic –traffic shaping forces the traffic to be not so bursty –Leaky Bucket algorithm. »each host connected to the network has an interface containing a "leaky bucket” (a queue) »Packets can arrive at any rate »Packets are discarded when the bucket overflows. »Packets depart at a constant rate. –Example: a burst data of 200Mbps for 40 ms, using leaky bucket algorithm with a data rate of 16Mbps?

4 –Congestion control mechanisms: Traffic shaping: –The leaky bucket algorithm has a constant data rate, we want the communication to be a little bursty when the computer needs it. –Token bucket algorithm. »A packet can go if there is a token. The token is destroyed after the packet is gone. »A token is generated very T second »Tokens can be accumulated to an upper bound. »Many variations. A token bucket algorithm is typically described using three parameters: (burst size, average rate, max rate) Admission control –like the telephone system, when there is congestion, reject service to avoid making the situation worse

5 Choke packet: (used in both VC and datagram) –Each router monitors the utilization of its output lines –When the utilization is above a threshold, send chock packet to the source host –The source will then slow down sending the packets to the same destination. –The source will avoid listening to the choking packet for a while Hop by Hop chock packet –LA to NY at 155Mbps, 30 msec, 4.6Mb in the place that causes congestion, choke packets sending to the source may take too long to take effect –Instead, ask every intermediate router to slow down. »quick relief at the point of congestion »more buffer at upstream routers

6 load shedding –I am congested now, let me drop some packets to make the network easilier. –Which packet to drop? »based on service: ftp -- wine policy (older is better), real time -- milk policy (newer is better) »indicated by the source which packets that are more important. (prioritize packets)

7 –Next issue: Internetworking. many networks exist: ATM, Ethernet, DECNET... These networks have lot of differences: –services: connection-oriented and connectionless –Protocols: IP, SNA, IPX –Addressing: Flat and hierachical –Packet size: –Quality of Service: support or not –Error Handling: How to send packets from one network to another network?

8 –Two types of internetworking. Concatenated Virtual Circuits: –A connection to a remote host is set up by concatenating virtual circuits in all networks it passes by. –Gateways response for converting packet format and maintaining VC. –Work best when all network have the same properties. »all reliable, all unreliable. –Can also be done on transport layer for datagram subnets. Connectionless internetworking: –inject datagrams into subnets and hope for the best –packets may not follow the same route –also works on VC subnet.

10 –Solution 2: chop the large packet into small fragments and send fragments as individual internet packets. Problem: when to put the packet back together? –at gateways: »transparent to other networks »high overhead -- all packet must pass through the same exit gateway –at the destination: »every fragment is treated as an internet packet »smart end hosts (may not always be true) »fragments must be numbered »retransmission overhead (can be complicated).

11 –Tunneling. Internetworking for the general case is extremely difficult. Common case: source and destination are on the same type of network. Different networks in between. How it works? –Source sends packets to an intermediate gateway –Intermediate gateways put the whole packet into the payload field (don't interpret). –The destination will understand the packet. –Firewalls: –routers with packet filtering capability –forward a packet only when the packet passes its testing.

Download ppt "Review: Routing algorithms Distance Vector algorithm. –What information is maintained in each router? –How to distribute the global network information?" 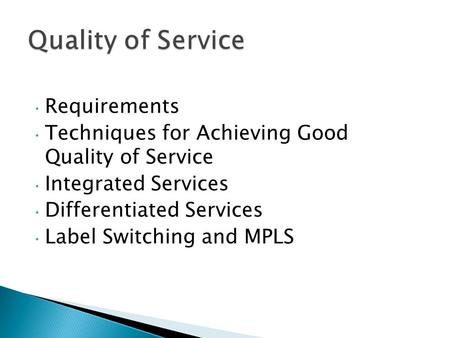 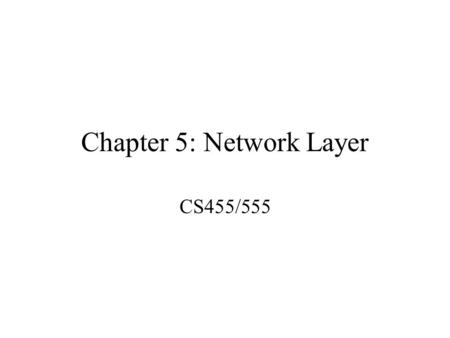 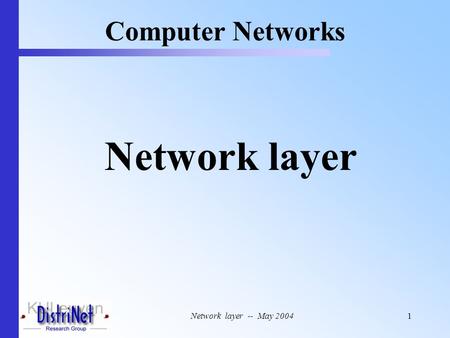 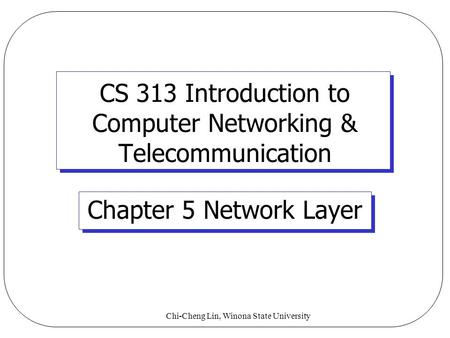 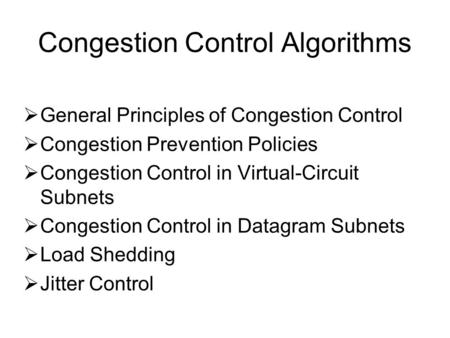 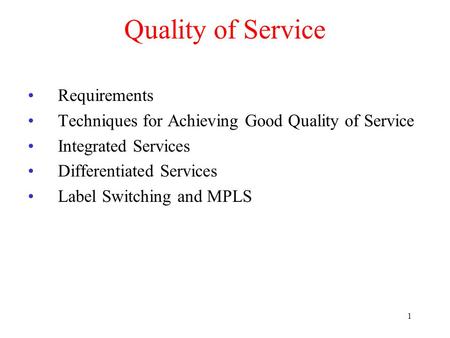 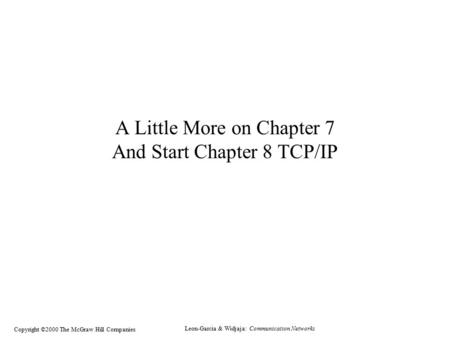 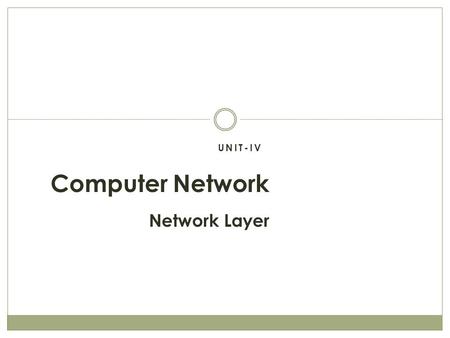 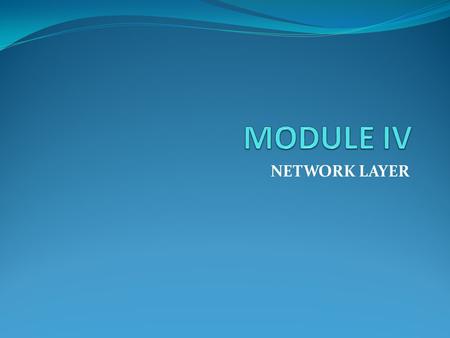 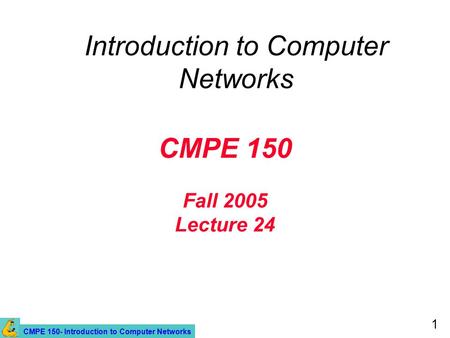 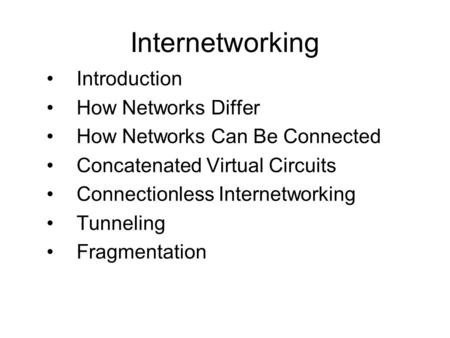 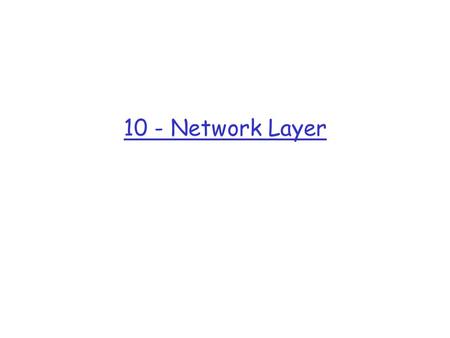 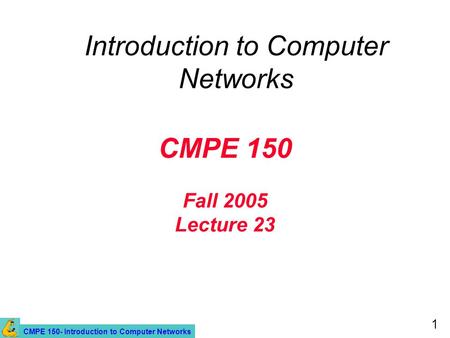