Presentation on theme: "Writers use capital letters and punctuation marks to help the reader better understand what is written."— Presentation transcript:

2 Writers use capital letters and punctuation marks to help the reader better understand what is written.

4 Use a period at the end of a sentence that makes a statement, requests something, or gives a mild command. –Travis hated the school lunch today. (statement) –Listen carefully so that you don’t make the same mistake again. (mild command)

6 A question ends with a question mark. Why are you sleeping in class, Mr. Harris? A statement expressing strong feeling or excitement ends with an exclamation point. What a beautiful day it is!

7 A comma comes between two independent clauses. Stefanie finished her book, and then she went to bed. A comma separates an interruption from the rest of the sentence. Mr. Piechalski, another English teacher, can be very loud.

8 A comma separates words, phrases, or clauses in a series. (A series contains at least 3 items. We had salad, spaghetti, and breadsticks for dinner. A comma separates items in an address or date. North Ridgeville, Ohio May 13, 1980

9 A colon shows the reader that a list or explanation follows. I will need the following items: scissors, paper, glue, and paint. A semicolon joins two or more closely related independent clauses that are not connected with a coordinating conjunction. I did not call myself a poet; I told people I wrote poems.

10 Use an apostrophe to: Show that one or more letters have been left out of a word to form a contraction. Hadn’tthey’d it’sclass of ‘99 Form the plural of a letter, a number, a sign, or a word discussed as a word by adding an s. B’s and’sdo’sdon’ts

12 Use a dash to indicate a sudden break or change in the sentence. Near the year’s end—and this is mostly due to poor planning—a lot of students realize they should do make-up work. Use a dash to set off parenthetical material – material that explains or clarifies a word or a phrase. A single incident—a tornado that came without warning—changed the face of the small town forever. Use a dash to indicate interrupted speech.- Mama, why are you--

13 Use parentheses to set off explanatory or added material that interrupts the normal sentence structure. –Bella (our dog) sits in on the piano lessons (on the piano bench), must to the teacher’s suprise and amusement. When using a full sentence within another sentence, do not capitalize it or use a period inside the parentheses. –Since your friend won’t have the assignment (he was just thinking about calling you), you’ll have to make a couple more calls to actually get it.

Download ppt "Writers use capital letters and punctuation marks to help the reader better understand what is written." 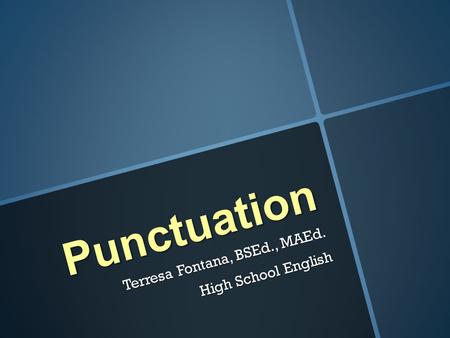 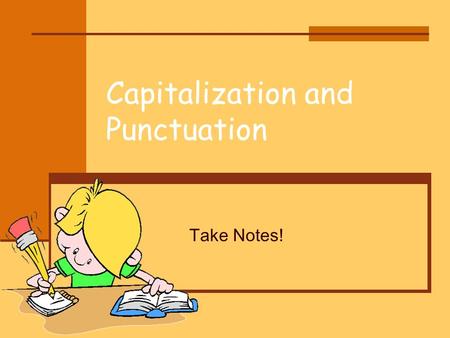