2 Chapter 4 - Reliability Measurement of human ability and knowledge is challenging because: ability is not directly observable – we infer ability from behavior all behaviors are influenced by many variables, only a few of which matter to us Whatever I say about ability here applies to knowledge as well. Ability is not directly observable we have to infer true values for things like intelligence or aptitude. There are many influences on behavior the ones we’re not interested in can obscure the ones we are interested in that makes our inferences problematic

4 Reliability – the basics
A true score on a test does not change with repeated testing A true score would be obtained if there were no error of measurement. We assume that errors are random (equally likely to increase or decrease any test result). 1. In other words, you don’t learn or acquire skill (related to the material being tested) from the test itself. That assumption is, of course, questionable – since in some courses, the testing experience teaches through integration.

5 Reliability – the basics
Because errors are random, if we test one person many times, the errors will cancel each other out (Positive errors cancel negative errors) Mean of many observed scores for one person will be the person’s true score

8 Estimating Sarah’s spelling ability…
Sarah’s observed score varies as the difficulty of the random sets of words varies But presumably her true score (her actual spelling ability) remains constant. Note: this is only true when we select the words randomly. If we deliberately choose an easy set of words & a hard set, the difference in Sarah’s scores reflects both sampling error and her ability.

9 Reliability – the basics
Other things can produce error in our measurement E.g. on the first day that we test Sarah she’s tired But on the second day, she’s rested… This would lead to different scores on the two days

10 Estimating Sarah’s spelling ability…
Conclusion: O = T + e But e1 ≠ e2 ≠ e3 … The variation in Sarah’s scores is produced by measurement error. How can we measure such effects – how can we measure reliability? O = T + e. We are assuming that over the period of testing, T remains constant. This may not be true, for example if Sarah is 8 years old, and we test her in September and the following June. But it should be true if she is 21 and we test her today and tomorrow.

12 How do we deal with sources of error?
Error due to test items Domain sampling error

15 Domain Sampling error A knowledge base or skill set containing many items is to be tested. E.g., the chemical properties of foods. We can’t test the entire set of items. So we select a sample of items. That produces domain sampling error, as in Sarah’s spelling test.

16 Domain Sampling error There is a “domain” of knowledge to be tested
A person’s score may vary depending upon what is included or excluded from the test.

17 Domain Sampling error Smaller sets of items may not test entire knowledge base. Larger sets of items should do a better job of covering the whole knowledge base. As a result, reliability of a test increases with the number of items on that test r1t = r1j reliability of a score given by square root of the correlation between the test that produced it and all other randomly parallel tests from the domain. As number of items on a test increases, it tests a more complete range of items and so should produce a result more correlated with results of other tests.

18 Domain Sampling error Parallel Forms Reliability:
choose 2 different sets of test items. these 2 sets give you “parallel forms” of the test Across all people tested, if correlation between scores on 2 parallel forms is low, then we probably have domain sampling error. E.g., 2 different random sets of 20 words to test Sarah’s spelling ability Solution when we have domain sampling error of measurement: develop new sets of items, with better method If both forms of a test are given on same day, a given person’s scores could differ because of (i) form and (ii) random error If the two forms are given on different days, time sampling is another source of error. This technique is not used much – professors don’t want the extra work making and using two forms of the same test. Students don’t want to write two forms of one test either

19 Time Sampling error Test-retest Reliability
person taking test might be having a very good or very bad day – due to fatigue, emotional state, preparedness, etc. Give same test repeatedly & check correlations among scores High correlations indicate stability – less influence of bad or good days. Test-retest correlations will decline with time, so that there is not one, but an infinite number of such correlations. Interval over which correlation was measured should always be provided in a report.

20 Time Sampling error Test-retest approach is only useful for traits – characteristics that don’t change over time Not all low test-retest correlations imply a weak test Sometimes, the characteristic being measured varies with time (as in learning)

21 Time Sampling error Interval over which correlation is measured matters E.g., for young children, use a very short period (< 1 month, in general) In general, interval should not be > 6 months Not all low test-retest correlations imply a weak test Sometimes, the characteristic being measured varies with time (as in learning) Over longer periods of time, changes in performance are likely to reflect cumulative changes (development), rather than random error, and to be seen in broad cognitive performance rather than just in narrow test performance.

23 Internal Consistency error
Suppose a test includes both items on social psychology and items requiring mental rotation of abstract visual shapes. Would you expect much correlation between scores on the two parts? No – because the two ‘skills’ are unrelated. It is quite possible to be good at social psychology and bad (or good) at mental imagery.

25 Internal Consistency error
Split-half method Kuder-Richardson formula Cronbach’s alpha All of these assess the extent to which items on a given test measure the same ability or trait.

26 Split-half Reliability
After testing, divide test items into halves A & B that are scored separately. Check for correlation of results for A with results for B. Various ways of dividing test into two – randomly, first half vs. second half, odd-even…

27 Split-half Reliability – a problem
Each half-test is smaller than the whole Smaller tests have lower reliability (domain sampling error) So, we shouldn’t use the raw split-half reliability to assess reliability for the whole test

28 Split-half reliability – a problem
We correct reliability estimate using the Spearman-Brown formula: re = 2rc 1+ rc re = estimated reliability for the test rc = computed reliability (correlation between scores on the two halves A and B)

29 Kuder-Richardson 20 Kuder & Richardson (1937): an internal-consistency measure that doesn’t require arbitrary splitting of test into 2 halves. KR-20 avoids problems associated with splitting by simultaneously considering all possible ways of splitting a test into 2 halves. Note – KR20 is for situation where test items are dichotomous (e.g., right or wrong).

30 Kuder-Richardson 20 The formula contains two basic terms:
a measure of all the variance in the whole set of test results. “Variance” is a technical term – a measure of how much, on average, the scores in the data set differ from each other.

32 Internal Consistency – Cronbach’s α
KR-20 can only be used with test items scored as 1 or 0 (e.g., right or wrong, true or false). Cronbach’s α (alpha) generalizes KR-20 to tests with multiple response categories. α is a more generally-useful measure of internal consistency than KR-20

34 Reliability in Observational Studies
Some psychologists collect data by observing behavior rather than by testing. This approach requires time sampling, leading to sampling error Further error due to: observer failures inter-observer differences

35 Reliability in Observational Studies
Deal with possibility of failure in the single-observer situation by having more than 1 observer. Deal with inter-observer differences using: Inter-rater reliability Kappa statistic

40 Standard Error of Measurement
A simple way to think of the SEM: Suppose we gave one student the same test over and over Suppose, too, that no learning took place between tests and the student did not memorize questions The standard deviation of the resulting set of test scores (for this one student) would be the standard error of measurement. Interval estimators vs. point estimators

41 What to do about low reliability
Increase the number of items To find how many you need, use Spearman-Brown formula Using more items may introduce new sources of error such as fatigue, boredom 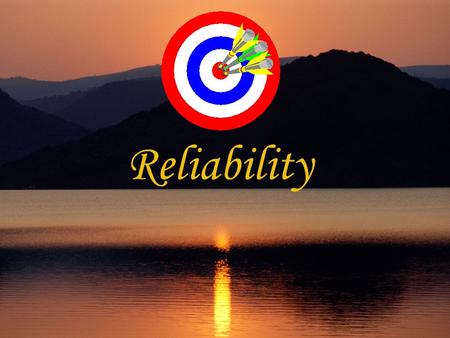 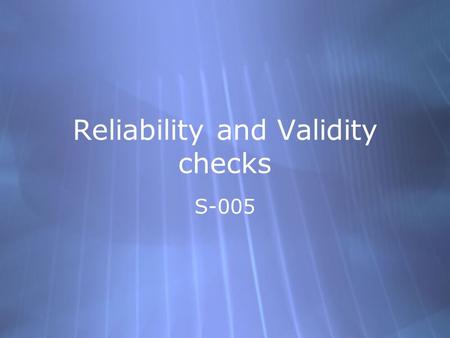 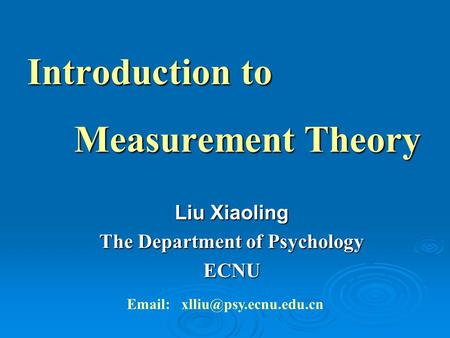 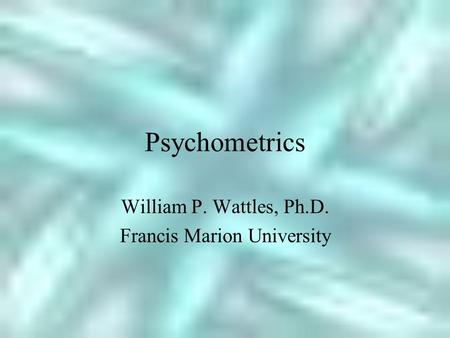 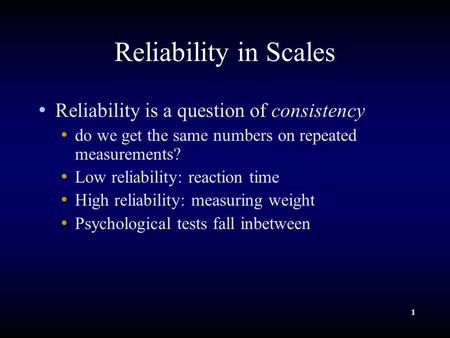 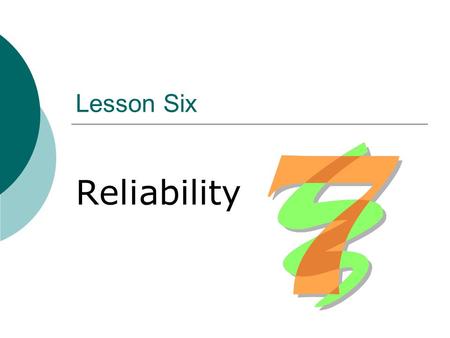