5 Definition and Role of the CSA

8 Who is a CSA? (continued) 3. People and offices designated under CI Policy. 4. Officials with significant responsibility for student and campus activities.

9 Requirements of the Annual Security Report

11 Why do we need CSA’s?  Because of the Clery Act, CI is legally required to publish an annual security report. The report must include all crimes that are reported to police agencies or to a CSA, even if there is no police investigation.

12 What it means to be a CSA  If someone tells you about a crime or an incident that might be a crime, record the information and submit a report. Simply get the facts – experts will do that analysis. To make a report, please complete the Clery Crime REPORT form and forward it to the police department. When in doubt, report it. Questions? Contact the CSU Channel Islands Clery Coordinator at 805-437-8881.

13 Examples of CSA’s  Dean of students, student housing staff, athletic coaches, student activities coordinators, student judicial officers and advisors to student organizations.  If you are directly affiliated with and responsible for students, they are likely to report an incident to you.

14 Who ISN’T a CSA?  Administrative staff not responsible for student (e.g., payroll, facilities)  Clerical staff  Individual faculty who do NOT serve as an advisor to a registered student organization.

15 Confidential Reporting Option:  A psychological counselor, when acting within the scope of his or her license or certificate, is not considered to be a CSA, and is not required to report crimes for inclusion in the Annual Security Report.  They are encouraged to inform persons being counseled on the procedures to report crimes on a voluntarily basis for inclusion in the Annual Security Report.

17 Crimes that must be reported: (continued)  Hate crimes – Specific list of crimes, motivated by bias against any person or group of persons.  Any liquor, drug or weapons violations – both arrests and disciplinary referrals for students and employees (staff & faculty).

18 Report crimes by location  A crime must be reported if it occurred… On campus (including University Glen) In on-campus Student Housing On public property adjacent to campus property (streets, sidewalks, parking lots, parks)

22 Don’t include crimes unrelated to CSU Channel Islands  For example: a student tells you about a crime that occurred at a different college before he transferred here. A student reports an assault that happened away from campus and did not involve a campus activity. (e.g. home for spring break, in an off-campus student apartment, on vacation or at an off- campus job with a private company.)

23 Do tell the student about reporting options and refer for help  For example, A student tells you she was raped by another student at an off-campus apartment.  Although the crime did not occur at a location covered by Clery reporting, the accused student may be subject to CSU Channel Islands disciplinary action for this off-campus conduct. In addition, the victim is eligible for campus assistance and resources.

24 Just get the facts  Police will categorize the report; your job is to get the information the person is willing to tell you. Remember: You are not a detective You don’t have to prove what happened or who was at fault You are not supposed to find the perpetrator  Use the report form provided by CIPD. Do not identify the victim unless he/she gives permission.

26 Completing the Clery Crime REPORT form  Report form is available at CIPD or on the CIPD website www.csuci.edu/police/Annual_Security_Report.htm  Describe the incident Completing the form as thoroughly as possible will help the police and the Jeanne Clery Coordinator determine the appropriate crime classification Get as accurate and complete description of the incident as you can Indicate the crime that seems most appropriate to you

27 Questions to ask  Is a violent crime in progress? If so, call 911 immediately  Has the victim sought or is the victim in need of assistance/services?  What happened? When, where, and how did it happen? Is there an identified suspect?  Has the incident been reported to the police or another CSA?  Does the victim wish to remain anonymous?

29 Crime Classifications (continued)  Criminal Homicide Murder and Manslaughter  The willful or negligent killing of a human being by another.  Aggravated Assault An unlawful attack upon the person of another for the purpose of inflicting severe or aggravated bodily injury.

31 Crime Classifications (continued)  Robbery The taking of personal property from the care, custody, or control of another person by means of force or fear.  Questions to ask if robbery is reported: Was force or a weapon used or threatened? Was the victim injured? Did the victim feel fearful, threatened or endangered?

32 Crime Classifications (continued)  Burglary Unlawful entry into a structure to commit a felony or theft  Questions to ask if Burglary is reported: Was the item taken from inside dorm, office, classroom, lab or other structure? Was the structure closed or locked? How did the suspect get in the structure?

33 Crime Classifications (continued)  Motor vehicle theft The taking of a motor vehicle without the consent of the owner (includes joyriding).  Arson Willful or malicious burning/attempt to burn structure, vehicle, or personal property of another.

34 Crime Classifications (continued)  Hate Crimes Any of the aforementioned crimes, plus:  Theft, simple assault, threats, vandalism, or  Any other crime involving bodily injury Crime was motivated by bias against any person or group of persons; and The victim was selected because of actual/perceived race, gender, religion, sexual orientation, ethnicity/national origin, or disability.

37 Role of the CSA Department Head

43 CSA Department Head  In January of each year, forward to the Clery Coordinator: Clery Crime TALLY SHEETS Clery Crime REPORT forms List containing the names and position titles of each subordinate CSA in place during the previous year 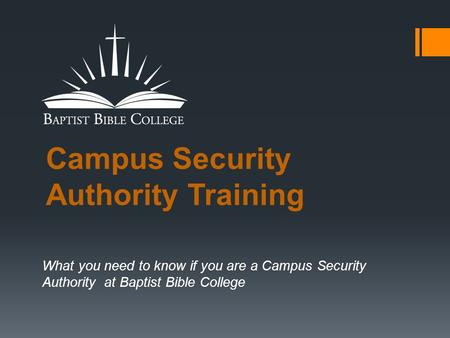 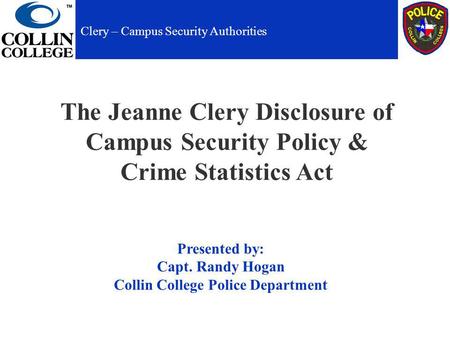 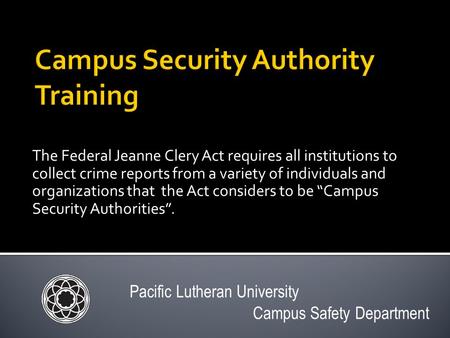 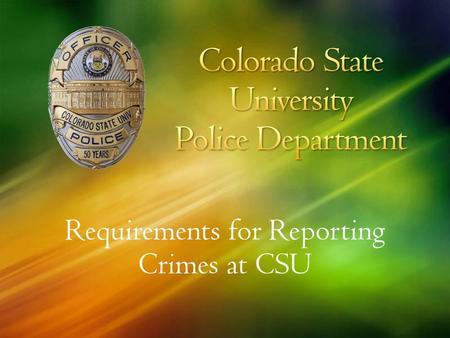 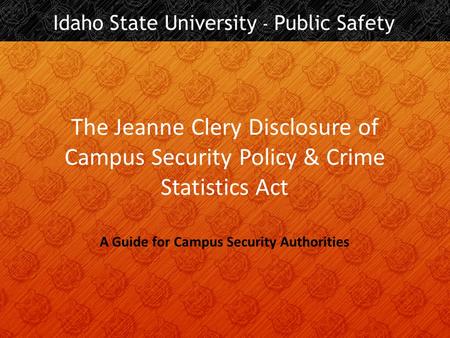 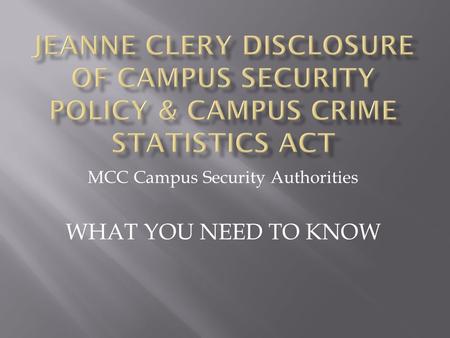 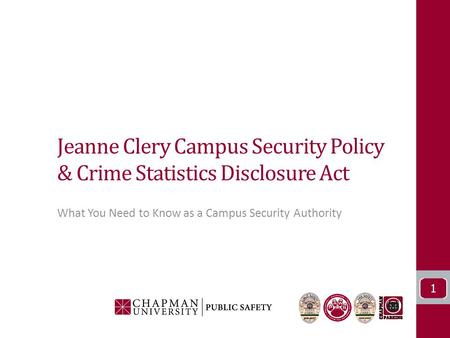 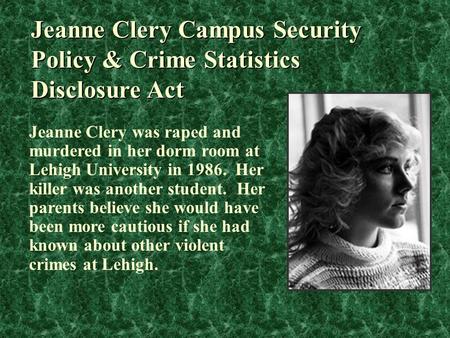 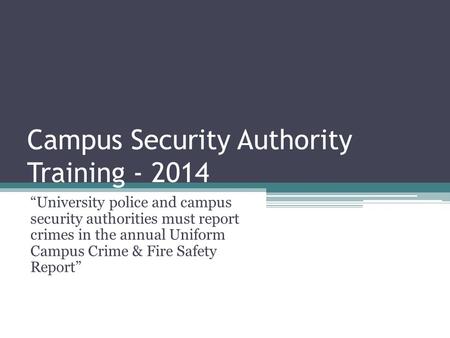 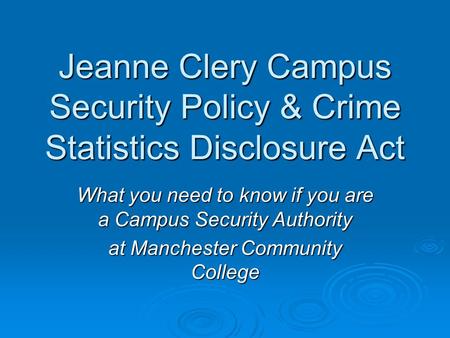 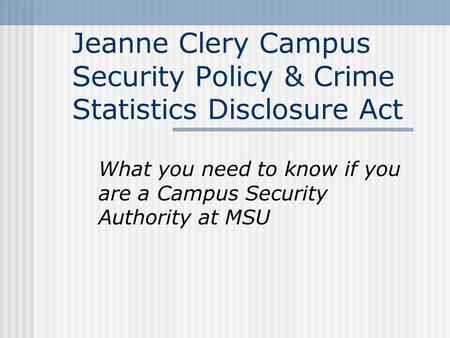 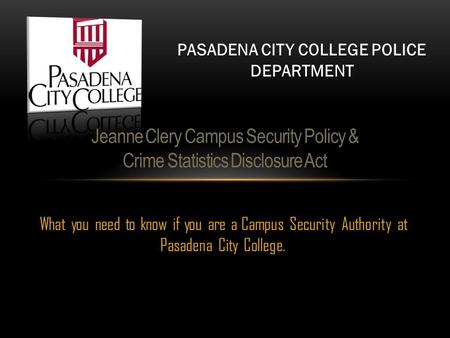 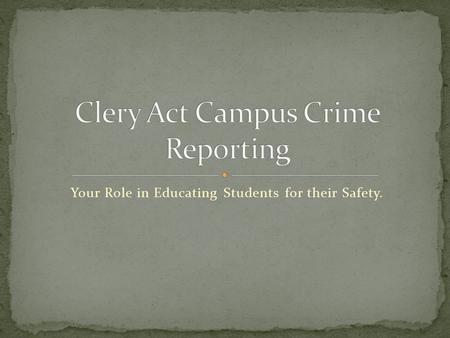 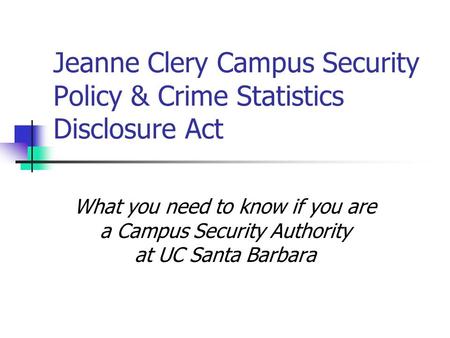 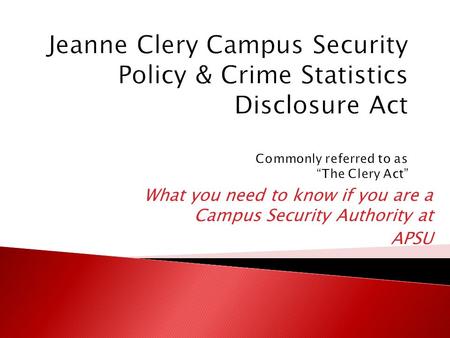 What you need to know if you are a Campus Security Authority at APSU. 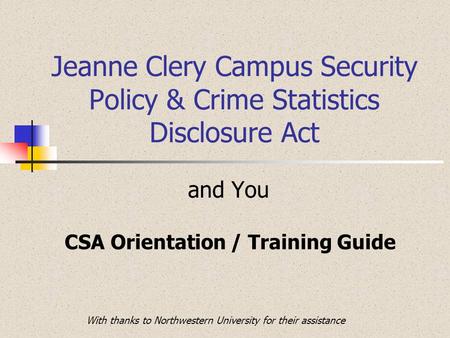 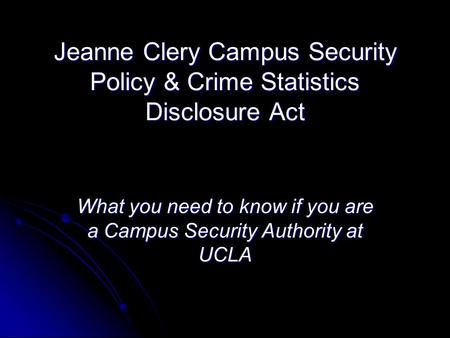 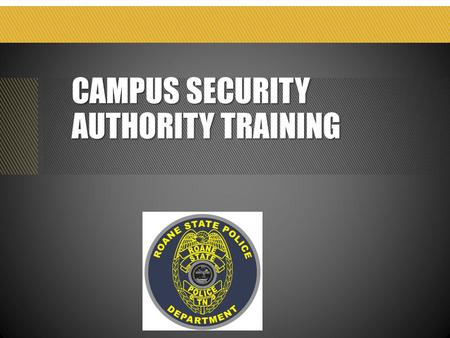 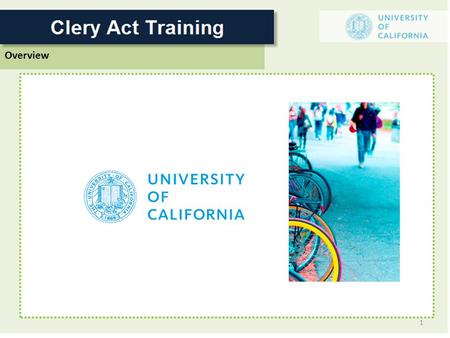 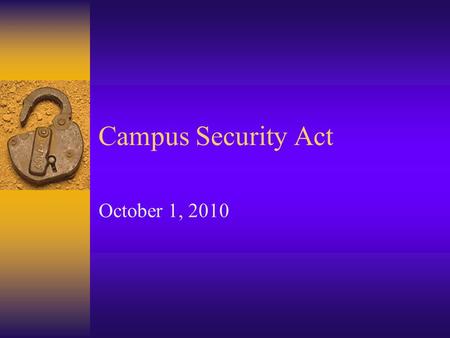