2 Section 1 The Right to Vote

3 History of Voting Extending Suffrage: The Five Stages –extend voting rights came in the early 1800s –broaden the electorate followed the Civil War –19th Amendment prohibited the denial of the right to vote because of sex –securing African Americans a role in the electoral process –26th Amendment no State can set minimum age for voting at more than 18

9 Other Qualification Cont. Tax Payment –payment of taxes used to be a common suffrage qualification Persons Denied the Vote –nearly all states have disqualified those who have been convicted of serious crimes

13 The Voting Rights Act of 1965 Made the 15th Amendment, at long last, a truly effective part of the Constitution this act applied to all elections held anywhere in this country Voting Act originally to last only five years

14 Voting Rights Act of 1965 cont. Preclearance –cases show that laws most likely run afoul of preclearance requirements are those that make changes location of polling places boundaries of election districts deadlines in the election process ward or district election to at-large elections qualifications candidates must meet in order to run for office

17 The Size of the Problem Off-year election: the congressional elections held in the even-numbered years between presidential elections Ballot Fatigue 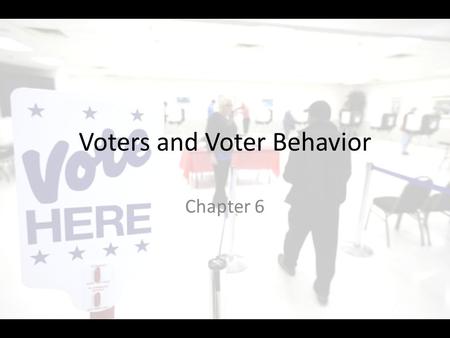 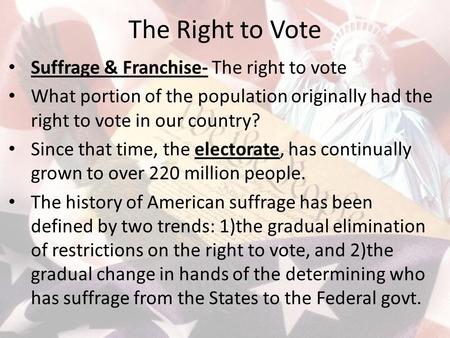