2 Review In Africa Hannibal met his match in a general named ______?
What increased the size of Rome and increased the power of the Senate? What happened to the people Rome conquered? What natural barrier protects Italy in the North? Who prompted the engraving of the Roman laws on the Twelve Tables?

3 A Weakening Republic Two brothers Tiberius and Gaius Gracchus (known as The Gracchi) saw the need for reform in the Roman Empire. Tiberius’ suggestions for reform made him popular with the common people but not with the Senate. Senators and their supporters clubbed Tiberius and hundreds of his followers to death. They also had Gaius killed as well. From this point on violence replaced respect for the law as the primary tool of politics in Rome.

5 The Social War During this time Rome’s relationship with its allies all over Italy entered a crisis. Citizens of the Italian cities who served in the Punic Wars with Rome wanted the right to hold public offices in the Roman government. The Senate resisted their demands Finally the {Roman allies rebelled and fought the Social War to have the right to participate in government.}

6 Social War Continued… The war that followed was one of the bloodiest in Roman history. Seeing as how the allies were all trained by the Roman army itself. Rome ultimately won the war but… The Senate did agree to grant the allies political participation & citizenship This made the Roman state grow to include the entire peninsula

7 Caesar in Power Julius Caesar, a general and a powerful public speaker, had a lot of pull with Rome’s poor In 60 B.C. Caesar joined with Gnaeus Pompey and Licinius Crassus forming the political alliance The First Triumvirate With their support Caesar became consul in 59 B.C. During the next 10 years he brought all of Gaul under Roman rule

9 Continued… Crassus died in battle leaving Pompey sole consul.
Jealous of Caesar’s fame he ordered Caesar home without his army Caesar refused and instead marched an army toward Rome. With this act he declared war on the republic. He defeated Pompey in Greece and Pompey fled to Egypt Caesar chased Pompey into Egypt where the King of Egypt presented Caesar with the head of Pompey 2 years later {Caesar was named dictator for life by the Senate}

10 Caesar in Egypt Egypt was considered off limits to the Romans who feared the wealth and possible corruption from dealing with Egypt Caesar becomes romantically involved with Cleopatra and helps her overthrow her brother and waste time traveling up and down the Nile Cleopatra eventually becomes pregnant with Julius Caesars only child She is hated in Rome and eventually her son is denied the right to be the heir to Rome.

15 The Second Triumvirate
Caesar chose his grandnephew Octavian as his heir. He was 19 when Caesar was murdered. Marc Antony, a general and ally of Caesar drove out the conspirators and took control of Rome Octavian and Antony along with Lepidus, Caesars second-in-command formed the Second Triumvirate Antony led an army east to conquer Syria and Asia Minor from the armies of Brutus and Cassius. Then he joined his “ally” Cleopatra in Egypt Meanwhile Octavian forced Lepidus to retire and he built his own power in Italy

17 Octavian: The First Augustus
In time Octavian persuaded the Senate to declare war on Antony and Cleopatra. Octavian captured Alexandria within an year. Antony and Cleopatra seeing they had no chance of escape killed themselves Octavian determined not to meet Caesars fate, did not present himself as a king or emperor. The Senate gave him the title Augustus. He has been known ever since as Augustus Caesar or just Augustus

18 Cleopatra VII, daughter of Ptolemy XII, born in 69 B. C
Cleopatra VII, daughter of Ptolemy XII, born in 69 B.C., became joint-ruler of Egypt with Ptolemy XÎII. Expelled in 48 B.C., by Ptolemy's party, she was reinstated by Julius Caesar. In the summer of 47, she bore a son whom she called Ptolemy Caesar, asserting that Caesar was his father. In 46, on his invitation, she came to Rome with her son and husband, returning to Egypt after his murder. Her image has been distorted by Roman propaganda. She was not Egyptian but Macedonian. She probably did not betray Antony at Actium whose suicide she had to follow suit to avoid figuring in Octavian's triumph. She chose death by the asp because it was a royal symbol. She was well-educated, and able to speak several languages

19 Continued……. Beginning with the reign of Augustus the Roman Republic became the Roman Empire Under his rule the Empire stretched from Spain to Syria and from Egypt to the Rhine. Augustus tried to go further north but the German tribes defeated them. Rome accepted the Rhine as the northern boundary of the Empire {In Augustus’ reign a period called the Pax Romana, a period of peace that lasted 200 years} came to be

21 The Pax Romana Emperors
After Augustus’ death, for the next 54 years {relatives of Julius Caesar, called the Julio-Claudian Emperors,} ruled the empire {The Pax Romana kept Rome stable but reduced the power of the government} After the Julio-Claudian emperors Rome experienced Army Emperors (4 in one year) and the Flavin Emperors (for 30 years) Then came a series of rulers known as the {Five Good Emperors Hadrian and Marcus Aurelius were among this notable group}

22 Continued….. Hadrian spent a lot of time trying to protect the boundaries of the Empire by building “walls” on the frontier borders Marcus Aurelius preferred studying philosophy rather than fighting wars. But he did have to defend the empire against invaders from the north and the east. These invaders would play a key role in the future of Rome. 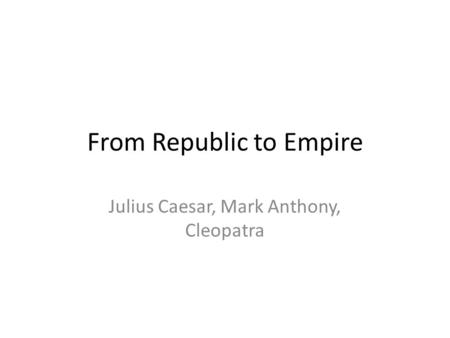