3 Protagonist A protagonist is considered to be the main character or lead figure in a novel, play, story, or poem.  It may also be referred to as the "hero" of a work. The action usually revolves around the protagonist.

4 Antagonist The character in a work of literature who opposes the main character.

6 Conflict A struggle between opposing forces; conflicts can be external (outside forces) or internal (within a characters mind).

9 Setting The time and the place of the story or novel.
A story can be set in a realistic or imaginary place and can occur in the past, present,or future.

10 Point of View The perspective from which the story is told.
First Person- ‘I’: The narrator of the story is a character in the story that is telling the story from his own personal view. The story is told from the point of view of ‘I.’ Second Person: When the author speaks directly to the reader. Third Person Limited- ‘He, she it”: Told like a reporter reporting the news or by an outsider who can see into the mind of one of the characters. This point of view can also be told by an outsider who can see into the minds of many characters (all knowing).

11 Plot What happens 1st, 2nd, 3rd, and so on.
The plot centers on at least one major problem called a conflict.

13 Exposition The opening of a short story or novel. It provides background information that the reader needs to know. It introduces the characters, describes the setting, and may recap important events before the action of the story.

15 Climax The highest point of interest
Where most action takes place in the store Involves an important event,decision, or discovery that affects the final outcome.

16 Falling Action Following the climax, the intensity of the story may subside. The falling action describes the results of the major events as the action winds down. Falling action

17 Resolution The final part of the story.
It tells how the story ends. All the loose ends are tied up.

20 Tone The approach or attitude that the writer takes toward the subject of the writing. Serene Hostile Playful Angry Serious Tender Amusing Informative Outraged Argumentative

22 Irony Irony is the contrast between what is expected to happen and what actually happens.

23 Imagery Imagery can be created by details in the story that appeal to the senses of sight, sound, touch, smell, and taste. Sweet, slow drops of rich orange juice drip from the corners of my mouth and drool off my chin.

24 Suspense Suspense is created through the reader’s uncertainty about the character’s ability to solve a problem, conflict, or crisis.

26 Examples of Figurative Language
Simile: Compares two unlike things using like or as: My heart soared like an eagle. Metaphor: Am implied comparison between two relatively unlike things without using like or as: The jealous girls were a bunch of tigers ready to pounce. Hyperbole: The comparison by using an exaggerated statement: I’m so tired, I could sleep a hundred years! Personification: Compares by giving human characteristics to non-human things: The river reached for me with icy fingers.

27 Flashback A device that allows the writer to present events that happened before the time of the current narration or the current events in the fiction. Flashback techniques include memories, dreams, stories of the past told by characters, or even authorial sovereignty. Flashback is useful for exposition, to fill in the reader about a character or place, or about the background to a conflict.

28 Foreshadowing An author’s way of hinting or giving clues to the reader of events or developments that might come ater in the story. 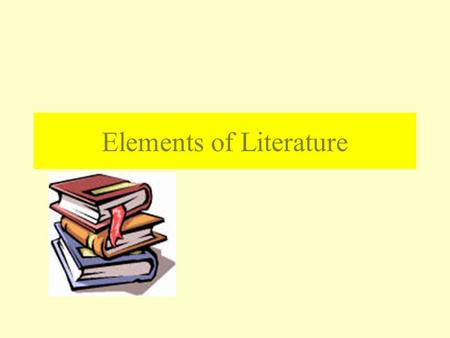