Presentation on theme: "#2011Census Census 2011 – Outputs & Analysis 18 th July 2013 Manchester What we have published, what we & others have planned and where can you find it."— Presentation transcript:

3 #2011Census Realising the benefits The census is a rich and unique data set Census data are used to allocate funds Local authorities use local data on populations so local plans better reflect future local needs and development happens in the right places Census underpins consumer market research for the design of surveys Census data help retail businesses tailor their stores so that they better match the interests of local people Census data can shed light on policy or social issues – family types, carers, areas of deprivation, environmental pressures etc …and we aim to ensure that the opportunities that the census release presents are maximised

4 #2011Census And finally… Benefit realisation quantification In liaison with users, catalogue the uses of the results, prepare case studies and, where possible, aim to place an economic value on the range of uses of data

8 #2011Census WHAT WE HAVE AVAILABLE: OUTPUTS

11 #2011Census Releases to date Numerous releases since July 2012 Statistical Bulletins Analysis to supplement the outputs Interactive content Univariate data for all topics Age and sex, and occupied household estimates Information about second addresses by age, sex and type Key Statistics and Quick Statistics Data available down to Output Area level Around 300 people in an average OA Range of other geographies

29 WHAT WE HAVE DONE: ANALYSIS

31 #2011Census Why produce analysis? To fully exploit the use of the Census data/outputs Helping users to understand and interpret Census outputs Adding value to Census outputs by incorporating them in topic reports, adding insight to policy and other users Comparisons over the decade Census recognised as source of information on ethnicity, identity, language, citizenship, nationality and religion - reflect the work in developing Census questions on these topics More robust survey outputs

34 #2011Census How the analysis is being disseminated Want to promote analysis and stimulate further analysis easier access for users accessing analysis of Census data/outputs widening the availability and use of analysis, potentially increasing the number of users internal and external analysis tool to help coordinate analysis across internal & external areas Provide guidance to users on analysis work associated with the census A forum to encourage discussion with users and producers of analysis

36 #2011Census Examples of the analysis in the stories

54 #2011Census Web Data Access: Project aims 2. Tools to discover and explore data on the ONS website 3. Enabling others to re-use ONS data more easily 1. An ONS platform for Open Data A solution that in time will be available for all ONS datasets

64 #2011Census 64 Information to support understanding, available with the data

69 #2011Census Application Programming Interface (API) If you want to create your own applications you will be able to call the data programmatically We also plan to provide some tools to help you do some basic stuff.. like an Area Profile Generator

73 #2011Census How to link in analysis Contact the census analysis team census.analysis.inbox@ons.gsi.gov.uk User/discussion forums StatUserNet – opportunity to ask questions & to share ideas Analysis will be considered by the ONS Link to the website Short synopsis of the piece of analytical work

74 #2011Census Analysis linked to date Series of briefings from ESRC Centre on Dynamics of Ethnicity: What makes ethnic group populations grow? Who feels British? Relationship between ethnicity, religion & national identity in England Has neighbourhood segregation decreased? How can we count immigration and integration? Does Britain have plural cities? More segregation or more mixing? How has ethnic diversity grown 1991-2001-2011?

77 #2011Census Group Discussion What ANALYSIS do you want to see produced from the ONS? Any analysis missing from the plans presented? What should be prioritised? How will this be used? What are you plans for analysing Census? What are the key topics? Could/should this be linked from the census analysis landing page?

79 #2011Census Summary of the day Aims: Recap on what ONS has published so far Gain an insight into how census is used Share our thinking for our future plans and gain your input into this - particularly on plans for analysis Gain an understanding of how others are planning to analyse census data Information on how to access the data through ONS 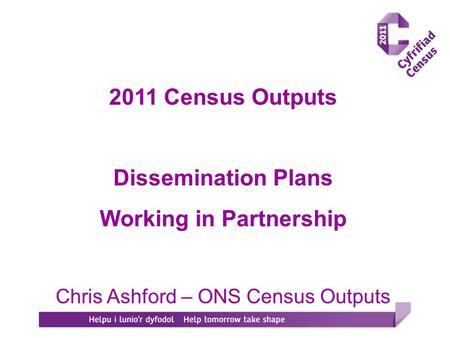 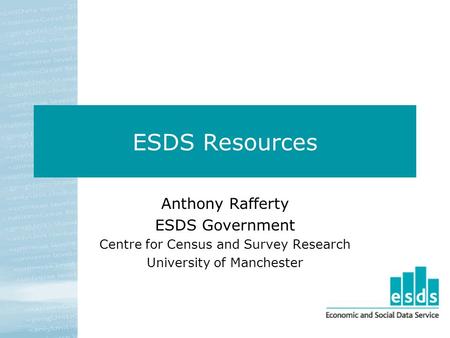 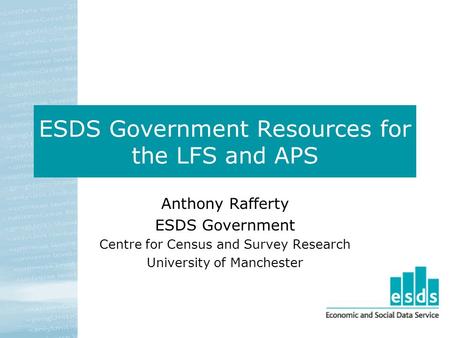 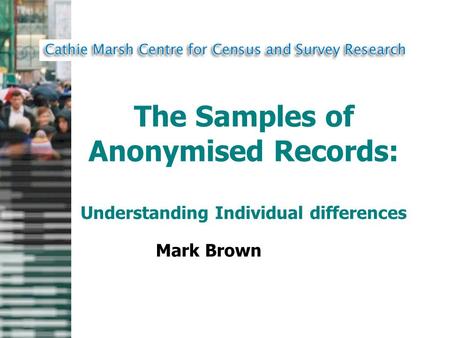 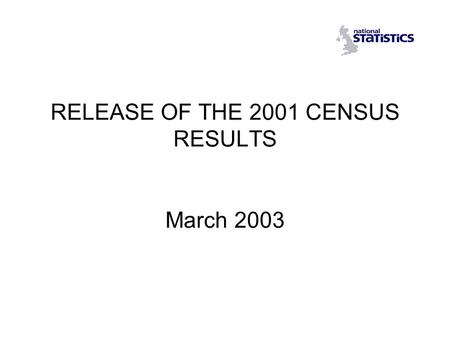 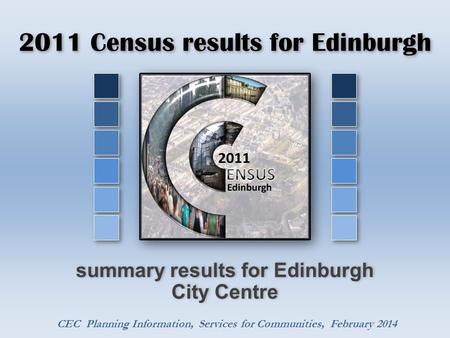 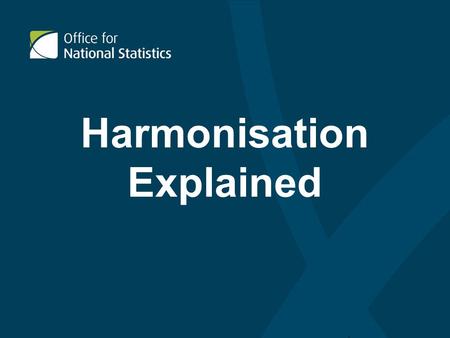 Harmonisation Explained. Introduction The Next few slides will explain; What is harmonisation? Who are the Harmonisation Team? Why Harmonise? Governance. 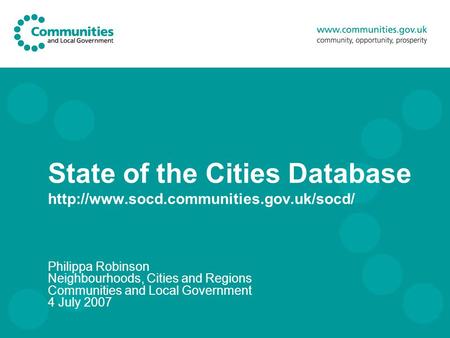 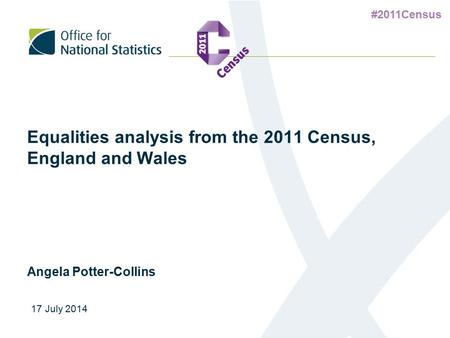 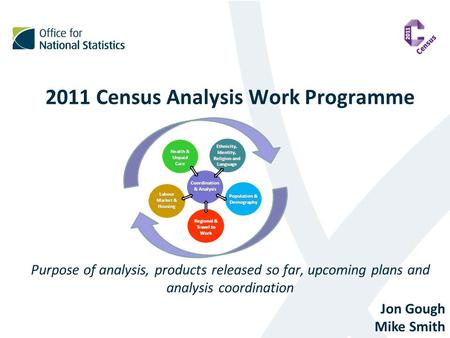 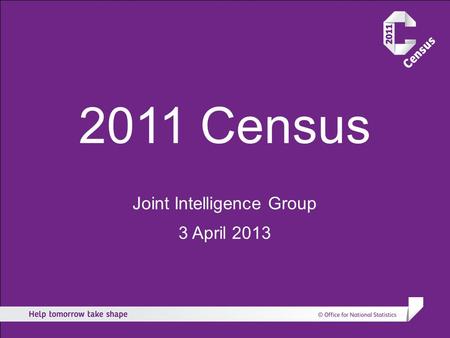 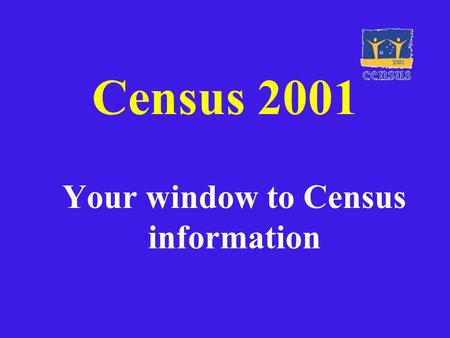 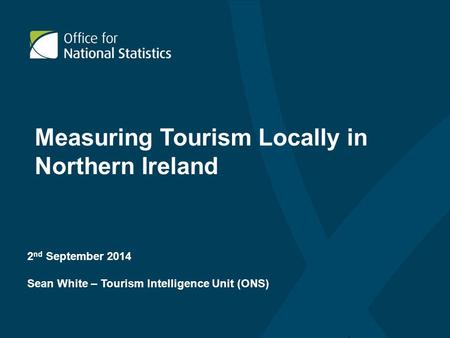 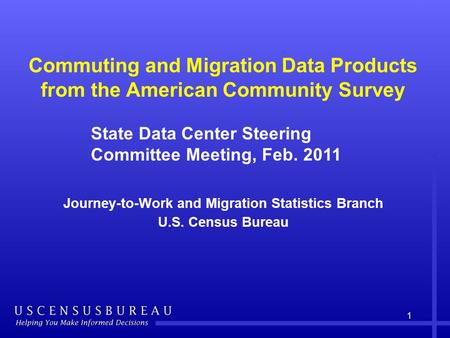 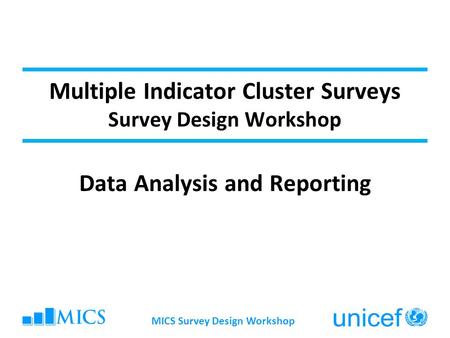