2 General Format MLA style specifies guidelines for formatting manuscripts and using the English language in writing. MLA style also provides writers with a system for referencing their sources through parenthetical citation in their essays and Works Cited pages.

3 Guidelines Double-space the text of your paper, and use a legible font like Times New Roman or Arial. Set the margins of your document to 1 inch on all sides. Indent the first line of a paragraph one half-inch (five spaces or press tab once) from the left margin. Create a header that gives your last name and numbers all pages consecutively in the upper right-hand corner, one-half inch from the top and flush with the right margin.

4 Formatting the First Page In the upper left-hand corner of the first page, list your name, your instructor's name, the course, and the date. Again, be sure to use double-spaced text. Quadruple space before and after the title, and centre it. Don't underline your title or put it in quotation marks; write the title in Title Case, not in all capital letters.

5 Example First Page Your last name and page number (this is done on each page) Your Name EAL 4U Miss S. Brosseau October 10th, 2007 Quadruple space before and after the title Top, bottom, left and right margins are all set at 1 inch (2.5 cm) Indent all paragraphs

6 In-Text Citations In MLA style, referring to the works of others in your text is done by using what's known as parenthetical citation. Immediately following a quotation from a source or a paraphrase of a source's ideas, you place the author's name followed by a space and the relevant page number(s). Example: Human beings have been described as "symbol-using animals" (Burke 3).

7 In-Text Citations (2) When a source has no known author, use a shortened title of the work instead of an author name. Try to include a page number if possible. Example: The action and the will to dance can be “participatory, social or performed” (“Dance”: Wikipedia 1). Futhermore, dance is....

8 In-Text Citations (3) Your in-text citation will correspond with an entry in your Works Cited page, which, for the Burke citation above, will look something like this: Burke, Kenneth. Language as Symbolic Action: Essays on Life, Literature, and Method. Berkeley: U of California P, 1966.

9 Formatting Quotations To indicate short quotations (fewer than four typed lines) in your text, enclose the quotation within double quotation marks. Provide the author and specific page citation (in the case of verse, provide line numbers) in the text, and include a complete reference on the Works Cited page.

12 Formatting Quotations (4) Place quotations longer than four typed lines in a free- standing block of text, and omit quotation marks. Start the quotation on a new line, with the entire quote indented one inch from the left margin; maintain double- spacing.

13 Formatting Quotations (5)_ Here is an example of a long quotation: Nelly Dean treats Heathcliff poorly and dehumanizes him throughout her narration: They entirely refused to have it in bed with them, or even in their room, and I had no more sense, so, I put it on the landing of the stairs, hoping it would be gone on the morrow. By chance, or else attracted by hearing his voice, it crept to Mr. Earnshaw's door, and there he found it on quitting his chamber. Inquiries were made as to how it got there; I was obliged to confess, and in recompense for my cowardice and inhumanity was sent out of the house. (Bronte 78)

14 Works Cited Page Begin your Works Cited page on a separate page at the end of your research paper. It should have the same one-inch margins and last name, page number header as the rest of your paper. Label the page Works Cited and center the words Works Cited at the top of the page. The Works Cited page is much like a bibliography. Organize all the works used in alphabetical order and follow the MLA Citation Style Guide provided in class for your entries. 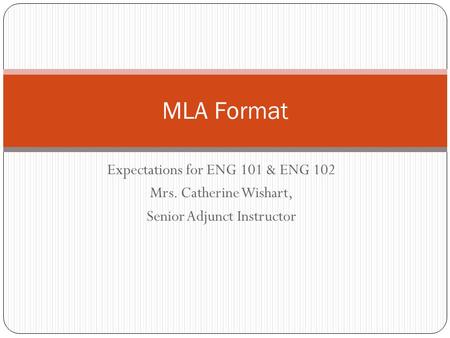 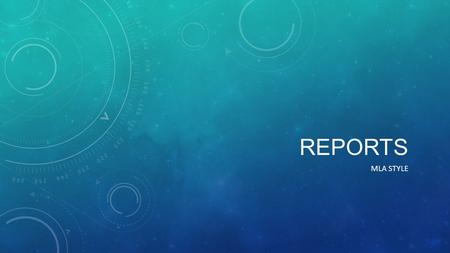 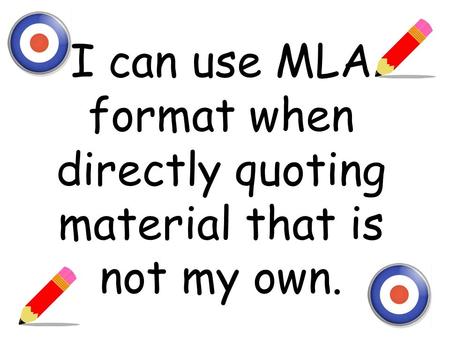 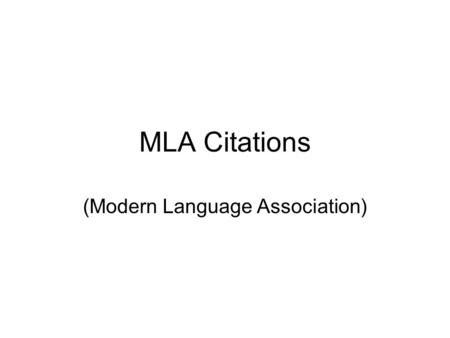