2 In economics the idea of what constitutes money is something we want to be careful about. The basic definition of money is that it is anything that is generally accepted in payment for goods and services or in the repayment of debt. Let’s note that money is NOT income or wealth. The tricky thing here is that income and wealth are often mentioned in dollar terms and our money is the dollar, but they are not the same thing. Income is a flow concept, meaning we have to consider the movement of time to measure the concept. Income is earnings per unit of time. Money is a stock and measured at a point in time. Wealth is also a stock concept and the wealth of a person can include money, but is more general than just money. Land and assets like a house are also wealth. For now we consider money to be the coin and paper we have – called currency – and our checking account balances.

3 In various place at various times shells, cigarettes, rocks, gold or other items have been called and used as money. From an economic point of view the thing that is called money has three basic functions: medium of exchange, unit of account and a store of value. Money as a medium of exchange An economy without money is called a barter system and in order to have trade there has to be a double coincidence of wants. This means a seller has to find a buyer who wants what the seller is selling and also has in trade what the seller wants (the double coincidence!) As we saw before, the time spent trying to exchange goods or services is part of transaction costs. Barter can have high cost in this regard and thus money reduces transaction costs by eliminating the double coincidence for a pair of single coincidence of wants. So, money as a medium of exchange frees up time and allows us to be more productive. For a commodity to function as a medium of exchange it must have the following characteristics: 1) be easily standardized, 2) be widely accepted, 3) be divisible (to make change easily), 4) be easy to carry, 5) must not deteriorate quickly.

4 Money as a unit of account
Just as we use pounds as a unit of weight or feet as a unit of distance, the money in an economy is used as a measure of value and this is what is meant by the phrase unit of account. If we look again at a barter economy we can see how transitioning to using money makes the economy run more smoothly. Say in a very basic economy we have only three goods. Call the goods A, B, and C. With barter we need to know how much A trades for B, how much A trades for C and how much B trades for C. So, with barter and three goods we need three statements of value. But, some folks have shown that in general if there are N goods, in a barter world there need to be N(N – 1)/2 statements of value between all the goods. So, if N = 10 then 10(9)/2 = 45 statements of value are needed. In an economy that uses money with N goods only N statements of value are needed and the statements are just the money prices of the goods. If N = 10 you need 10 prices to state value of all the goods. So, using money reduces the number of prices we need to have in an economy. Again transaction costs are reduced by using money!

5 Money as a store of value
In general a store of value means that an asset does not have to be used right now. But, if not used now there could be some loss of value. Example: If I buy a Big Mac today I could put it in the freezer and use it later. But, the value probably falls in just a few hours. If I put 5 $20 bills in the freezer I can use them later. The main worries in this case are that prices will rise and the bills will buy less stuff (inflation), and I could be earning something with the bills in other places. So, money is a store of value, but also not the only store of value and maybe not even the best store of value. But, money is the most liquid asset in existence. Liquidity is the relative ease and speed in which an asset can be converted into the medium of exchange. Money is the most liquid because it is the medium of exchange! If you want to buy a Big Mac you need money. Because people get hungry they usually want to have some money around.

6 Let’s note that hyperinflation is defined as really high inflation (the author says inflation in excess of 50% per month) and during times of hyperinflation money as a store of value is almost useless. Please do a google search on hyperinflation and see if this phenomenon occurs today – PLEASE! A payments system is the method of conducting transactions in an economy. Money is certainly part of the system. The author wants to spend a little time considering payments systems in history. Commodity money, money made up of precious metals or some other valuable commodity, was used in ancient times. Using gold coins or other commodities did make trade happen better over barter, but this form of payment had the problem of being difficult to transport. Fiat money, paper currency decreed by governments as legal tender and eventually not convertible into coins or precious metal, has the advantage of being easy to transport in modest amounts. But, counterfeiting and theft become a problem.

7 Checking accounts allow the holder of the account to write a check and the checks we use from the account are really an instruction to transfer funds from one account to another. This is nice because for bigger purchases we need not carry large amounts of currency. Some problems of using checks are i) if someone gives you a check and they are from far away, it could take time before your bank actually recognizes the value in your account, ii) the cost of check processing is relatively large. Banks are easing the processing burden by allowing electronic payment (essentially electronic checks being used). Plus you save on postage! The latest innovation includes things like debit cards and smart cards. You may even use these, right? These cards are based to some account to which you have access. So, we have said money is that which is generally accepted as payment for goods and services and for our debts. We use money because we have confidence others will accept it from us. Next we turn to how money is officially defined by the Federal Reserve.

8 The Monetary Aggregates
M1 = currency (paper and coin in the hands of the nonbank public, so cash inside ATM and bank vaults and cash drawers are not money until you and me take funds out of our accounts) + Traveler’s checks (not issued by banks) + demand deposits (checking accounts that do not pay interest and bank issued traveler’s check) + other checkable deposits (including interest bearing checking accounts). M1 is the narrowest definition of money because it includes only the most liquid assets around (this means converted to cash with ease and speed). In fact they all can be used to make payment – they are the medium of exchange! M2 = M1 + small-denominated time deposits + Savings deposits and money market deposit accounts + money market mutual fund shares. M2 includes items that can be converted to M1 items fairly easily and with very little cost. So, M2 includes money and near money items.

9 We should note that historically the growth rates of M1 and M2 do not always follow the same pattern. This is important for reasons we will study later. Basically there is some idea that controlling the money supply can have an impact on other economic outcomes. But if we want that control (if we can have it at all) we need to have the correct notion of money. This is not an easy thing to pin down! By the way the growth in any variable is (later value – value a year earlier)/value a year earlier and then take this result and multiply by As an example say you have a stock that starts out being worth $50 and then a year later is worth $57. The growth rate in the value of the stock is (57 – 50)/50 = 7/50 = .14 and then times 100 for 14 or 14% growth rate! 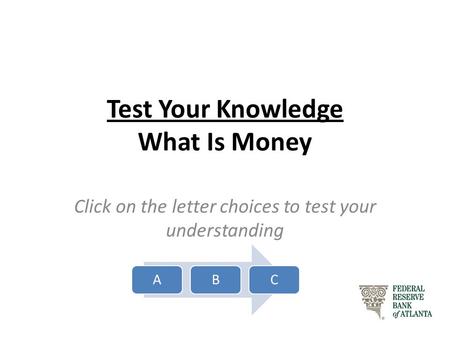 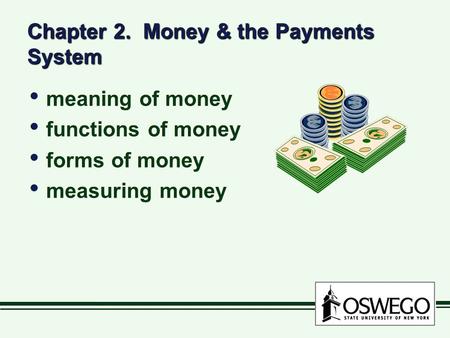 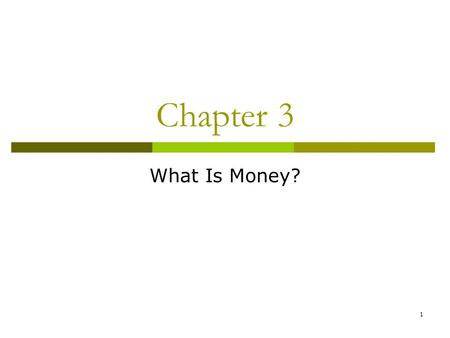 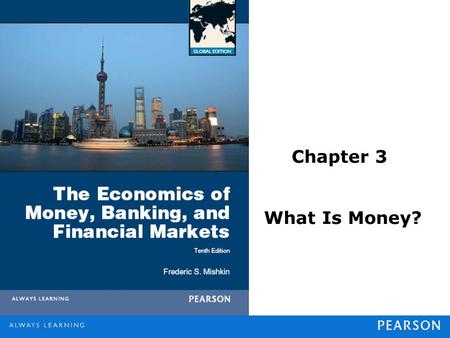 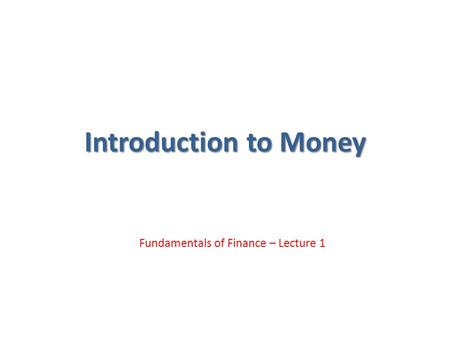 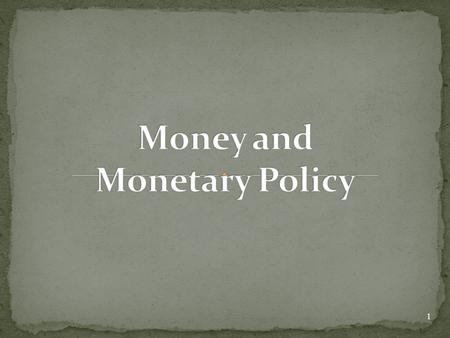 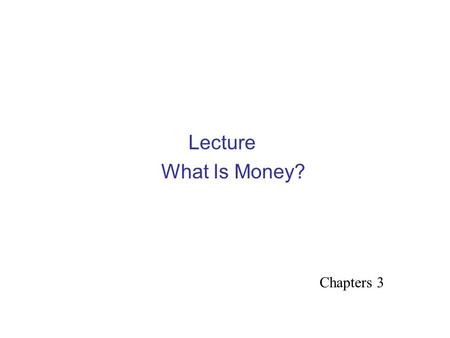 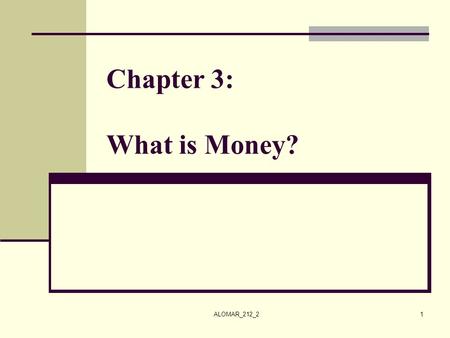 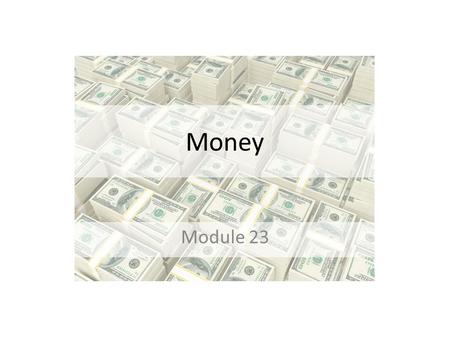 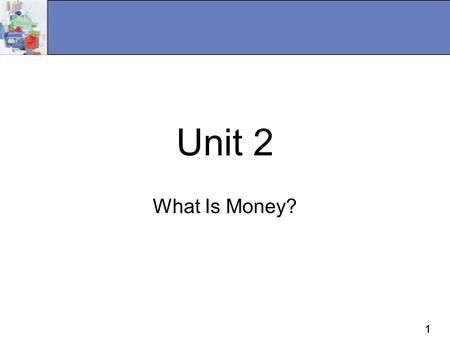 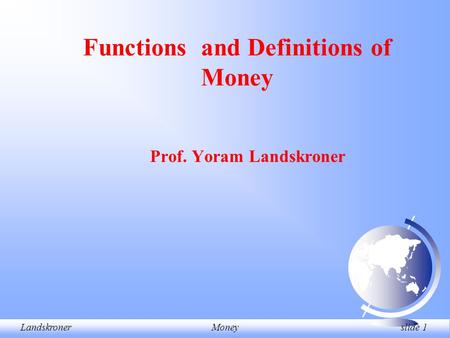 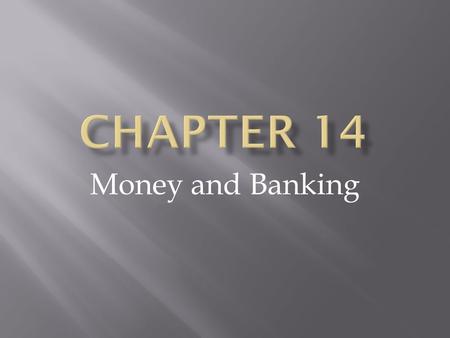 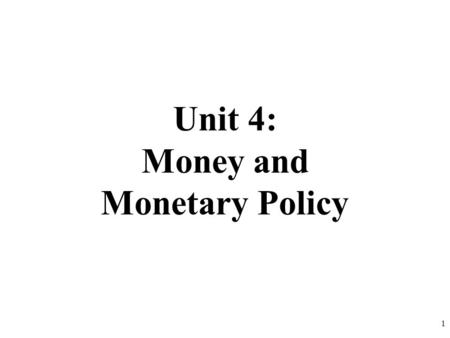 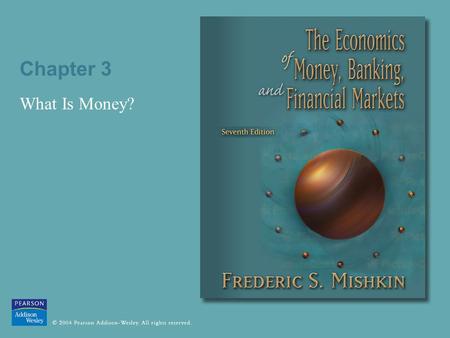 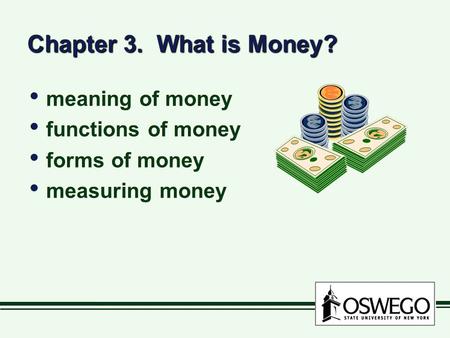 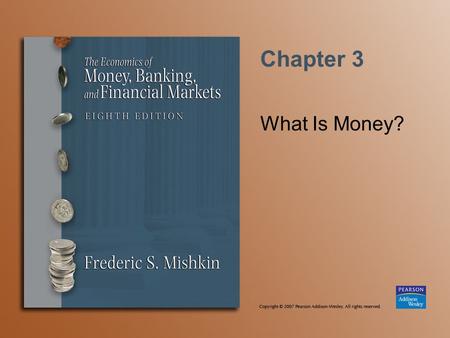 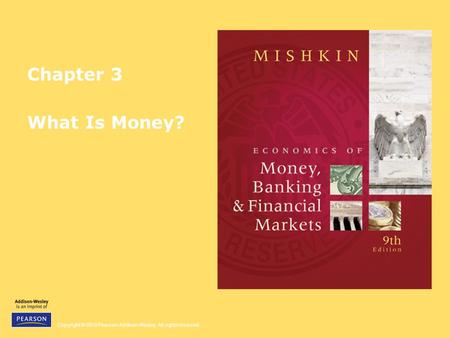 Copyright © 2010 Pearson Addison-Wesley. All rights reserved. Chapter 3 What Is Money? 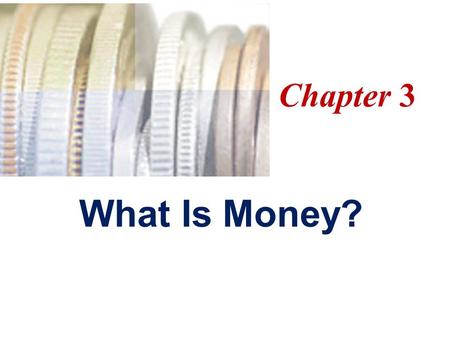