4 WMO OMM Review of actions/recommendations (1/2) Action 36.24: WMO to convene a contingency planning workshop [..] in order to investigate critical missions and associated potential contingency actions regarding the new missions implied by the Vision for the GOS in 2025. See WMO-WP-13 : workshop planned in January 2011. Close action New Action: WMO to report on the outcome of the Workshop on Continuity and Architecture Requirements for Climate Monitoring, at CGMS-39

5 WMO OMM Review of actions/recommendations (2) GOES-10 replacement for South America, and extension of IODC Addressed and fully satisfied Radio-Occultation follow-on In progress Address continuity of climate monitoring missions Mapping of Gap Analysis with respect to the ECVs Action WG III.7: CGMS Members to review the Draft Mapping of the gap analysis with the GCOS ECVs, and provide comments to WMO (Dr Bizzarro Bizzarri, bibizzar@tin.it) to be considered for a revised version to be submitted to the “Workshop on Continuity and Architecture Requirements for Climate Monitoring” on 13-14 January 2011. (Deadline: 15 December 2010.)

10 WMO OMM Continuity/optimization of SSO constellation - Particular attention needed on implementation of plans in PM orbit - Need to ensure data availability and exchange - ITWG recommendation to optimize orbital planes /coverage - EUMETSAT/ECMWF study demonstrating benefit of 3 distributed orbital planes for NWP (am, pm, em) Recommendation: CGMS Satellite Operators implementing new systems should provide the user community, as early as possible, with full technical details needed by users to get prepared to access and use these systems. Recommendation: Orbital planes of operational sun-synchronous satellites with sounding capability (IR and MW) should be coordinated with a view to optimize the temporal distribution in order to maximize coverage.

13 WMO OMM Updating the baseline … Implementation of the WMO Vision for 2025 calls for a number of enhancements and additions to current baseline CGMS should not wait until 2025 to start incorporating these changes into a new baseline Many of these changes are already or will be implemented by 2015 Especially when taking into account some «sustained programmes » of some R&D agencies members of CGMS  An intermediate step (e.g. 2015) could help to « capitalize » efforts already made towards the 2025 vision, strengthen the status of these new missions, and highlight the remaining gaps

16 WMO OMM Draft elements for baseline update (3/3) The following missions shall be performed on an operational basis by Low Earth Orbit satellites on appropriate orbits: r)Ocean surface topography by radar altimetry (Reference mission on high- precision, inclined orbit, and 2 instruments on sun-synchronous orbit am and pm) s)Radio-Occultation sounding (constellation of sensors on appropriate orbits) t)Narrow-band high-spectral resolution and hyperspectral Vis/NIR imagers (at least one sun-synchronous, am spacecraft) for ocean colour, vegetation, aerosol monitoring u)High-resolution multi-spectral Vis/IR imagers (constellation of sun-synchronous satellites, preferably in am) v)Infrared imagery for high-accuracy SST (one am spacecraft) All passive instruments should be inter-calibrated on a routine basis against reference instruments or calibration sites.

17 WMO OMM Actions for revising the CGMS baseline (1/2) Recommendation: The WG recommended to proceed with an update of the CGMS baseline for GEO, LEO and HEO satelllites in advance of CBS-XV in 2012, describing the target configuration for 2015. Action WG III.3: WMO with the support of the relevant Expert Teams, to prepare an update of the baseline for the space- based component of the Global Observing System along the lines of Annex 3 to the report of CGMS-38 WG III, and circulate to CGMS Members in advance of CGMS-39. Action WG III.4: WMO in collaboration with the atmospheric composition community and satellite experts to further refine the requirements for atmospheric composition observations and the optimal way to address these in the revised baseline.

18 WMO OMM Actions for revising the CGMS baseline (2/2) Action WG III.5: CGMS Satellite Operators to confirm their commitments to contribute to the updated baseline for the space-based component of the Global Observing System (Due date: CGMS-39). Action WG III.6: WMO to take into account the revised CGMS baseline for the space-based component of the GOS in the updating process of relevant WMO Manuals and Guides, with a view of its endorsement by CBS-XV in 2012. Recommendation: CGMS to keep under review the baseline for GEO, LEO and HEO satellites for 2015 with the aim to ensure, by 2025, a full implementation of the WMO Vision for the GOS in 2025.

19 WMO OMM Thank you for your attention 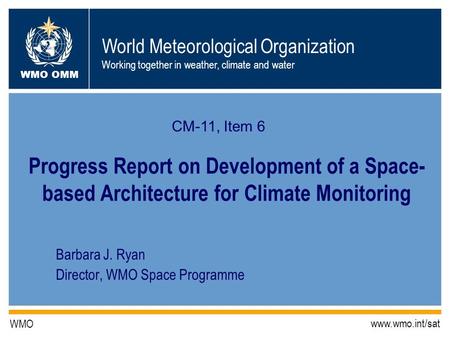 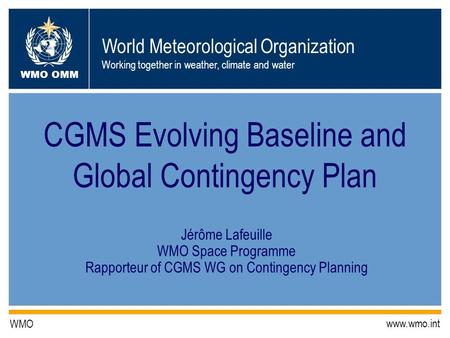 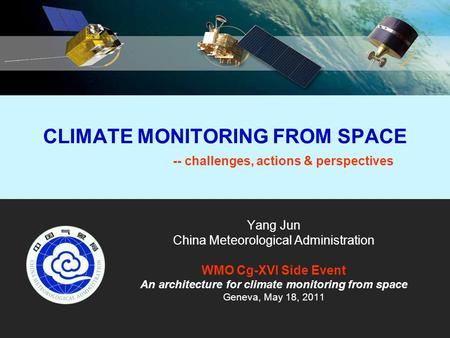 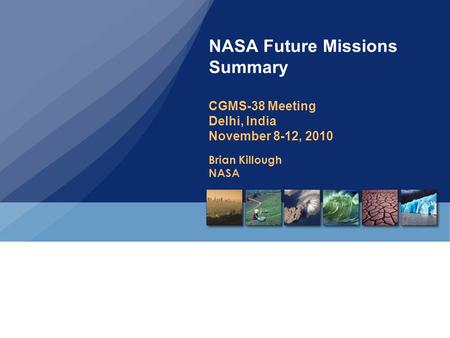 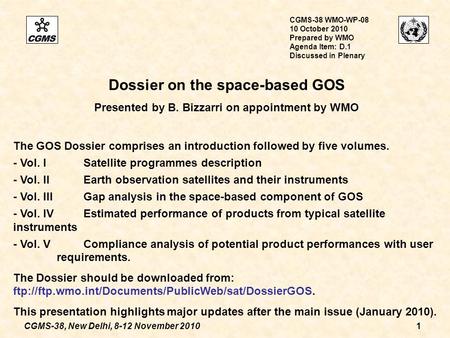 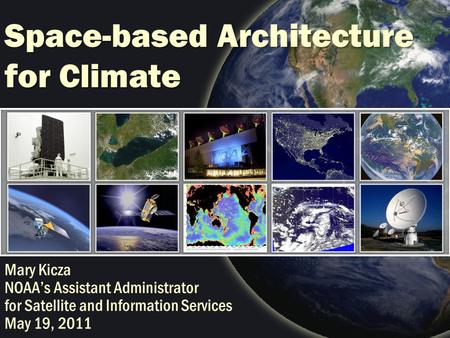 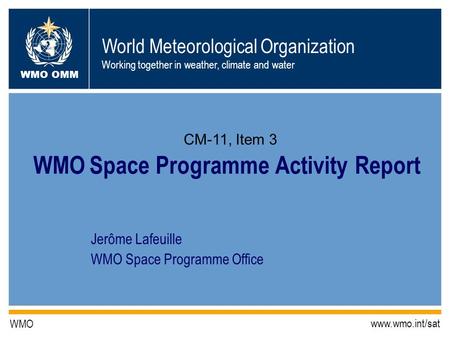 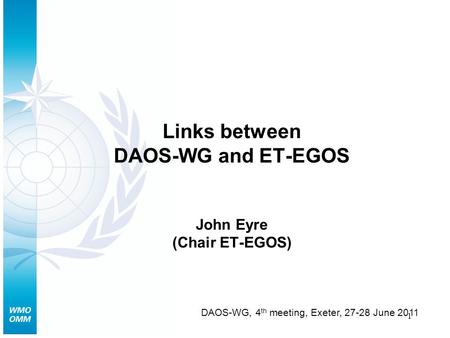 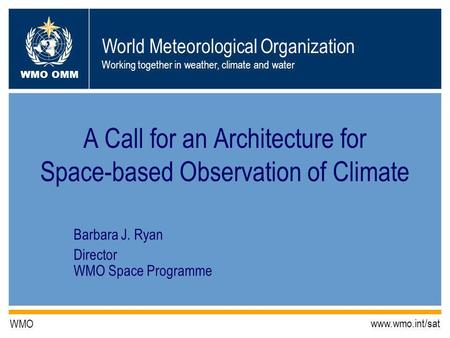 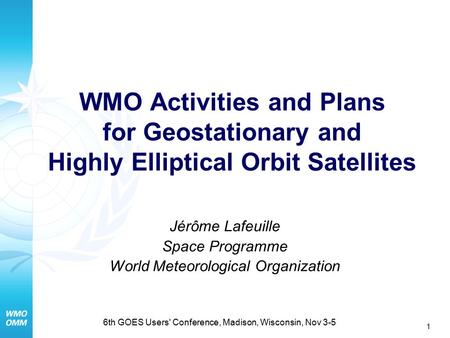 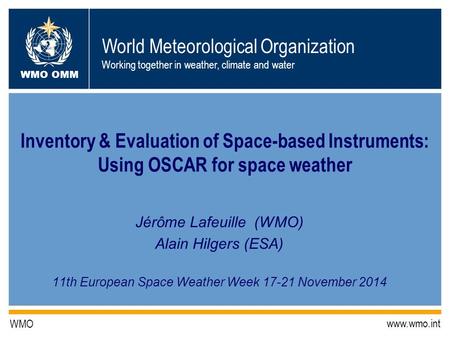 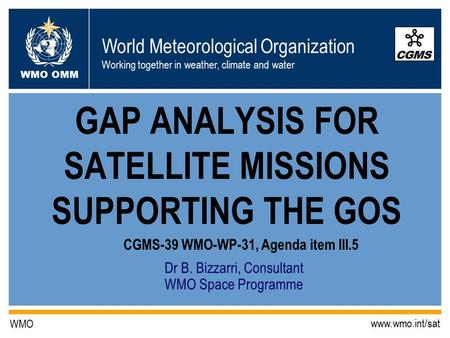 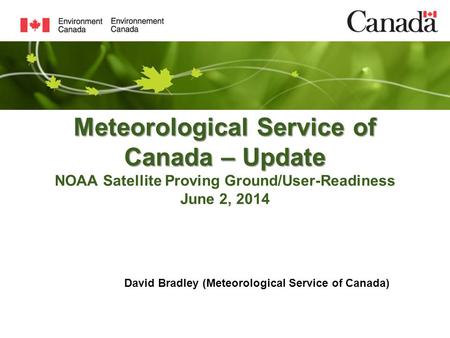 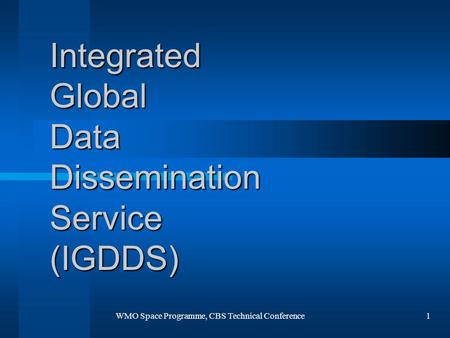 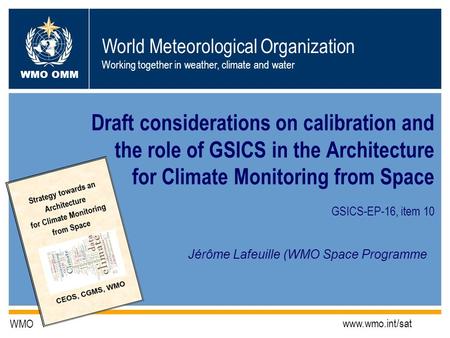