3 Settlement in Jamestown
In 1605, a company of English Merchants asked King James I for the right to establish a colony King James I granted company’s request in 1606 to settle in a region called Virginia Founding a New Colony Investors in the new settlement formed a joint-stock company called the London Company Investors shared the costs and the risks 105 colonists sent by the London Company arrived in America in April of 1607 On May 14, the colonists founded Jamestown, the first permanent English settlement in North America

5 Settlement in Jamestown
War in Virginia John Rolfe married Pocahontas Marriage helped form more peaceful relations with the Powhatan Pocahontas died in England 1622: colonists killed a Powhatan leader In retaliation, the Powhatan attacked the Virginia colonists Fighting between colonists and Native Americans would continue for the next 20 years The London Company could not protect its colonists and as a result, the English Crown cancelled the company’s charter in 1624 Virginia became a royal colony under the authority of a governor chosen by the king

6 Daily Life in Virginia In early Virginia, people lived on scattered farms Plantations, large farms, were established by tobacco farmers Tobacco was extremely valuable Headright System Started by the London Company, under this system colonists who paid their own way to Virginia received 50 acres of land An additional 50 acres of land was granted for each additional person brought from England Rich colonists brought servants and relatives in order to gain large amount of land

7 Daily Life in Virginia Labor in Virginia Expansion of Slavery
High death rates led to labor shortages **Recall that we saw this same phenomena occur in Europe during the Black Death The majority of workers were indentured servants Signed a contract to work for 4-7 years for those who paid for their journey to America Expansion of Slavery Not all laborers that came to America were Europeans Africans Some were servants, others had been enslaved Some African servants became successful farmers after their contracts ended After time, the demand for workers became greater than the supply of indentured servants Cost of slaves fell Led to the expansion of slavery By the mid 1600’s, most Africans living in Virginia were being kept in life-long slavery

8 Daily Life in Virginia Bacon’s Rebellion
As plantations grew in the Southern Colonies, the English crown began to ask for more taxes Poor colonists objected to the raise in taxes because they were not wealthy plantation owners They were also upset about the crown’s policies towards Native Americans and felt that the colony was not well protected Nathaniel Bacon led a group of former indentured servants in an attack against a group of friendly Native Americans Protested the governor’s openness to trade with them and felt that the colonists should be able to take land away from the Native Americans When the governor tried to stop him, Nathaniel Bacon led his followers into Jamestown and burned it to the ground At one point, Nathaniel Bacon controlled much of the colony, but after his death the rebellion ended

10 Other Southern Colonies
Maryland George Calvert, the first Lord Baltimore, asked King Charles I in the 1620’s for permission to begin a new colony in America for Catholics King Charles I issued a charter to George’s son, Cecilius, who took over planning the colony Cecilius became the second Lord Baltimore and named the colony Maryland in honor of England’s queen, Henrietta Maria Located north of Virginia in the Chesapeake Bay area Intended to be a refuge for English Catholics and a proprietary colony Colonial Owners controlled the government

11 Other Southern Colonies
Maryland (continued) The 200 English Catholics who first came to Maryland benefited from the lessons of Jamestown Raised corn, cattle, and hogs Soon began growing tobacco for profit Protestants began moving to Maryland in the 1640’s This led to religion conflicts Toleration Act of 1649 Presented to the colonial assembly in 1649, this bill made it a crime to restrict the religious rights of Christians Did not stop all religious conflicts, but showed that the government wanted to offer some religious freedom and protect the rights of minority groups

14 Economies of the Southern Colonies
The economies of the Southern colonies depended on agriculture Exported materials for ship building, such as wood and tar Many small farms and some large plantations Farms did well in the south because of the warm climate Many farms grew a cash crop, such as tobacco, for profit Required a great deal of work and a huge workforce Turn to slavery 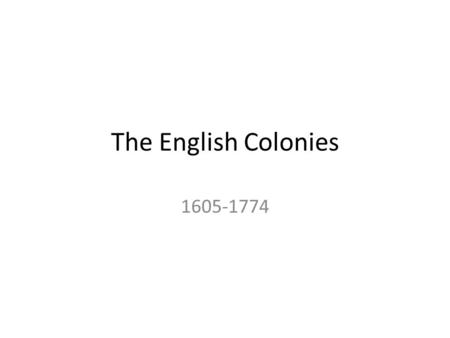 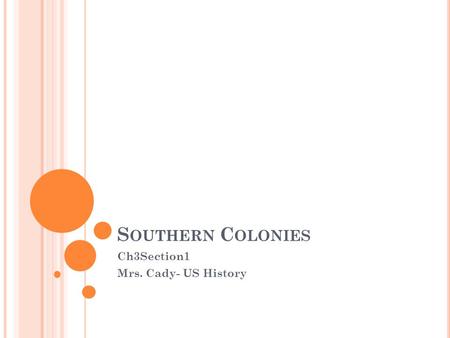 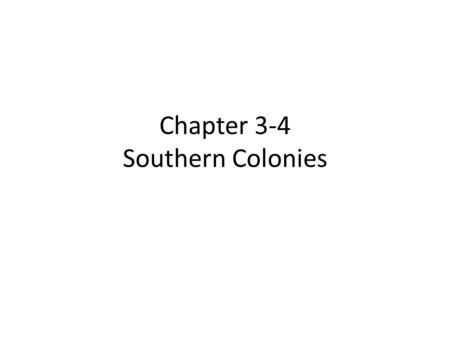