Presentation on theme: "Planets of the Solar System The Moon and Other Bodies"— Presentation transcript:

1 Planets of the Solar System The Moon and Other Bodies

2 Formation of the Solar System
The Solar Nebular Theory Describes the origin of our solar system The Big Bang describes the origin of the universe After the Big Bang, clouds of gas and dust formed nebulas Nebulas are the beginning of all new stars. Gravity caused the gas and dust to begin to condense, collide, and heat up When the temperature gets hot enough, nuclear fusion begins; the sun was born ~5 billion years ago

3 The Inner Planets (4) - The terrestrial planets
Mercury: Smallest planet, no satellites Venus: Venus rotates on its axis opposite all the other planets. This is known as retrograde rotation. Venus is very hot due to runaway greenhouse effect.

4 The Inner Planets Earth: Mars:
The only planet with liquid water and life Mars: One Day = One Earth day – Even though Mars is smaller than Earth, one rotation is equal on both planets The largest volcano in the solar system is on Mars. The name of the volcano is Olympus Mons

5 The Outer Planets (the gas giants)
Jupiter: The largest planet, biggest diameter, and its mass is twice all the other planets combined; diameter is 11 times Earth’s diameter “Giant Red Spot” is the most unique feature of Jupiter’s surface; massive storm similar to a hurricane Saturn: Complex ring system, least dense planet

6 The Outer Planets (continued)
Uranus: Green color caused by methane in the atmosphere Planet is tilted 90˚ Neptune: Farthest planet from the sun Bluish-green color with white “clouds” of frozen methane Pluto: No longer considered a planet Discovered by accident in 1930

7 The Earth-Moon System Lunar Rotation
The moon’s revolution around Earth (29.5 days) and its rotation on its axis (29.5 days) are equal. The part of the moon illuminated by sunlight that we can see from Earth changes as the moon orbits Earth causing phases of the moon.

8 Phases of the Moon

9 Eclipses eclipse an event in which the shadow of one celestial body falls on another The Earth / Moon system experiences two types of eclipses; solar and lunar

11 Tides on Earth Bulges in Earth’s oceans, called tidal bulges, form because the moon’s gravitational pull on Earth. As a result, the ocean on the side of the Earth closest to the moon is pulled toward the moon. Because Earth rotates, tides occur in a regular cycle at any point on Earth’s surface each day as the location passes through a tidal bulge or moves away from a tidal bulge.

13 Timing of Tides on Earth

15 Comets Comet = A body of rock, dust, methane, ammonia, and ice which orbits the sun in long ellipses Comets have a head and a tail Comets lose mass as they orbit the sun because ice melts when the comet is near the sun The most famous comet is Halley’s comet. The comet can be seen every years from Earth 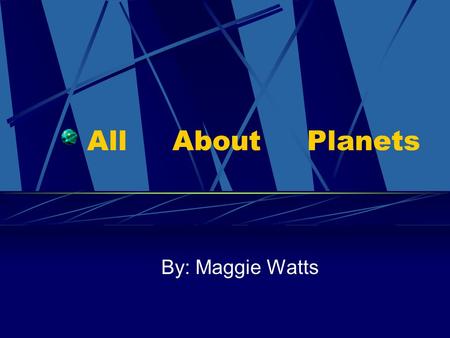 All About Planets By: Maggie Watts. Mercury This planet is not large enough for its gravity to hold onto a moon or much of an atmosphere. 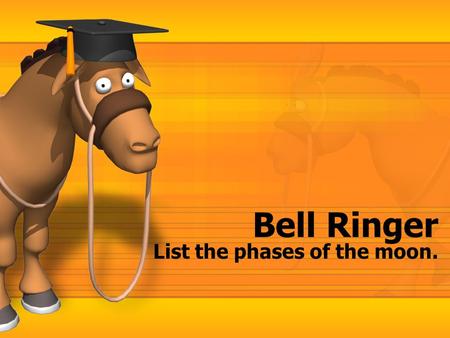