Presentation on theme: "Bankruptcy and the Bankruptcy Abuse Prevention and Consumer Protection act of 2005."— Presentation transcript:

2 Do creditors need the protection of the law? Why or why not?

8 Federal Bankruptcy Law Article I, section 8, clause 4 of the U.S. Constitution provides that “The congress shall have the power...to establish... uniform laws on the subject of bankruptcies throughout the United States.” Bankruptcy law is federal law. There are no state bankruptcy laws.

9 The Fresh Start The primary purpose of federal bankruptcy law is to discharge the debtor from burdensome debts. The law gives debtors a fresh start by freeing them from legal responsibility for past debts.

13 Liquidation Bankruptcy - Chapter 7 The most familiar form of Bankruptcy. –The debtor’s nonexempt property is sold for cash, –The cash is distributed to the creditors, and –Any unpaid debts are discharged.

14 Liquidation Bankruptcy - Chapter 7 (continued) Any person (including individuals, partnerships, and corporations) may be debtors in a Chapter 7 proceeding. Certain businesses (including banks, savings and loan associations, credit unions, insurance companies, and railroads) are prohibited from filing bankruptcy under Chapter 7.

16 Reorganization Bankruptcy – Chapter 11 (continued) Chapter 11 is used primarily by businesses to reorganize their finances under the protection of the Bankruptcy Court. The debtor usually emerges from bankruptcy a “leaner” business, having restructured and discharged some of its debts.

18 Debtor-in-Possession A debtor who is left in place to operate the business during the reorganization proceeding. The court may appoint a trustee to operate the debtor’s business only upon a showing of cause.

19 Creditors’ Committee The creditors holding the seven largest unsecured claims are usually appointed to the creditors’ committee. Representatives of the committee appear at Bankruptcy Court hearings, participate in the negotiation of a plan of reorganization, assert objections to the plan, etc.

20 Automatic Stay The result of the filing of a voluntary or involuntary petition. The suspension of certain actions by creditors against the debtor or the debtor’s property. Relief from stay – asked for by a secured creditor.

21 Plan of Reorganization A plan that sets forth a proposed new capital structure for the debtor to have when it emerges from reorganization bankruptcy. The debtor has the exclusive right to file the first plan of reorganization. Any party of interest may file a plan thereafter.

22 Executory Contracts A contract that has not been fully performed. Chapter 11 reorganization bankruptcy permits a debtor (with court approval) to assume or reject executory contracts. –e.g., leases for office space, and sales and purchase contracts.

23 Rejection of Collective Bargaining Agreements A collective bargaining agreement may be rejected or modified as an executory contract if: 1. It is necessary to the reorganization, 2. The debtor acted in good faith, and 3. The balance of the equities favors rejection or modification of the agreement.

27 Discharge Upon confirmation of a plan of reorganization, the debtor is granted a discharge of all claims not included in the plan. The plan is binding on all parties once it is confirmed.

28 Chapter 13 Consumer Debt Adjustment A rehabilitation form of bankruptcy that permits the courts to supervise the debtor’s plan for the payment of unpaid debts by installments.

29 Filing the Petition A Chapter 13 proceeding can be initiated only by the voluntary filing of a petition by the debtor. –Must allege insolvency or inability to pay debts as they become due –Extension gives longer period to pay debt –Composition provides for reduction of debt Creditors cannot file an involuntary petition to place a debtor in Chapter 13 bankruptcy.

30 Automatic Stay The filing of a Chapter 13 petition automatically stays: –Liquidation bankruptcy proceedings –Judicial and non-judicial actions by creditors to collect prepetition debts from the debtor –Collection activities against co-debtors and guarantors of consumer debts –Obtaining, perfecting, or enforcing liens –Attempts to set off debts

33 Discharge A discharge is granted to a debtor in a Chapter 13 consumer debt adjustment bankruptcy only after all the payments under the plan are completed by the debtor. Even if the debtor does not complete the payments called for in the plan, the court may grant the debtor a hardship discharge.

38 Meeting of Creditors Within 10 to 30 days of the court granting the order for relief, the court will call a first meeting of creditors Judge will not be present Debtor must answer questions, but can have counsel Bankruptcy trustee is elected

40 The Bankruptcy Estate An estate created upon the commencement of a Chapter 7 proceeding. It includes all the debtor’s legal and equitable interests in real, personal, tangible, and intangible property, wherever located, that exist when the petition is filed, minus exempt property.

41 Exempt Property Property that may be retained by the debtor pursuant to federal or state law. Debtor’s property that does not become part of the bankruptcy estate. The Bankruptcy Code also permits states to enact their own exemptions. Many states require the debtor to file a Declaration of Homestead prior to bankruptcy.

45 Discharge The termination of the legal duty of a debtor to pay debts that remain unpaid upon the completion of a bankruptcy proceeding. Only individuals may be granted a discharge. –Not all debts are dischargeable in bankruptcy. Discharge is not available to partnerships and corporations.

46 Acts That Bar Discharge Certain acts by the debtor may bar discharge: Making false representations about his or her financial position when he or she obtained an extension of credit Transferring, concealing, or removing property from the estate with the intent to hinder, delay, or defraud creditors

47 Acts That Bar Discharge (continued) Falsifying, destroying, or concealing records of his or her financial condition Failure to account for any assets Failure to submit to questioning at the meeting of the creditors (unless excused)

48 Fraudulent and Preferential Transfers The Bankruptcy Code prevents debtors from making unusual payments or transfers of property on the eve of bankruptcy that would unfairly benefit the debtor or some creditors at the expense of others.

51 1) The founders of the United States thought the plight of debtors was so important that they included a provision in the U.S. Constitution. 2) Bankruptcy cases are heard in federal courts. 3) One of the goals of federal bankruptcy law is to give debtors a chance at a fresh start financially.

52 Chapter 33Quiz 4) The Bankruptcy Abuse Prevention and Consumer Protection Act of 2005, makes it easier for debtors to escape from their debts under federal bankruptcy law. 5) In addition to federal bankruptcy laws, there are individual state bankruptcy laws as well. 6) Under the 2005 Act, a debtor may be given only a partial fresh start as s/he may have to pay more of their pre-petition debts out of post-petition earnings.

53 Chapter 33Quiz 7) The U.S. Trustee may perform many of the tasks that the bankruptcy judge had previously performed. 8) An involuntary petition for bankruptcy is filed by creditors and places the debtor into bankruptcy. 9) Attorneys may be fined for factual discrepancies under the 2005 Act. 10) The effect of an automatic stay is to suspend certain legal actions by creditors against the debtor or debtor’s property.

Download ppt "Bankruptcy and the Bankruptcy Abuse Prevention and Consumer Protection act of 2005." 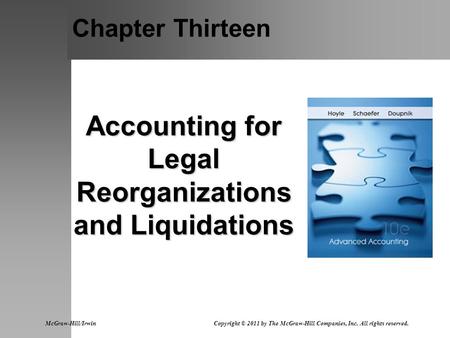 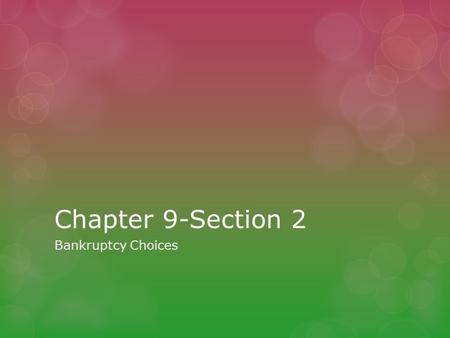 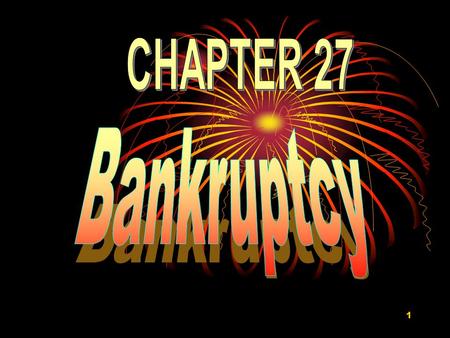 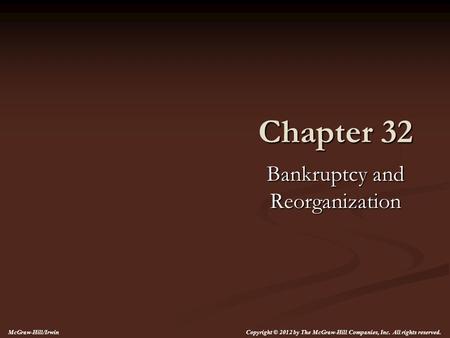 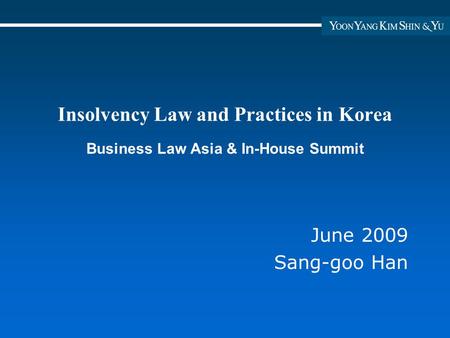 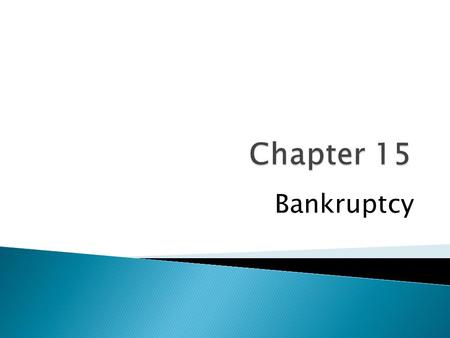 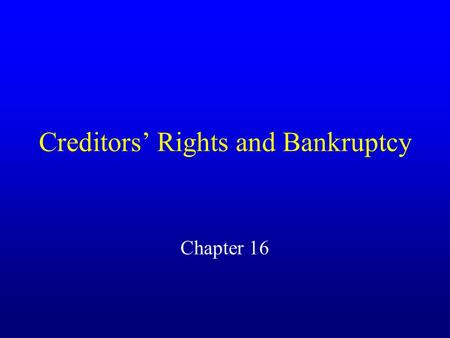 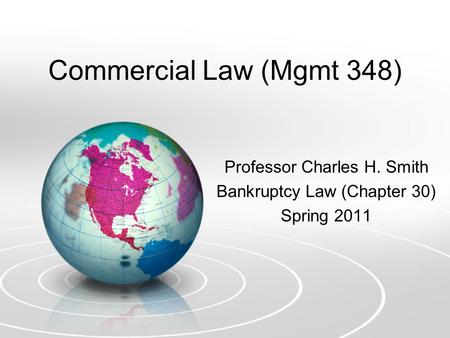 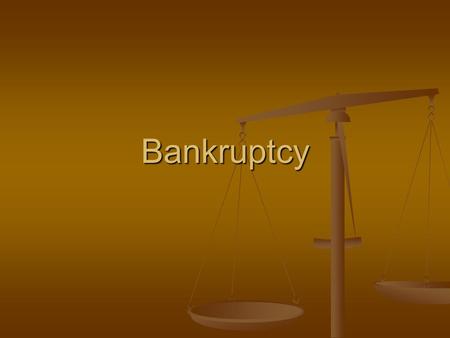 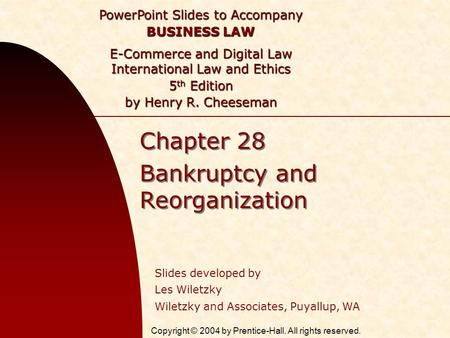 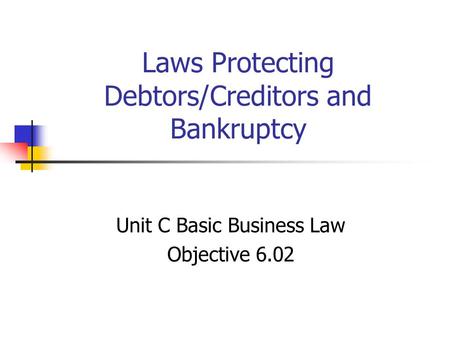 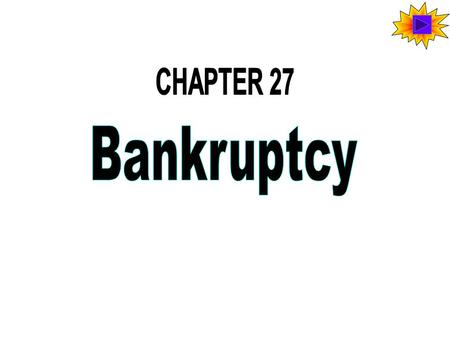 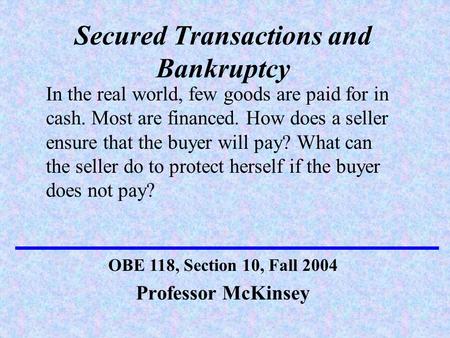 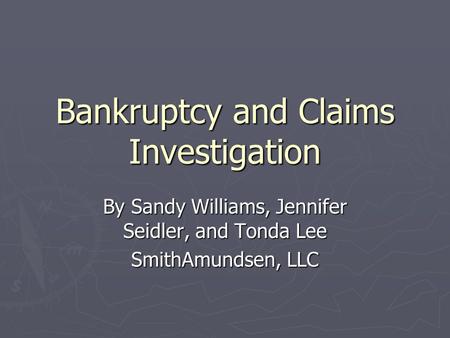 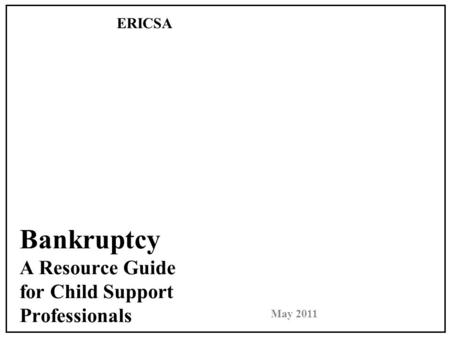 Bankruptcy A Resource Guide for Child Support Professionals ERICSA May 2011. 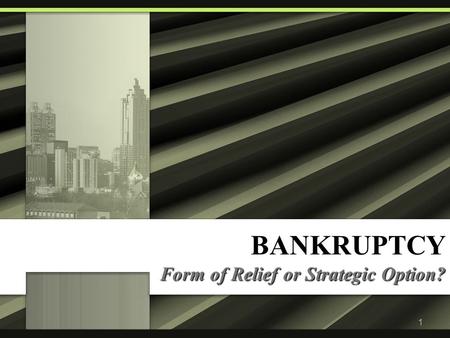 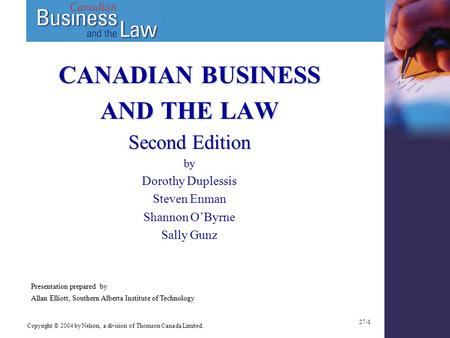 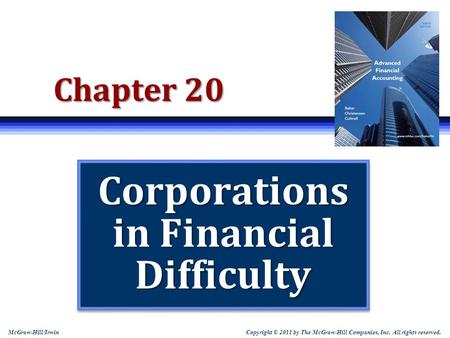 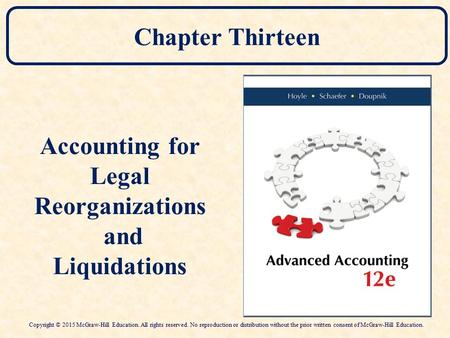