4  This is when the cell is preparing to divide.  The LONGEST phase of the cell. cycle  90% of the cell’s life is spent in Interphase  G1 – first growth phase: The cell doubles in size and the organelles double.  S – synthesis phase: the DNA that makes up the chromatin is copied (DNA replication) this is the longest phase of interphase.  G2 – second growth phase: Growth and preparation for mitosis.

6  Mitosis The nucleus of a cell is divided into two nuclei with the same number of chromosomes. Consists of 4 phases  Prophase  Metaphase  Anaphase  Telophase

10  Chromosomes line up in the middle of the cell. 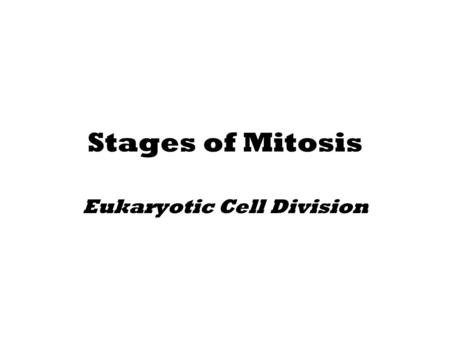 Stages of Mitosis Eukaryotic Cell Division. Cell Division Facts All living organisms start out from a single cell The average Human has about 10 trillion.