6 Interphase  G1 – first growth phase:  The cell doubles in size and the organelles double.  S – synthesis phase:  the DNA that makes up the chromatin is copied (DNA replication) this is the longest phase of interphase.  G2 – second growth phase:  Growth and preparation for mitosis.  This is when the cell functions as the type of cell it is and then prepares to divide.  The LONGEST phase of the cell cycle.  90% of the cell’s life is spent in Interphase. The cell does not look unique. The nucleus and the nucleolus are visible; The nuclear membrane is intact and visible.

10 Metaphase  Chromosomes line up in the middle of the cell.

11 Anaphase  Centromeres of each chromosome split.  Spindle fibers contract and separate the two sister chromatids pulling them to opposite poles.  Each chromatid becomes a separate (non-replicated) chromosome in each daughter cell.

13 Cytokinesis  NOT part of mitosis.  The cytoplasm divides into two cells.  Cell membrane reforms.  In plant cells the cell wall reforms and the cell membrane is laid down. 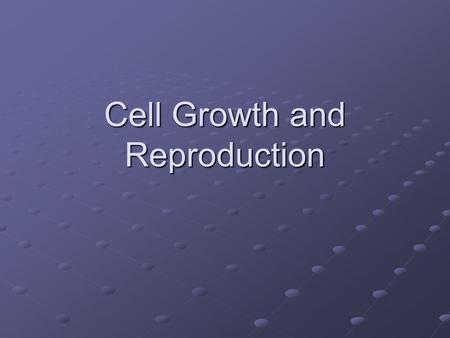