1 The Late Roman Republic “From Republic to Empire”

4 Marcus Licinius Crassus MARCVS·LICINIVS·CRASSVS Wealthiest man in Rome –Fire department Term “crass” named for him –adjective, 1.without refinement, delicacy, or sensitivity; gross; obtuse 53 BC – Killed by the Parthians –His head was used as a prop in a play

5 Pompey the Great CNAEVS·POMPEIVS·MAGNVS 48 BC – Caesar defeated him at the Battle of Pharsalus; Pompey fled to Egypt and was assassinated –King Ptolemy presented Pompey’s head as a gift when Julius Caesar arrived in Egypt

8 Julius Caesar CAiVS·IVLIVS·CAESAR 44 BC – Ides of March (March 15), Assassinated by “friends” in the Senate

12 Octavian CaivsIVLIVSCAESAROCTAVIANVS General and politician Great-nephew of Julius Caesar In his will, Caesar adopted Octavian as a son and heir to his estate Hunted down Caesar’s assassins

18 Octavian  Augustus Caesar CaivsIVLIVSCAESAROCTAVIANVS  IMPeratorCAESARDIVIAVGVSTVS Promised the Senate that he would restore peace Offered to give up his power Senate proclaimed him –princeps (first citizen) –Augustus (revered one; exalted one) 27 BC – Octavian became Augustus Caesar, Rome’s first emperor

21 The Roman Empire and its comparison with Star Wars = ?

22 Began as a republic and later became an empire

27 Rome –Largest city on Earth at the time Coruscant

Download ppt "The Late Roman Republic “From Republic to Empire”." 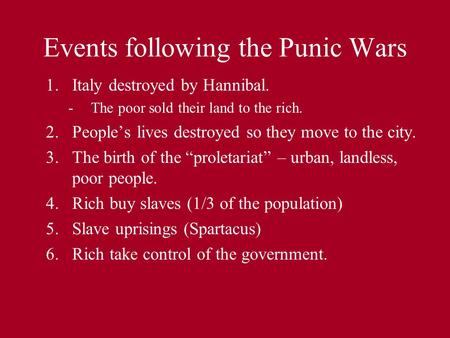 Events following the Punic Wars 1.Italy destroyed by Hannibal. -The poor sold their land to the rich. 2.People’s lives destroyed so they move to the city.