2 L A B O R Most people think of how much money they can earn when they consider a career. What determines how much a person is paid for their job? Surgeons make lots of money, Social Workers do not make that much.

3 L A B O R It is a matter of supply and demand.
Labor is a commodity that is bought and sold. Wages are high in professions where supply is low and demand is high. Doctors are in short supply and in high demand. Hardly anyone needs a widget maker, so widget makers earn very little if anything at all.

4 L A B O R Employment or unemployment in a labor market depends on how closely the demand for workers – the number of available jobs – needs the supply of workers seeking jobs. Demand for labor comes from private firms and government agencies that hire workers to produce goods or services.

5 L A B O R In a competitive labor market, workers are usually paid according to the value of what they produce. i.e. cooks are paid a wage that reflects their productivity. Productivity is the value of output

6 L A B O R Labor Demand is negatively sloped – meaning that the higher the price of labor, the smaller the quantity of labor demanded by firms and government.

7 L A B O R The supply of labor comes from people who provide labor in exchange for wages. The supply curve for labor is positively sloped, the higher the wages, the larger the quantity of labor supplied. The higher the wage for a job, the greater the number of people attracted to the job.

8 L A B O R Market Equilibrium is where the quantity demanded equals the quantity supplied. The supply of labor and the demand for it – combine to determine an equilibrium price. Equilibrium Wage – the wage rate that produces neither a surplus of workers nor a shortage of workers in the labor market.

9 L A B O R Wages & Skill Levels:
Why do lawyers earn more money than carpenters, and carpenters more than cashiers? Wages vary according to workers’ skill levels and education, as well as according to supply and demand.

11 L A B O R Jobs are categorized into four skill levels:
3. Skilled Labor – requires specialized abilities and training to do tasks such as operating complicated equipment. These workers need little supervision. They earn an hourly wage rather than a salary. i.e. auto mechanics, bank tellers, plumbers, firefighters, and etc.

13 L A B O R Another reason that earnings vary is differences in working conditions. Many factors affect the number of workers who are willing to do a certain job. The level of danger The physical or emotional stress involved The location Weather conditions in the area

14 L A B O R Workers who do dangerous jobs require compensation for the risks they take.

15 L A B O R Wage Discrimination – this occurs when people with the same job, same skills, and education, same job performance, and same seniority receive unequal pay. The government gets involved with this type of practice. This is illegal in the US. Most people affected by this practice are women and minority workers.

16 L A B O R Business defend the wage discrimination in two ways:
1. Men needed the money to support families while women were simply working to earn some extra cash. 2. Also the assumption that women would leave their jobs at some point to have children.

17 L A B O R There are laws against wage discrimination.
1960s – laws to prevent companies from paying lower wages based on race or gender. 1963 – Equal Pay Act – require that male and female employees in the same workplace performing the same job receive the same pay.

18 L A B O R 1964 – Title VII {Civil Rights Act} prohibited job discrimination based on race, sex, color, religion, or nationality. Equal Employment Opportunity Commission (EEOC) enforces the laws in this country. They also handle complaints and will take companies to court to form them to follow the law.

19 L A B O R Women have still had gaps in their pay compared to men’s salaries. Even with the laws in place. The gap is being closed. The gap has resulted because of the following: 1. Women’s Work – have been encouraged to pursue careers such as nursing, teaching, etc

20 L A B O R 2. Human Capital – women have in the past had less education, training, and experience in certain occupations than men. This makes women’s labor less productive in the economy. 3. Women’s Career Paths – Some employers assume that female workers are not interested in career advancement.

21 L A B O R Glass Ceiling – an unofficial, invisible barrier that prevents women and minorities from advancing in business dominated by men. Minorities tend to also earn less money than whites. The gap between these two groups have closed in the last decade and is closing more and more each year.

22 L A B O R Other factors that affect wages:
1. Minimum Wage Laws – Fair Labor Standards Act. Created a minimum wage or lowest wage that can paid for an hour of work. 2. Safety Laws – if a law of policy increases safety at work, it may also decrease wages because workers are willing to work for lower wages when jobs are safer.

23 L A B O R 3. Employees respond to wage levels – companies try to cut costs by replacing workers with machines. 4. Unions – labor unions have fewer members today than they did when they first started, they still affect the level of wages for certain jobs.

25 L A B O R Unions have made a practice called featherbedding - the practice of negotiating labor contracts that keep unnecessary workers on a company’s payroll. i.e. Railroad industry and the Caboosemen 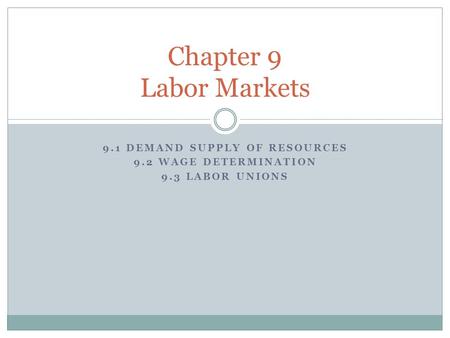 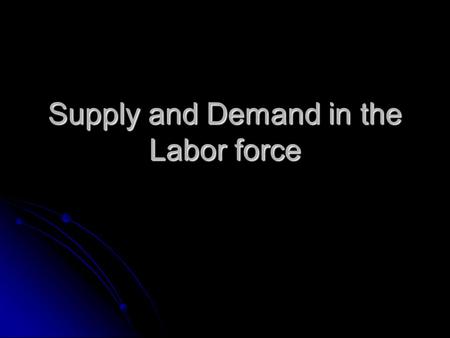 Supply and Demand in the Labor force. Effects of Wage Increases A new restaurant opens in town, offering higher wages for cooks. Other restaurants must. 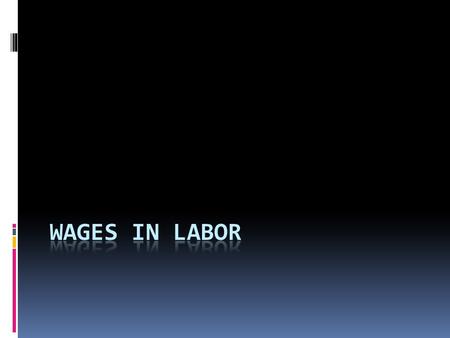 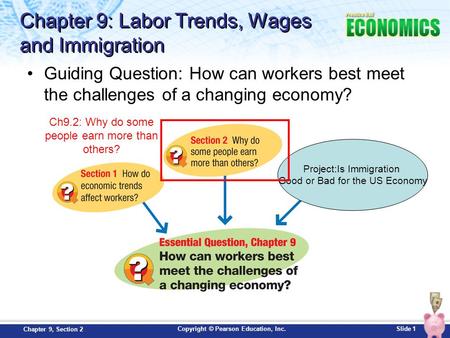 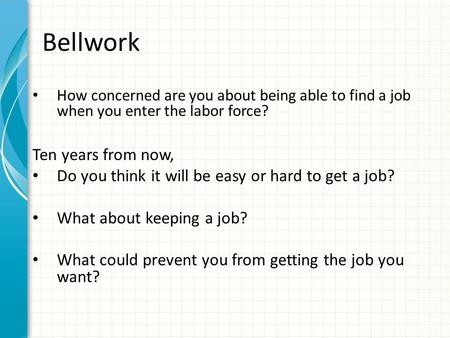 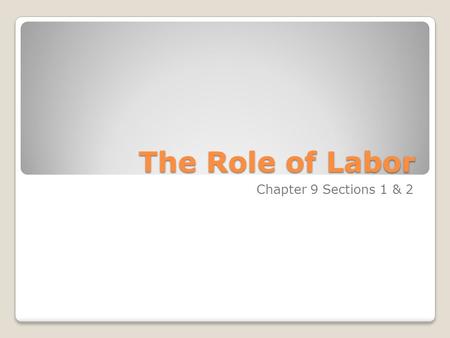 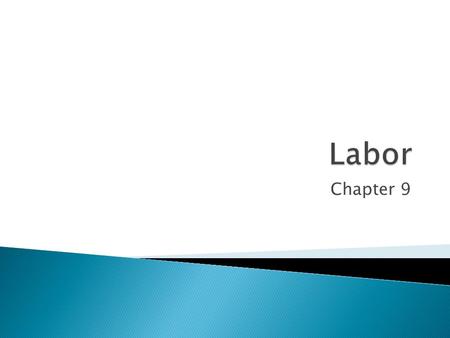 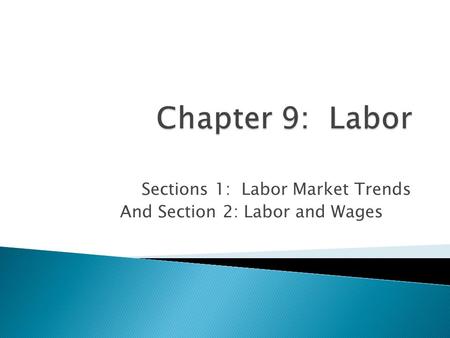 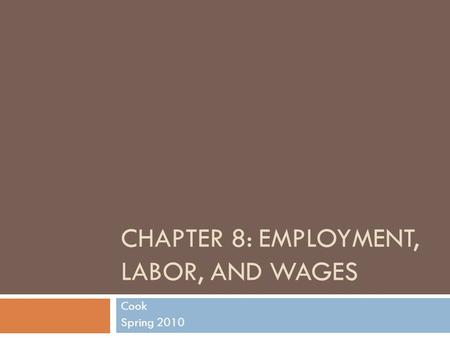 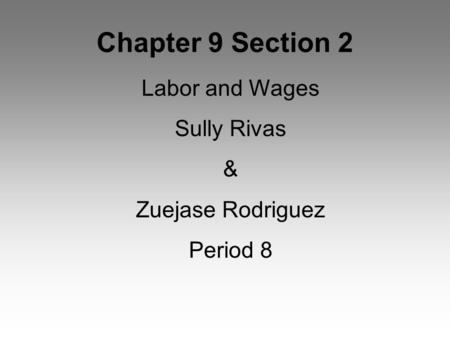 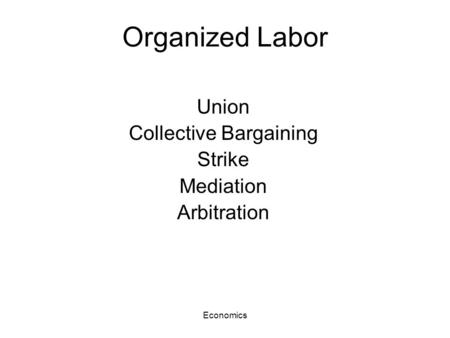