2 How Atoms Differ Objectives: 3.2 Calculating the number of protons, neutrons, and electrons in an isotope

4 Atomic Number (cont.) What is the charge of a proton? Where are protons found? What else is in the nucleus? What would be the charge of the NUCLEUS of the following elements: –Hydrogen? –Lead? –Chlorine?

7 Isotopes and Mass Number How Dalton’s atomic theory was wrong: –Atoms ARE divisible. (Who is credited with first splitting an atom?) –All atoms of a particular element are NOT identical. All atoms of an element do have the same number of protons and electrons, so what could differ?

15 Mass of Individual Atoms (cont.) We ALL want to work with whole numbers, so scientists came up with the atomic mass unit (amu). Def.: 1/12 the mass of a carbon-12 atom (ALMOST equal to the mass of 1 proton or 1 neutron)

16 Mass of Individual Atoms (cont.) Review: What does the mass number of an element tell you? The mass recorded on the periodic table for an element is called atomic mass. Atomic mass is determined by the weighted average mass of the isotopes of that element. 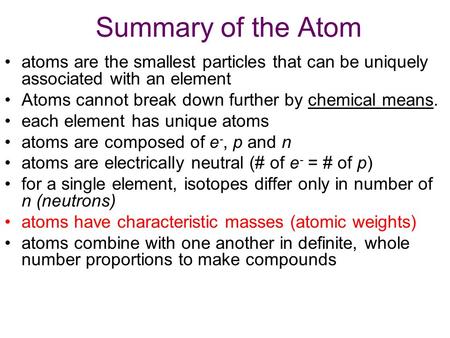 Summary of the Atom atoms are the smallest particles that can be uniquely associated with an element Atoms cannot break down further by chemical means. 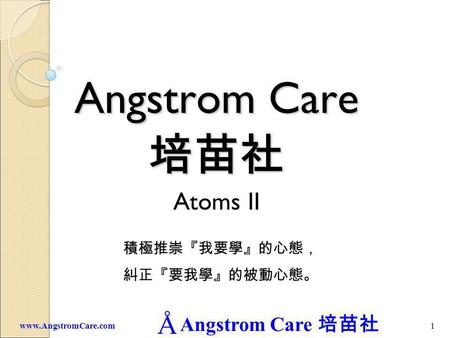 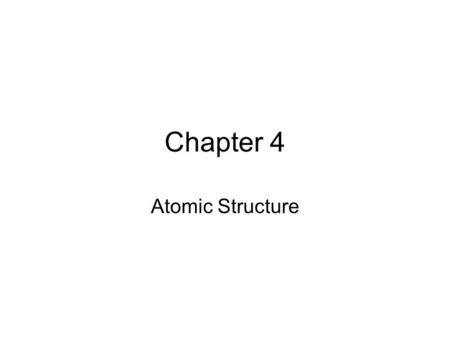 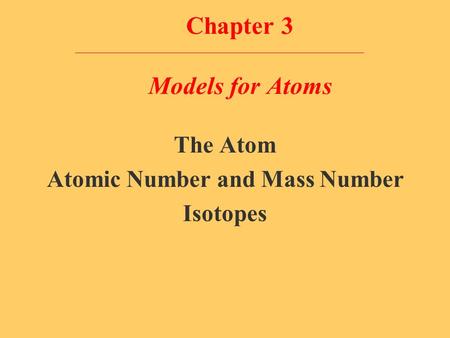 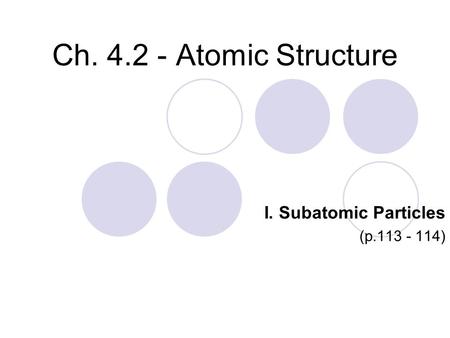 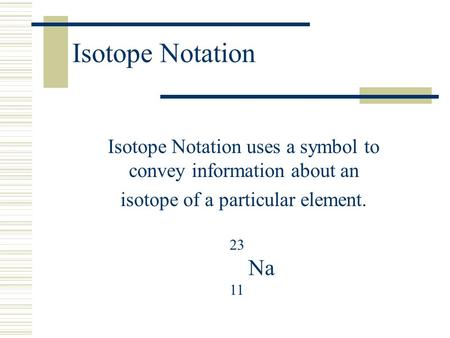 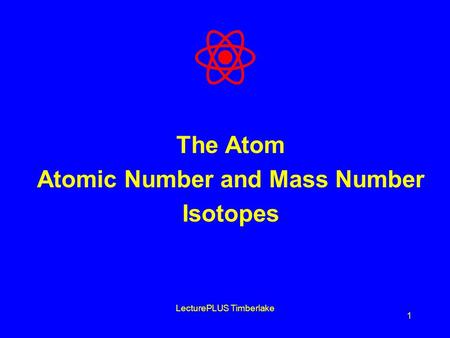 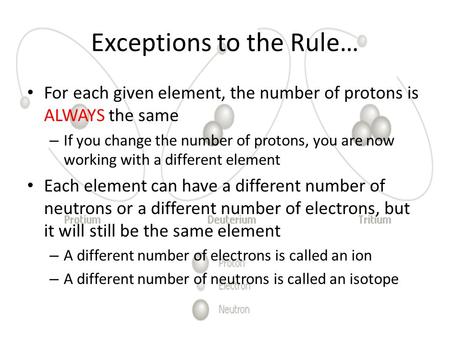 Exceptions to the Rule… 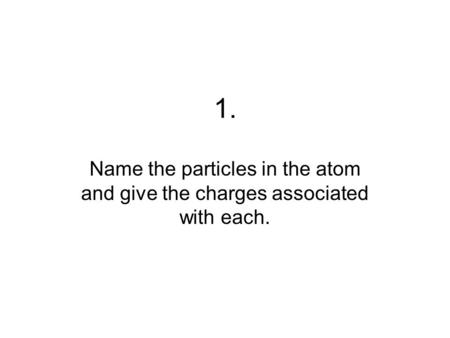 1. Name the particles in the atom and give the charges associated with each. 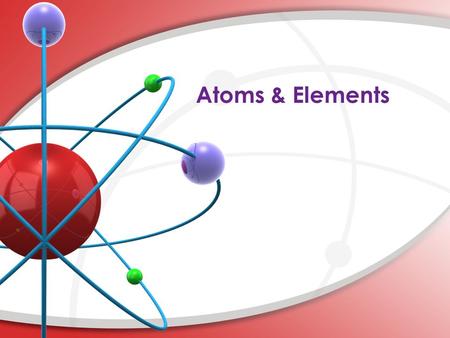 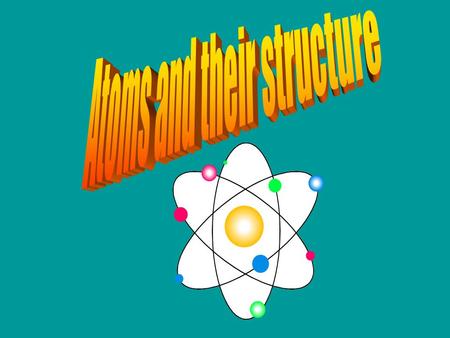 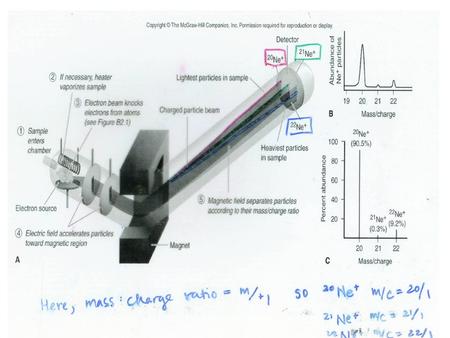 The stick diagram for molybdenum looks lilke this: MS for Mo 1.How many isotopes does Mo have? 2.Write symbol for each isotope. 3.Which isotope is most. 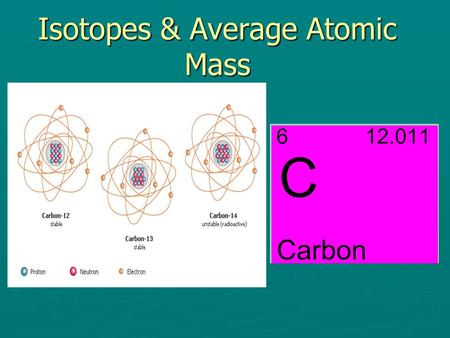 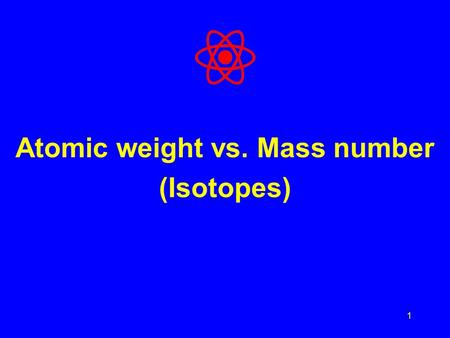 1 Atomic weight vs. Mass number (Isotopes). Mass Number Mass Number = Protons + Neutrons What about electrons? Electrons are so small relative to the. 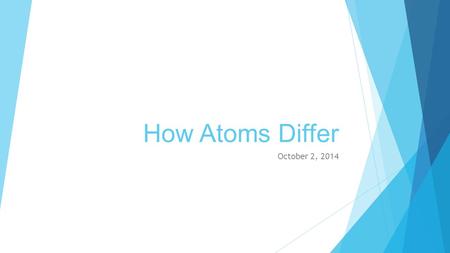 How Atoms Differ October 2, Reading an Element  A – Atomic Number: the number of protons in an atom (this identifies the element)  B – Average. 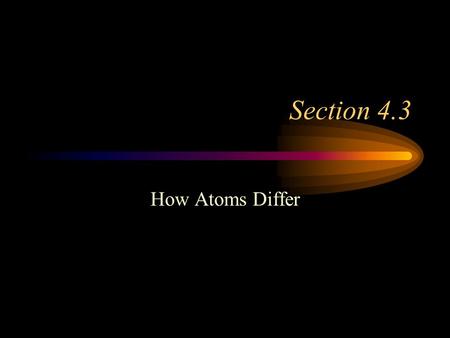 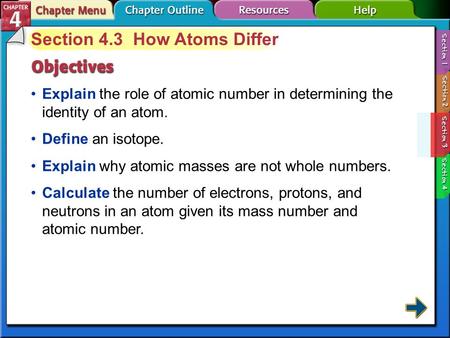 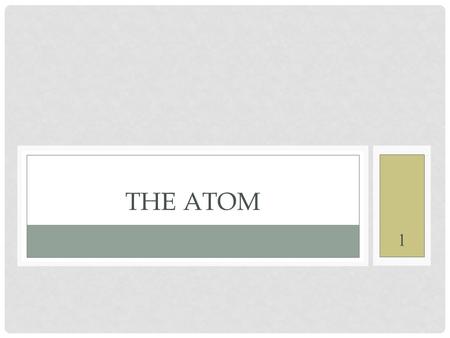 1 THE ATOM. NUCLEAR MODEL OF THE ATOM An atom is an electrically neutral particle Composed of protons, neutrons, and electrons. Atoms are spherical in. 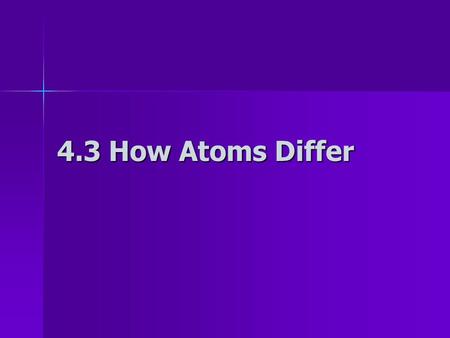 4.3 How Atoms Differ Atomic Number - Atomic Number = # protons in an atom - # of protons determines kind of atom (atoms of an element always have the.