1 Arrangement of Electrons in Atoms

2 New Atomic Model Rutherford’s model didn’t explain how the negatively charged particles were distributed around the nucleus. Why weren’t the negative electrons being attracted to the positive nucleus?

3 Studies involving the absorption and emission of light by matter provided additional information.
These studies revealed an relationship between light and electrons that led to a revolutionary view of the nature of energy, matter, and atomic structure.

4 Properties of Light Many of light’s properties can be described in terms of waves. Wavelength : the distance between corresponding points of adjacent waves. Frequency: the number of waves that pass a given point in a specific time, usually 1 second. The relationship between wavelength and frequency is inversely proportional…as the wavelength of light decreases, its frequency increases and vice versa

6 Einstein Einstein expanded on Planck’s theory by introducing the idea that electromagnetic radiation acts as both particles and waves. While light exhibits many wavelike properties, it can also be thought of as a stream of particles called photons. Photon: a particle of light carrying a quantum of energy.

7 Hydrogen Line Emission Spectrum
Ground state: the lowest energy state of an atom. Excited state: an atom has a higher potential energy than it has in its ground state. When an excited atom returns to its ground state, it gives off the energy it gained in the form of electromagnetic radiation. The production of colored light in neon signs is an example of this.

8 When an electric current was passed through a vacuum tube containing hydrogen, a pinkish glow was observed. The specific and unique bands of light produced when a narrow beam of the light was shined through a prism, is known as Hydrogen’s Line Spectrum.

10 Classical Theory Why did the hydrogen atoms only give specific frequencies (colors) of light? Attempts to explain this observation led to a new atomic theory called quantum theory .

11 When an excited hydrogen atom falls to its ground state or to a lower-energy excited state, it emits a photon of radiation. The energy of this photon (E = hv) is equal to the difference in energy between the atom’s initial and final states. The fact that only specific frequencies were seen indicated that energy levels in atoms were fixed or that electrons exist only in specific energy levels.

12 Bohr Model of Hydrogen Atom
Niels Bohr proposed a hydrogen atom model that linked the atom’s electron to photon emission. Bohr proposed that the electron can circle the nucleus only in allowed paths or orbits and each orbit is associated with a fixed energy. The electron is in its lowest energy state when it is in the orbit closest to the nucleus.

13 Energy levels can be thought of like rungs on a ladder with empty space between the rungs. You can stand on any rung, but not on the space in between. Higher energy is required to reach a higher rung. Likewise, an atom must gain energy to move an electron from a lower energy level to a higher energy level.

14 Quantum Model Heisenberg Uncertainty Principle: it is impossible to determine both the position and velocity of an electron. Think of trying to find a balloon in a dark room. Any attempt to locate the balloon affects its location. Electrons are detected by their interactions with photons. Because photons have about the same energy as electrons, any attempt to locate a specific electron with a photon knocks it off course.

15 Quantum theory tells us that electrons don’t travel around the nucleus in specific orbits.
They exist in certain regions called orbitals. Orbital: a three dimensional region around the nucleus that indicates the probable location of an electron.

16 Atomic Orbitals and Quantum Numbers
Scientists use quantum numbers to completely describe orbitals Quantum Numbers: specify the properties of atomic orbitals and the properties of electrons in those orbitals The first three quantum numbers indicate the main energy level, the shape, and the orientation of an orbital on an axis. The fourth describes the a fundamental state of the electron occupying the orbital.

17 Principal Quantum Number
Principle quantum number: indicates the main energy level occupied by the electron. symbolized by “n” Values of n are positive integers (1,2,3…etc) As “n” increases, the electron’s energy and its average distance from the nucleus increases. More than one electron can have the same “n.” Electrons with the same “n” are said to be in the same shell. The total number of orbitals for any given shell is n2.

18 Angular Momentum Quantum Number
For all but n=1, orbitals of different shapes, or sublevels, exist for a given value of n. Angular momentum quantum number: indicates the shape of the orbital. symbolized by “l” The value of “l” are zero and all positive integers up to n-1 For any energy level, the number of orbital shapes equals n. Example: What values of l are possible with a n value of 3?

20 In the first energy level, n=1 there is only one sublevel possible-an s orbital
For n=2 there are two sublevels corresponding to s and p orbitals What would you expect to see for the third and fourth energy level?

21 Magnetic Quantum Number
Magnetic quantum number: indicates the orientation of an orbital around a nucleus. Symbolized by “m.” Values of m are whole numbers, including zero between –l to +l Orbitals can have same shape, but different orientation around the nucleus. What is the total # of orbitals in the 3rd energy level.

28 Aufbau Principle The first rule shows the order in which electrons occupy orbitals Aufbau Principle: an electron will occupy the lowest-energy orbital that can receive it. The orbital with the lowest energy is the 1s orbital 2s is the next highest energy level, etc.

30 Hund’s Rule Hund’s Rule: electrons will spread out before they pair up. This minimizes the electron-electron repulsion which results in lower energy. Look at p orbitals: One electron will enter each of the three p orbitals in a main energy level before a second electron enters any of them.

31 Writing Configuration
Two types of showing configuration Orbital Notation: an unoccupied orbital is represented by a line with arrows of different directions drawn to represent electrons. Electron Configuration: the number of electrons in a sublevel are is shown by adding a superscript to the sublevels. Ex: Boron has an atomic number of 5, therefore has 5 electrons.

32 Example: Boron is atomic number 5 and therefore has 5 electrons.
Electron configuration is 1s22s22p1 Notice the sum of the superscripts is equal to the number of electrons! Now try orbital notation. 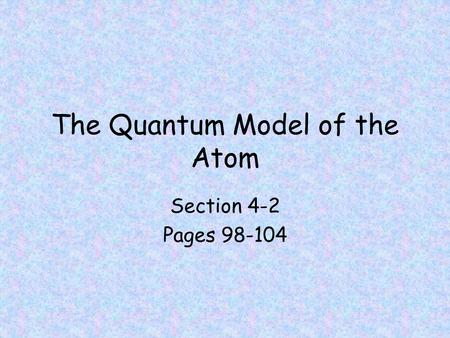 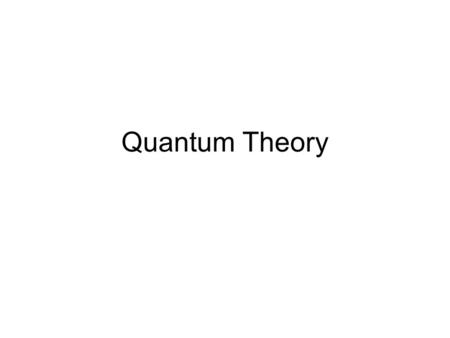