Presentation on theme: "Handel’s Water Music Suite no. 2 in D major (c. 1717) An introduction to the set work."— Presentation transcript:

2 George Frideric Handel (1685-1759) 0 A leading composer of the Baroque period (c. 1600-1750). 0 Born in Germany – early musical experiences at Hamburg Opera House. Then travelled to Italy in 1706. 0 In Italy, he mingled with leading Italian composers of the day – Corelli, Scarlatti. Handel absorbed many of the features of Italian instrumental and operatic music into his own compositional style. 0 Returned to Germany in 1710 – role of Kapellmeister in Hanover under the Elector (ruler) of Hanover – this ruler later became George I of England (in 1714). 0 Around 1710 – invited to write an opera for a performance in London (Rinaldo). This was a big success and he decided to settle in London and pursue his operatic career. 0 The decision was made all the more sweeter in 1713, when Queen Anne gifted him an annual pension of £200. However, this is said that this gift also brought about his dismissal from his Hanover post in 1713. Was his relationship a bit too close to Queen Anne?

3 Further Context 0 Queen Anne died in 1714 and was succeeded by George I – good relations with Handel were restored. 0 Handel was asked to write a Te Deum for the King’s coronation. His pension was increased to £600 per year. 0 A Te Deum is a hymn of praise. 0 Handel lived in London for the rest of his life, initially composing mostly operas in the Italian opera seria (opera on ‘serious’ subjects) such as Julius Caesar (1724) and Rodelinda (1725). 0 Operas in this style were declining in popularity from 1730s and Handel switched over to the composition of dramatic oratorios in English – unstaged dramas on religious subjects set to music). 0 His most famous work is an oratorio – Messiah (1742) – and others such as Samson (1743) and Solomon (1748). 0 Handel also contributed significantly to other musical genres – orchestral music (6 organ concertos), chamber music (sets of Trio Sonatas), church music (1727 coronation anthem for George II, Zadok the Priest), orchestral music for state occasions (Water Music c. 1717 and Music for the Royal Fireworks 1740). 0 Handel was blind for the last seven years of his life but continued composing until his death in 1759.

4 Background to the Water Music 0 King George I and his entourage arranged several royal boat trips along the River Thames in a bid to make him more visible to the public and increase his popularity. There was still a Catholic- Protestant feud going on. 0 The first of these boat trips probably took place in 1715 but it was the 1717 trip on the evening of 19 th July that is the most fully documented. It is known that the music of Handel’s three Water Music suites were performed at this event. 0 The ‘water party’ travelled from Whitehall to Chelsea and back, with several barges carrying the King, his entourage and other important people and a separate barge for the musicians.

5 Quote from The Daily Courant: 0 “A City Company’s Barge was employ’d for the Musick, wherein were 50 instruments of all sorts, who play’d all the way from Lambeth…the finest Symphonies, compos’d express for this Occasion, by Mr. Hendel; which his Majesty liked so well, that he caus’d it to be plaid over three times in going and returning.”

6 0 The King disembarked at Chelsea for supper, which was also accompanied by music, before travelling back to Whitehall, again with music playing. Another commentator added that the instruments consisted of trumpets, horns, oboes, bassoons, flutes, recorders and strings – and that each performance lasted about an hour, which suggests that music from all three Water Music suites were performed. 0 Handel wrote three suites of this type: - Suite no. 1 in F – known as the Horn Suite - Suite no. 2 in D – known as the Trumpet Suite - Suite no. 3 in G – known as the Flute Suite 0 Suites no. 1 & 2 are for louder, ‘outdoor’ instruments such as horns, oboes and trumpets so would have been easier to hear on the river. 0 Suite no. 3 is for quieter instruments (strings, harpsichord) and would have been hard to hear on the Thames – more suitable for the supper at Chelsea. 0 It is safe to assume that the instrumental parts in Suites nos. 1 and 2 were almost certainly doubled (i.e. 4 oboes, 2 bassoons, etc.) to make them easier to hear on the river.

7 Overall Structure 0 Suite no. 2 is in five movements. 0 Movements are as follows: Allegro – Alla Hornpipe – Menuet – Lentement – Bourree. 0 Each movement is in D major. 0 Each movement uses two oboes, bassoon, two horns, two trumpets and strings. 0 Three movements are based on popular dances: the hornpipe, menuet and bourree. 0 With the exception of Lentement, each movement has a lively tempo.

8 Baroque Dance Suite 0 The suite is a type of instrumental dance music that emerged during the Renaissance and was further developed during the Baroque period. 0 Consists of several movements or short pieces in the same key and functions as dance music or dinner music during social gatherings. 0 Dance music was very popular during the 16 th and 17 th century and composers were often asked to play such pieces during social functions. Musicians began collecting dance pieces in the same key – collectively they became known as “suites”. 0 By the time of JS Bach (1685-1750) and Handel, suites were composed of four main movements: Allemande, courante, sarabande and gigue. Optional movements included: air, bourree, gavotte, minuet, polonaise and prelude. 0 Each of the four main movements is based on a dance from another country – so each movement has a very characteristic sound and varies in time signature and rhythm.

9 Handel’s Baroque Dance Suite 0 Handel uses the following movements in his D major Water Music Suite: Allegro – Alla Hornpipe – Menuet – Lentement – Bourree Task: Research the five movements and look at their characteristics to identify what type of dance they are. 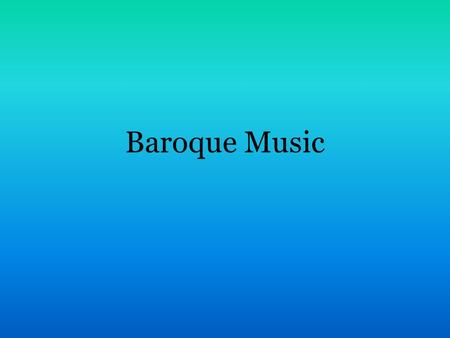 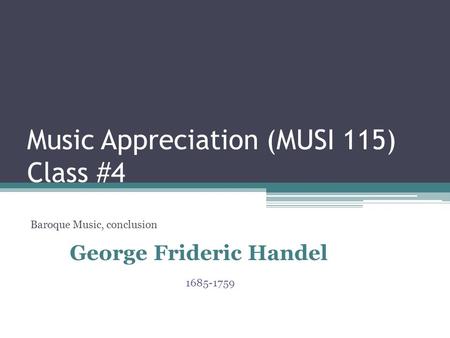