8 Quick Quiz The four wires shown in Figure, all carry the same current from point A to point B through the same magnetic field. In all four parts of the figure, the points A and B are 10 cm apart. Rank the wires according to the magnitude of the magnetic force exerted on them, from greatest to least.

9 Motion of a Charged Particle in a Uniform Magnetic Field
When the velocity of a charged particle is perpendicular to a uniform magnetic field, the particle moves in a circular path in a plane perpendicular to B. The magnetic force FB acting on the charge is always directed toward the center of the circle.

10 These results show that the angular speed of the particle and the period of the circular motion do not depend on the linear speed of the particle or on the radius of the orbit. The angular speed ω is often referred to as the cyclotron frequency because charged particles circulate at this angular frequency in the type of accelerator called a cyclotron.

11 If a charged particle moves in a uniform magnetic field with its velocity at some arbitrary angle with respect to B, its path is a helix if the field is directed in the x direction, as shown in Figure, there is no component of force in the x direction. As a result, ax =0, and the x component of velocity remains constant. However, the magnetic force q v x B causes the components vy and vz to change in time, and the resulting motion is a helix whose axis is parallel to the magnetic field. The projection of the path onto the yz plane (viewed along the x axis) is a circle

12 Example A proton is moving in a circular orbit of radius 14 cm in a uniform 0.35-T magnetic field perpendicular to the velocity of the proton. Find the linear speed of the proton Solution

18 magnitude in terms of the force per unit length

19 Ampère’s Law (a) When no current is present in the wire, all compass needles point in the same direction (toward the Earth’s north pole). (b) When the wire carries a strong current, the compass needles deflect in a direction tangent to the circle, which is the direction of the magnetic field created by the current

24 The Magnetic Field of a Solenoid

25 (a) Magnetic field lines for a tightly wound solenoid of finite length, carrying a steady current. The field in the interior space is strong and nearly uniform. Note that the field lines resemble those of a bar magnet, meaning that the solenoid effectively has north and south poles. (b) The magnetic field pattern of a bar magnet, displayed with small iron filings on a sheet of paper 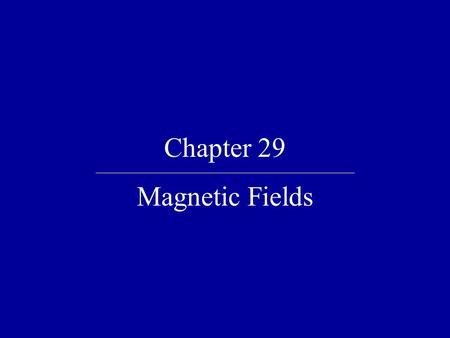 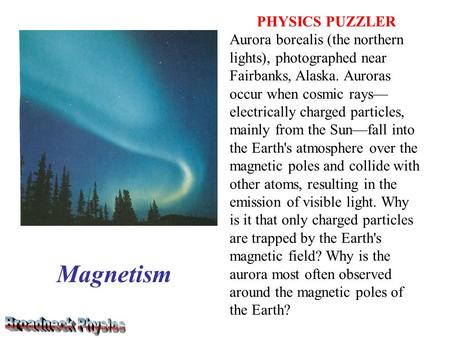 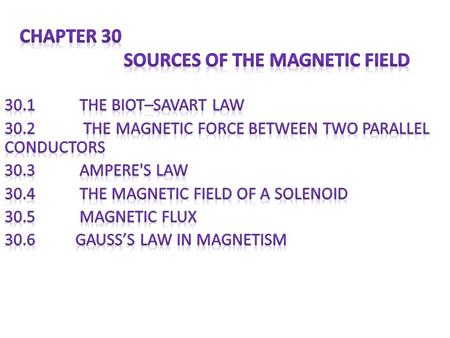 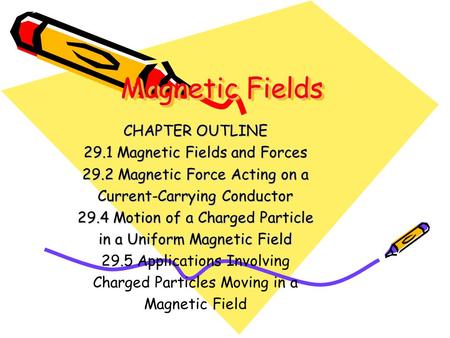 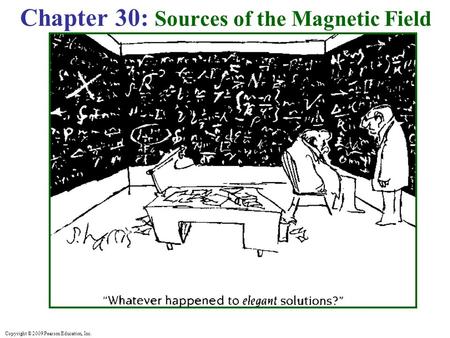 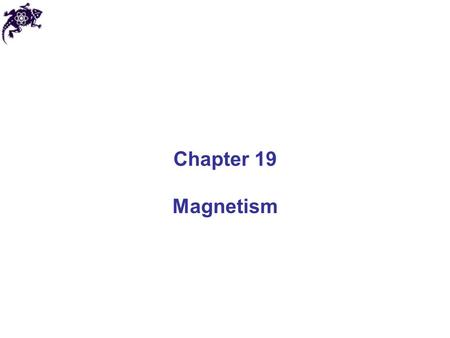