2 So what sets the wind in motion in the atmosphere?

4 Temperature & Elevation
When two columns of air are equal in elevation and density, they are at equilibrium. Adjusting the temperature by cooling (or heating) the entire column will increases (or decreases) the air density. Cooling Heating

5 While column 2 has a larger depth, the colder, denser column exerts the same amount of force at its base. Both columns still have the amount of air molecules but column 1 air molecules are confined to a smaller space. At the surface, equilibrium is maintained, but the taller column has greater upper-level pressure, and winds are generated…how?

6 Warm air aloft is normally associated with high atmospheric pressure and cold air above is correlated to low atmospheric pressure. The aloft pressure differences create a force that causes the wind to move from a higher pressure area to a lower pressure region. The removal of air molecules from column 2 causes the surface pressure from city 2 to fall. Conversely, over city 1 the pressure rises within the air column due to additional air from column 2. This force is known as the Pressure Gradient Force (PGF). HSFC LSFC

7 Pressure Fluctuations
Solar heating of ozone gases in the upper atmosphere, and of water vapor in the lower atmosphere, can trigger oscillating thermal (atmospheric) tides of sea-level pressure change due to absorption. This atmospheric tide is most noticeable in the tropics (~Δ 2.5 mb). In the middle latitudes, this tidal effect has a greater pressure fluctuation but the pressure pattern is not as discernable.

8 Measuring Pressure Air Pressure can be defined as the force exerted by air molecules over a given area. We may not feel the constant exertion of the billions of air molecules hitting our body but we can detect rapid changes such as one’s ears popping. Barometer is an instrument that measures the changes in atmospheric pressure.

10 Pressure Measurement Mercury Barometer Aneroid Barometer Changes in atmospheric pressure are detected by a change in elevation of a barometric fluid inside the glass tube or change in diameter of an aneroid cell, which indicates changing weather. Average sea level pressure is in Hg, or mb.

12 Pressure Reading & Reporting
Station pressure is the actual pressure observed at the station which accounts for corrected temperature, gravity, instrument error, and elevation of the location. Increasing the elevation of a station causes a decrease in the column of air above. To remove the effect of elevation, station pressure is readjusted to sea level pressure adding ~10mb/100m (standardizing all values to sea-level) Surface isobars show geographic trends in pressure, and are spaced at 4 mb intervals. **Isobars are equal lines of pressure**

22 Forces & Motion Air responds similarly as water to this force, moving from higher pressure to lower pressure. The atmosphere is a fluid. Pressure force is only one influence on the movement of atmospheric air. Other forces that determine atmospheric motion are 1)centripetal, 2) friction, and 3) Coriolis [apparent] forces.

25 PGF Driven Wind vs. Surface Observed Wind
Pressure gradient force (PGF) winds acting alone would blow directly into low pressure. Surface observations of winds, such as the cyclonic (counter-clockwise) flow around a low, reveal that PGF winds are deflected by other forces. Wind speed is greater where the pressure gradients are tighter.

26 “Apparent” Coriolis Force
Earth's rotation transforms straight line motion into curved motion for an outside viewer. The Coriolis force explains this apparent curvature of winds to the right due to rotation in the Northern Hemisphere. Its magnitude increases with wind velocity and earth's latitude.

27 Actual & Observed Paths
Airplane travel paths have an apparent curvature, just as Coriolis forces affect winds. Again, the deflection between actual and observed paths is greater near the poles.

46 Geostrophic Wind Winds have direction and magnitude, and can be depicted by vectors. Observed wind vectors are explained by the act of balancing the pressure gradient and Coriolis forces. Geostrophic wind is the result between the balance in PGF and Coriolis force. The geostrophic wind is a conceptual wind and can be calculated instead of taking an observation. It is usually a good estimate for the observed upper-level wind flow. These upper level geostrophic winds are parallel to pressure or height contours due to the lack of friction.

50 Centripetal Acceleration & Cyclones
Acceleration is defined by a change in wind direction or speed, and this occurs as winds circle around lows (cyclones) and highs (anticyclones). Centripetal force is the term for the net force directing wind toward the center of a low, and results from an imbalance between the pressure gradient and Coriolis forces. Centripetal force =Velocity2 /radius

51 Gradient wind is a wind that blows parallel to curved isobars or height contours without frictional effect. The forces that influence gradient wind are 1) PGF, 2) Coriolis force, and 3) centripetal force. Centripetal force is a virtual force.

54 Northern Hemispheric Low Pressure
The effect of PGF and Coriolis force alone. Remember there will be a centripetal force effect.

55 Southern Hemispheric Low Pressure
The effect of PGF and Coriolis force alone. Remember there will be a centripetal force effect.

56 Meridional & Zonal Flow
Wind direction and speed are indicated by lines, barbs, and flags, and appear as an archer's arrow. Upper level winds that travel north-south paths are meridional, and those traveling west-east paths are zonal.

57 Friction & Surface Winds
Surface objects create frictional resistance to wind flow and slows the wind, diminishing the Coriolis force and enhancing the effect of pressure gradient forces. The result is surface winds that travel across isobars, blowing out from highs, and in towards lows. The angle at which the wind crosses the isobars varies but the average is about 30°. The atmospheric layer which is influence by friction is called the friction layer or planetary boundary layer (PBL).

58 The effect of surface friction is to slow down the wind so that it crosses the isobars and is directed towards low pressure. Winds aloft is unaffected by friction and hence it will blow parallel to the contours. Surface wind can be estimated by observing the wind flow aloft associated with the movement of higher clouds. A rule of thumb is that surface wind is 30° to the left of the upper-level wind.

62 Sensing Highs & Lows The location of high and low pressure centers are estimated by detecting surface wind direction and noting pressure, Coriolis, and friction forces. This figure illustrates the procedure when standing aloft and at the surface.

63 Vertical Air Motion Winds converging into a low pressure center generate upward winds that remove the accumulating air molecules. These updrafts may cause cloud formation. Likewise, diverging air molecules from a high pressure area are replenished by downward winds. Large scale vertical motion is generally on the order of centimeters per second. Similar to the geostrophic balance, hydrostatic equilibrium is achieved when gravity and vertical PGF is balanced where nearly no net vertical acceleration exists even though vertical motion can still be on the order of centimeters per second. 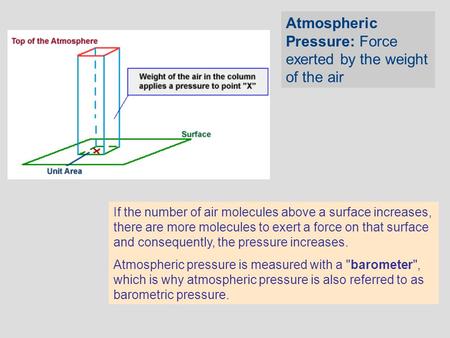 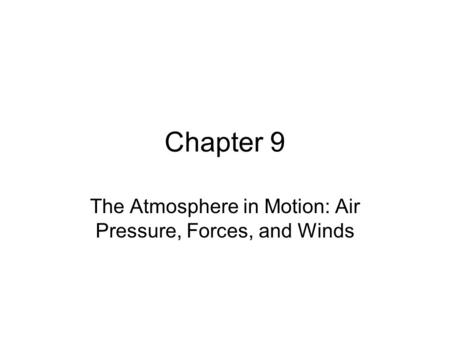 The Atmosphere in Motion: Air Pressure, Forces, and Winds 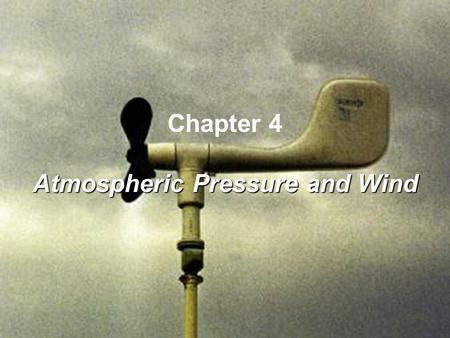