3 The Judiciary Article III of the U.S. Constitution Judiciary Act 1789
provides that "the judicial power of the United States shall be vested in one Supreme Court, and in such inferior [lower] courts as the Congress may from time to time establish." Judiciary Act 1789 First Congress set up a system of federal courts Jurisdiction = The authority to interpret and administer the law; also, the range of that authority. original jurisdiction first courts in which most federal cases are heard appellate jurisdiction review decisions made by lower courts

5 Cases Tried in Federal Courts
any person accused of disobeying any part of the U.S. Constitution, including its amendments anyone accused of violating a U.S. treaty anyone accused of breaking laws passed by Congress charges brought by a foreign country against the U.S. government or a U.S. citizen crimes committed on U.S. ships at sea ambassadors and consuls accused of breaking the laws of the country in which they are stationed crimes committed on certain types of federal property disagreements between the states the Eleventh Amendment provides that any lawsuit against a state brought by a citizen of another state or of a foreign country shall be tried in a state court lawsuits between citizens of different states most federal court cases are of this type

6 Lowest Courts district courts base of the federal court system
94 federal district courts in the United States and its territories at least one district court in each of the 50 states and in the District of Columbia some states are divided into as many as four federal court districts, each with its own district court only federal court in which jury trials are held have original jurisdiction in most federal cases cannot hear appeals from other courts federal trial venue (location) trial must be held in the state where the crime was committed ensures that the accused person receives a fair and convenient trial witnesses who will testify are usually close at hand no one has to travel long distances to be heard jury will be familiar with the location of the crime location can be changed if an impartial jury will be difficult to seat ex: Oklahoma City bombing of Murrah Building trial moved from traumatized Oklahoma to Denver, Colorado

7 District Court Officials
district judges each district court has from 1 to 28, depending on the caseload appointed for life by the president and approved by the Senate decide matters of court procedure explain the law involved in a case to the jury decide the punishment if the accused person is found guilty U.S. marshals arrest persons accused of breaking federal laws deliver subpoenas official court orders that require persons to appear in court keep order in the district courtrooms see that the courts' verdicts are carried out magistrate judges hear the evidence against accused persons and decide whether the cases should be brought before a grand jury also hear some minor cases U.S. attorneys lawyers for the federal government prove to a jury that the accused person is guilty of the federal crime

8 Middle Courts circuit courts of appeals
review cases that are appealed from the district courts hear appeals of federal regulatory commission decisions 12 U.S. courts of appeals each court of appeals covers a large judicial district known as a circuit the 50 states are divided into 11 circuits twelfth circuit is the District of Columbia each appeals court has between 6 and 28 judges appointed for life by president and approved by Senate chief judge judge of each circuit who has served the longest and is under 65 years old no jury trials panel of at least three judges makes the decision by majority vote examine the records of the district court trial hear arguments by the lawyers for both sides determine if the appellant was granted full legal rights during the trial do not determine whether the accused person is guilty or innocent may send the case back to the district court for a new trial - remand may uphold the district court's decision - affirm

9 The Highest Court U.S. Supreme Court
highest court in the land meets in Washington, D.C. works chiefly as an appeals court reviews cases that were tried in lower federal courts reviews cases that were tried in state courts decisions are final and cannot be appealed Supreme Court has original jurisdiction in three types of cases cases involving diplomatic representatives of other countries cases involving disputes between states such as a dispute between Arizona and California over the use of water from the Colorado River basin cases involving a state and the federal government the ownership of public lands has often been a source of conflict between the states and the federal government 9

11 Special Federal Courts
Court of Federal Claims hears cases involving money claims (lawsuits) against the federal government if the court rules against the government, the person bringing the suit is usually granted a sum of money Congress must then authorize the payment of the claim U.S. Court of International Trade hears cases involving taxes on imports people who think that the tax on their imported goods is too high located in New York City also hears cases in other port cities 11

12 Special Federal Courts
Territorial Courts administer justice to the people living in U.S. territorial possessions one territorial court in each of the following U.S. territories Northern Mariana Islands, Guam, the Virgin Islands, Puerto Rico handle the same kinds of cases as district courts also hear the types of cases that would go to a state court U.S. Tax Court hears appeals from taxpayers who disagree with rulings of the Internal Revenue Service (IRS) concerning their payment of federal taxes does not handle charges of tax delinquency or evasion these are criminal charges actually an independent agency but it has the powers of a court 12

13 Special Federal Courts
Court of Appeals for the Armed Forces appeals court for the country's armed services people in the armed services who are accused of breaking a military law are tried at a court-martial trial conducted by military officers judge, lawyers, and jury are all members of the military consists of five civilian judges appeals of this court's decisions can be, but rarely are, heard by the Supreme Court U.S. Court of Appeals for Veterans Claims hears appeals brought by military veterans against the Department of Veterans Affairs always involve claims for veterans benefits 13

14 Federal Judges preside over all the federal courts
Supreme Court members are called justices appointed by the president approved by the Senate by a majority vote appointed for life except judges who preside over territorial courts can be removed from office only by impeachment can leave office by promotion, retiring, resigning, or death Congress may not lower a judge's salary during her or his time in office ensures that judges are not punished or rewarded for their decisions in cases assisted in their work by many other people law clerks and court reporters 14 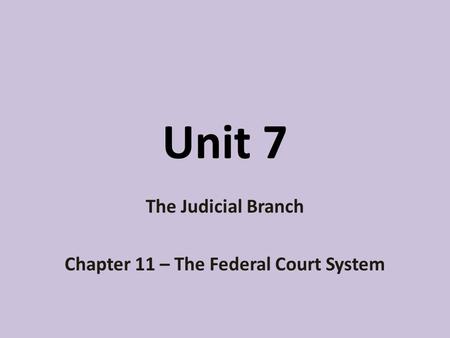 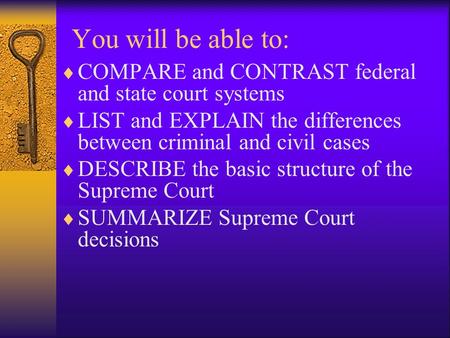 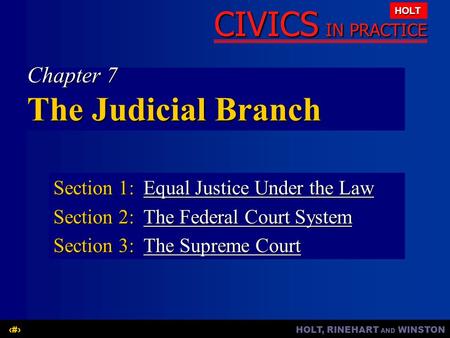 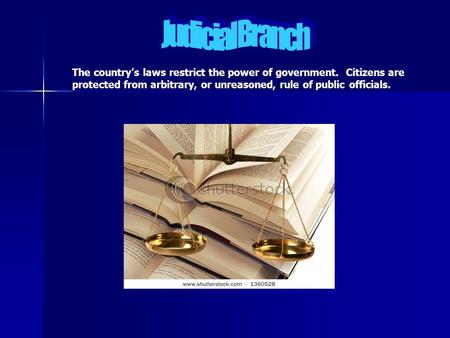 Judicial Branch The country’s laws restrict the power of government. Citizens are protected from arbitrary, or unreasoned, rule of public officials.