1 Wilfred Owen By Austin and Shane
Bent double, like old beggars under sacks, knock-kneed, coughing like hags, we cursed through sludge, till on the haunting flares we turned our backs and towards our distant rest began to trudge. Men marched asleep. Many had lost their boots but limped on, blood-shod. All went lame; all blind; drunk with fatigue; deaf even to the hoots of disappointed shells that dropped behind. Gas! Gas! Quick, boys!-- An ecstasy of fumbling, fitting the clumsy helmets just in time; but someone still was yelling out and stumbling and floundering like a man in fire or lime.-- Dim, through the misty panes and thick green light as under a green sea, I saw him drowning. In all my dreams, before my helpless sight, he plunges at me, guttering, choking, drowning. If in some smothering dreams you too could pace behind the wagon that we flung him in, and watch the white eyes writhing in his face, his hanging face, like a devil's sick of sin; if you could hear, at every jolt, the blood come gargling from the froth-corrupted lungs, obscene as cancer, bitter as the cud of vile, incurable sores on innocent tongues,-- my friend, you would not tell with such high zest to children ardent for some desperate glory, the old lie: dulce et decorum est pro patria mori By Austin and Shane

3 Thoughts during WWI Many civilians were influenced by the propaganda used during the time. People, such as the author, were convinced to enlist. Citizens often joined at the hate of Germany. The poem doesn’t express the thoughts of the citizens in the beginning but rather the thoughts of the soldiers during combat. The poem contradicts the popular belief that dying for ones country is glorious.

4 Biography Was born in Shropshire in 1893 and was educated at Birkenhead Institute and Shrewsbury Technical College.  Wilfred knew he wanted to be a poet from the age of 19 but he didn’t write any poetry of importance until he saw action in France in In 1913 to worked as a language tutor, but was pressured by propaganda to become a soldier during World War 1. He was soon transported to the front line where he dodged bullets until he was killed 7 days before the end of the war.

5 Connection The poem and the song both have the same theme.
They contain misconceptions. In lines of the song, there is a comparison of success, in the end, being worthless. This relates to Owen's poem because it explains the horrors of fighting a war. The author was a volunteer. He was not drafted. Line 55 of the song says “I've put my trust in you,” which can be compared to the propaganda during war time to convince citizens to join the fight. The poem then goes on to explain in lines “To children ardent for some desperate glory, the old lie: Dulce et decorum est pro patria mori.” which means that the trust, put in to propaganda to promote the war effort, is not as it seems and has a misconception.

6 5 Poetic Devices Oxymoron- “In all my dreams, before my helpless sight, he plunges at me , guttering, choking, drowning.” the use of “dreams” and “helpless sight” are opposites because a helpless sight is not a dream. Diction- “Drunk with fatigue; deaf even to the hoots of tired, of outstripped Five-Nines that dropped behind.” The poet deliberately uses the length of the war and show how tired everyone is. Simile- “but someone still was yelling out and stumbling and flound’ring like a man on fire because he failed to get his gas mask on time. Foreshadowing- “Distant rest”, in line 4, foreshadows the death of the soldiers at the end of the poem. Irony- “To children ardent for some desperate glory, The old lie: Dulce et decorum est pro patri mori.” The last line of the poem is ironic because what is often seen as honorable to the children is actually horrible.

7 Theme The poem takes the actions of WWI and portrays them as horribly as possible to make a point that the war , and dying for your country, is not good as It’s made out to be. These are the feelings of the soldiers during the war. Once they experienced war their view of it changed. 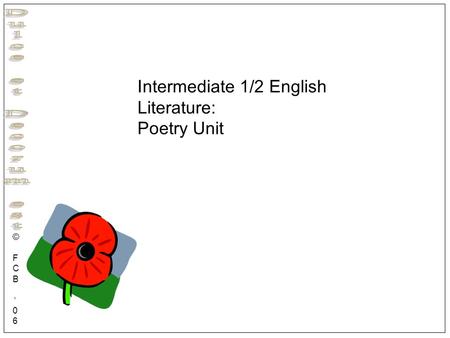 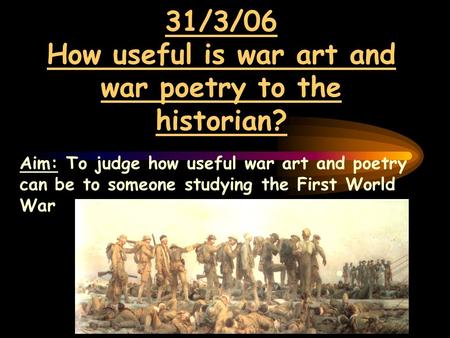 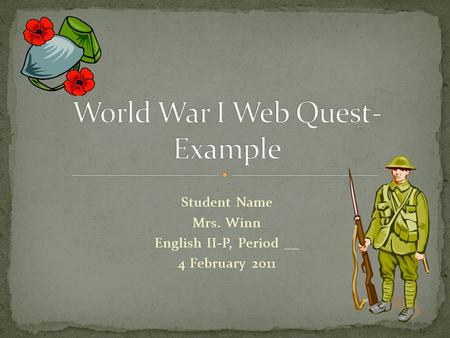 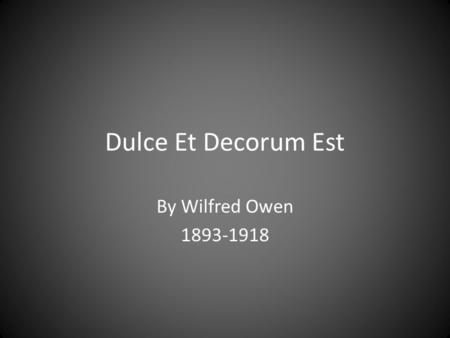 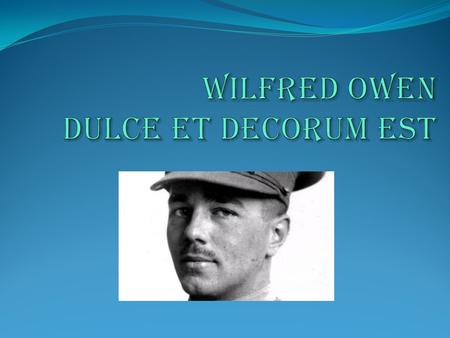 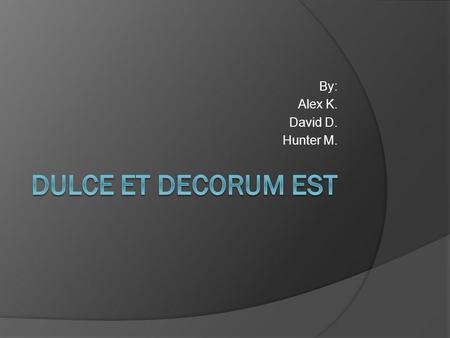 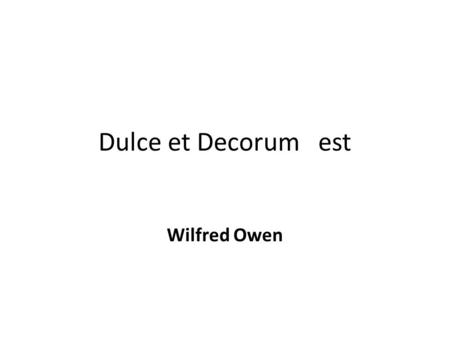 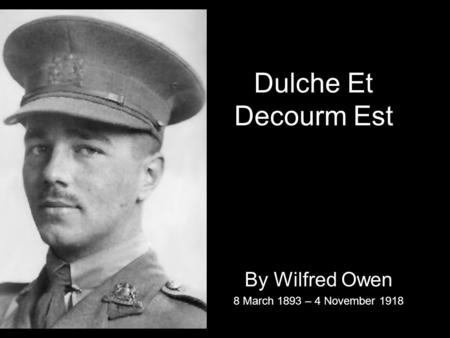 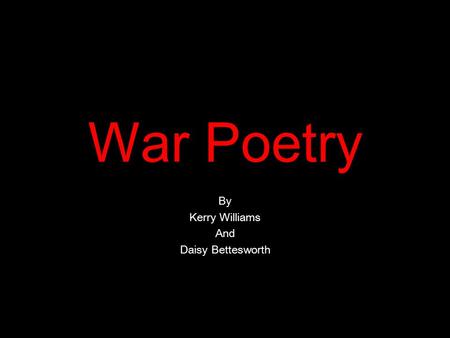 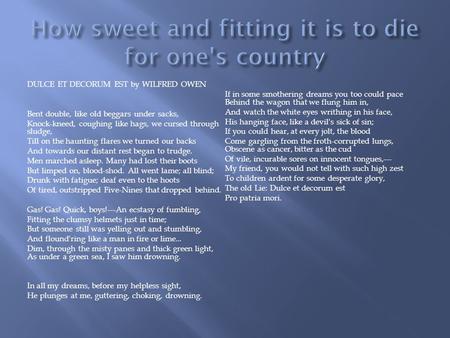 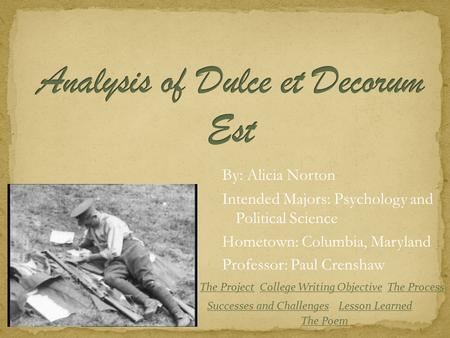 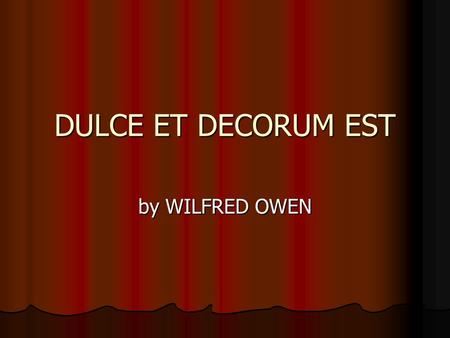 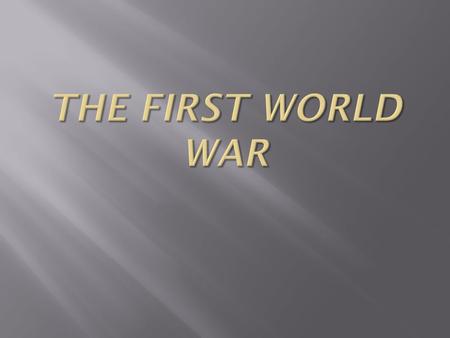 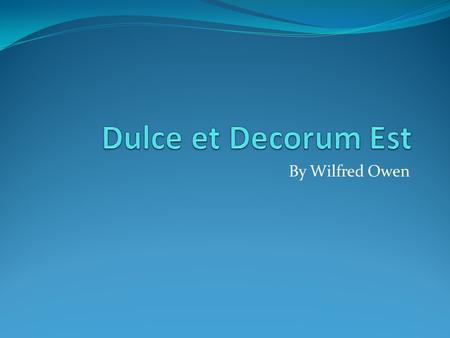 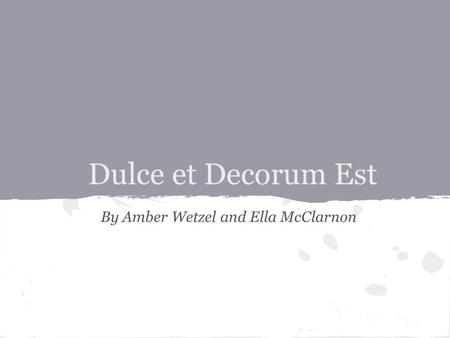 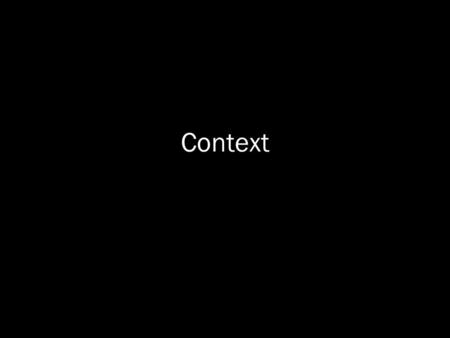 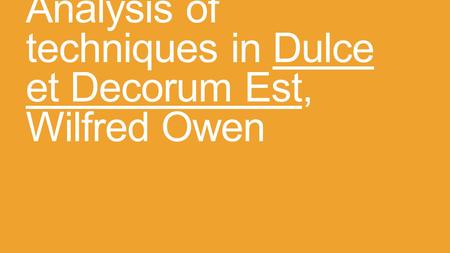 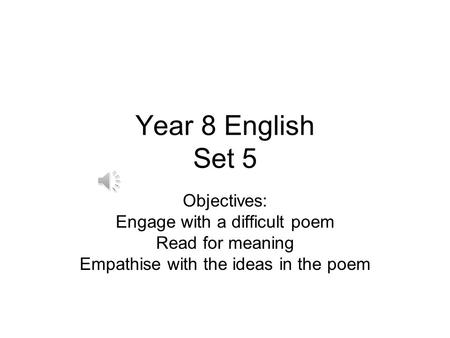