4 Science Behind GM FOODS
The science behind GM Foods is biotechnology —the use of modern genetics to improve plants, animals, and microorganisms for food production. The concept with living things is is almost as old as agriculture itself. The first baker who used yeast to make bread rise was like using a living thing to produce an product. The one feature common to these traditional techniques was the use of natural processes to bring about changes in foods.

5 Saves the usage of toxic chemicals
Saves the usage of toxic chemicals. GM crops can be made resistant to pests, so pesticides do not need to be sprayed on them. This is also better on the environment! Prevents wasted crops. If pests cannot eat the crops, nothing goes to waste. Therefore, farmers make more money. Advantages of gm foods Some foods can be genetically modified to contain higher amounts of important vitamins and minerals. In Africa 500,000 people get blind each year. If rice can be modified to contain more Vitamin A the amount of people going blind will decrease. Can grow food in different conditions. For instance, strawberries can be engineered to grow in frosts. Foods that grow in the cold climate can then be grown in the hot climate. It can solve hunger. Many people agree that there is not enough food in the world to feed everyone. As GM Foods increase crops more food is produced by farmers.

6 Disadvantages of gm foods
Changing plants may have lasting effects on organisms. The change in plant may be toxic to an insect or animal that uses it as its main food source. As a ring of nature chain insects may be influenced by GM Foods. Disadvantages of gm foods When genetically altered microorganisms are consumed with food products, they may put together with human and animal organism. They’re combination may cause depredation, metamorphosis, or any other strange organisms. A huge concern is that genetic modification could cause allergies in humans due to modification of plants. People may find out that they are now allergic to other food products –because they contain a gene from the allergy they have. -Even foods that carry toxic genes can cause human illness. -Other organisms in the same medium may be influenced by GM Foods.

7 GM Foods Effects on Humans
Allergic Reaction. The transfer of genes fro allergic food is discouraged unless it can be demonstrated the protein of the transferred gene is not allergic. Gene Transfer. Gene transfer from GM foods to cells of the body or to bacteria would cause concern if the transferred gene material affects human health. GM Foods Effects on Humans Outcrossing. The movement of genes from GM plants into conventional crops or related species in the wild.

8 This is my presentation about GM Foods! :D 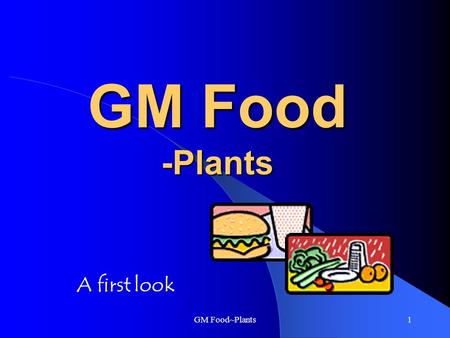