Presentation on theme: "Literary Terms in The Power of One and Pride and Prejudice"— Presentation transcript:

1 Literary Terms in The Power of One and Pride and Prejudice
English 4 Mrs. La Morte August 15, 2011

2 Characterization The process by which the writer reveals the personality of a character. 1. By telling us directly what the character is like: humble, ambitious, impetuous, easily manipulated, and so on. 2. By describing how the character looks and dresses 3. By letting us hear the character speak 4. By revealing the character’s private thoughts and feelings

4 Characterization continued again…
Indirect characterization– the reader has to use their own judgment and put clues together to figure out what a character is like—just as we do in real life when we are getting to know someone. Static character- one who does not change much in the course of a story.

5 You guessed it! Characterization…
Dynamic character changes in some important way as a result of the story’s action. Flat/Round-- flat characters have only one or two personality traits. Round characters have more dimensions to their personalities-they are complex, solid and multifaceted, like real people.

6 Point of View The vantage point from which a writer tells a story. There are three main points of view first-person, limited third-person, and omniscient third-person. First-person pov- the narrator is a character in the story. Using the pronoun I, this narrator tells us his or her own experiences but cannot reveal any other character’s private thoughts. May or may not be objective…so we may have to interpret what the narrator says.

7 Point of View again… Limited third-person point of view– the narrator is outside the story, like an omniscient narrator—but tells the story from the vantage point of only one character. The narrator can enter the mind of this chosen character, but cannot tell what any other characters are thinking except by observation. This narrator can also only go where the chosen character goes.

8 Point of View…last one, I promise!
In the omniscient point of view, the person telling the story knows everything that’s going on in the story. This omniscient narrator is outside the story, a godlike observer who can tell us what all the characters are thinking and feeling, as well as what is happening anywhere in the story.

10 Dialogue Conversation between two or more people.
Writers use dialogue to advance the action of a plot, to present an interplay of ideas and personalities, and to reveal the background, occupation, or social level of the characters through tone and dialect.

12 Symbol A person, place, thing or event that stands both for itself and for something beyond itself.

13 Tone The attitude a writer takes towards the reader, a subject or a character. Tone is conveyed through the writer’s choice of words and details.

14 Theme The central idea or insight of a work of literature. A theme is not the same as the subject of a work, which can usually be expressed in a word or two: old age, ambition, love. The theme is the idea the writer wishes to convey ABOUT that subject the writer’s view of the world or revelation about human nature. Themes are usually implied. It is up to the reader to piece together all the clues the writer has provided about the work’s total meaning.

15 Bildungsroman (Bill-dungs-row-mon)
A novel about the moral and psychological growth of the main character The goal is maturity, and protagonist achieves it gradually and with difficulty. Often features a main conflict between the main character and society.

16 Social Satire Social satire is a piece of literature, or some other form of expression such as a cartoon or song, that reflects on a (while criticizing or poking fun at a) specific time period or group of people and certain lifestyles, morals, and beliefs of that group.

17 Novel of Manners A literary genre that deals with aspects of behavior, language, customs and values characteristic of a particular class of people in a specific historical context. Often shows a conflict between individual aspirations or desires and the accepted social codes of behavior. There is a vital relationship between manners, social behavior and character. Downplays physical appearances.

18 Novel of Manners continued…
Characters in the novels are not always morally and socially obliging to each other. There is a differentiation between the upstanding hero or heroine and the socially less acceptable characters. The different degrees of how the characters uphold the standard level of social etiquette is what usually dominates the plot of the novel. 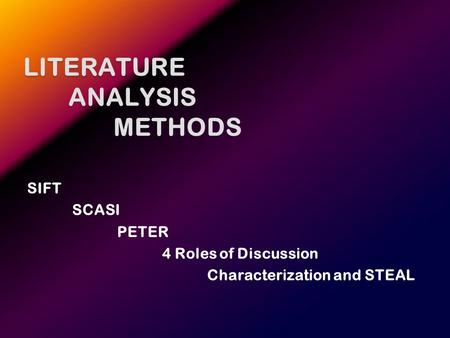