Presentation on theme: "The Beginnings of the Women’s Rights Movement"— Presentation transcript:

1 The Beginnings of the Women’s Rights Movement
Based on yesterday’s discussion what does this cartoon suggest about the role of women in 1800’s society? Devotes her time to gossip and clothes. Because she has nothing else to talk about. Give her broader interests and she will <blank> to be vain and frivolous. What is the difference in the cartoon on the top and the one on the bottom?

3 What was the role of women in society prior to 1800?
When they did work, women were paid less than men doing the same jobs, and their fathers or husbands often took what money they did earn Married women lost legal control of any money or property they owned before marriage to their husbands.

4 What was the role of women in society prior to 1800?
Married women could not testify against their husbands in court, sue for divorce, or gain custody of their children English common law allowed a husband to give his wife a severe beating with whips and clubs.  In 1856, a Protestant sect defended the practice of wife-beating as an “article of faith.”  As civilization progressed, communities set limits on the beating of women and children.  Blows, thumps, kicks, or punches were limited to the back because they did not leave any visible marks.  Only when the attacks were public and beyond the limits set by the community was the husband rebuked.  Finally in 1874, the North Carolina Supreme Court nullified a husband’s right to chastise his wife “under any circumstances.”  But the law included, “if no permanent injury has been inflicted, nor malice, cruelty, nor dangerous violence shown by the husband, it is then better to draw the curtains, shut out the public gaze, and leave the parties to forgive and forget.”

5 What was happening in the early 1800’s that caused a desired shift in women’s role?
The Second Great Awakening led women to take on more active roles in public life. Protestant revival movement. Baptist and Methodist religions experience a boom. More women convert to these religions than men. Efforts to apply Christian teaching to the resolution of social problems presaged the Social Gospel of the late 19th century. Converts were taught that to achieve salvation they needed not just to repent personal sin but also work for the moral perfection of society, which meant eradicating sin in all its forms. Thus, evangelical converts were leading figures in a variety of 19th century reform movements. Women were the ones that voluntarily set up new organizations to lead to moral reforms. Their targets were abolition and temperance. The Female Missionary Society and the Maternal Association, both active in Utica, NY, were highly organized and financially sophisticated women’s organizations responsible for many of the evangelical converts of the New York frontier. Church membership and religious activity gave women peer support and place for meaningful activity outside the home

6 What was happening in the early 1800’s that caused a desired shift in women’s role?
Women Enter the workplace New mills and factories needed workers and women answered the call.

7 What was happening in the early 1800’s that caused a desired shift in women’s role?
Many urban middle-class northern women begin to hire poor women to do their housework. Allows the middle-class women more time to think about the society in which they wanted to raise their children

10 “The investigation of the rights of the slave has led me to a better understanding of my own…Human beings have rights, because they are moral beings…If rights are founded on the nature of our moral being, then the mere circumstance of sex does not give to man higher rights and responsibilities, than to woman.”– Angelina Grimké Who was Angelina Gimké? There two sisters published their ideas on women’s rights. In Letters on the equality of the Sexes and the Condition of Women Sister, Sarah, argued that God made men and women equal and that therefore men and women should be treated equally.

12 Social Issues of the 1800’s Temperance How did male use of alcohol affect women?

13 Elizabeth Cady Stanton
Two women that begin to call for change Lucretia Mott Elizabeth Cady Stanton Mott was a Quaker and abolitionist…she and Stanton met in London when Mott attempted to speak at the World’s Anti Slavery convention in London 1848. Stanton was formally educated and a daughter of a judge. She could not go onto college like the others she went to school with. Her husband Harry does not support women’s suffrage. Lucretia and James Mott visited central and western New York in the summer of 1848 for a number of reasons, including visiting the Cattaraugus Reservation of the Seneca Nation and former slaves living in the province of Ontario, Canada. Mott was present at the meeting in which the Progressive Friends left the Hicksite Quakers. They also visited Lucretia's sister Martha Coffin Wright in Auburn, NY, where Mott also preached to prisoners at the Auburn State Penitentiary. Lucretia Mott's skill and fame as an orator drew crowds wherever she went After Quaker service on Sunday July 9, 1848, Lucretia Coffin Mott joined Mary Ann M'Clintock, Martha Coffin Wright (Mott's witty sister, several months pregnant),[20] Elizabeth Cady Stanton and Jane Hunt for tea at the Hunt home in Waterloo. The two eldest M'Clintock daughters, Elizabeth and Mary Ann, Jr. may have accompanied their mother.[21] Jane Hunt had given birth two weeks earlier, and was tending the baby at home. Over tea, Stanton, the only non-Quaker present, vented a lifetime's worth of pent-up frustration, her "long-accumulating discontent"[22] about women's subservient place in society. The five women decided to hold a women's rights convention in the immediate future, while the Motts were still in the area,[23] and drew up an announcement to run in the Seneca County Courier. The notice specified that only women were invited to the first day's meetings on July 19, but both women and men could attend on the second day to hear Lucretia Mott speak, among others.[23] On July 11, the announcement first appeared, giving readers just eight days' notice until the first day of convention.[24] Other papers such as Douglass's North Star picked up the notice, printing it on July 14.[23] The meeting place was to be the Wesleyan Methodist Chapel[25] in Seneca Falls. Built by a congregation of abolitionists and financed in part by Richard Hunt,[8] the chapel had been the scene of many reform lectures, and was considered the only large building in the area that would open its doors to a women's rights convention.[23]

14 Seneca Falls Convention
The Quaker religious influence of the region is important to note. These Quakers strove for marital relationships in which men and women worked and lived in equality.[8]

15 Seneca Falls Convention
Frederick Douglass was an African-American social reformer, orator, writer and statesman. After escaping from slavery, he became a leader of the abolitionist movement, gaining note for his dazzling oratory and incisive antislavery writing.

16 The Declaration of Sentiments
The document was modeled in the same language as the Declaration of Independence It was ridiculed The convention itself resulted in few concrete improvements in women’s rights… But it marked the beginning of the Women’s rights movement in the United States What does suffrage? The right to vote in political elections

17 Key ladies in the early women’s rights movement
Margaret Fuller A literary and philosophical movement, associated with Ralph Waldo Emerson and Margaret Fuller, asserting the existence of an ideal spiritual reality that transcends the empirical and scientific and is knowable through intuition. A transcendentalist that believed women’s powers of intellect were equal to those of men. Any woman should be able to pursue any career they choose. She believed what women needed was “as a soul to live freely and unimpeded.”

18 Key ladies in the early women’s rights movement
Amelia Bloomer A young woman inspired by the Seneca Falls convention. She published a newspaper, The Lily. She advocated for equality of women in all things; including the right to wear pants!

19 Key ladies in the early women’s rights movement
Susan B. Anthony Quaker Father abolitionist Was a teacher Moved to Rochester in 1849 Met Stanton and Bloomer in Seneca Falls in 1851 Spent 50 years fighting for the right to vote. With Stanton she forms the National Women Suffrage Association (NWSA) to fight for the right to vote. Anthony would help lead the charge to win a single, critical right for women: the right to vote!

Download ppt "The Beginnings of the Women’s Rights Movement" 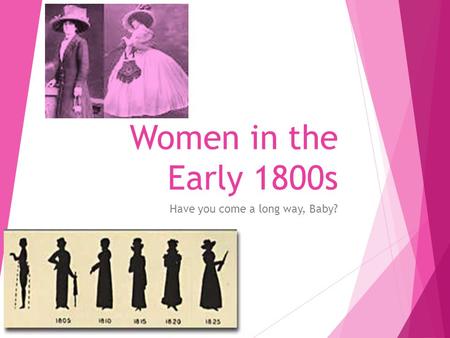