4 January 2010 doc.: IEEE /0073r0 March 2010 Group ID Definition A group ID (y bits) is used to specify a group of K MU-MIMO users in a specified order Group ID is defined by AP and is communicated to STAs Group ID may be transmitted within the body of a management frame Management frame may be a sounding frame or a non-sounding frame Management frame without sounding may be used to indicate AID list for a Group ID without requesting channel measurement feedback frame (when the management frame transmitter already has CSI information) A group ID is modified or created by transmitting group-definition-field See next slide Group ID may be overloaded. AP may assign same Group ID to mutually exclusive sets of users if necessary A station can be member of up to 2^y groups Joonsuk Kim, Broadcom Corp. Joonsuk Kim

6 An Example of Sounding Mechanism
March 2010 An Example of Sounding Mechanism Sounding AP In sounding packet, four AIDs are included in MAC header or DATA. Each AID represents MAC address to sound for MU-MIMO From this order, each destination STA knows the assigned number (1 to 4) STA1 STA2 STA3 STA4 MU-MIMO Packet time Group-definition-field in DATA or MAC header Group-ID-field in VHT-SIG A Feedback Frames - Details are TBD - Sounding packet includes the MAC addresses of recipients to sound (possible candidates for MU-MIMO packet recipients) The order of AIDs (Associated ID) in Group-definition-field in the PHY payload indicates the station number (1 to 4). AP will choose the participating STAs for MU-MIMO packet based on available downlink traffic and current channel state information for all the STAs All of STAs that were included in Group-definition-field are not required to be recipients of MU-MIMO packet. Joonsuk Kim, Broadcom Corp.

7 Stream Number Indication in VHT-SIG A [1]
March 2010 Stream Number Indication in VHT-SIG A [1] VHT-SIG A tells the number of columns of Qk (steering matrix for user k) in the order of assigned user number in the group-definition-field. All STAs can listen to VHT-SIG A, so each participating user knows when to start to detect its own stream. VHT-SIG A may include following field (called GroupID field) Some of these bits may be reused for SU-MIMO packet y bits x bits Group ID # of columns of Qk (Nsts_k) for k=1,2,3,4 Qk is the steering matrix for user k x>0, y >0 x bits indicate the number of columns of Nsts for user 1,2,3 and 4. Details are TBD It is possible Nsts_k = 0 for certain k if STA k is not a recipient of MU-MIMO packet. Joonsuk Kim, Broadcom Corp.

8 March 2010 Summary MU-MIMO with resolvable LTFs requires a mechanism to indicate which streams are for which user. Group ID field in VHT-SIGA is introduced for this information Group ID can be announced when a sounding frame is sent, so it does not require significant extra network overhead. PHY adhoc group already approved to adopt this concept last January meeting [2]. Joonsuk Kim, Broadcom Corp. 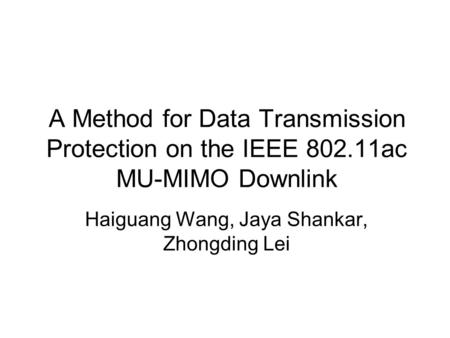 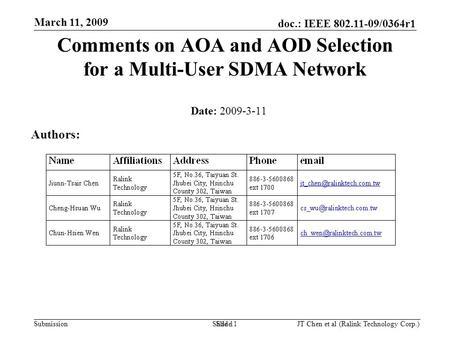 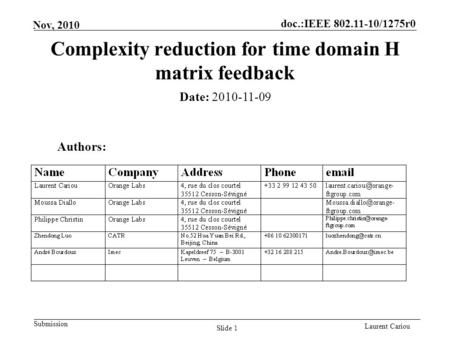 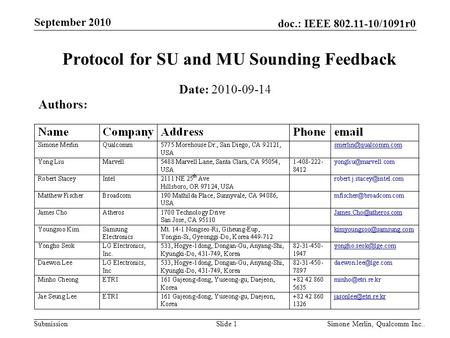 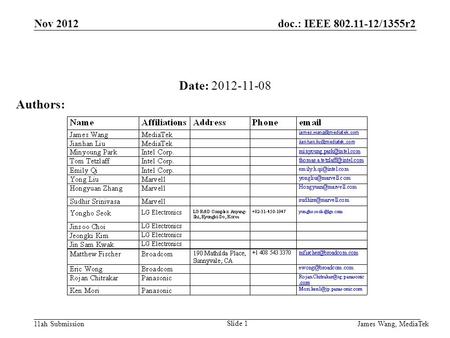 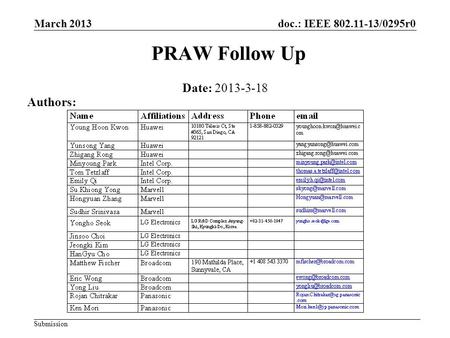 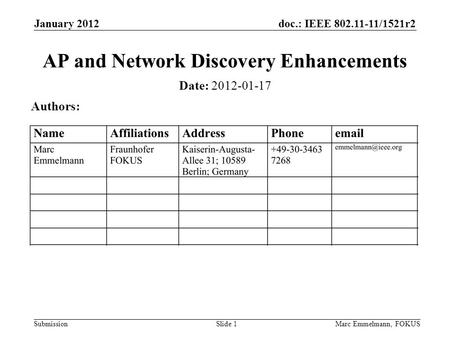 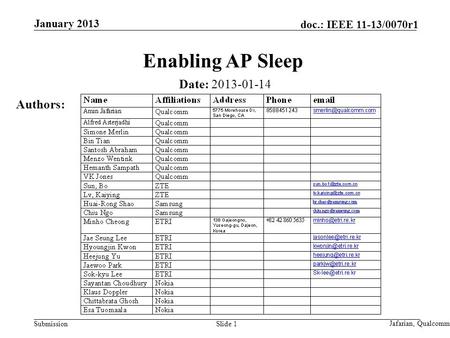 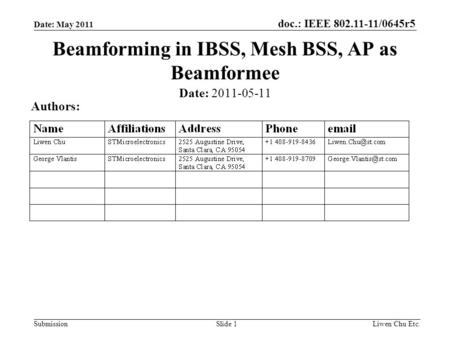 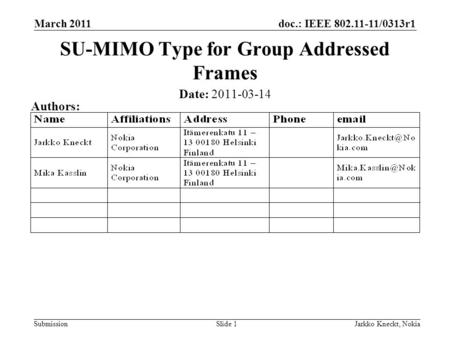 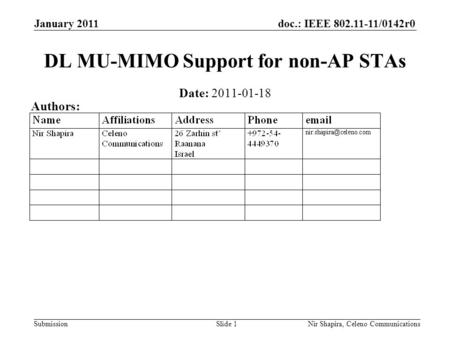 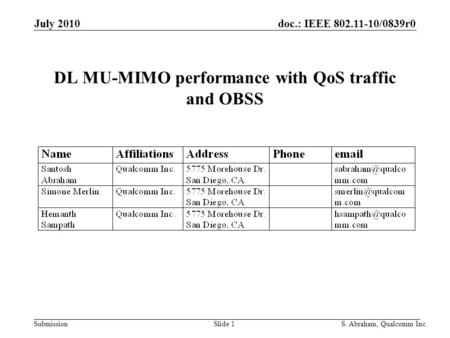 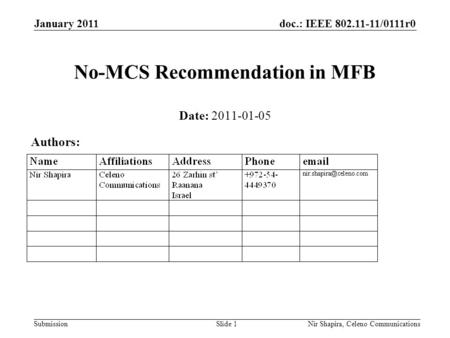 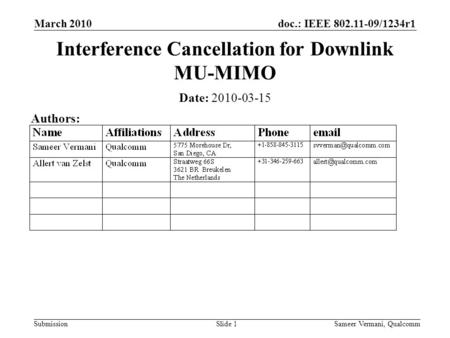 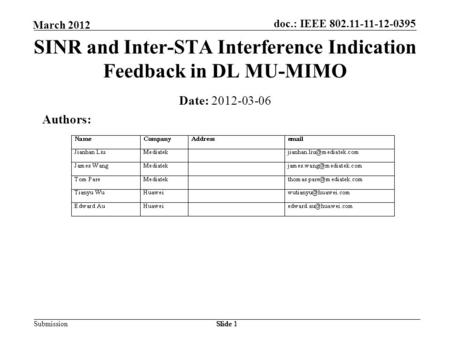 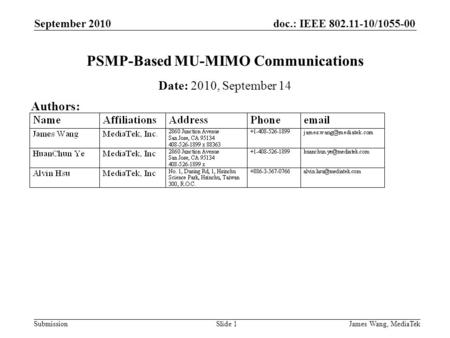 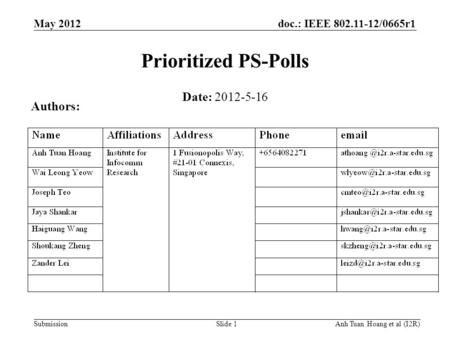 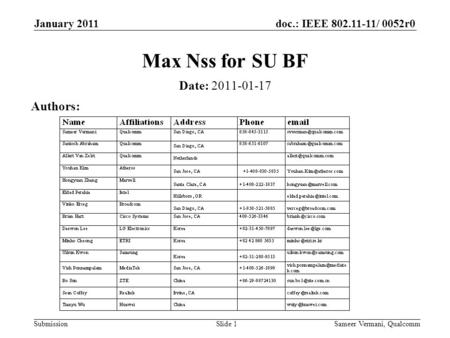