2 What is a Biome? Biomes are large regions characterized by a specific type of climate and certain types of plant and animal communities. Each is made up of many different ecosystems.

5 Biomes and Vegetation Biomes are described by their vegetation.
Plants in a Biome have adaptations to their environment. Examples – size, shape and color

6 Biomes and Climate Climate is the average weather conditions in an area over a long period of time. It determines which plants grow in an area. Temperature and precipitation are the 2 most important factors that determine a region’s climate.

10 A World Rich in Biodiversity
Certain areas of the planet, such as tropical rainforests, contain an extraordinary variety of species. Humans need to understand and preserve biodiversity for our own survival. Every species is probably either dependent on or depended upon by at least one other species in ways that are not always obvious. When one species disappears from an ecosystem, a strand in a food web is removed. 10

11 Biodiversity at Risk The extinction of many species in a relatively short period of time is called a Mass Extinction. Earth has experienced several mass extinctions, each probably caused by a global change in climate. It takes millions of years for biodiversity to rebound after a mass extinction. 11

12 How Do Humans Cause Extinctions
In the past 2 centuries, human population growth has accelerated and so has the rate of extinctions. The major causes of extinction today are the destruction of habitats, the introduction of nonnative species, pollution, and the overharvesting of species. Poaching is the illegal harvesting of fish, game, or other species. 12

14 Invasive Exotic Species
An exotic species (invasive) is a species that is not native to a particular region. Even familiar organisms such as cats and rats are considered to be exotic species when they are brought to regions where they never lived before. Exotic species can threaten native species that have no natural defenses against them. 14

16 Pollution Pesticides, cleaning agents, drugs, and other chemicals used by humans are making their way into food webs around the globe. The long term effects of chemicals may not be clear until after many years. The bald eagle was endangered because of a pesticide known as DDT. Although DDT is now illegal to use in the United States, it is still manufactured here and used around the world. 16

17 Balancing Human Needs Attempts to protect species often come into conflict with the interests of the world’s human inhabitants. An endangered species might represent a source of food or income. Or a given species may not seem valuable to those who do not understand the species’ role in an ecosystem. Many conservationists feel than an important part of protecting species is making the value of biodiversity understood by more people. 17 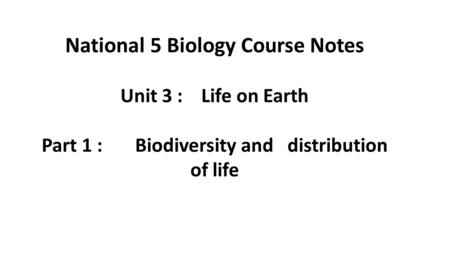 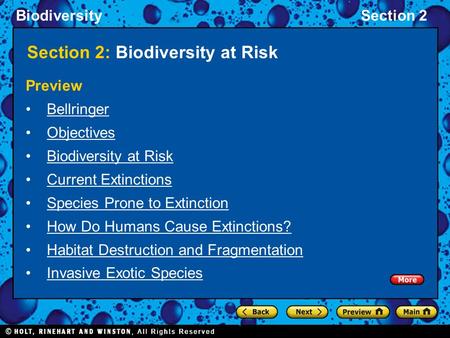 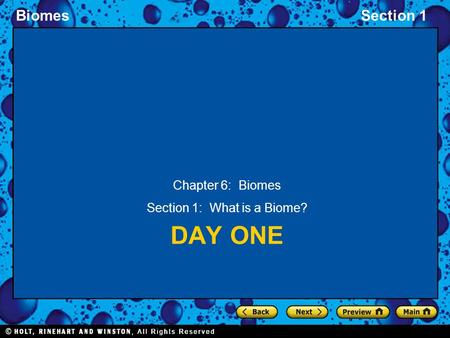 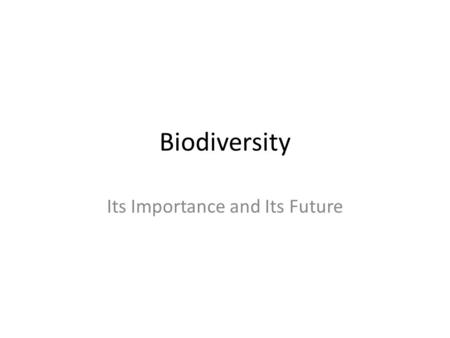 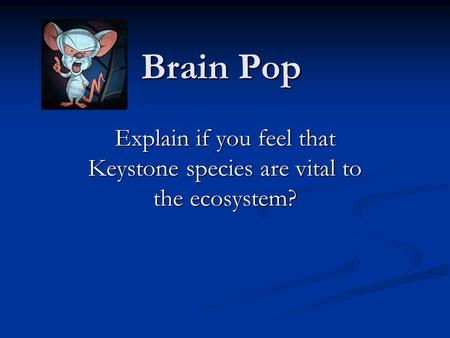